In Microsoft Excel, you might be well aware of the VLOOKUP function whereas the addition of the XLOOKUP function in Excel 365 has a greater possibility to surpass the former one considering the user-friendliness. In this article, you’ll have a detailed overview of the comparisons between these two useful lookup functions: XLOOKUP and VLOOKUP with suitable examples and appropriate illustrations.

Basics of XLOOKUP and VLOOKUP in Excel

The XLOOKUP function searches a range or an array for a match and returns the corresponding item from the second range or array. By default, an exact match is used. The generic formula of this function is as follows:

5 Comparative Examples between the Uses of XLOOKUP and VLOOKUP

Let’s go through some examples now to find out how these two functions are similar or different from each other. You’ll also get to know where you should use the VLOOKUP or XLOOKUP function while working with your dataset.

1. XLOOKUP and VLOOKUP to Lookup Unique Value and Extract Data

In the following picture, a dataset is presented with several popular smartphone devices and their specifications. By using VLOOKUP and XLOOKUP functions here separately, we’ll see how these functions work out to extract unique data based on a specified lookup value.

For example, we’re going to extract the specifications of the Samsung S21 Ultra from the data table. 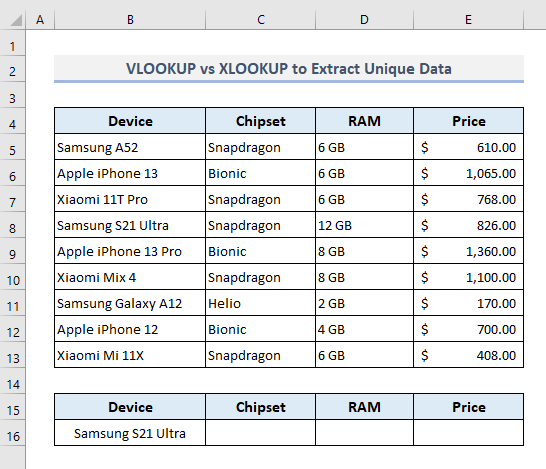 We’re going to apply the VLOOKUP function first. In the output Cell C16, the required formula will be:

After pressing Enter, you’ll get all the information for the specified smartphone available in the table. 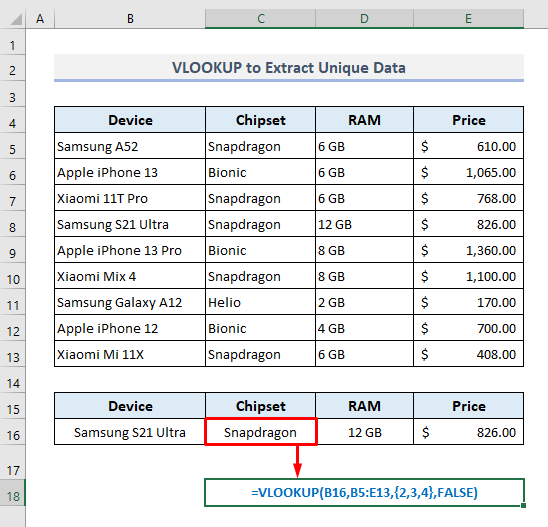 Now, if we use the XLOOKUP function instead of the VLOOKUP function, the output Cell C16 will be embedded by the following formula:

After pressing Enter, you’ll get a similar result as found with the VLOOKUP function. 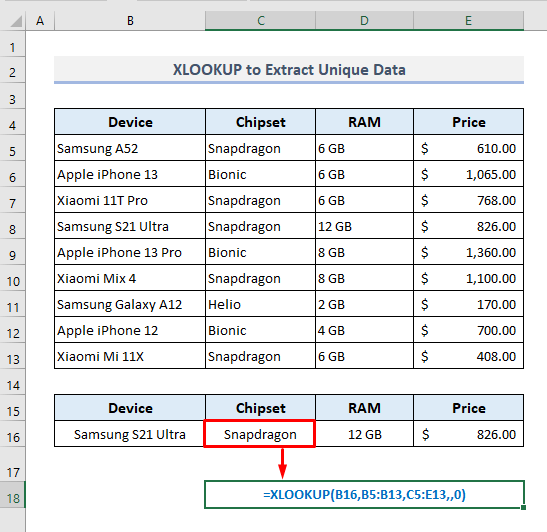 So, the basic difference between using these two functions is the VLOOKUP function has extracted multiple values based on the specified column numbers in an array whereas, the XLOOKUP function has returned a similar output by taking a range of cells containing the specifications as return array argument.

2. VLOOKUP is Unable to Show Message If Lookup Value Is Not Found

Assuming that we’re going to find the specifications of the Xiaomi Mi 10 Pro in the following table. 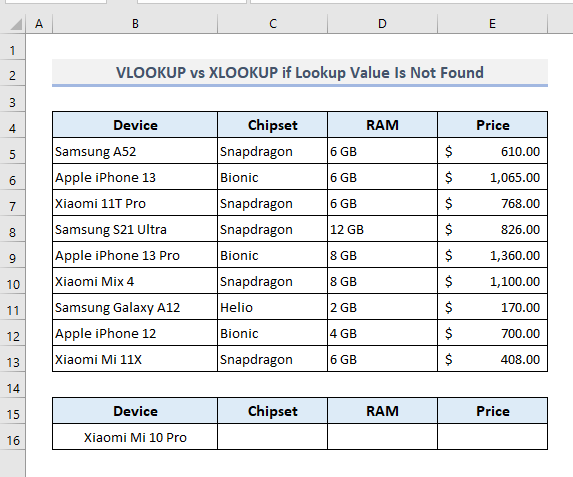 As the lookup value is lying in Cell B16, the required formula with the VLOOKUP function in the output Cell C16 will be:

After pressing Enter, the function will return a #N/A error as the lookup value is not available in the data table. 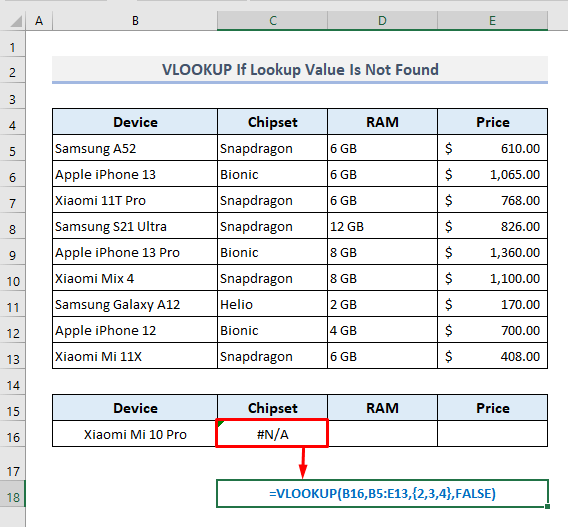 Now if you customize a message with the XLOOKUP function if the lookup value is not found then the required formula in Cell C16 could look like this:

After pressing Enter, the function will return the specified message: “Not Found”. 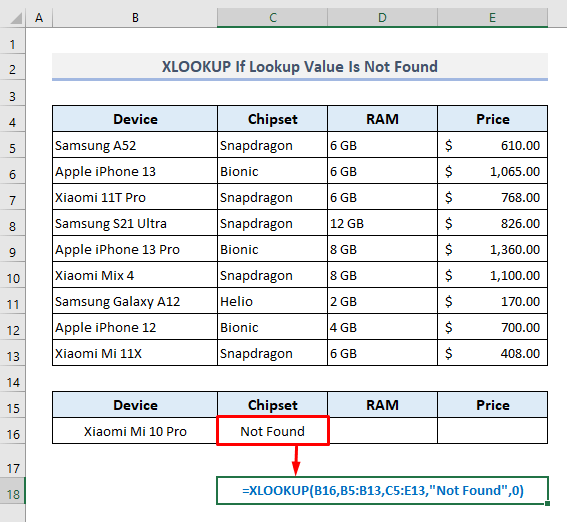 3. VLOOKUP Searches for Value in the Leftmost Column Only

In the following picture, the dataset has been modified a bit. The column containing the device names has been shifted to the end of the data table. As we know, the VLOOKUP function searches for a lookup value in only the leftmost column in a table, now we’ll find out the output the function will return if we look for a value in the rightmost column in the table. 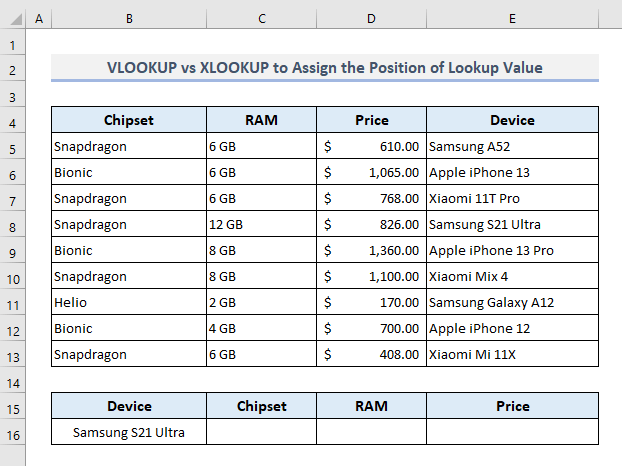 The required function in Cell C16 will be:

After pressing Enter, you’ll find a #N/A error as the return output. So, it’s now understood that while using the VLOOKUP function, you have to look for a value only in the leftmost column, otherwise, the function will not display the expected result. 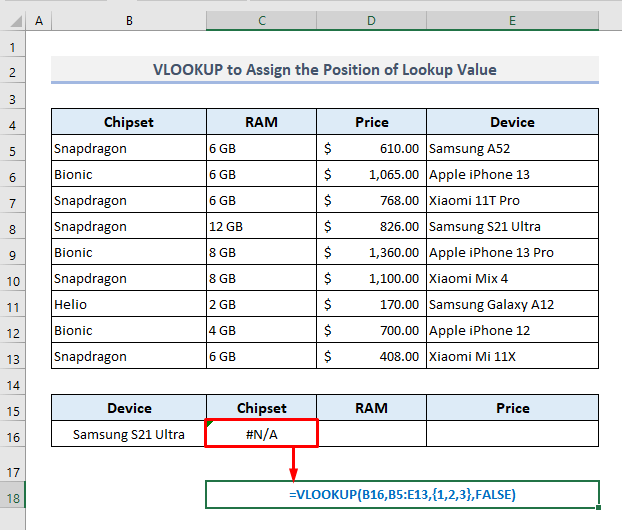 So, to extract the available data from the table for the specified device present in Cell B16, the XLOOKUP function will come up with the following syntax:

After pressing Enter, you’ll be shown the extracted data for the specified smartphone device right away. 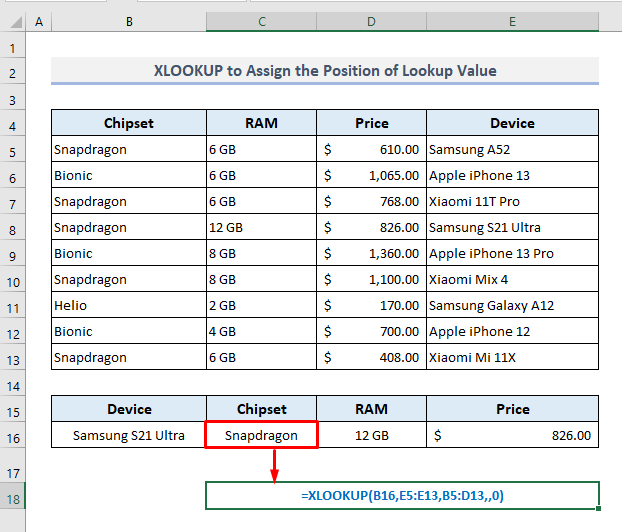 4. Extract Data Based on the Last Occurrence with XLOOKUP Only

The XLOOKUP function pulls out data based on the last occurrence of a lookup value in the table. For example, we can find out which smartphone device in Column B is the last one that uses the Bionic chipset.

The required formula with the XLOOKUP function in Cell C16 should be:

After pressing Enter, the function will return the corresponding device name at once. 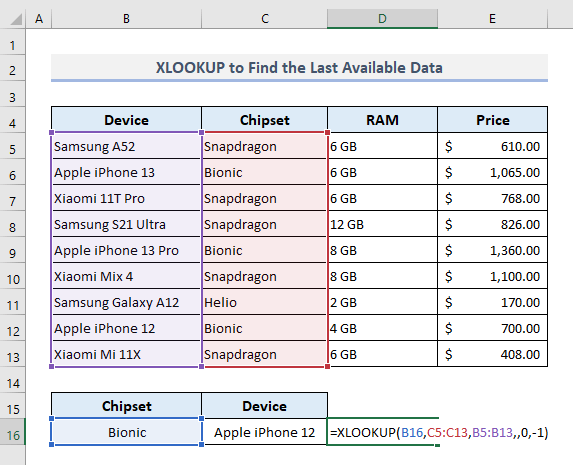 On the contrary, the VLOOKUP function itself is not able to extract the data based on the last occurrence in a table. It might have to be combined with some other functions to look up the value from the last in the data table.

Read More: How to Pull Data from Multiple Worksheets in Excel (4 Quick Ways)

5. XLOOKUP Intakes An Optional Argument to Use Wildcard Characters

In our final example, we’ll explore how the VLOOKUP and XLOOKUP functions work while extracting data based on a partial match as the lookup value. For example, we’re going to find out the available specifications by searching for the model number ‘S21’ of a smartphone device. 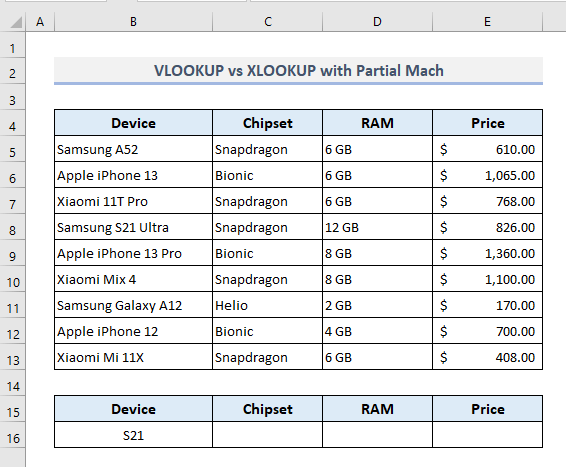 With the uses of Wildcard Characters as well as Ampersand (&) operators, the VLOOKUP function in the output Cell C16 will look like this:

After pressing Enter, the formula will return all the specifications for Samsung S21 Ultra from the given dataset. 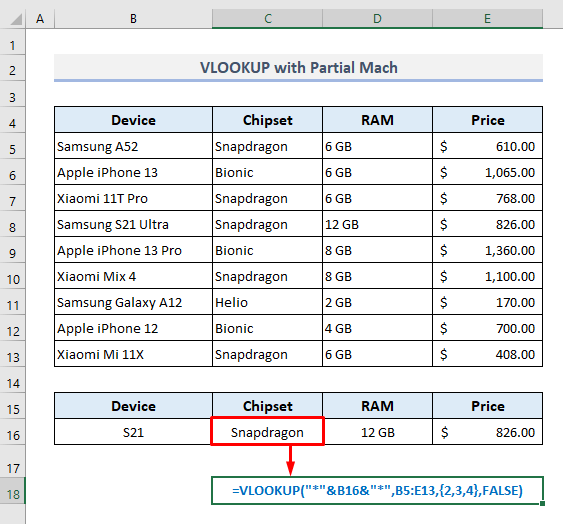 Now while using the XLOOKUP function, we have to activate the [match_mode] argument and define it with ‘2’ to denote the Wildcard Characters matches.

So, the required function in Cell C16 will look like this:

After pressing Enter, you’ll get a similar result as found with the VLOOKUP function previously. 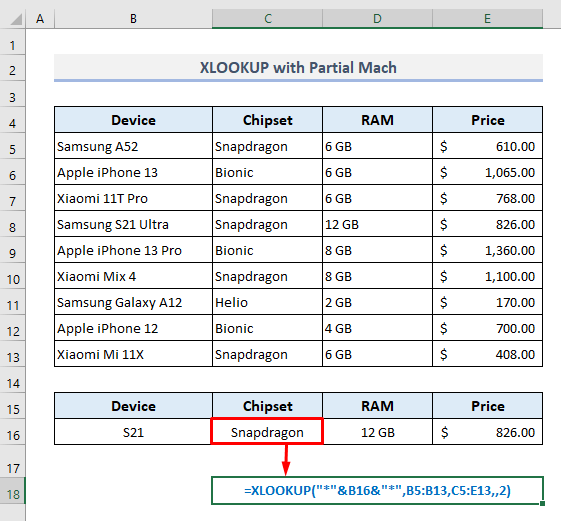 Why Is XLOOKUP Better Than VLOOKUP?

Limitations of XLOOKUP in Excel

I hope that the comparative analysis between the two functions as well as the related examples illustrated above in this article will now help you to understand the differences between XLOOKUP and VLOOKUP in Excel. If you have any questions or feedback, please let me know in the comment section. Or you can check out our other articles related to Excel functions on this website.