How to Use XLOOKUP Function in Excel (11 Practical Examples)

There are several lookup functions in Excel to perform various lookup and searching operations easily and swiftly. Today we are going to show you how to use a lookup function called: XLOOKUP function in Excel. For the session, we are using Excel 365.

The XLOOKUP function allows you to look for a value in a dataset and return the corresponding value in some other row/column.

Searches a range or an array for a match and returns the corresponding item from a second range or array.

For example, we have a movie dataset of names with respective releasing years and genres. Using this dataset, we will show you different ways of using the XLOOKUP function in Excel. 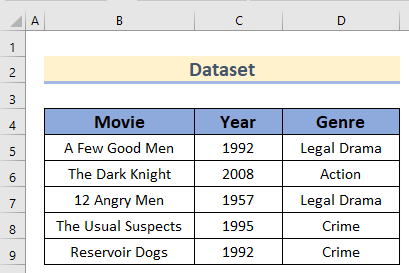 1. Use XLOOKUP Function for Exact Match

The basic task of XLOOKUP is to provide the matched value corresponding to the lookup_value. Here, we will perform a basic task. We will provide the movie name, and derive the genre using the XLOOKUP function.

Here, we have used Cell Reference in our formula. Cell F5 contains the lookup_value, and cell ranges B5:B9 and D5:D9 are the lookup_array and the return_array respectively. However, we have not set any value for match_type. As, by default, it checks Exact Match.

Another basic operation for XLOOKUP is to find an approximate match. Our example dataset has products with prices and discounts. Now, we will find the discount for the given price. 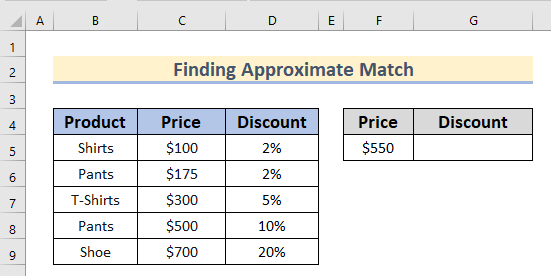 Go through the steps given below to do it on your own. 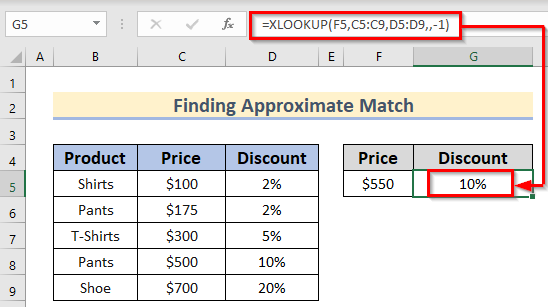 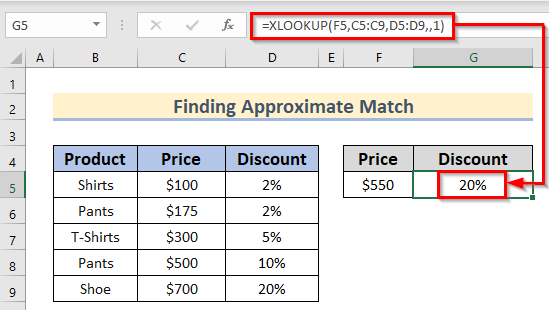 Here, we inserted 1 as our match_type field. That’s why this returned the nearest larger value.

We can also find the multiple values using the XLOOKUP function.

Now, we are going to use the previously introduced movie dataset (in addition we have added the Lead Actor column). Here we will find all the listed details for a given movie name. 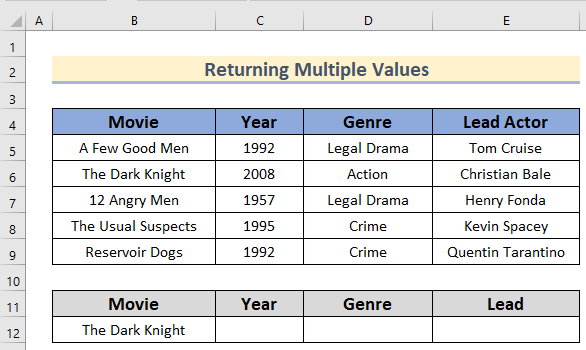 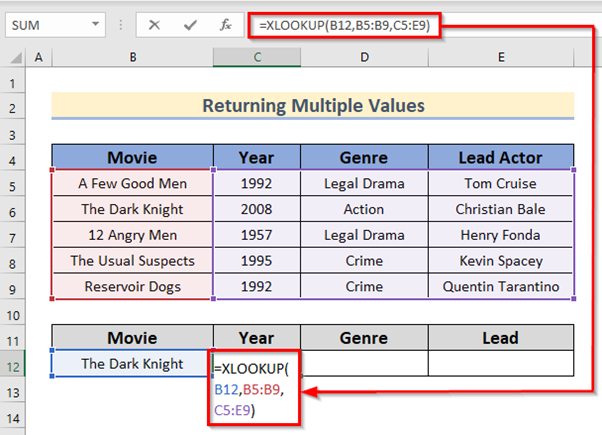 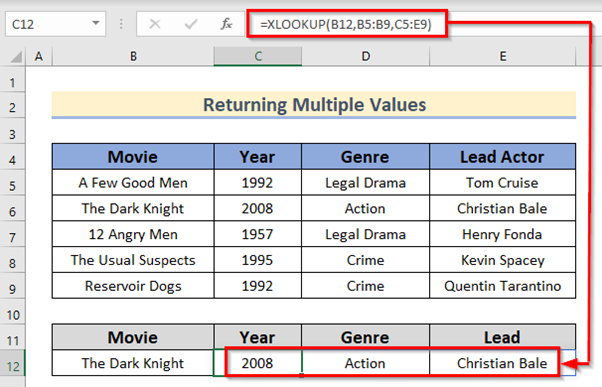 In the formula, we inserted Cell B12 as lookup_value, and cell ranges B5:B9 and C5:E9 are the lookup_array and the return_array respectively.

The XLOOKUP function can be used for a multi-way (multiple criteria) lookup.

We have selected a dataset of the roll of honor of 5 European leagues. Now, we will set the name of the league and the status as criteria and lookup for the corresponding Team.

Here are the steps.

We can exercise horizontal lookup using the XLOOKUP function.

Here, we have a dataset of several players with their goals and assists. Now, we will find the goals and assists for a given player. The name of the player will be our lookup_value and stored in Cell C9. 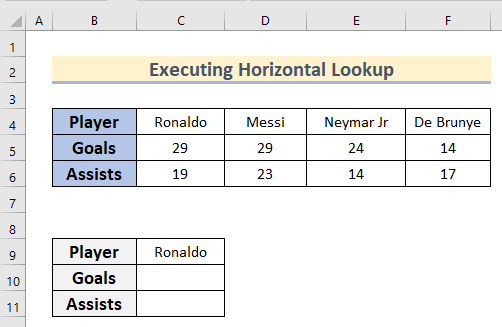 Here are the steps. 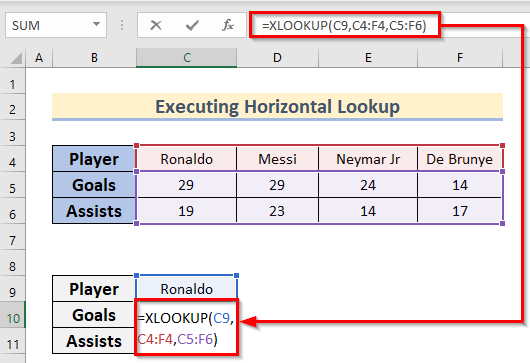 In the XLOOKUP function, we inserted Cell C9 as lookup_value, cell ranges C4:F4 and C5:F6 as lookup_array and return_array respectively.

6. Use Nested XLOOKUP Formula in Excel

XLOOKUP can be used with other functions for nested lookup.

Let’s imagine, from the scorer dataset we want to find the goals involvement (sum of goals and assists) for a given player.

Now, to calculate the Goal Involvement for a given Player can be found going through the following steps.

Through XLOOKUP we can find the value we are aiming for.

From our movie dataset if we set a value that is within our table then we will find the value. However, if we set a movie name that is not on the table, then the #N/A error occurs.

Here, we have provided GodZilla as the movie name. And the error occurred.

To eradicate the error, follow the steps given below.

In the formula, we have set “Not Found” as the if_not_found value. Since our provided movie was not in the dataset, we have found the message “Not Found”.

Now, we will show you how to utilize the XLOOKUP function along with other functions such as LEFT, NOT, and MONTH functions for complex criteria.

Suppose we have a dataset containing some bank Account No, their corresponding Country and the amount of cash, and the Date of transaction of those accounts.

Now, you want to look for the data for the account that begins with “x” and Country is “Australia” and the month is not March. 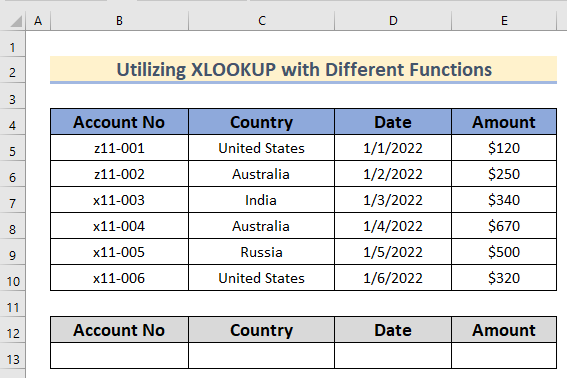 To find out the data, follow the steps given below. 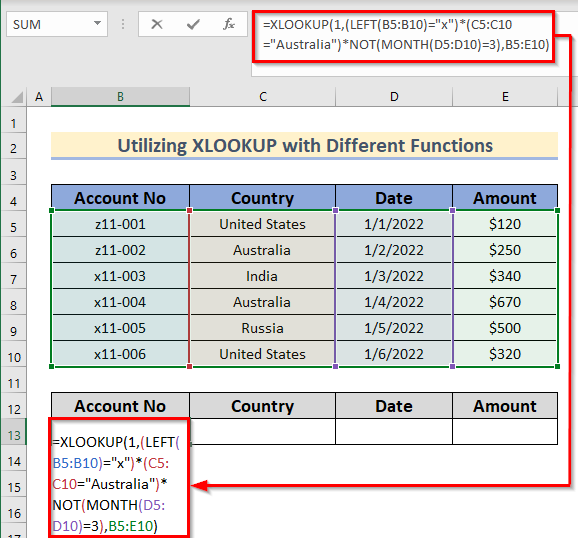 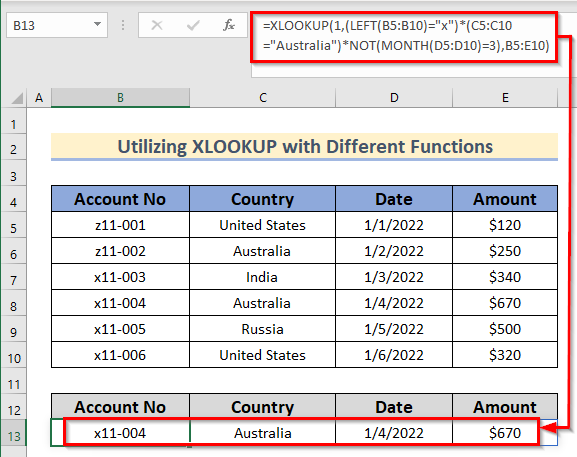 You can use the wildcards to lookup for a value in the XLOOKUP formula. We usually use the asterisk (*) sign as wildcards.

Here, in the movie dataset, we will find the genre of a given movie with a wildcard.

In the XLOOKUP function, we inserted 2 as match_mode for partial matches using asterisks.

Now, suppose a value occurs several times in a dataset. However, you want to find out the corresponding value of the lookup value from its last occurrence. You can do this using the XLOOKUP function in reverse order.

Here, in our dataset Pants are sold 2 times. However, we want to find out the price of the pants in the last occurrence.

To do that, go through the steps given below. 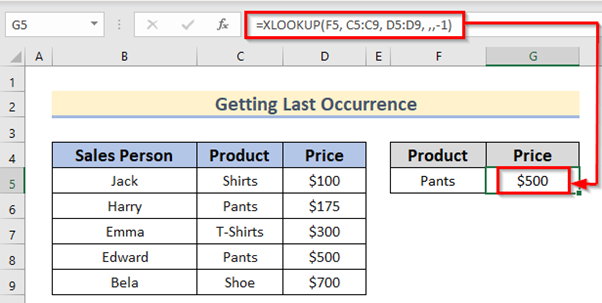 Here, we put -1 as search_mode to use the function in reverse order.

In the last example, we will show you how you can use the XLOOKUP function to lookup for a value from the left.

Suppose from the movie dataset, you want to find a movie name using Action as Genre.

In the article, you will find an Excel workbook like the image given below to practice on your own.

That’s all for today. We have tried showing you how you can use the XLOOKUP function in Excel. You can use the function to find the value from an array or reference. Hope you will find this helpful.