How to Use COMBIN Function in Excel (4 Examples)

You can download the practice book from the link below.

Introduction to COMBIN Function in Excel

In mathematical calculations, Combination is defined as a technique of selecting items from a provided list of items without considering the order of selection. Don’t confuse Combination with Permutation! The main difference between Combination and Permutation is that: Permutation takes the sequence of order into account, whereas Combination ignores the order.

COMBIN function is a Math and Trigonometry type function for performing mathematical calculations in Excel. This function determines the possible number of combinations from a given data range.

COMBIN function is used to determine the total possible number of combinations for a given number of items without any repetition in Excel.

Returns the number of combinations for a given number of items.

COMBIN function was first introduced in MS Excel in version 2000. So it is workable from this version and later on. I have used MS 365 for this article. You may proceed with your functionable version. 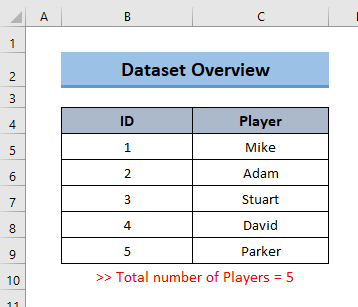 So. let’s check how we can perform this task. In this section, we will see the use of the COMBIN function for finding the possible number of combinations of players. I will demonstrate them here with proper illustrations. Let’s check them now!

In the concerning dataset, we have seen that there are 5 players in total. Our aim is to form some teams with 2 members in a group. So we need to find out the possible number of combinations of 2 players out of 5. For this, we will apply the COMBIN function. You can just directly input the parameters into the arguments of the function. Let’s proceed with the following steps. 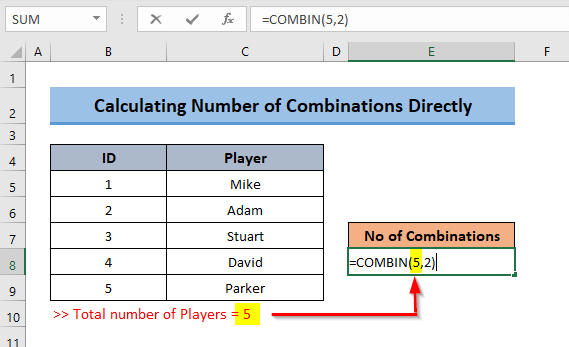 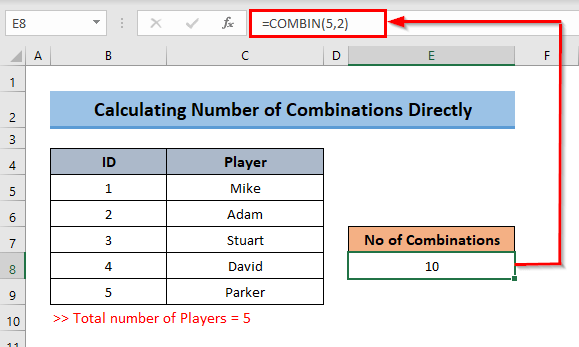 Just think with real-life examples and you will find the 10 possible groups. We have shown the 10 duos with the 5 members of our dataset. 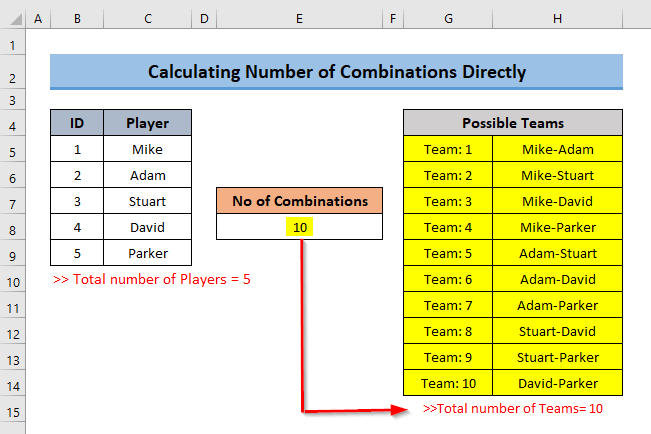 Read More: How to Find Combinations Without Repetition in Excel 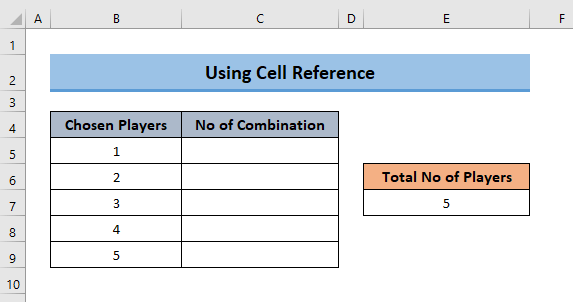 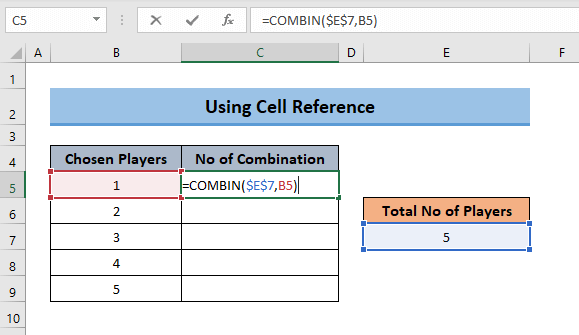 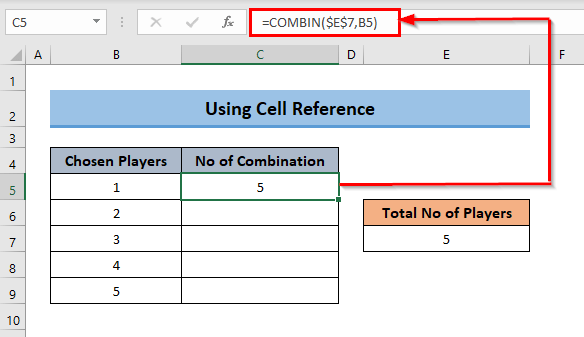 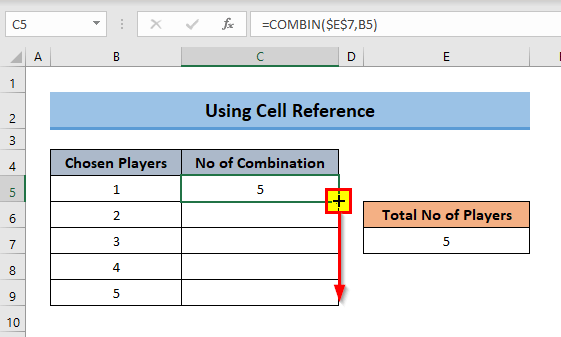 Note: As each time we need to find the teams out of 5 players (which is fixed), so we have used the Absolute Cell Reference for the cell with total players. 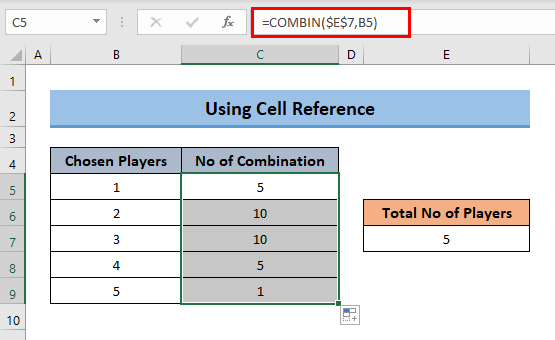 Read More: How to Find All Combinations of 1 Column in Excel (2 Handy Ways) 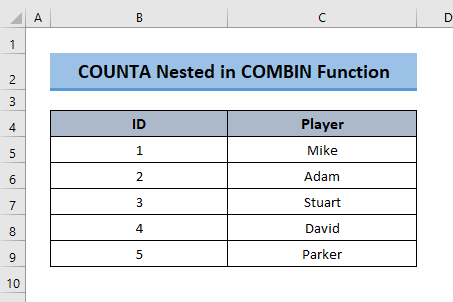 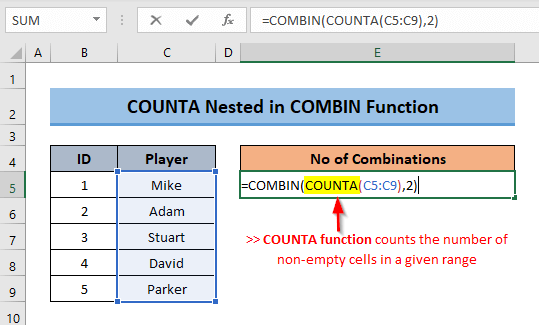 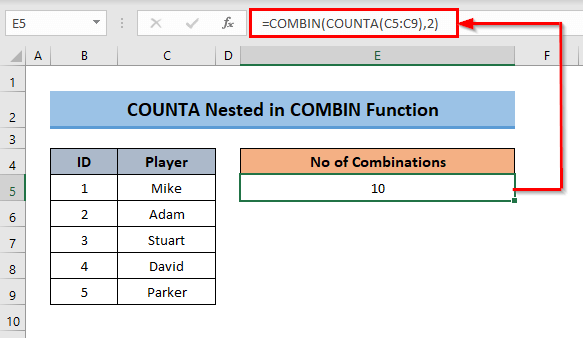 Read More: How to Sum All Possible Combinations in Excel

4. Use COMBIN Function in VBA Code

You can also use the COMBIN function in a VBA code to find the same output for the concerned dataset.

Here, we have applied code for creating groups of 2 items out of 5. 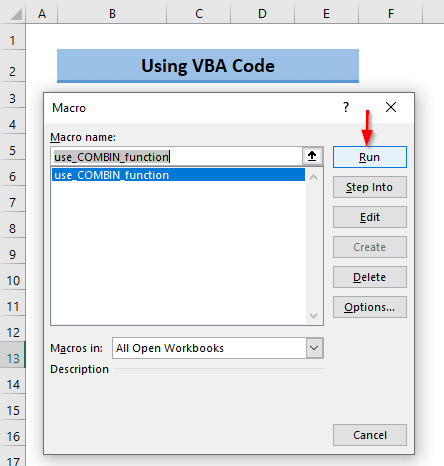 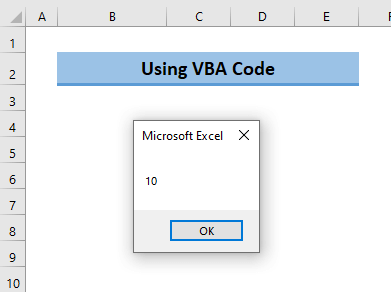 Read More: How to Show All Combinations of 5 Columns in Excel

In this tutorial, I have tried to show you some ways of using the COMBIN function in Excel. Hope you like reading the article and from now on you can apply this function for serving your purpose. Don’t forget to leave a comment if you have any queries or feedback regarding this article. Keep in touch with ExcelDemy for getting acquainted with more Excel functions.

Hey there! I am Md. Rafiul Hasan. Currently I am working as an Excel & VBA content developer. I like new ideas and want to explore the field of innovation. Excel has saved our worktime and made it easy for us to quick calculations. I am trying to make it easier for you to overcome the obstacles you face while working on Excel. Stay connected!