How to Find Correlation between Two Variables in Excel

The discussion of correlation is prevalent in many financial sectors. Financial papers and analysts often evaluate the correlation between the price of gold and let’s say a certain stock.

One can use either the CORREL Function or the Analysis ToolPak to deliver the correlation coefficient between two variables.

There is one main issue to note with the correlation coefficient and that is that it should not be used to denote a cause and effect relationship. For example, smoking causes an increase in the risk of lung cancer, whereas smoking and alcoholism are correlated (the one does not cause the other in this scenario). It is very important to note that there may be another variable affecting the relationship between two variables and therefore not use correlation as a causation indicator.

What do I mean by all of this? , well, let’s get started with a simple example.

A store manager working at a hypothetical department store is looking at the relationship between the monthly number of free complimentary makeovers given by the beauty department and the monthly sales of makeup sets in that specific department. The source data is shown below.

1) In a cell in the worksheet, we enter the formula

Where A5: A11 is the first data array, namely the free complimentary makeovers given per month, array two refers to the range B5: r valueB11 which is the number of makeup sets sold per month over the given period.

2) Pressing CTRL-ENTER results in a correlation coefficient or r-value of 0.973 being returned.

Using the Correlation option in the Analysis Tool Pak Add-in 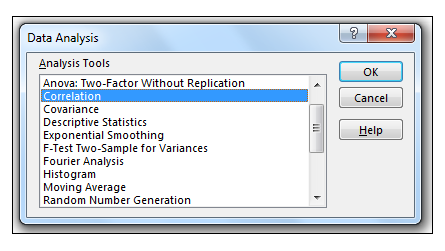 3) Select range $A$4: $B$11 containing the data, as the input range. Make sure Labels in the first row are checked. For the output, range chooses cell $A$16 as shown below. 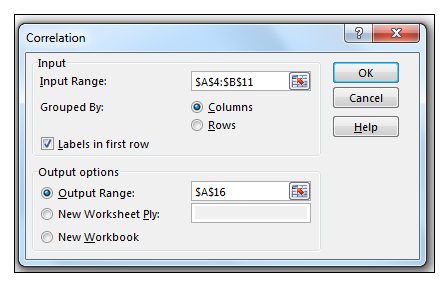 5) We get the same result as when using the CORREL function.

Taking our results in context, we can see that there is a strong positive correlation between the free complimentary makeovers given per month and the sales of makeup sets per month as indicated by the correlation coefficient r-value of 0.973, which is very close to 1.

However, we cannot use these results to indicate a cause and effect relationship, since the increase in sales of makeup sets per month may also be influenced by other factors such as an increase in ads in print media advertising the makeup sets for example.

Correlation and the correlation coefficient are often discussed in many financial sectors such as the stock market and investment portfolio analysis, therefore it helps to have an understanding of what is being discussed.

Please feel free to comment and tell us your thoughts about correlation.

How to Merge Rows in Excel without losing Data (5 Ways)

How to Compare Two Excel Sheets for Duplicates (4 Quick Ways)

Multiple Methods of How to Sum a Column in Excel