Sum to End of a Column in Excel (8 Handy Methods)

This article is all about determining the sum of numeric values to the end of a column in Excel. We can perform this using different functions and other features of MS Excel.

Table of Contents hide
Download Practice Workbook
8 Easy Methods to Sum to End of Column in Excel
1. Sum Entire Column in Excel
2. Formula to Sum Multiple Columns
3. Sum Non-Contiguous Columns at Once
4. Sum Entire Column to End without Header
5. Use Excel AutoSum Feature
6. Find the Sum of a Column at the Status Bar of Excel
7. Use Excel SUBTOTAL Function
8. Use the Table Feature
Conclusion

Sum to End of a Column.xlsx

8 Easy Methods to Sum to End of Column in Excel

We will just determine the sum of a column up to the bottom in Excel. We have taken a dataset that shows the sales of a store for the month of January. 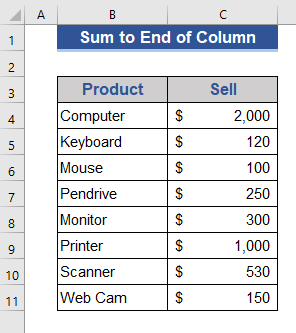 Now, we will apply the SUM function throughout the entire column.

The SUM function adds all the numbers in a range of cells. 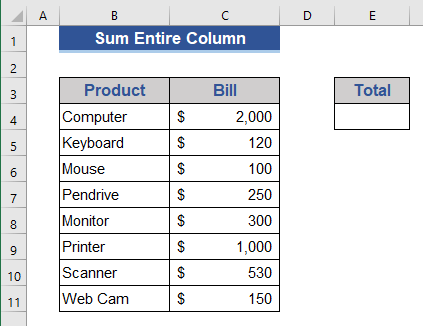 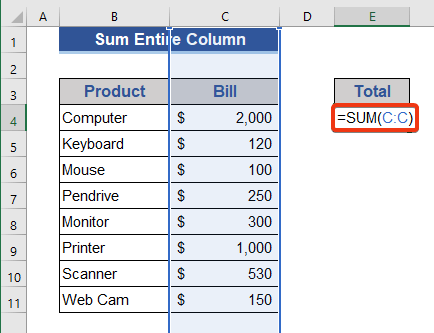 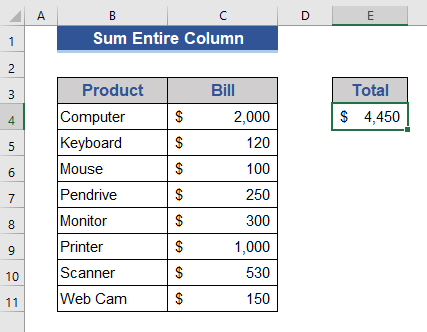 We successfully get the dum of the entire Column C.

We will form a formula to sum multiple columns in Excel. We have data in Columns C and D and we want to get the sum of those columns. 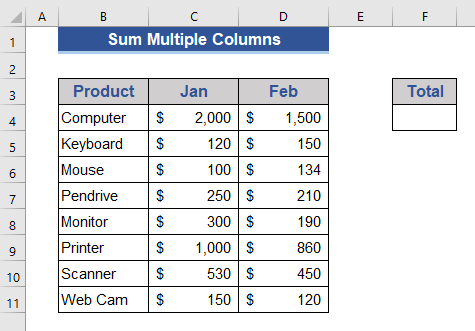 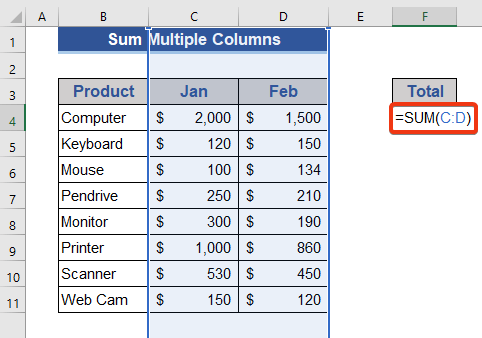 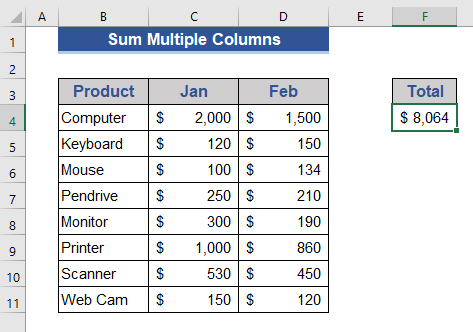 Finally, we get the sum of those adjacent columns.

3. Sum Non-Contiguous Columns at Once 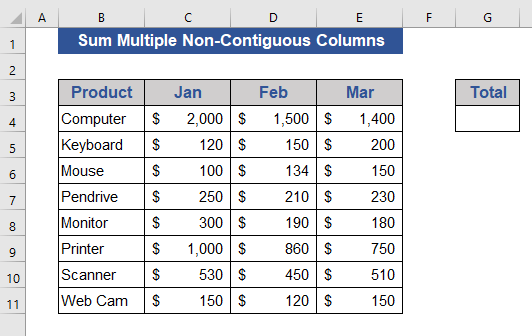 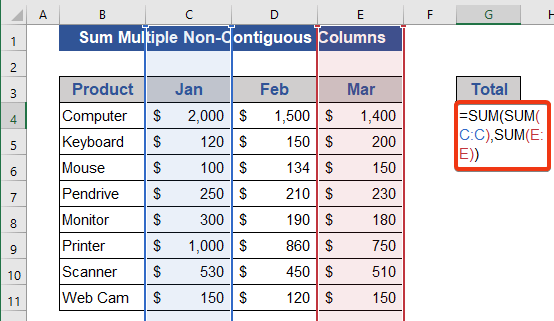 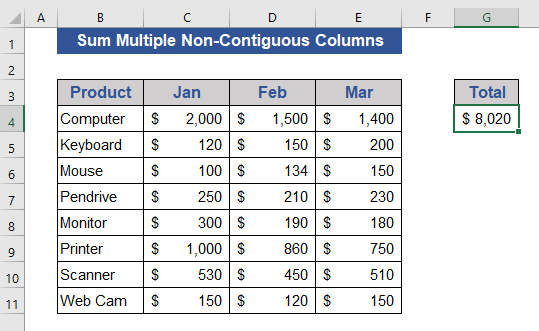 We can apply another formula and will get the same result. The formula is:

One of the advantages of using the formula is that we don’t need to use the SUM function multiple times. 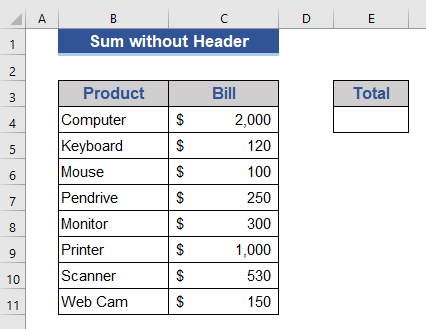 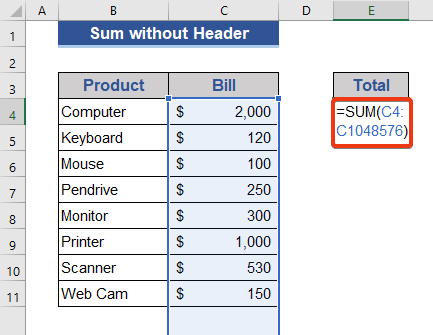 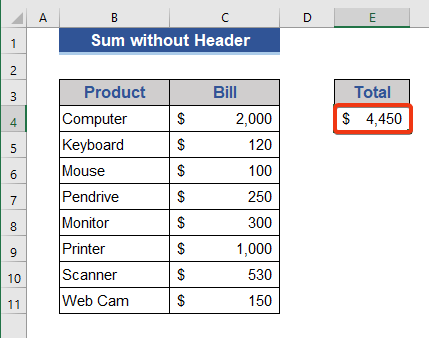 Now, get the sum of the entire column without the header.

Excel AutoSum is an interesting feature. There is no need to apply any formula for that. We can also apply a shortcut to avail AutoSum. Just follow the below steps for that. 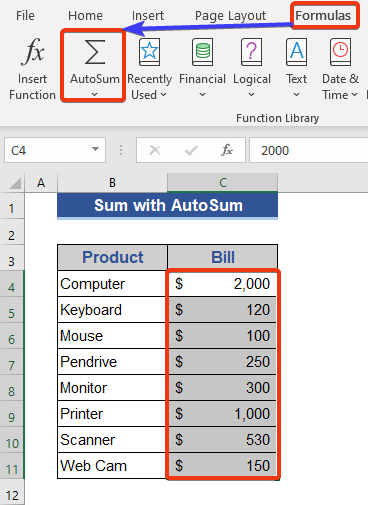 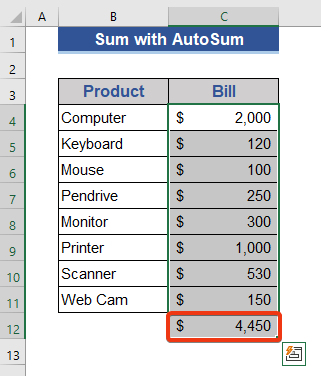 Here, we can see the sum is showing in the adjacent cell.

We apply another keyboard shortcut for AutoSum. Press Alt+ = and the AutoSum will apply.

6. Find the Sum of a Column at the Status Bar of Excel

This is the simplest way to get the sum of a column to the end. Look at the steps below. 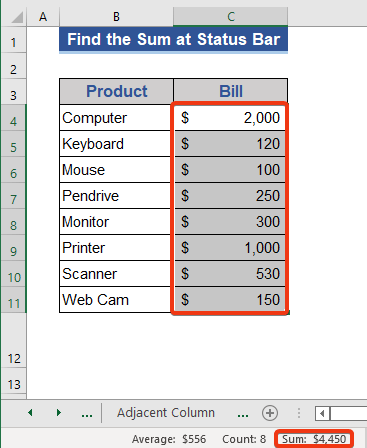 Now, look at the bottom of the sheet. We get the sum here. This sum value is for the selected cells. But we want to get the sum for the end of Column C. 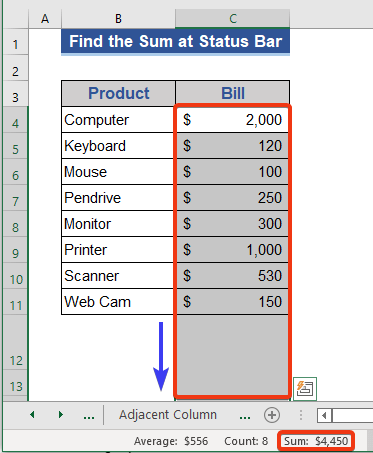 We get the sum for the entire column at the bottom section of the sheet.

The SUBTOTAL function returns a subtotal in a list or database. 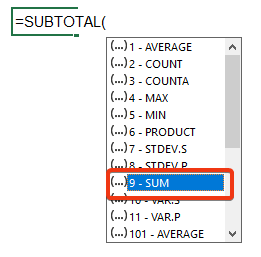 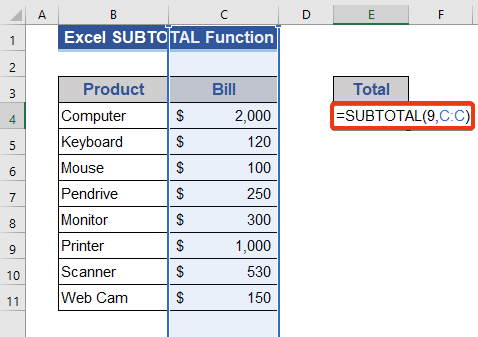 The 1st argument of the formula is 9, which indicates the performing sum function. 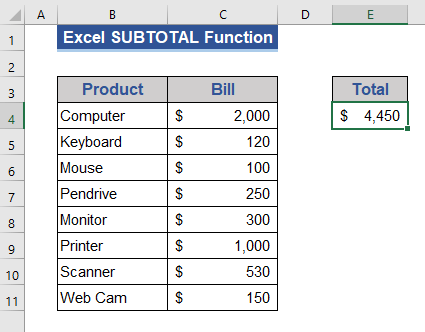 8. Use the Table Feature

The Table is an amazing feature of Excel. We can get the sum of the column using this Table feature. Rather than the sum, it also offers other functions. 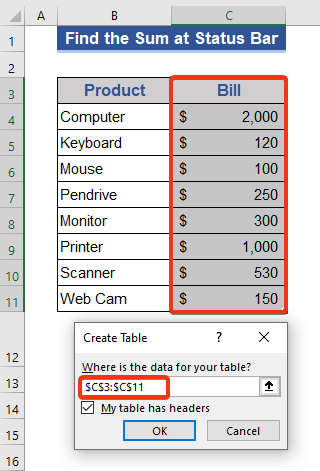 The table has formed already. 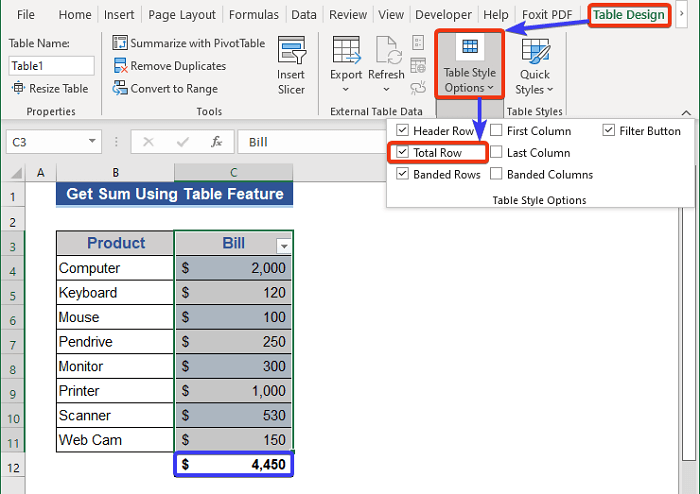 We get the sum at the adjacent cell of our selection. 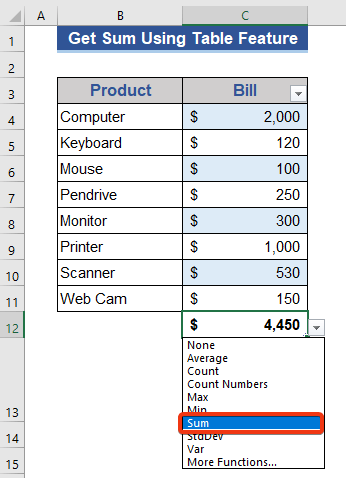 We can see other options now.

In this article, we described how to get the sum to the end of a column in Excel. I hope this will satisfy your needs. Please have a look at our website ExcelDemy and give your suggestions in the comment box.

How to Create a Training Matrix in Excel (3 Easy Methods)