You can download the practice book from the link below.

There are different types of characters used in Excel like letters ( a b c ), numbers ( 0 1 2 3 ), punctuations ( , . :), and some special characters ( @ # ! ), etc. A user can type most of the characters with the help of keyboard. But we can’t enter the special characters using the keyboard. However, for each character, a code is defined in the system of the computer. ASCII (American Standard Code for Information Interchange) represents code for computers, telecommunication equipment, and some other devices.

The CHAR function in Excel returns a special character when any valid number is applied to this function. According to ASCII, any number between 1 to 255 has a distinctive character assigned to it on a computer. So, the argument of the CHAR function is the code of the corresponding character. For example, the code for a Hyphen is 45. So, CHAR(45) will return a Hyphen.

Let’s say, we have some character codes in an Excel worksheet. The names of the characters and corresponding CHAR functions are available here. 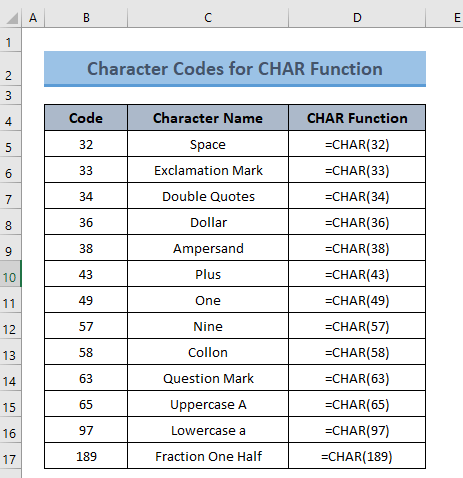 We have shown the formulas instead of showing the values. Now we want to show the symbols using the CHAR function. In order to do so, proceed with the following steps. 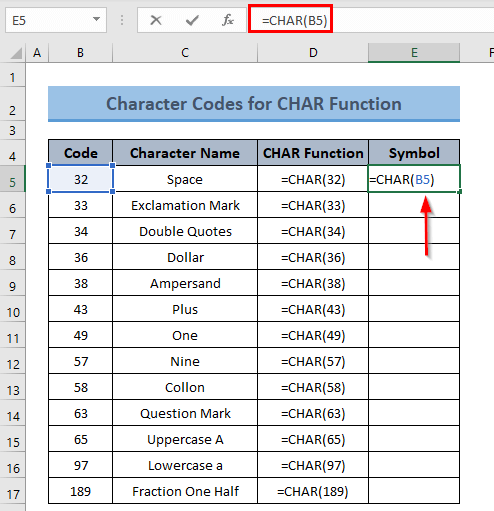 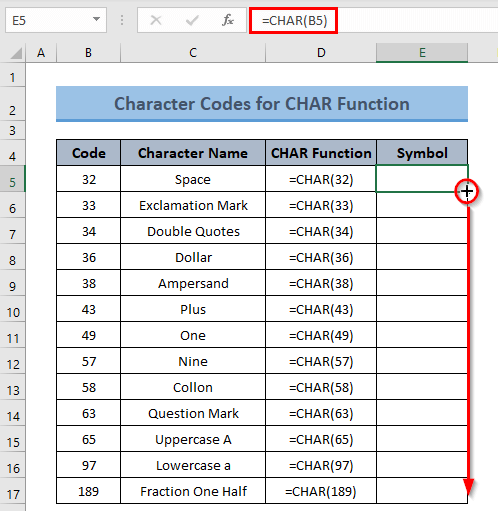 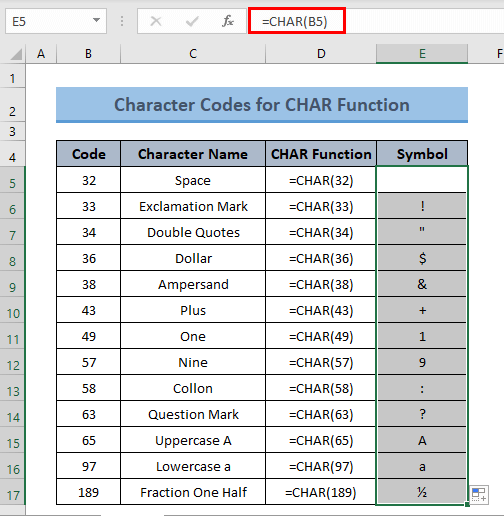 5 Common Uses of Character Codes with CHAR Function in Excel

In this section I will discuss about adding, removing, and replacing some characters by using codes with the help of the CHAR function. Let’s check them out!

Sometimes you may need to add two text strings together in your worksheet. When you need to do these types of corrections for a few number of cells, it’s okay to do it manually. But, it is not a wise approach for a large number of cells and dynamic sheets. Here, applying the character codes using the CHAR function will definitely make your task easy and dynamic.

Let’s say, we have the first name and last name of a person and we want to add these two text with a “Space” between them. The character code for “Space” is 32. Let’s see how you can connect these two text strings.

Read More: How to Use Code 9 with Excel CHAR Function (2 Easy Examples)

2. Adding Hyphen to a Text

A user can add two texts with Hyphen by using the character code nested in the CHAR function. In our data, we have the Road No. and House No. of a person and we want to show the Full Address by connecting these two texts with a Hyphen. In order to do so, just proceed with the steps below.

Read More: How to Use CHAR(10) Function in Excel (3 Practical Examples)

3. Adding Multiple Characters in a Text

You can not only add single characters using the CHAR function but also add multiple characters between texts with character codes. In the example below, I have added Space, Hyphen, and Colon between texts. So, let’s start the process like the one below. 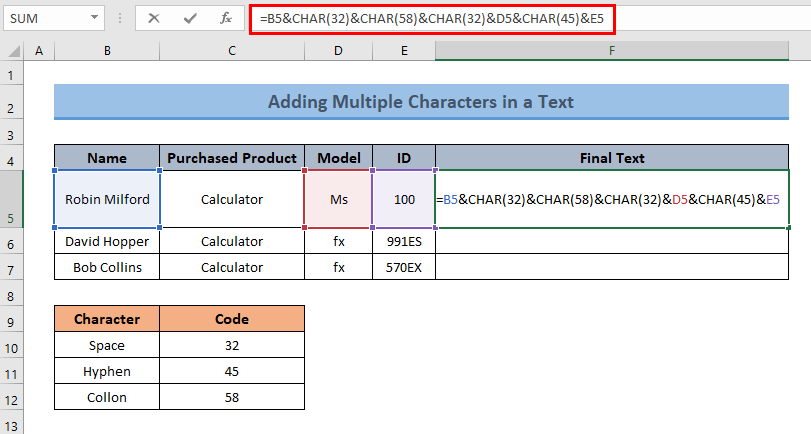 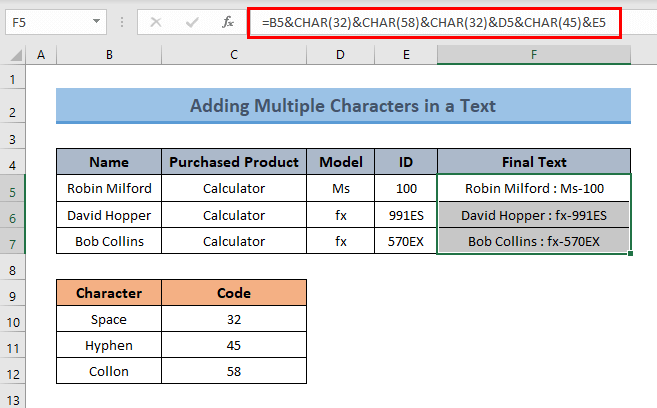 Read More: How to Use CHAR(32) Formula in Excel (5 Practical Examples)

4. Removing Character from a Text

Here, our dataset includes a Dollar sign ($) and we want to remove this character. The character code for Dollar is 36. Just apply the following formula in the cell.

The SUBSTITUTE function removes the character with code 36 and put a blank space.

Read More: How to Use CHAR(34) Function in Excel (2 Handy Examples)

5. Replacing Character in a Text

If you want to replace the Dollar sign ($) with a Hash (#), then apply the following formula. 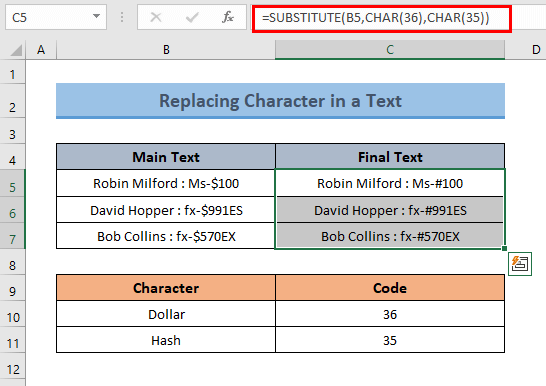 The SUBSTITUTE function removes the character with code 36 and replaces it with a character whose code is 35. So, $ is replaced by #.

Read More: How to Convert Excel ASCII to Char (An Easy Way)

In this article, I have tried to show you some uses of character codes for the CHAR function in Excel. Hope the article helped you. If you have better methods, questions, or feedback regarding this article, please don’t forget to share them in the comment box. For more queries, kindly visit our website. Have a great day!

Hey there! I am Md. Rafiul Hasan. Currently I am working as an Excel & VBA content developer. I like new ideas and want to explore the field of innovation. Excel has saved our worktime and made it easy for us to quick calculations. I am trying to make it easier for you to overcome the obstacles you face while working on Excel. Stay connected!

How to Truncate Text After Character in Excel (4 Suitable Ways)

How to Get Remainder in Decimal in Excel (3 Suitable Ways)

How to Calculate Option Greek Delta in Excel (with Easy Steps)