You have come to the right place if you are looking for some unique tips to use the Excel CHAR 9 function. There are several ways to use the Excel CHAR 9 function. This article will walk you through each and every step with appropriate examples. As a result, you can use them easily for your purposes. Let’s move on to the article’s main discussion.

What Does Char 9 Mean in Excel?

The CHAR function is a popular Excel function. This function takes the ASCII (American Standard Code for Information Interchange) code as an input. After that, it returns a symbol or character for that ASCII number. English letters, numbers. Symbols, etc., are included in ASCII code.

For example, you can add the ampersand (&) sign by writing the following equation.

CHAR(9) returns a tab between the texts in Excel. 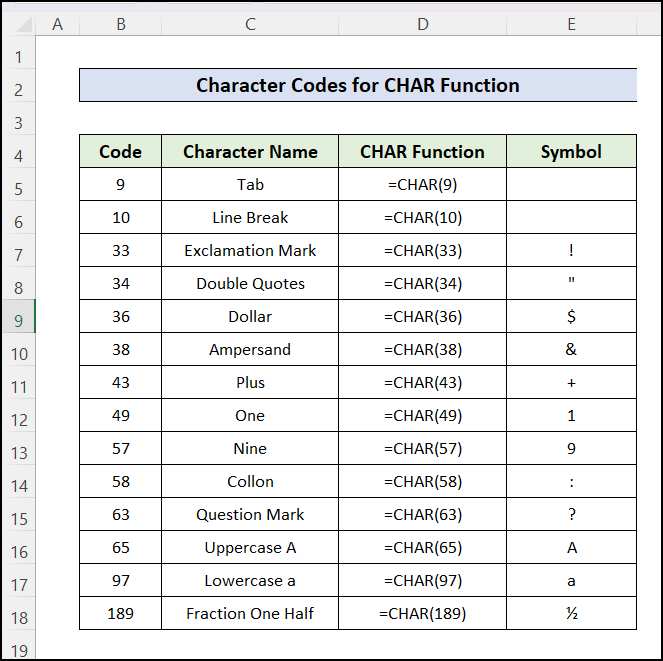 Read More: How to Convert Excel ASCII to Char (An Easy Way)

In this section, I will show you 2  quick examples of how to apply the CHAR 9 function in Excel on the Windows operating system. This article contains detailed explanations with clear illustrations for everything. I have used the Microsoft 365 version here. However, you may use any other version depending on your availability. Please leave a comment if any part of this article does not work in your version.

I have a dataset with some students’ names, departments, and class ranks that I want to combine into one cell with a tab between each text. 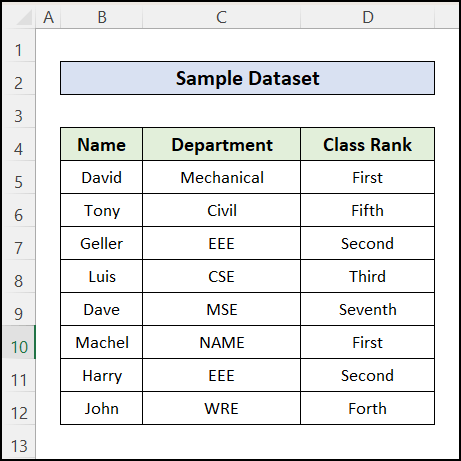 First, I will show you a simple example using the Excel CHAR function, so, you will get a rough idea of how to use this function.

Now, I will show you another example where I will combine some texts from multiple cells with a tab separating them. 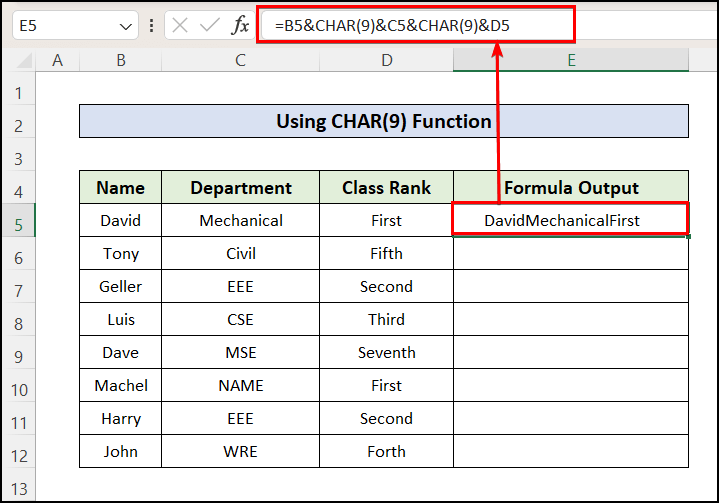 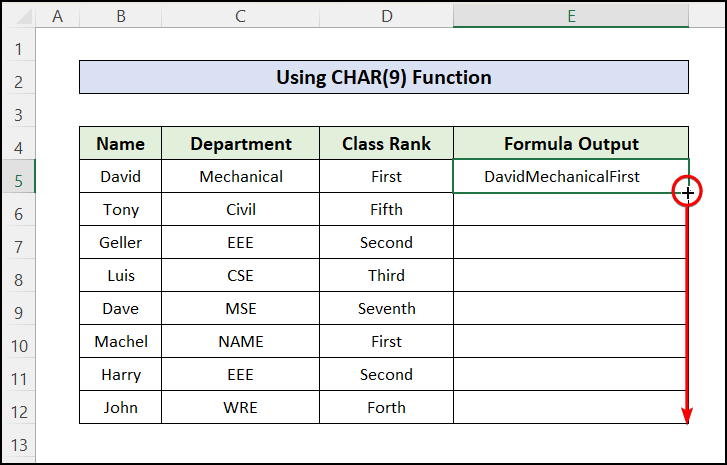 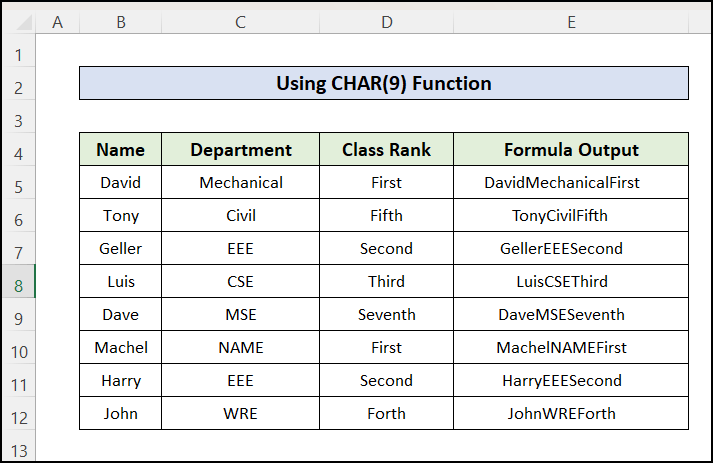 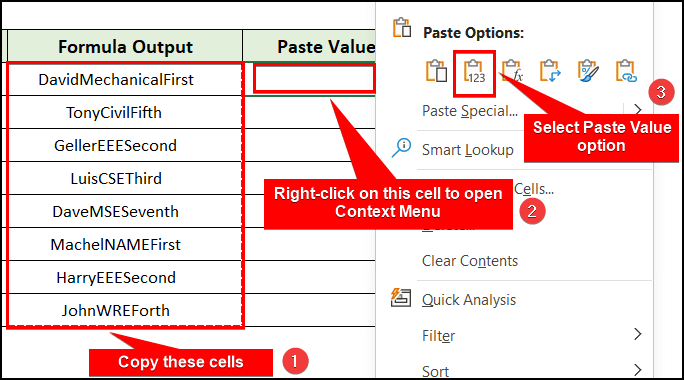 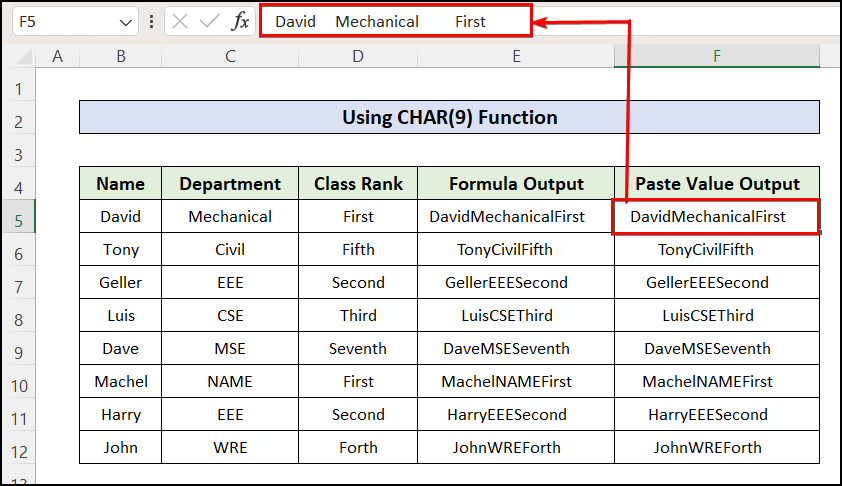 How to Shorten an Excel Formula Having Multiple CHAR Functions

You may feel weary to insert CHAR(9) repeatedly for multiple tabs if required. I can show you a trick so you can easily call the CHAR function and insert a tab where needed. For this, you just have to insert the tab in a cell using the CHAR function. Follow the steps below:

Character 9 or Tab Space Is Not Visible in Excel?

You may sometimes think that the CHAR 9 is working. Here, I will try to show you how you can recognize whether the function is working or not. Here, in cell E5, the texts of cell range B5:D5 are combined using the CONCAT function, and in cell F5, the same cell range is combined using CHAR 9 characters between them. But the output is the same for both if you see. To identify the difference, I used the LEN function to calculate the characters of each cell. And, you can see that the count of characters in cell E5 is 20, and for cell F5, it is 22. The extra 2 characters are the 2 tabs inserted between the texts with the formula.

In this article, you have found how to apply the CHAR 9 function in Excel. I hope you found this article helpful. You can visit our website ExcelDemy to learn more Excel-related content. Please, drop comments, suggestions, or queries if you have any in the comment section below.

I am Ridwan, graduated from Naval Architecture and Marine Engineering Dept, BUET, currently residing in Dhaka, Bangladesh. And my passion is to grow up my skillsets with industry demands. My prime goal is to be a data analyst as I do love to solve problems and play with data.

How to Create Permutation Table in Excel (4 Easy Methods)

How to Calculate Double Declining Depreciation in Excel