How to Calculate Average and Standard Deviation in Excel

Basics of Average and Standard Deviation

Average is mainly a number that represents the typical value of a list of numbers. Often we can call it the arithmetic mean. However, we are using the following formula for measuring the average.

Average =Sum of All Values/Number of Values

What is Standard Deviation

Xi is the ith value of the entire population

μ  is the mean value

n  is the number of values of the entire population

Methods to Calculate Average and Standard Deviation in Excel

Let’s be introduced with today’s dataset where the Name of students with their ID & Scores are given. Now, we need to calculate the average and standard deviation for the below dataset. 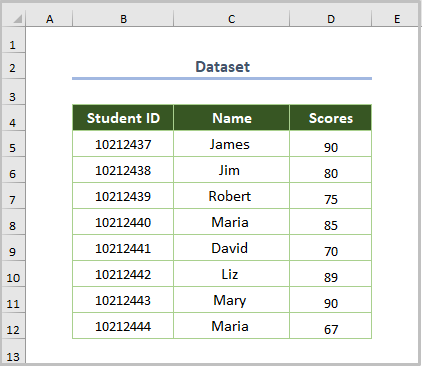 In the beginning, I’ll discuss the calculation process of average in different ways. For example, you’ll see the methods measuring the average manually and using a function. Then you’ll explore the average calculation for multiple ranges on the basis of criteria.

While grasping the equation of calculating the average, you might notice that we need to apply the SUM and COUNT functions to compute the average manually. So, the formula will be as follows. 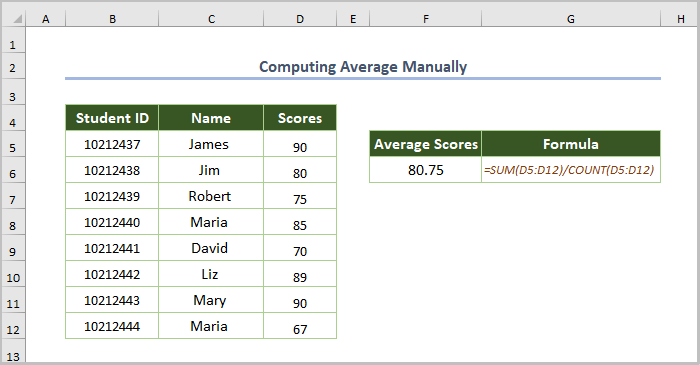 We may utilize the AVERAGE function instead of using the manual method. The formula will be-

Though the output using the manual and function is the same, the latter method is more time-saving and fast. 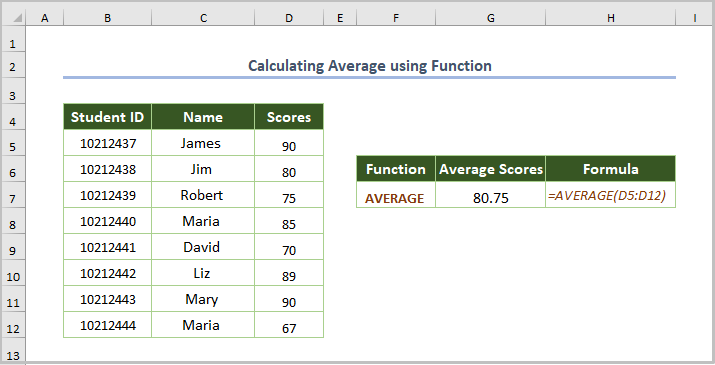 If you look closely at the following screenshot, you may see that we need to compute average scores for Physics, Chemistry, and Psychology. That is to say, we are going to measure the average for multiple ranges. 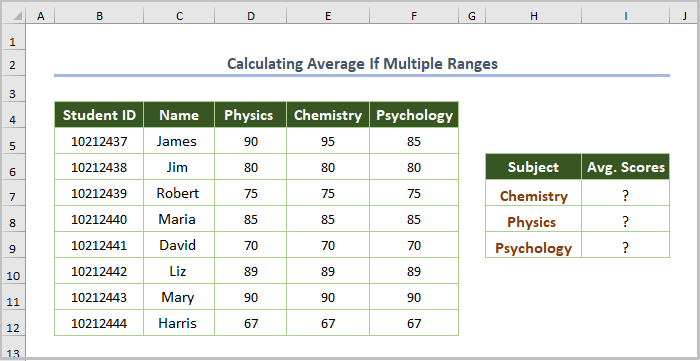 ➯ Firstly, select the entire dataset and go to the Formulas tab.

➯ Next, choose the Create from Selection option from the Defined Names ribbon. We are going to use the Name Manager to save our dataset and recall it quickly for further use. 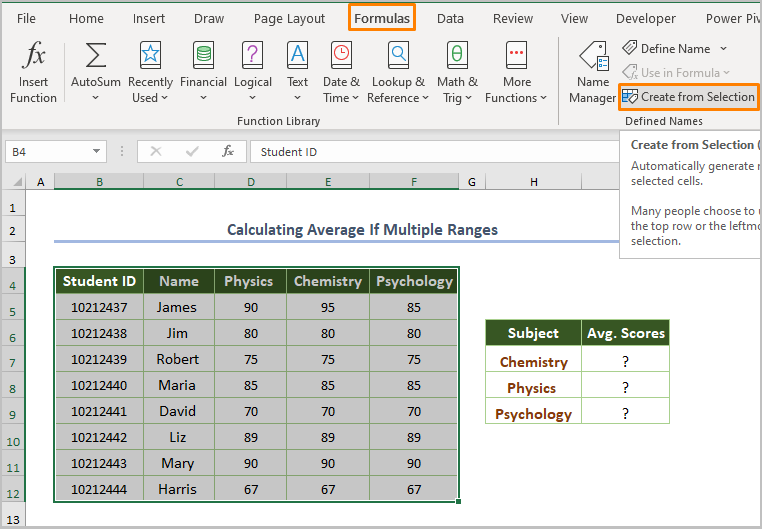 ➯ Immediately, you’ll get the following dialog box and check the box before the Top row. 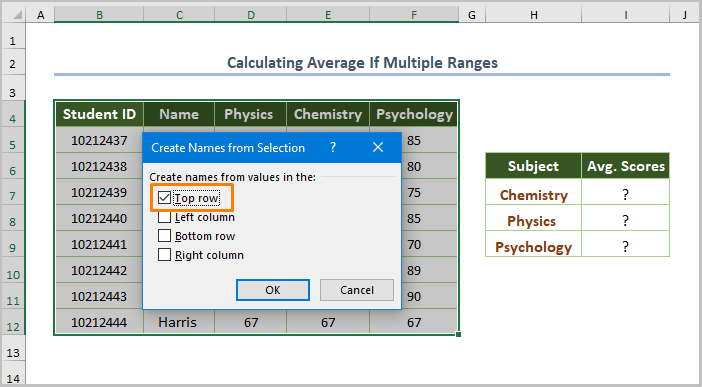 Now, you have to use the following formula for Chemistry (H7 cell)

Here, the INDIRECT function finds all the scores in Chemistry as directed by the H7 cell. Later, the AVERAGE function measures the average scores in the subject.

➯ However, if you use the Fill Handle Tool to copy the formula for the cells below, you’ll get the average scores for other subjects sequentially.

Interestingly, you can measure the average based on criteria. Let’s say, a student obtains 0 and you need to ignore the 0. In other words, you want to calculate the average of scores greater than 0. In such a situation, the AVERAGEIF function might be helpful for you.

Here, D5:D12 is the cell range of scores and >0 is for finding the average for excluding 0.

Likewise, if you wish to measure the average of scores greater than 80. The formula will be-

Here, >80 is for computing the average including the scores above 80.

Read More: How to Calculate Average of Multiple Columns in Excel (6 Methods)

In the manual method, we need to apply the SQRT, SUM, and COUNT functions combined to determine the standard deviation based on the equation.

So, the formula while finding the standard deviation for the entire population (when considering all values in a given dataset) will be like the following.

Here, the SQRT function returns the square root of the output found by dividing the total scores by the number of scores.

But the formula, if we consider a sample data from the entire population, will be-

In this case, we need to subtract 1 from the number of the entire population.

For obtaining the value of standard deviation quickly, we may use the STDEV function in Excel. 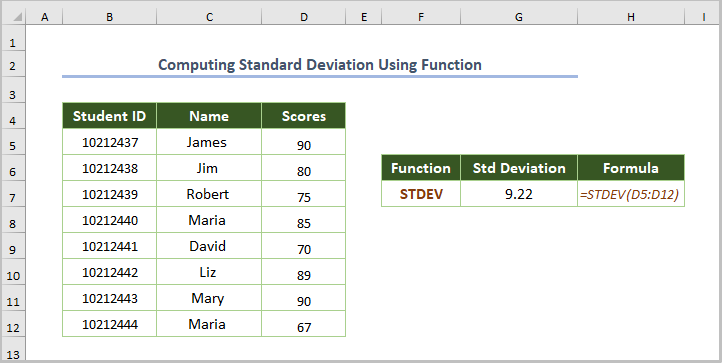 Read More: How to Calculate/Find Mean and Standard Deviation in Excel

If you want to calculate the standard deviation for a sample of data from the entire population, using the STDEV.S will be a better option for you. 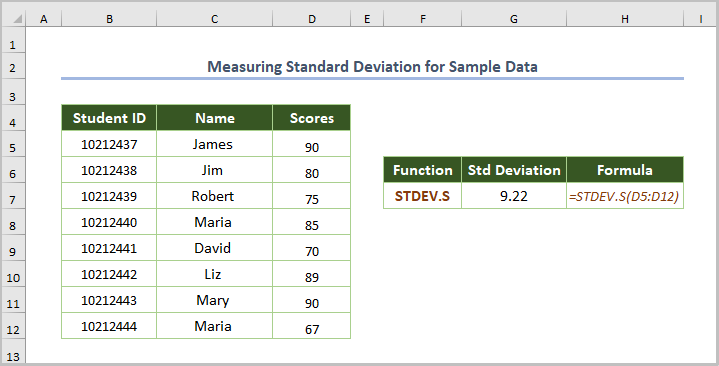 Again, if your requirement is to calculate the standard deviation for the entire population, you can use the STDEV.P function. So, the formula for the dataset will be- 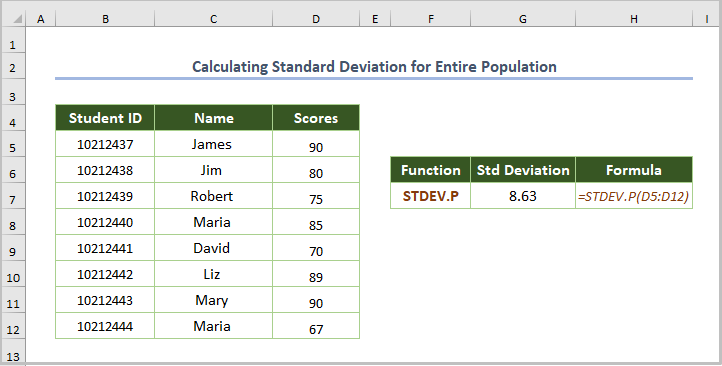 Sometimes, we ought to ignore the text and other logical values while measuring the standard deviation. Assuming that we find ‘No data’ (D12 cell in the dataset) for a student. Right away, we need to use the STDEVPA function for ignoring the text value. Just use the following formula.

Read More: How to Calculate Mean Variance and Standard Deviation in Excel

Common Errors to Calculate Average and Standard Deviation in Excel

In short, apply the above discussed methods to calculate the average and standard deviation in Excel. However, if you have any queries or suggestions, please share them in the comments section below.