How to Use Excel STDEV Function (3 Easy Examples)

The STDEV function belongs to the excel statistical functions category.

The Syntax for the STDEV Formula is:

Simplification of the STDEV Function in Excel 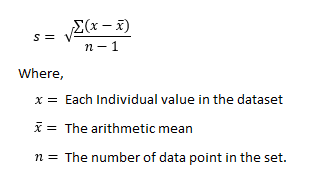 3 Examples of STDEV Function in Excel

For determining how far individual data are from the average value we widely use STDEV. For calculating the standard deviation, we can use the STDEV function, depending on whether the data set is a sample or represents the complete population.

Let us take a look at the following example, we have a dataset of six people’s weights and their serial numbers. We can orally calculate the average weights. Now, we want to calculate the standard deviation of their weights.

Now we will see the other STDEV functions.

The STDEV.S function in excel estimates the standard deviation for a collection of data in a sample. STDEV.S is a replacement for the earlier STDEV function, and it behaves in the same way.  We are using the same dataset which contains the weights of some people with their serial numbers. So, to calculate the standard deviation of their sample weights.

Assuming we are using the same dataset as before. Now the steps are as similar as before. We just need to write the function and the formula like below:

The main purpose of the STDEV.P function is to get the standard deviation of the population.

We can also use the STDEV function in VBA. In the following dataset, there are some Student marks with their ID numbers. So now we want to see the results of standard deviation using STDEV, STDEV.P, STDEVP, STDEV.S functions. Sequentially, the names of the functions are in cells E5 to E8. And the results will be shown back to back in each function’s right cell which is in column F after using the VBA Code. 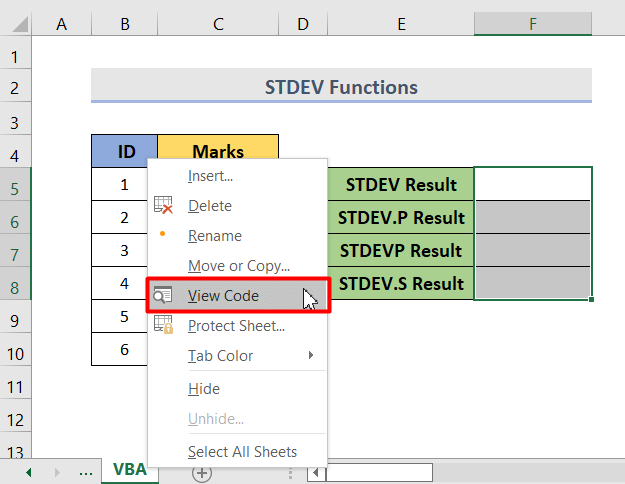 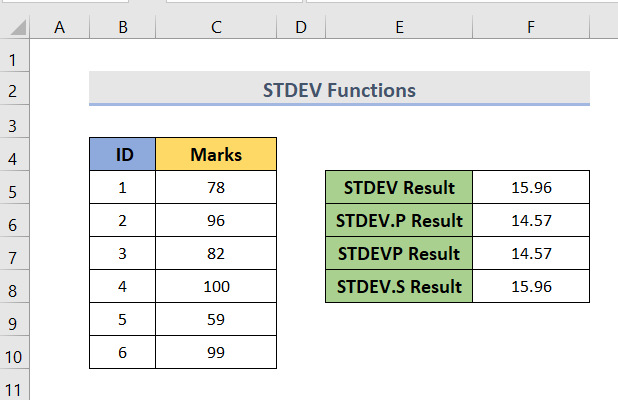 Things to Remember about the STDEV Function in Excel

Hope this will help you! If you have any questions, suggestions, or feedback please let us know in the comment section. Or you can have a glance at our other articles in the ExcelDemy.com blog!