AGGREGATE vs SUBTOTAL in Excel (4 Differences) 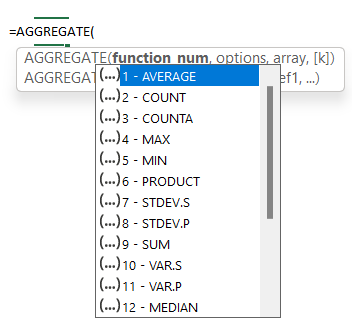 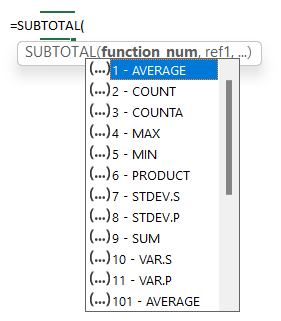 With examples and adequate representations, we will explain the distinctions between the AGGREGATE and SUBTOTAL functions in Excel in this post.

4 Differences Between AGGREGATE vs SUBTOTAL Functions in Excel

While using the AGGREGATE vs SUBTOTAL functions in Excel, we noticed some differences. Here are they-

1. Unlike AGGREGATE, (Available Since 2010), SUBTOTAL Function Is Available in Excel Since 2007

Read More: How to Use Excel AGGREGATE Function with Multiple Criteria

2. SUBTOTAL Function Let You Specify Whether to Include or Exclude Hidden or Filtered Rows

The AGGREGATE function is preferable to SUBTOTAL since it has more functions and features. SUBTOTAL, on the other hand, allows us to decide whether to include or omit manually hidden rows. However, both functions can exclude manually concealed and filtered-out rows from the assessment.

i. Dealing with Hidden Rows

For data manipulation, sometimes we have to hide or unhide rows. Now we will see the effect of hiding on the AGGREGATE and SUBTOTAL functions. 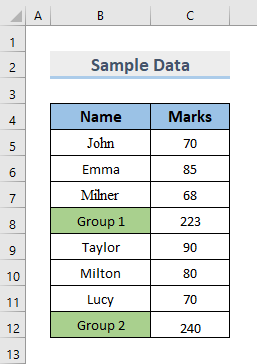 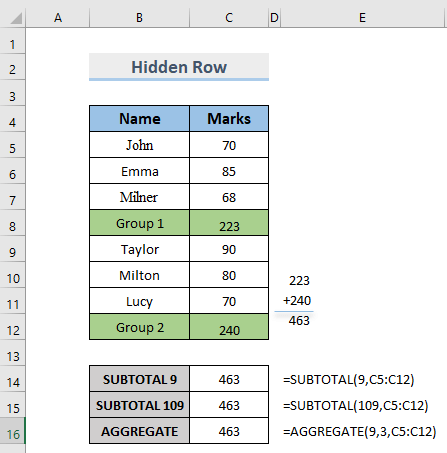 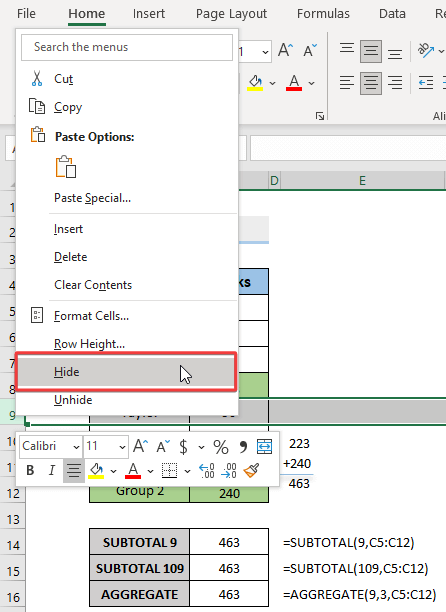 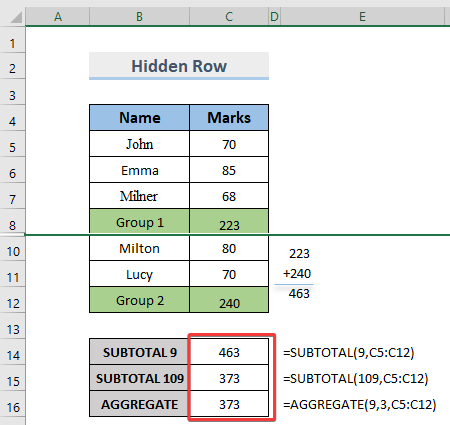 Filtering rows is sometimes required for data modification. Now we’ll look at how filtering affects the AGGREGATE and SUBTOTAL functions. 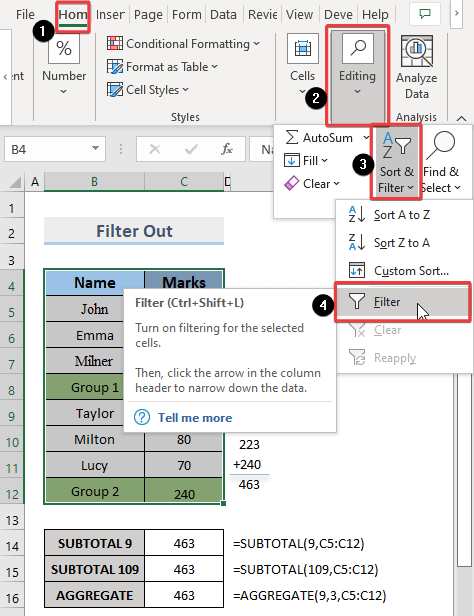 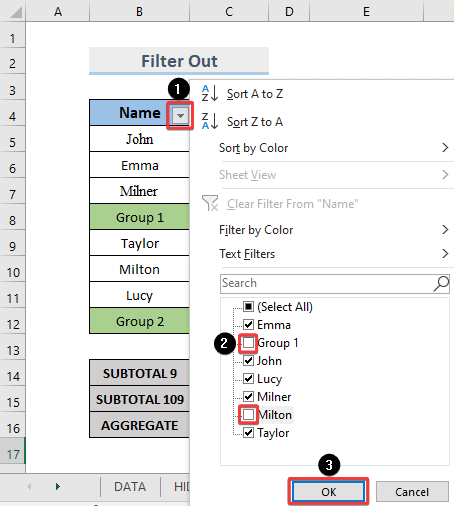 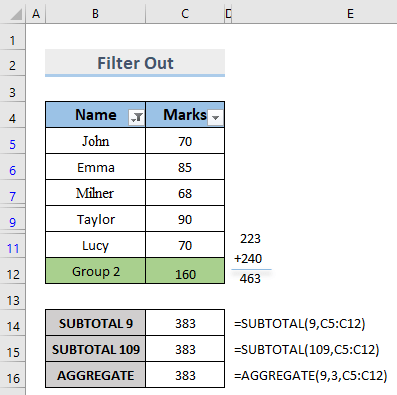 Read More: How to Aggregate Data in Excel (3 Easy Ways)

3. AGGREGATE Function Can Deal with Input Range That Has Erroneous Values in It

Cells containing invalid data like #DIV/0! are a major obstacle to data modification. We’ll look at how invalid data affects the AGGREGATE and SUBTOTAL functions. 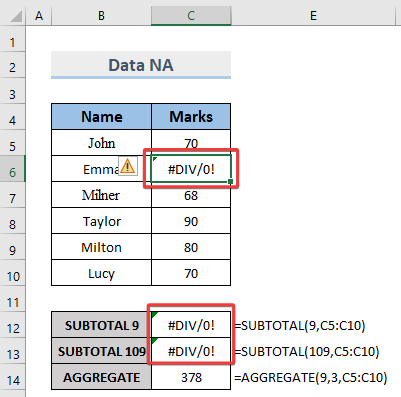 Read More: How to Use Conditional AGGREGATE Function in Excel (2 Methods)

SUBTOTAL has 9 different functions inside it while AGGREGATE has 10 more functions which make it more diverse than SUBTOTAL. 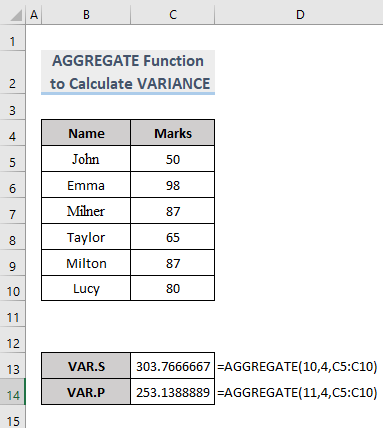 We obtained the expected output, 83.5, in our result cell after applying the MEDIAN function with the aid of the AGGREGATE function. 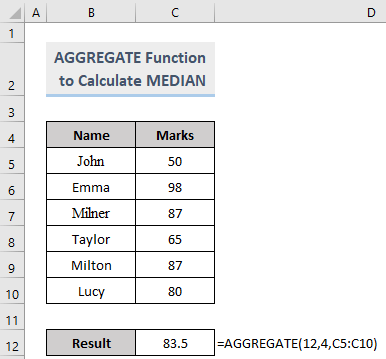 The MODE.SNGL function returns the value that occurs the most frequently inside a given range. In Excel, this is also a statistical function.

Take the following example, in which 87 appears twice while the remaining digits appear just once. 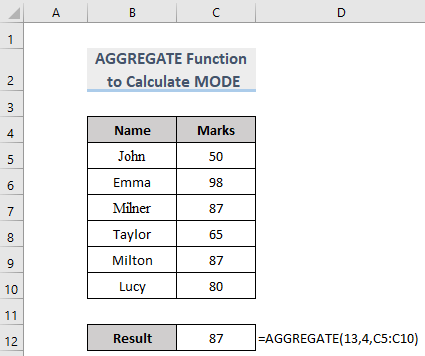 The LARGE function returns the largest number in a given sample. It has function number 14, which indicates that when we run this function with the AGGREGATE, we must include the [k] as the fourth argument. 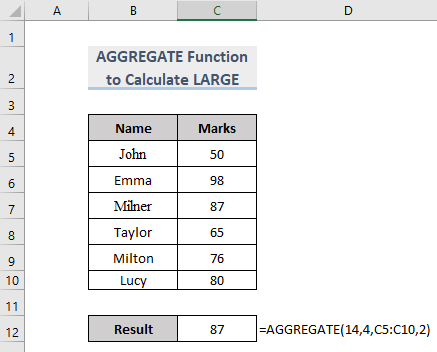 The SMALL function in Excel delivers the smallest integer in each dataset. As previously explained, while running this function with the AGGREGATE, we must put the [k] as the fourth parameter. 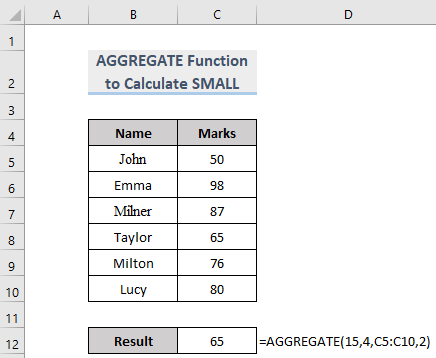 0.3= 30% of values are less than or equal to the calculated result 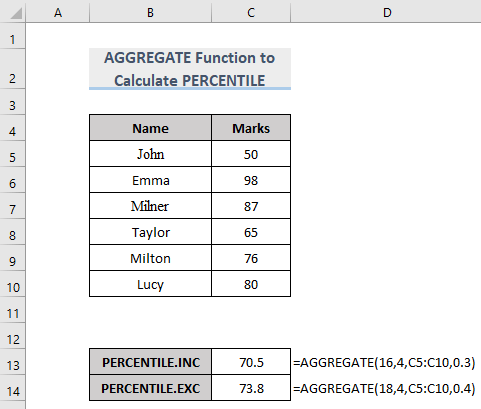 The QUARTILE function in Excel returns the quarter part (four equal groups) of a total set of data. 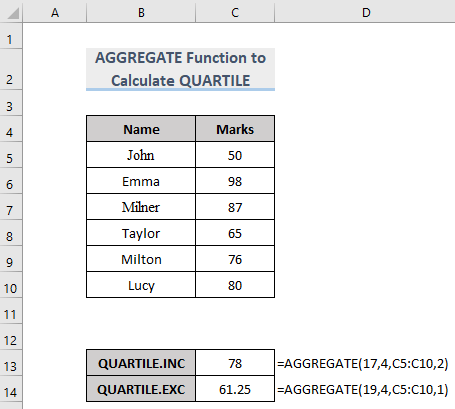 Read More: Combining AGGREGATE with IF Function in Excel (4 Examples)

To discern between AGGREGATE vs SUBTOTAL in Excel, follow these procedures and stages. You are invited to download and use the workbook for your own practice. Please post any questions, problems, or recommendations in the comments box of our blog ExcelDemy.

Hi there. I am Amit, completed my study from BUET. Currently, i am working as an Excel & VBA Content Developer at ExcelDemy. Now you can see my articles in ExcelDemy blog.

How to Use COUNTIF Function with Array Criteria in Excel