Objects and collections, Properties, Methods, and Variables in Excel VBA

Most of the objects contain other objects. Open the VB Editor (press ALT+F11) and open any existing module under Project window. We have opened ShowSumOf macro. Start writing this code Workbooks(“vba-macro.xlsm”). in the Code window like the following figure. 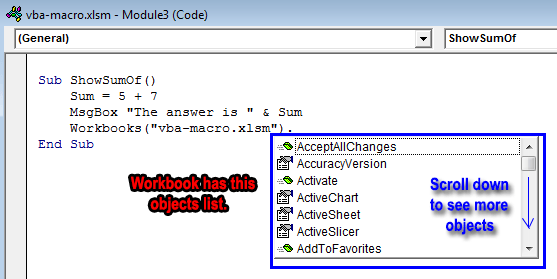 Each of these objects can contain other objects. For example, a Worksheet object can contain objects like the following list:

Some same type of objects makes a collection. For example, the collection of all Workbook objects is known as the Workbooks collection. We refer to an individual object in a collection by using a name or an index number. For example, say a workbook has three worksheets (named Sheet1, Sheet2, and Sheet3). We can refer to the first object of the Worksheets collection in either of the following two ways:

Most of the objects we work with have properties. Properties can be thought of as settings of objects. For example, a Range object has properties. Some of them are Column, Formula, Row, Width, and Value. A Chart object has properties, such as Legend, ChartArea, ChartStyle, and so on. ChartTitle is also an object, with properties such as Font, Format, and Border. Excel has many objects. Each has its own set of properties. We can write VBA code to do the following:

Note: It is interesting that Excel doesn’t have a Cell object. When you want to manipulate a single cell, you use the Range object (Range(“E10”)).

Tip: Application properties are commonly used. For this reason, you can omit this object from the VBA statement. For example, to get the row of the active cell, you can use the following statement: ActiveCell.Row

In most cases, we can refer to the same object in different ways. Assume that we have a workbook named vba-macro.xlsm and it’s the only workbook open. Furthermore, assume that this workbook has one worksheet, named Expenses. Our VBA code can refer to the Expenses sheet in any of the following ways:

If more than one workbook is open, the second or third method isn’t reliable. You have to use a specific name for the workbooks. When you are working with an active sheet, any of the last three methods would work. The first method is the best choice as this statement refers to the sheet specifically.

Objects also have methods. A method is an action implemented on an object. For example, Range objects have a Clear method. The following VBA statement clears a Range. This statement is equivalent to selecting the Range and then choosing Home ➪ Editing ➪ Clear ➪ Clear All:
Range(“A10:C20”).Clear

In VBA code, methods look like properties. Methods are connected to the objects with a separating operator (.). However, methods and properties are different concepts in VBA.

Note: Sometimes you may find that your VBA module contains an Option Explicit statement at the top of the module. This instructs you to declare all variables in the module. Undeclared variables, in this case, will result in a compile error, and your macro procedures will not run.

In the following example, the value in cell A1 on Sheet1 is assigned to a variable named InterestRate:

After the statement is executed, you can work with the variable InterestRate in other parts of your VBA code.