How to Do Simple Linear Regression in Excel (4 Simple Methods)

Let’s say we have Unit Cost vs Produced Unit data, and we want simple Linear Regression to identify what criteria really matter. 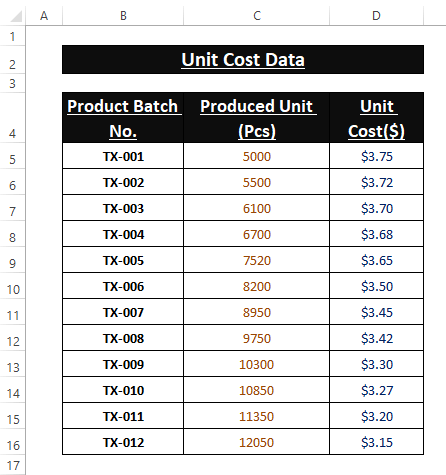 In this article, we’ll use Add-ins such as Analysis Toolpak and Solver, Excel Graph, and Formulas to do simple Linear Regression in Excel.

What Is Linear Regression?

Regression Analysis comes from Statistics and deals with predicting values that depend on two or more variables. Therefore, Linear Regression estimates values when single dependent and independent variables are concerned. It has an equation of Y=mX+C+E and the variables are

m = Slope of the Regression Formula

Ε = Error Term, the difference between the actual value and predicted value.

The error term, E is in the formula because no prediction is never 100% correct. Though some Add-ins calculate errors off-screen, we mention it to clarify the analysis. However, the Linear Regression formula becomes Y=mX+C, if we ignore the error term (i.e., E).

4 Easy Ways to Do Simple Linear Regression in Excel

To conduct Regression Analysis, at 1st we have to enable Analysis Toolpak. Afterward, we are good to run it. 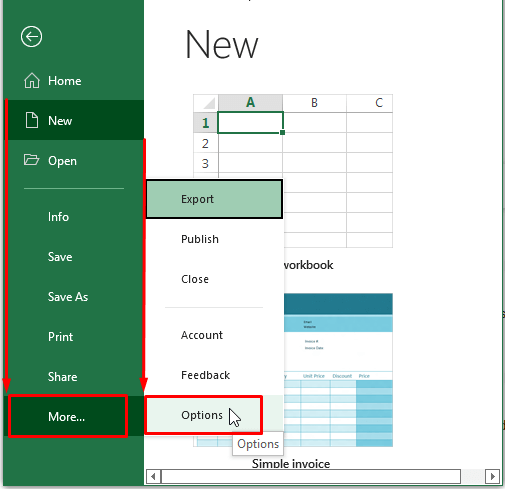 Step 2: In the Options window, Select Add-ins (on the left side of the window) > Choose Excel Add-ins (inside the Manage option) > Click on Go. 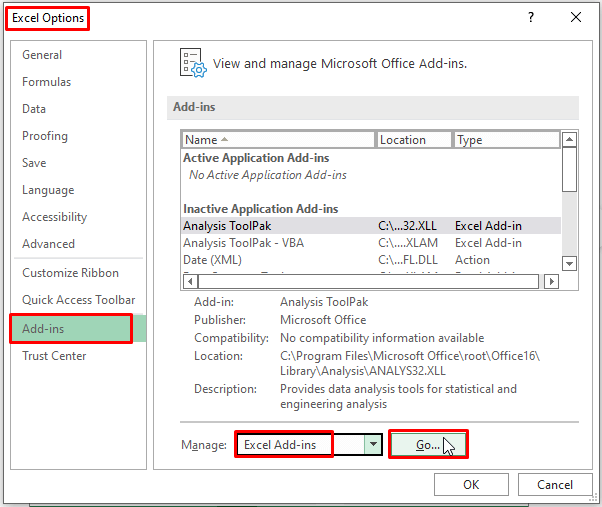 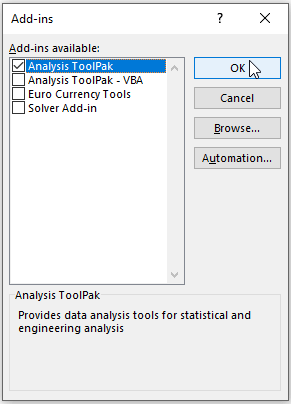 Step 4: After returning to the worksheet, execute Data > Data Analysis (within the Analysis section). 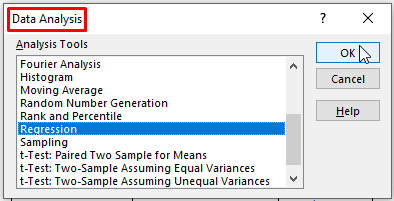 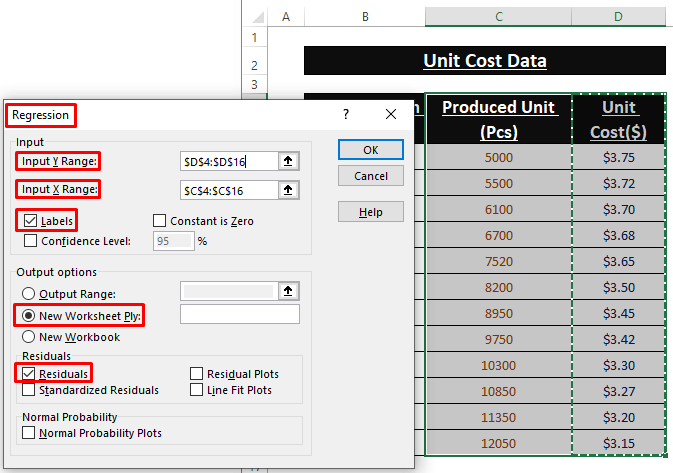 Conducting a Linear Regression Analysis in Excel is quite easy as Excel does all calculations by itself. Excel results in 4 major parts of analyzed data that hold different values of real-life usage. 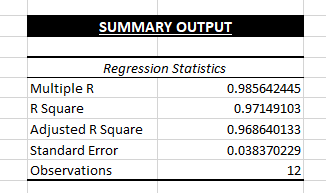 ⧭ Multiple R: It’s a Correlation Coefficient parameter that indicates a correlation between variables. Its value ranges from -1 to 1. The bigger positive the value, the strong correlative the relationships are. The values indicate:

➤ 0; indicates no bonding or relationship.

⧭ R Square: It implies the Coefficient of Determination. It indicates the scale by how well the data model fits the Regression Analysis. Also, it depicts the number of points that fall on the Regression Equation Line. It is calculated using the Total Sum of Squares. As the R2 value is 0.9714.., it implies 97.14% of the data value falls in the Regression model and the same percentages of dependent variables are relatable by independent variables. The R2 value of more than 95% is taken as a good fit.

⧭ Observations: The iteration number of the data model.

2. ANOVA Outcome: It’s the variance analysis that displays the variability of a data model.

ANOVA divides the Sum of Squares portion into parameters that give information about the shifting within the Regression Analysis. The parameters and their meaning are:

⧭ df: It’s the number of degrees of freedom (i.e., nDOF) related to the variance sources.

⧭ SS: Sum of Squares; SS is considered the good to fit parameter. The less the Residual value of SS against the Total SS value.

⧭ MS: The Mean Square is known as MS.

⧭ F: F statistic or F-test refers to the Null Hypothesis. It tests the overall significance of the regression model.

The ANOVA calculation is less important than conducting a Linear Regression Analysis. However, parameters like Significance F are important for statistically suggesting any data model whether it’s OK or Not. Significance F value less than 5% or 0.05 indicates the healthiness of a data model.

3. Co-efficient Outcome: The most useful part of Regression Analysis is the Coefficient outcome. You can simply use the coefficients to calculate Y values.

4. Residual Output: It compares the calculated values with the estimated values as depicted in the picture below. 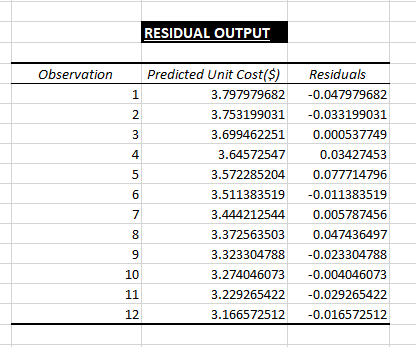 To understand the results more generic way you can visit this result interpretation article.

There is a simpler way to depict the relationship between dependent and independent variables; Excel Chart (i.e., Scatter).

Step 1: Highlight the columns (i.e., Columns C and D), go to Insert > Click on Scatter (inside the Charts section). 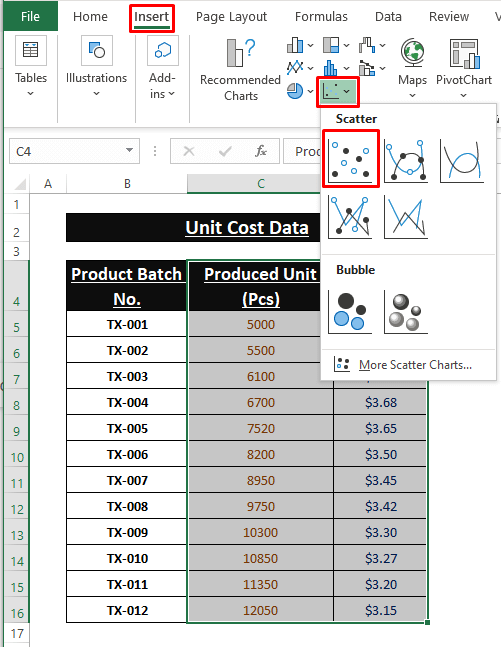 Step 2: Excel immediately inserts the Chart with scatter points. Right-click on one of the points. Select Add Trendline from the Context Menu options. 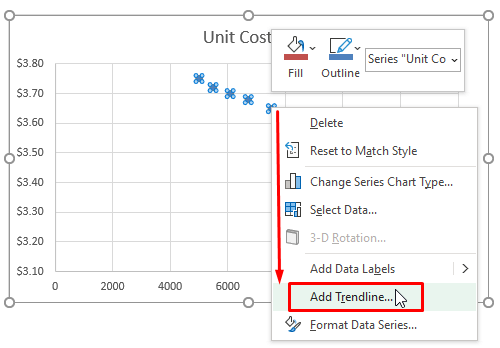 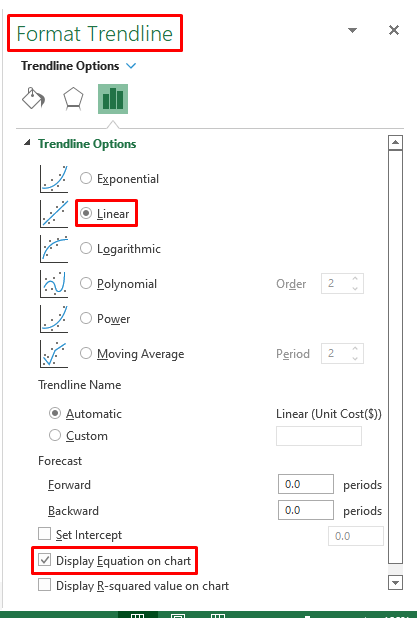 Step 4: Apply other preferred options from the Format Trendline dialog box. Also, use the Chart Element feature to furnish the Chart as shown in the below picture. 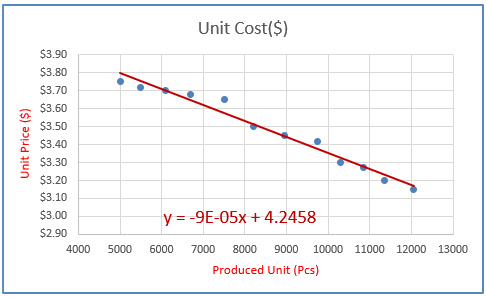 Now, you get the Linear Regression equation from the Chart and its component’s (i.e., m and C) values as expected. 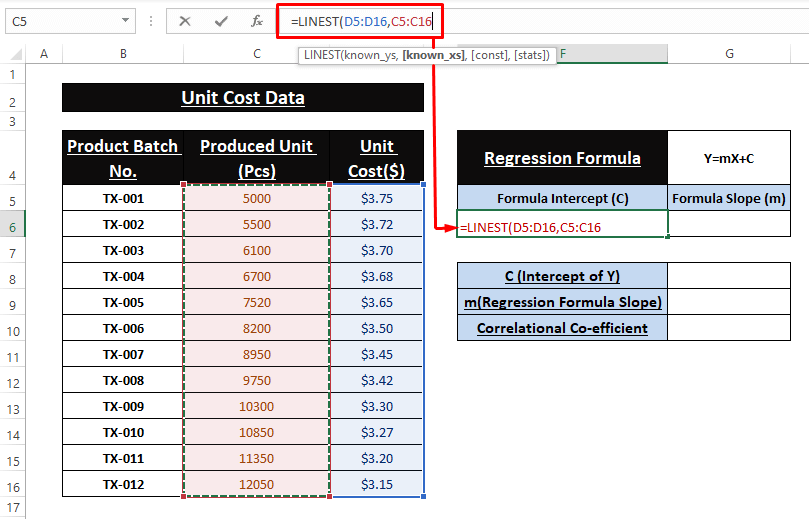 🔼 As it’s an array formula, use CTRL+SHIFT+ENTER to execute it. 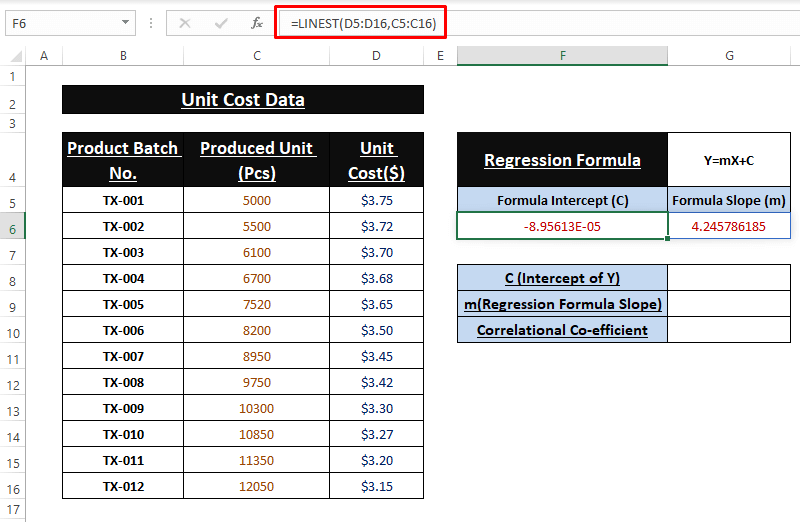 Alternatively, we can use other functions to individually calculate the components of Linear Regression equations.

INTERCEPT Function: The INTERCEPT function finds the intercept of Y-axis for the Linear Regression equation. Write the below equation in cell G8 to find the value. 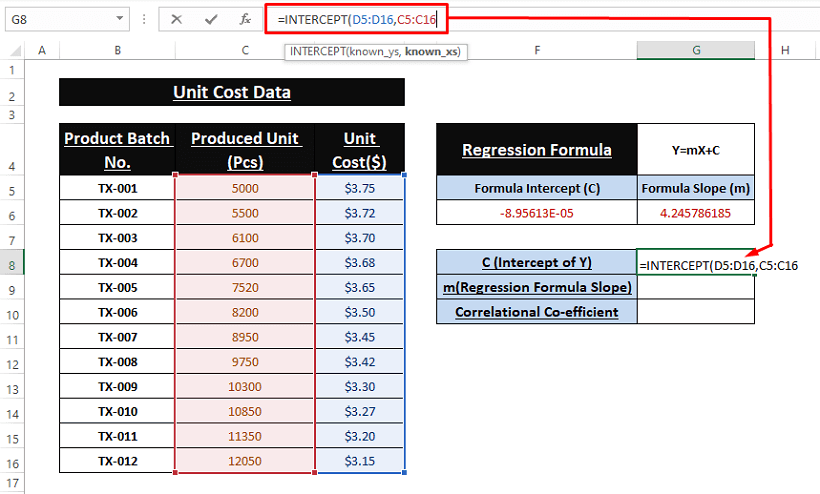 SLOPE Function: The inclination of the Linear Regression equation is depicted by the slope. Use the below formula to calculate the slope. 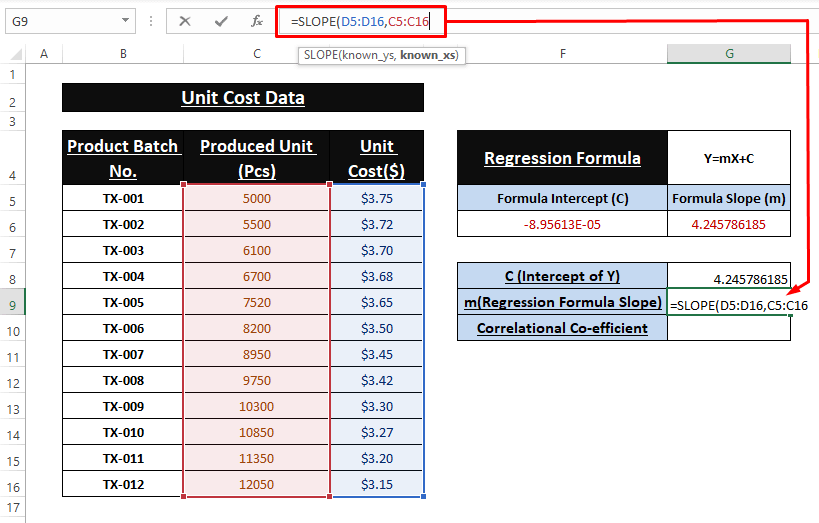 CORREL Function: We can find an additional parameter to depict how strongly those two variables are connected. Paste the following formula in cell G10. 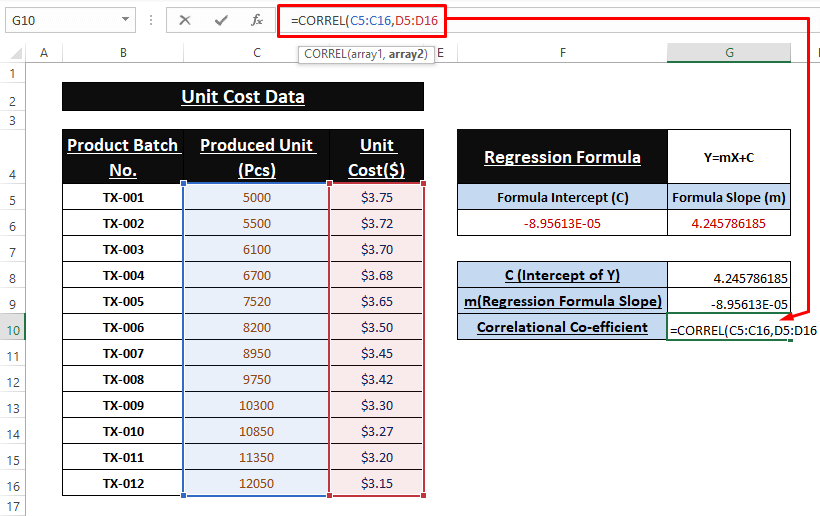 🔼 The latter image displays all the outcomes of the used formulas and thus calculating the Linear Regression. 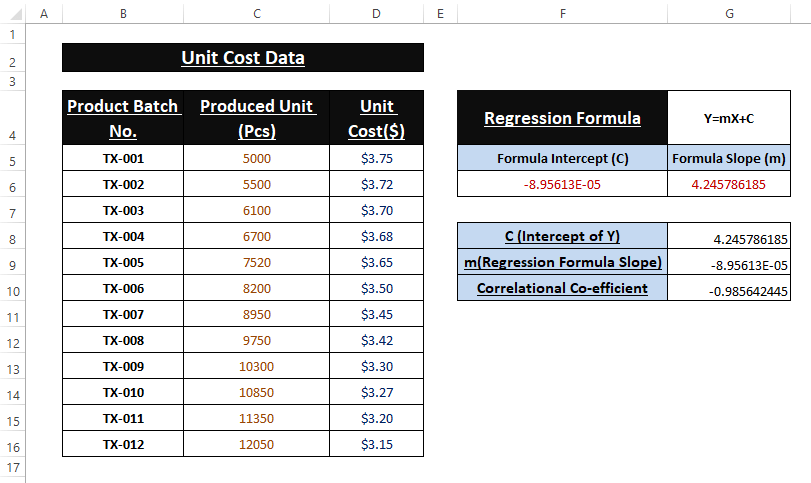 Read More: How to Interpret Linear Regression Results in Excel (with Easy Steps)

2. Calculating Ys Values: Calculate the new Ys using assumed values as shown in the below image. Use the below formula. 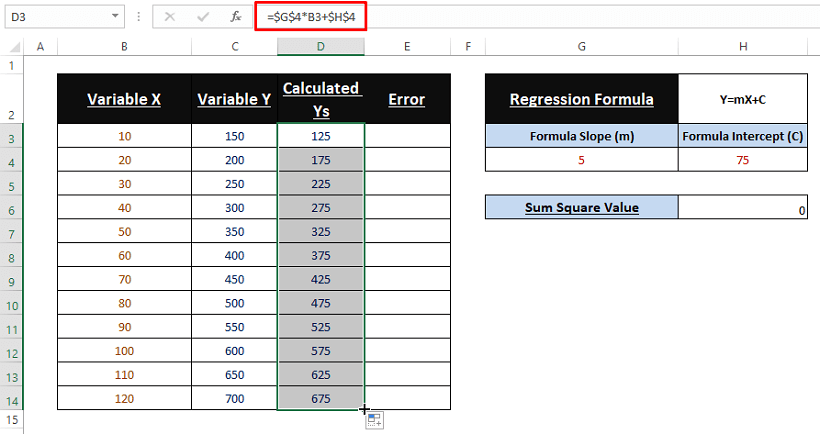 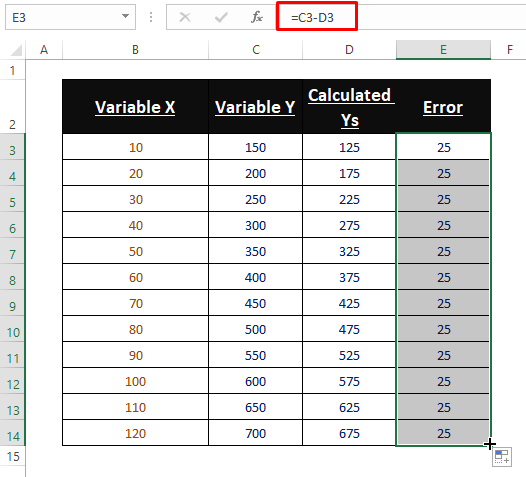 🔼 Also, find the Sum of Squares of the error column. Here, the SUMSQ function is used as a tool in Solver Add-in to minimize the error not wholly drive out. Use the following formula in cell H6. 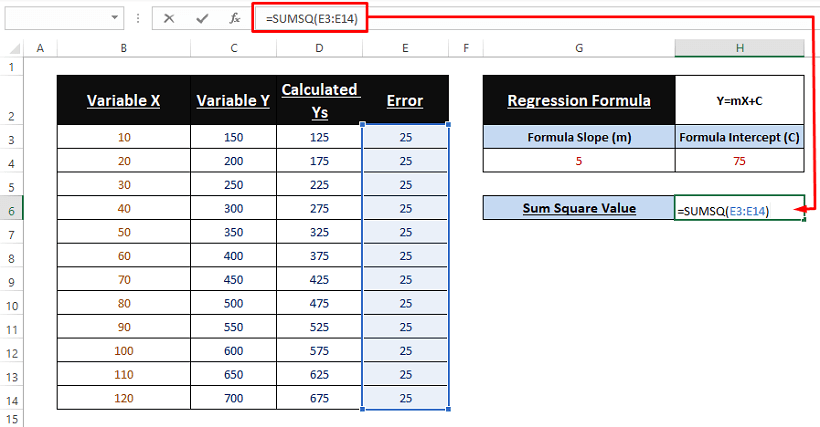 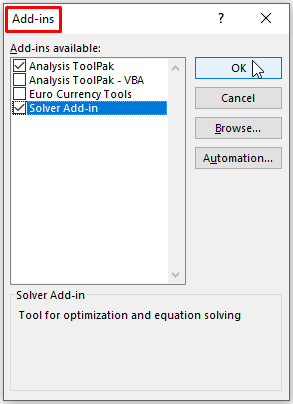 🔼 Afterward, go to Data > Click on Solver (inside the Analysis section).

🔼 In a moment, the Solve Parameters dialog box opens. In the dialog box,

➤ Assign Set Objective as H6 (where the Sum of Square value resides). 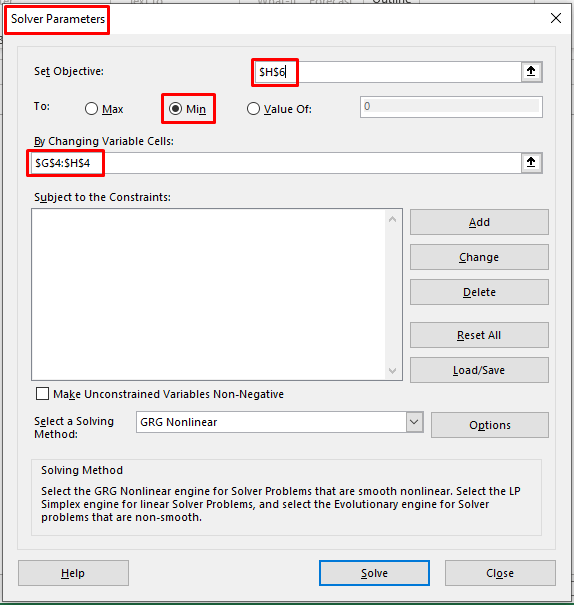 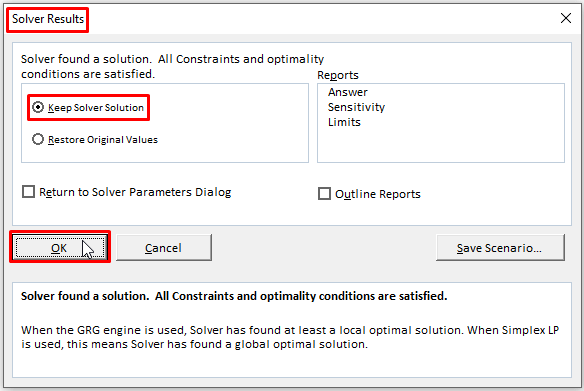 In this article, we demonstrate multiple methods to do simple Linear Regression in Excel. However, each mentioned methods have its own convenience. Hope these above-mentioned methods provide you, with your desired one to go by. Comment, if you have further inquiries or have anything to add.