How to Concatenate Apostrophe in Excel (6 Easy Ways)

While working in Excel we have to differentiate between entries using various delimiters, then concatenating the delimiter would be a handful there. In this article, we use Ampersand, functions like CONCAT, CONCATENATE, and TEXT, TEXTJOIN as well as VBA Macro Code to concatenate apostrophe in Excel. In this case, we use an apostrophe as a delimiter to differentiate between First and Last Name. 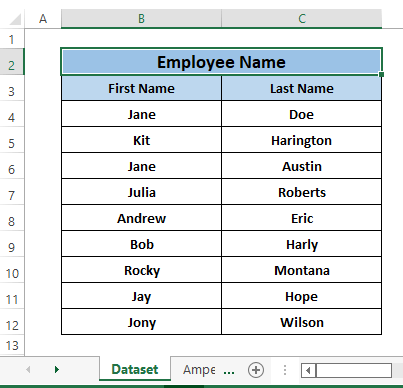 In the formula, The Quotations sit single Apostrophes on both sides of each cell reference (i.e., B4 and C4) while concatenating them as Full Name. 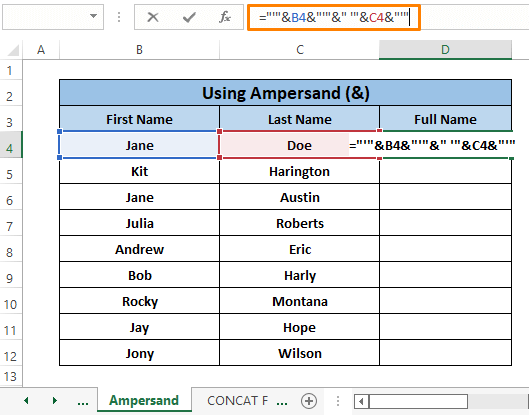 Step 2: Press ENTER then Drag the Fill Handle to come up with Full Names with Apostrophes on both sides of First and Last Names. 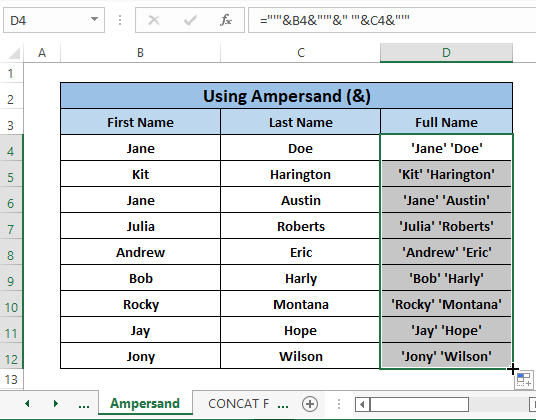 You can change the orientation of the Full Names may look like Apostrophes. You can put single or double Apostrophes between First and Last Names to declare them as different entities in Full Names.

Read More: Concatenate Not Working in Excel (3 Reasons with Solutions)

If you are using Microsoft Excel 2019 or onwards versions, you can use the CONCAT function to concatenate Apostrophes in texts. Otherwise move to the next method (i.e., CONCATENATE Function) to do the job.

The syntax of the CONCAT function is

We can use any cell references or delimiters as text in the function.

Here in the formula, we use Apostrophes (‘) as Delimiters to differentiate between First and Last Names. 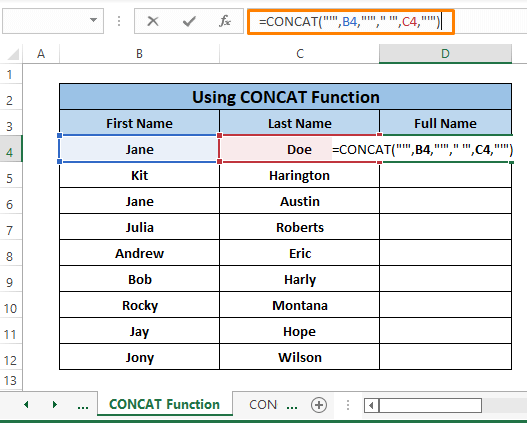 Step 2: Hit ENTER after that Drag the Fill Handle. All the First and Last Names appear with quoted Apostrophes constituting Full Names. 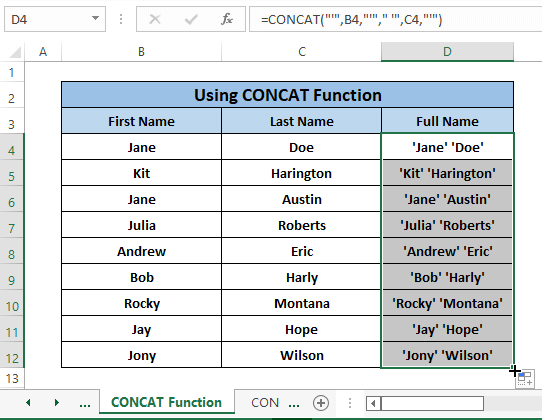 You can insert Apostrophes in positions you prefer using the CONCAT function.

In case you using Microsoft Excel’s versions prior to 2019, you can use the CONCATENATE function instead of the CONCAT function we discuss in Method 2.

The CONCATENATE function has similar syntax and arguments to the CONCAT function. 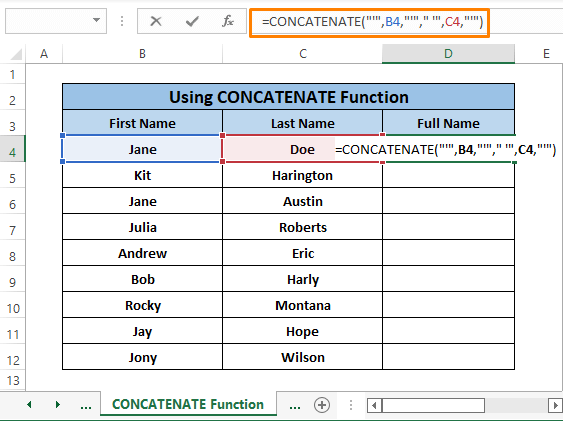 Step 2: Press ENTER then Drag the Fill Handle to come up with a similar result to the following image. 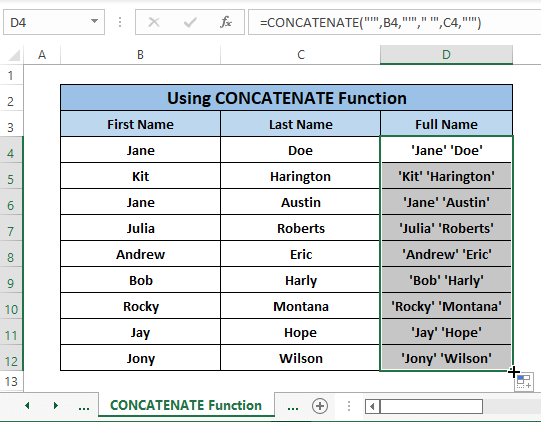 In format_text we cannot include the Apostrophe delimiter. Thus, we use Ampersands to concatenate Apostrophes in Names.

In this method, we first concatenate both First and Last Names with Apostrophes then join them to constitute Full Names.

Inside the formula, CHAR(39) is the ASCII character code number for Apostrophe. 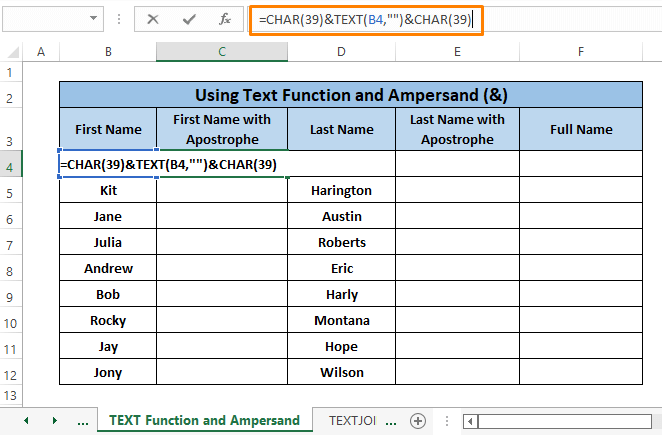 Step 2: Press ENTER and Drag the Fill Handle to insert Apostrophes on both sides of the First Names. 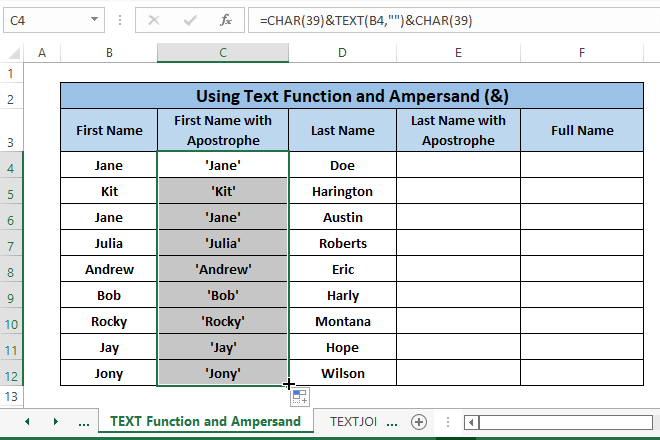 Repeat Steps 1 and 2 to do the same thing with Last Names. After repeating Steps 1 and 2, the outcomes will be the same as the image below. 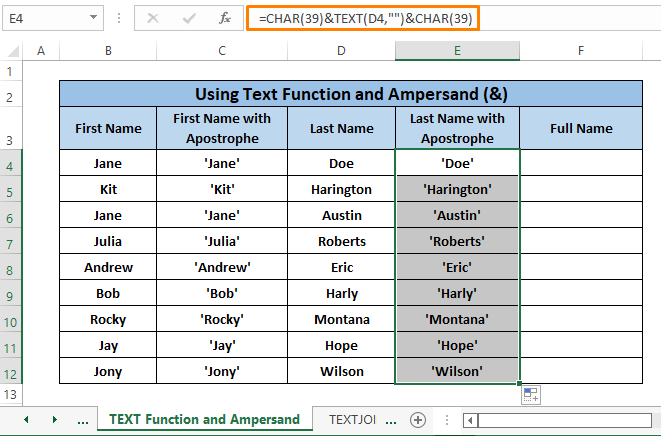 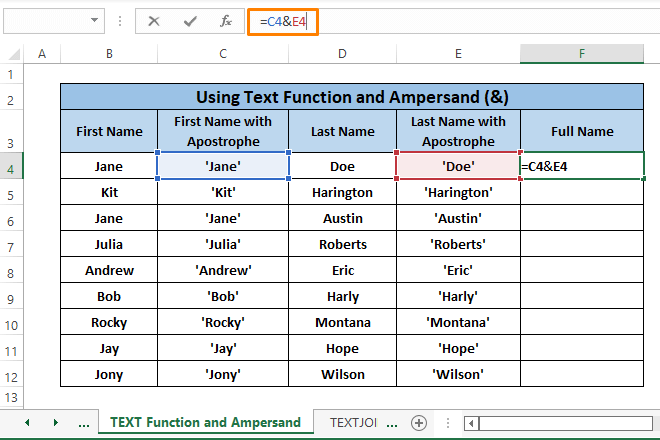 Step 4: Hit ENTER and Drag the Fill Handle to form the Full Names with Apostrophes. 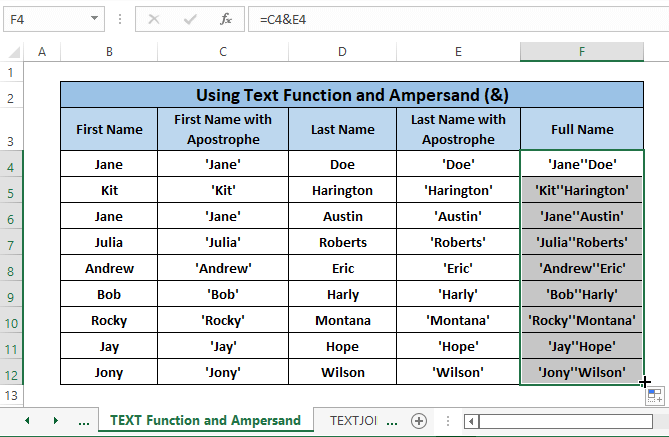 Read More: How to Combine Text from Two or More Cells into One Cell in Excel (5 Methods)

Another function we can use is TEXTJOIN. The syntax of the TEXTJOIN function is

delimiter; is a string that sits between the text references.

ignore_empty; decides whether empty values are considered in the results. Selecting TRUE ignores the empty values and FALSE otherwise.

In this case, we just use two Apostrophes between Names to differentiate.

“‘ ‘”; double Apostrophes is the delimiter.

TRUE; is the ignore_empty.

B4,C4; are the text references. 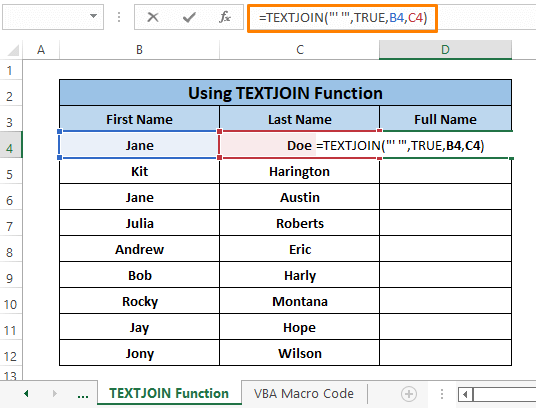 Step 2: Press ENTER then Drag the Fill Handle to bring up the Full Names with Apostrophes in between Names. 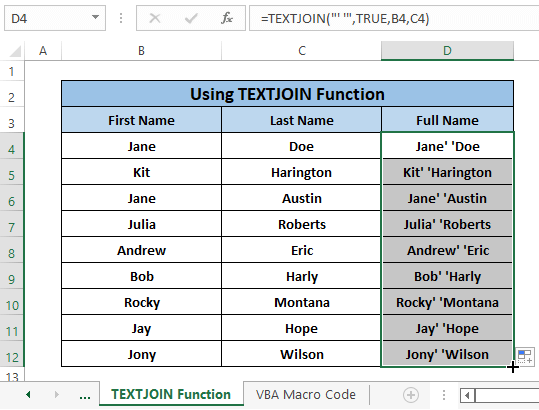 You can place single or multiple Apostrophes between Names as delimiters.

We can place Apostrophes on both sides of First and Last Names by running a couple of lines of Macro Code.

Step 1: Select both the First and Last Name columns. 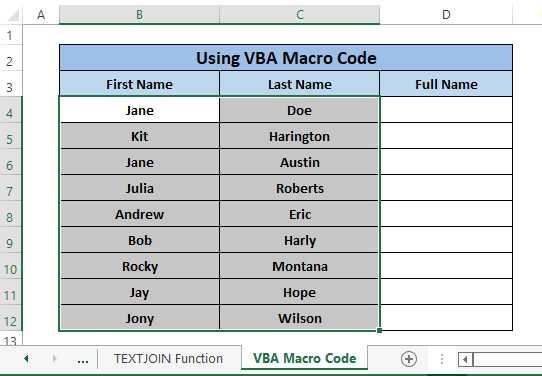 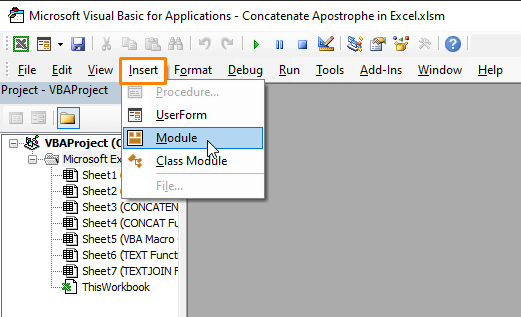 Step 3: In the Module, Paste the following Macro Code. Press F5 to run the Macro Code. 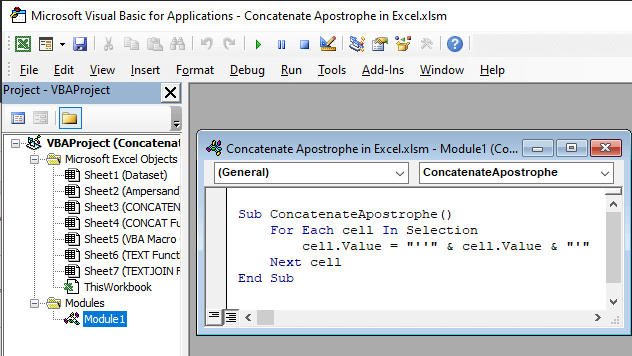 Step 3: Back to the Worksheet, you’ll see both Names are quoted with single Apostrophes on both sides.

Paste the following formula in any cell (i.e., D4). 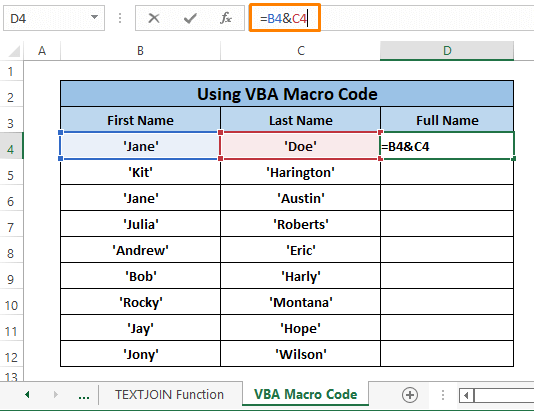 Step 4: Press ENTER then Drag the Fill Handle to form the Full Names with Apostrophes. 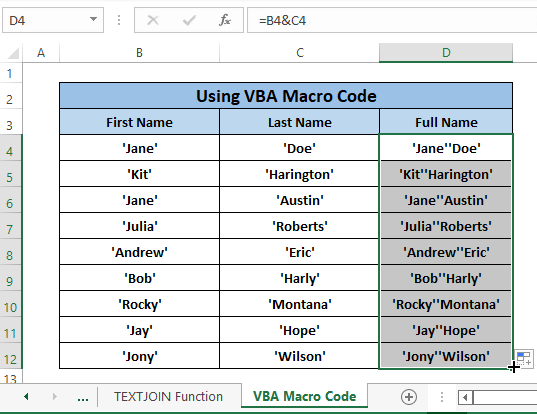 Read More: How to Concatenate String and Integer using VBA

In the article, we use Ampersand (&) and multiple functions such as CONCAT, CONCATENATE, TEXT, and TEXTJOIN as well as VBA Macro Code to concatenate apostrophes. Ampersand (&) joins entries as well as delimiters. The CONCAT and CONCATENATE functions concatenate cell references along with delimiters like Apostrophes. The TEXT function does this job combining with Ampersands. The TEXTJOIN function takes Apostrophes as delimiters and concatenates Names. I Hope the above-mentioned methods do the jobs you seek. Comment, if you need further queries and have something to add.