How to Use TRUNC Function in Excel (4 Examples)

The TRUNC function in Excel truncates a number to a specified number of digits. It is under the category of Excel Math and Trigonometry function. The function is mainly used for removing the decimal parts from a number. 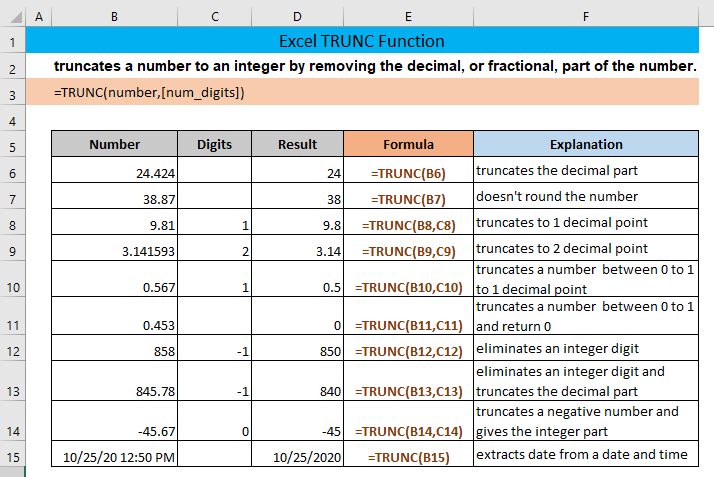 From the above image we can get a general overview of the TRUNC function. Throughout the article we will see the details of this function.

Introduction to the TRUNC Function

Excel TRUNC function truncates a number to an integer by removing the decimal, or fractional, part of the number. 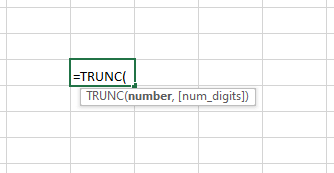 Now, we will see different examples where various applications of the TRUNC function are shown.

1. Remove Decimal Parts of a Number

The formula will truncate the number of the cell B5 in such a way that there will be no decimal parts in the returned number. 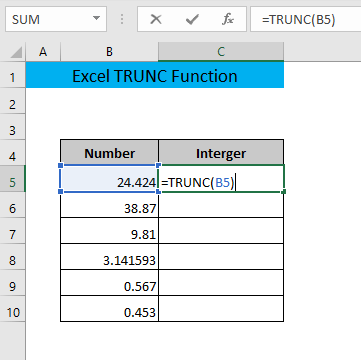 ➤ After that, press ENTER.

As a result you will get the integer part of the number of cell B5 in cell C5.

➤ Now drag the cell C5 to the end of your dataset to apply the same formula for all of the numbers. 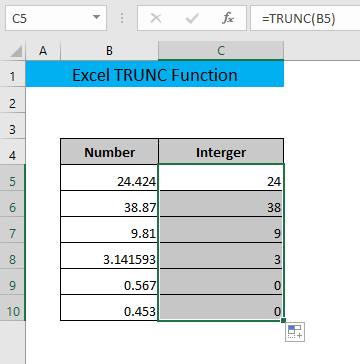 If you observe you can see that the TRUNC function returns zero for any number between 0 to 1.

We can use other functions such as Excel INT function, Excel ROUND function or Excel ROUNDDOWN function instead of the TRUNC function to remove decimal parts of a number. The application of these functions for this example are shown in the image below.

2. Shorten a Number to a Specific Digit with TRUNC Function

Excel TRUNC function can be used to shorten a number to a specific digit. Let’s say, we have some numbers in our dataset in column B and the number of digits we want after the decimal point are given in column C. Now, we will use the TRUNC function to shorten these numbers to specified digits.

The formula will shorten the number of cell B5 to the specified digit of cell C5 and will return the shortened number in cell D5. 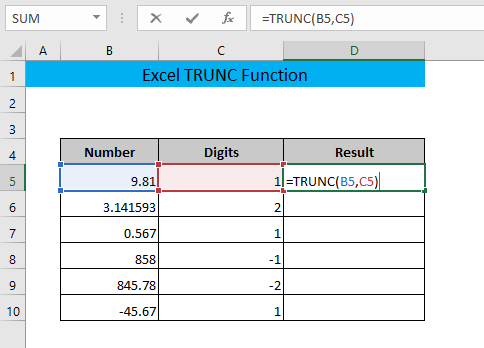 And we will get the shortened number in cell D5.

➤ At last, drag the cell D5 to the end of your dataset.

As a result, we will get all the numbers shortened to the specific digits we have mentioned in column C. 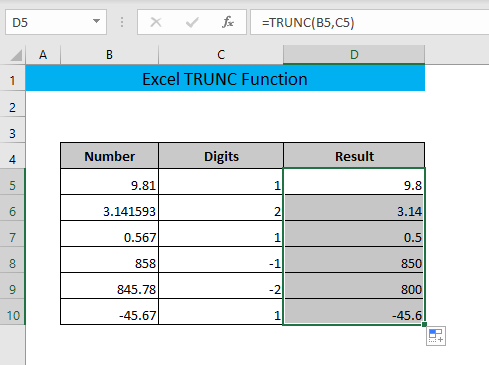 If you observe carefully you can see cell C8 and C9 have negative numbers as the digits. The formula eliminates digits from the integer part of the number and returns 0 at that place when the specified digit is negative.

3. TRUNC Function to Remove Time from Date and Time Cells

TRUNC function can also be used to remove time from date and time cells. Suppose at this time we have some dates and times in our dataset. We want to remove the time part and extract only the date part from these dates and times.

The formula will truncate the time portion from the date and time of cell B5. 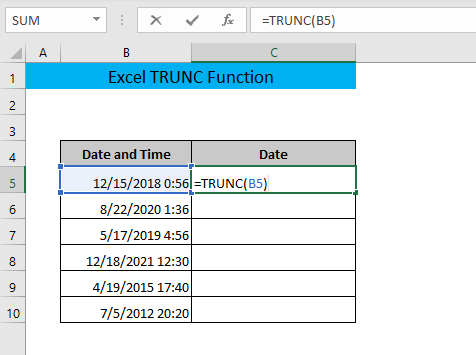 ➤ After that, press ENTER

As a result, you will see the time portion is showing 0:00 in cell C5. 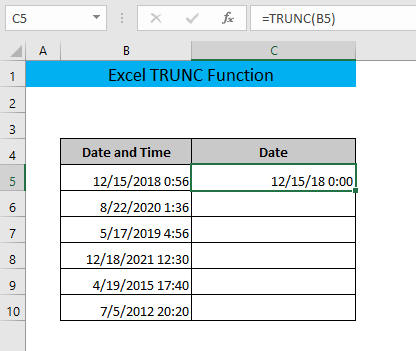 ➤ Drag the cell C5 to the end of your dataset to apply the same formula for all other dates and times. 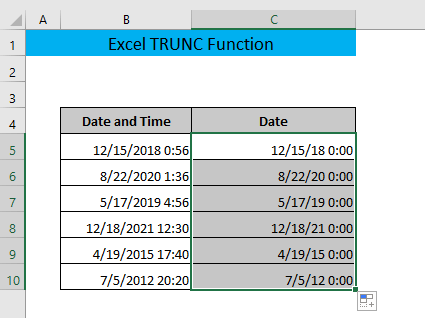 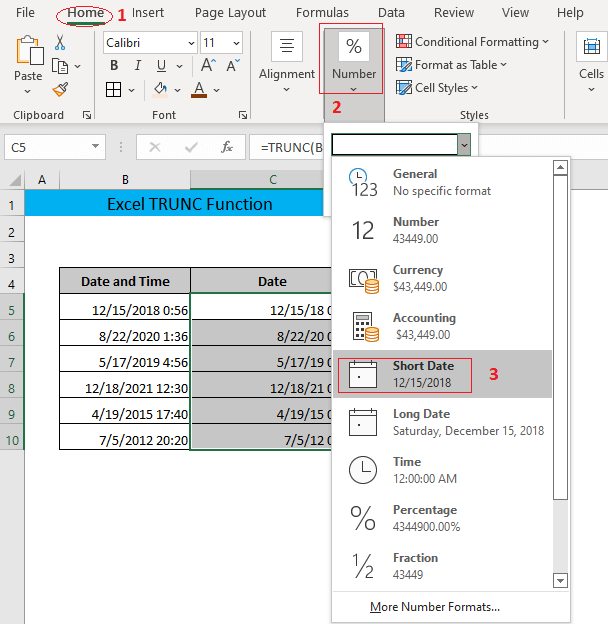 As a result you will see 0:00 is removed from the cells. Now, we have only the dates. 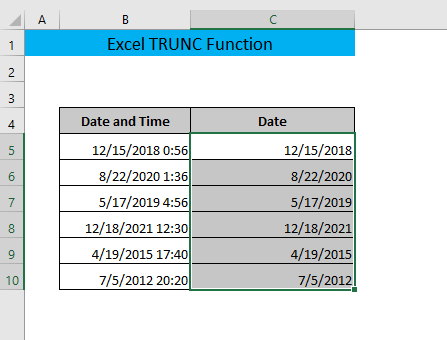 TRUNC is not a part of the application.worksheetfunction. As a result, it can’t be utilized in  Excel VBA. But, we can apply the FORMAT function to achieve the same result. Suppose we have the following dataset where we want to convert the number with two decimal points. 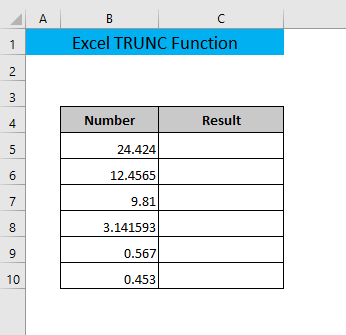 To do that first,

➤ Insert the following code in the Immediate box line by line and press ENTER after every line.

The code will return the numbers of column C with two decimal points in column D. 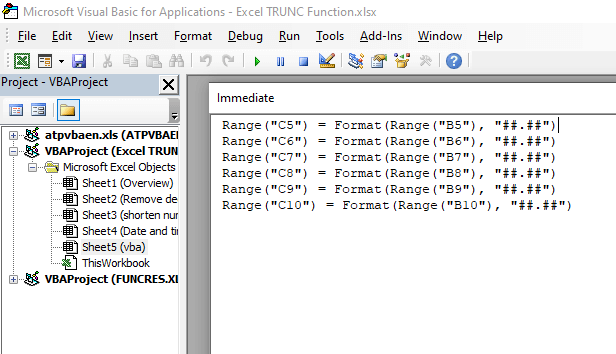 Now, you will see the numbers with two decimal points in column C. 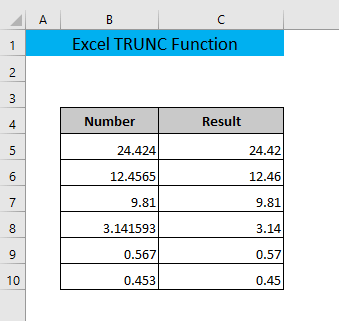 📌 The TRUNC function will give #VALUE! error, if you give input in text format.

I hope now you know how the Excel TRUNC function works and how to apply the function in different conditions. If you have any confusion please feel free to leave a comment.