While working on a large dataset or a series of datasets where those takes up so many rows in a spreadsheet, it is a very common situation where we need to find the column number we are in. Such as we want the number “235” to know instead of column “IA”. If that is the case, you have come to the right place. This tutorial will show you how to convert column letter to number chart in Excel, which you can also use to find out column numbers of random cells.

Download the workbook with all the formulas and VBA code from the link below. Try downloading and practicing while you go through the steps.

We are mainly going to use formulas combining different functions that will help us determine the column numbers. We can use different combinations for that. Also, we can create our customized function using VBA that can convert column letter to number chart in Excel.

To demonstrate every method, we are going to convert the column letter to a number from the following chart in Excel. 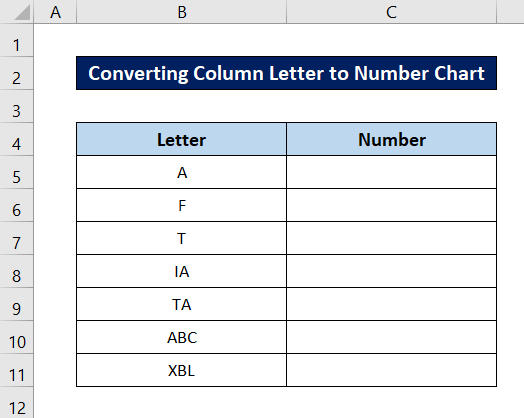 In the first method, we are going to use a formula with the combination of the COLUMN and INDIRECT functions. The COLUMN function takes a reference cell as an argument and returns the column number. This is the main function that will help us convert column letter to number chart in Excel. Meanwhile, the INDIRECT function is generally applied to store a cell reference and then use the reference value in other functions to perform multiple operations.

Follow these steps to see how you can use the formula for this dataset. 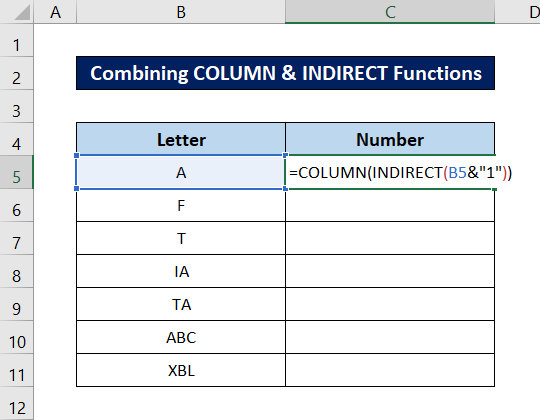 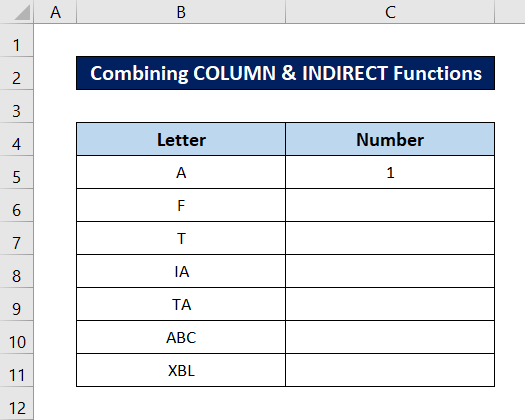 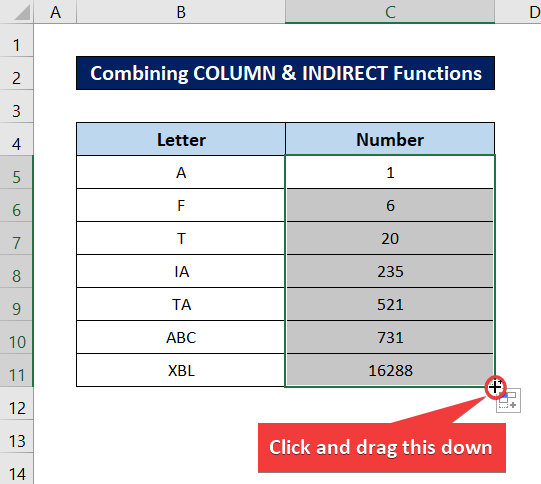 Now you will have all column letters converted to a number chart in Excel.

🔍 Breakdown of the Formula

👉 While INDIRECT(B5&1) takes the previous output and concatenates 1 to the string to make it A1.

Read More: How to Convert Column Number to Letter in Excel (3 Ways)

We can also combine the MATCH and ADDRESS functions with the previously used COLUMN function to achieve the same result. The MATCH function takes the lookup value and the lookup array as its primary arguments and match type as optional arguments. It returns the relative position of the match in the array. While the ADDRESS function creates cell reference as text from the given row number and column number. The function takes these two numbers as its arguments. And as mentioned earlier, the COLUMN function takes a cell reference as an argument and returns the column number the cell is in.

Follow these steps to see you you can use the combination to convert excel column letter to number in a chart with this dataset. 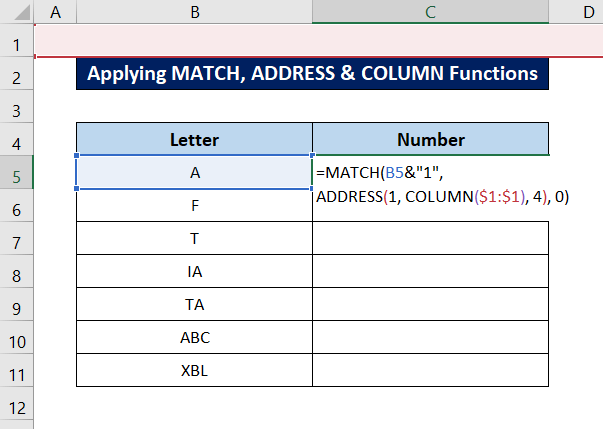 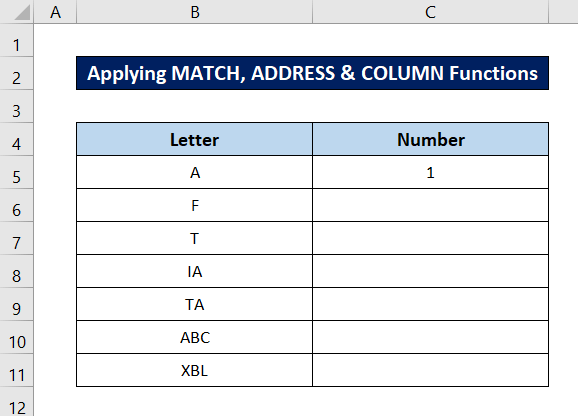 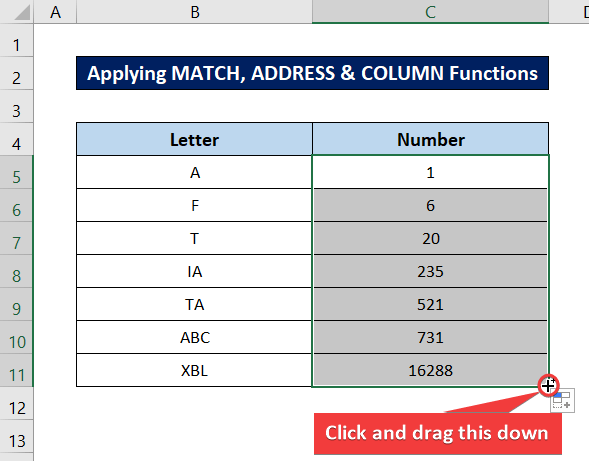 🔍 Breakdown of the Formula

👉 Firstly, COLUMN($1:$1) indicates all the columns in the first row.

Read More: How to Reference Cell by Row and Column Number in Excel (4 Methods)

Instead of combining the COLUMN function with different functions to create a formula, the function itself can convert column names into numbers. But keep in mind that, It has to take the column name directly as an argument. In the previous methods, we were doing that indirectly anyway. But those were suitable for the dataset in question.

To use the COLUMN function solely to convert column names to numbers, our dataset must look something like this instead. 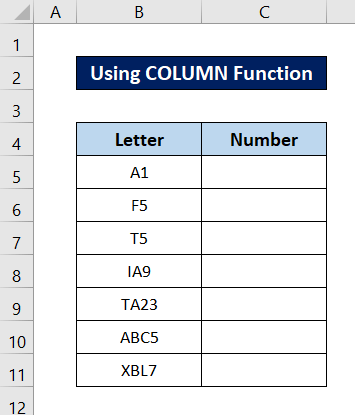 Follow these steps to convert every letter to a number in the chart in Microsoft Excel. 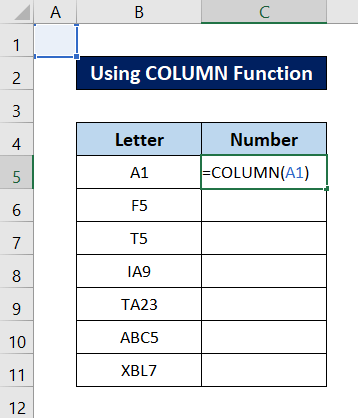 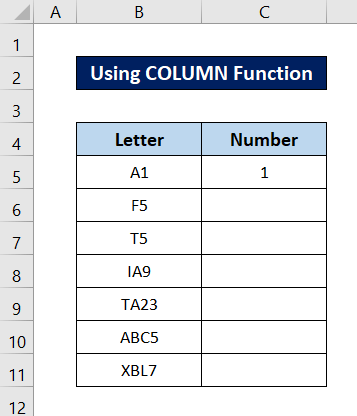 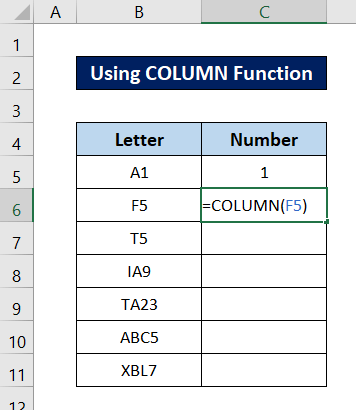 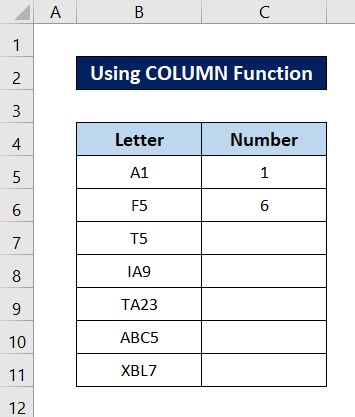 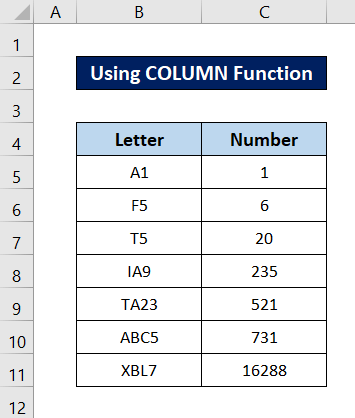 This is another way you can convert column letter to a number chart in Excel.

As you have seen from the previous methods, you can’t use a single function to directly convert letter to number chart in Excel. You either have to use formulas using a combination of functions, or use cell reference (the whole cell name) in the column property of a range. This is where the Microsoft Visual Basic for Applications (VBA) comes in handy.

With the help of VBA, we can easily define and create our own custom functions that can do certain jobs for us. And creating one that can convert column letter to number chart in Excel is no exception. But first, you need to enable the Developer tab to use the code.

Once you have the Developer tab showing on your ribbon, follow these steps to create your customized function that can convert letter to number chart in Excel. 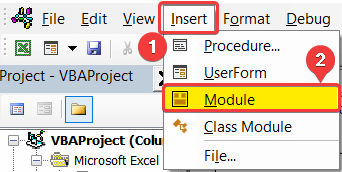 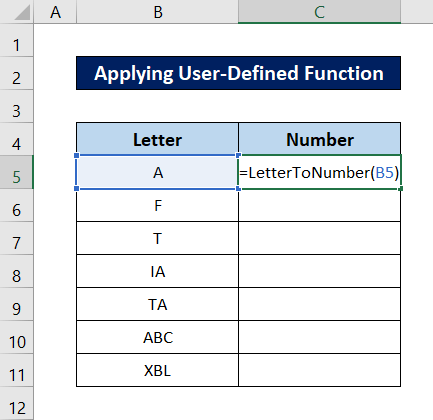 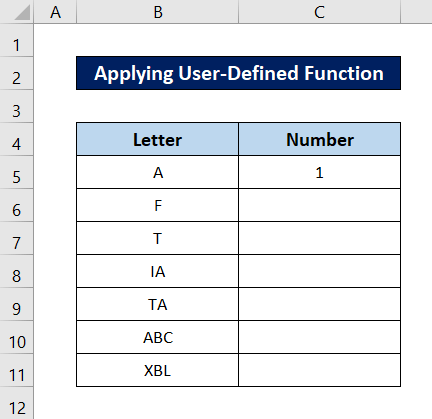 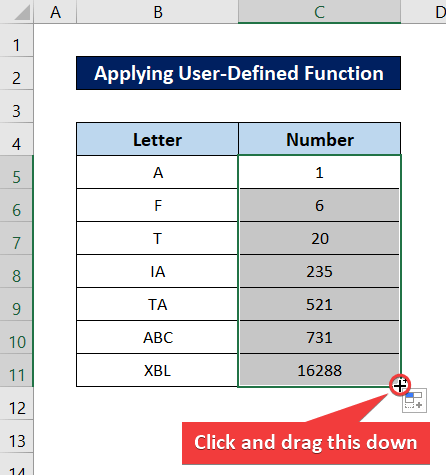 This is how you can use VBA to define a custom function that can convert column letter to number chart in Excel.

👉 The COLUMN function can only take the whole-cell reference as an argument. Entering just column letters will result in an error.

👉 If you only use the COLUMN function to convert a letter to a number, add a random number at the end of the letter in the argument. As all row numbers eventually will be in the same column number, it won’t mess up the result. Instead, it will help to eliminate the error.

👉 Using the COLUMN function without any argument will only return the column number of the cell you are entering the formula into.

👉 Although only defining a function using VBA is relatively safe, it is always a good idea to save your worksheet before working with VBA codes.

These were all the methods you can use to convert Excel column letter to number chart. Hopefully, you can convert your own chart easily from letters to numbers now. I hope you found this guide helpful and informative. If you have any questions or suggestions, let us know below.

How to Cut Multiple Cells in Excel (3 Simple Methods)

How to Add Draft Watermark in Excel (3 Easy Ways)

How to Swap Columns and Rows in Excel (6 Easy Methods)