How to Do Variance Analysis in Excel (With Quick Steps)

What Is ANOVA (Analysis of Variance) in Statistics?

Analysis of Variance (ANOVA) is a statistical method that divides the observed possible factors within a dataset into two sections:

Data Analysts employ the ANOVA test to examine the impact of independent factors on the dependent variable. So, they can decide which factors to take for further analysis and which to reject.

The Formula for ANOVA Is:

MST=Mean sum of squares due to treatment

MSE=Mean sum of squares due to error

The Outcome of Analysis of Variance ANOVA

ANOVA is the first stage in determining which factors influence a particular data set. After the test is completed, an analyst does extra testing on the methodological factors that measurably impact the inconsistency of the data set. And he uses the ANOVA test findings in an f-test to create extra data that is relevant to the proposed regression analysis. The ANOVA test compares more than two data sets at the same time to see whether there is a link between them.

ANOVA is of two types: One-way or unidirectional and Two-way. The way relates to the number of independent variables in a variance analysis test.

Steps to Do Variance Analysis in Excel with One Way ANOVA

To do variance analysis, you should have a data set first. Here, suppose you have a dataset that contains data on the satisfaction level of people in various professions. Here is a list is shown of 9 people from each profession. 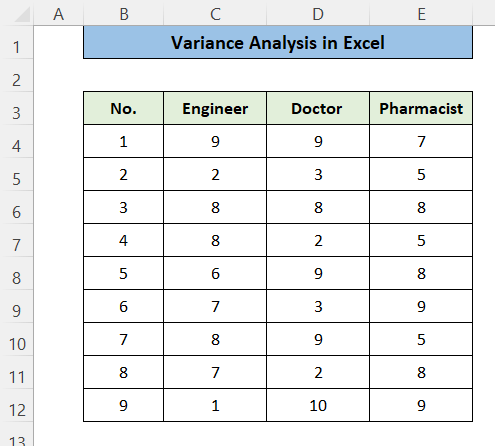 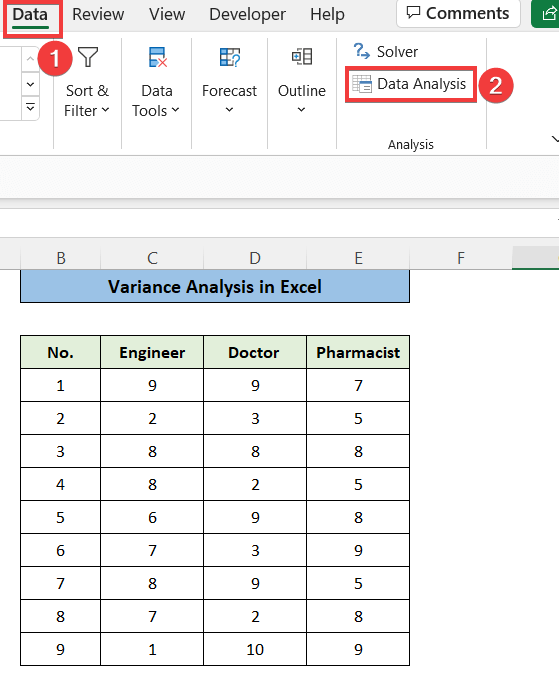 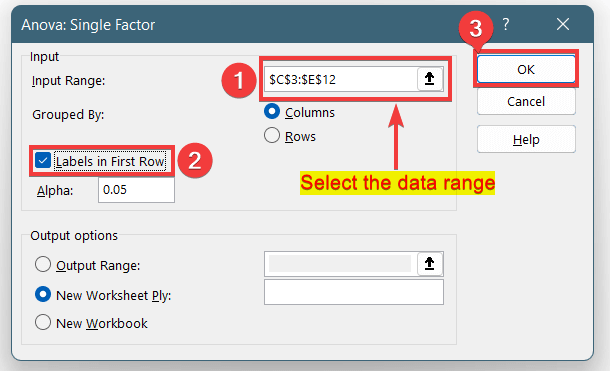 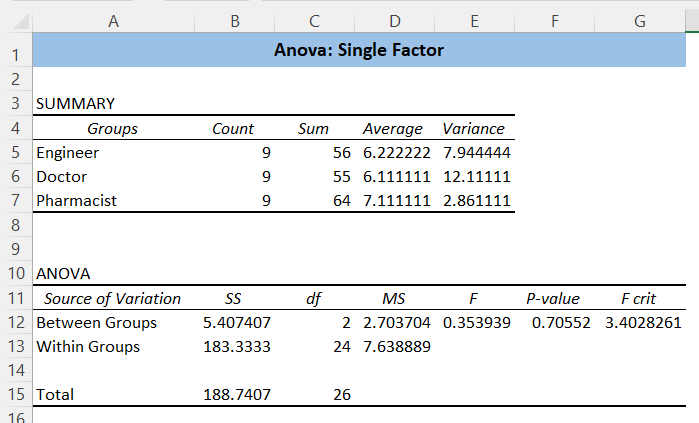 Read More: How to Calculate Variance in Excel (Easy Guide)

Steps to Do Two-Way Variance Analysis in Excel

Suppose you have some data on student attendance in a school. There are two shifts in that school. You have found some clue that there is some effect of the day temperature on the presence of students but it also varies in shifts. You want to Data Analysis of the ready data to find a relation between the attendance and shift and temperature. I am showing the steps below. 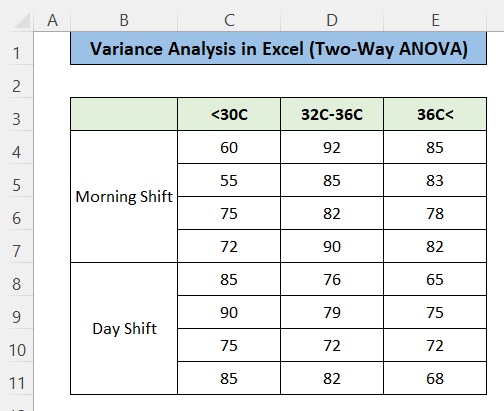 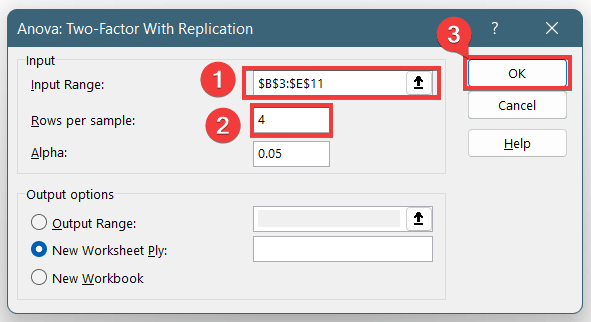 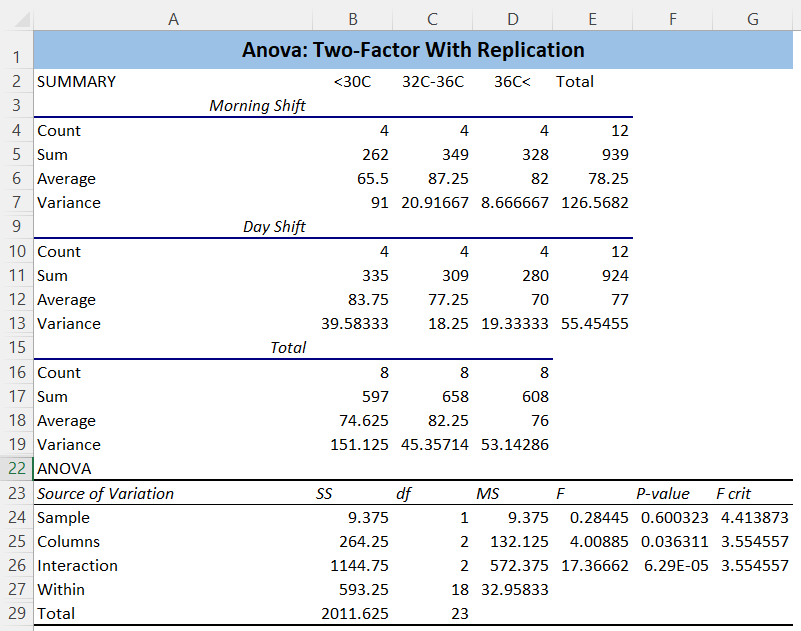 Here, the first tables, there are showing the summary of shifts. In brief: 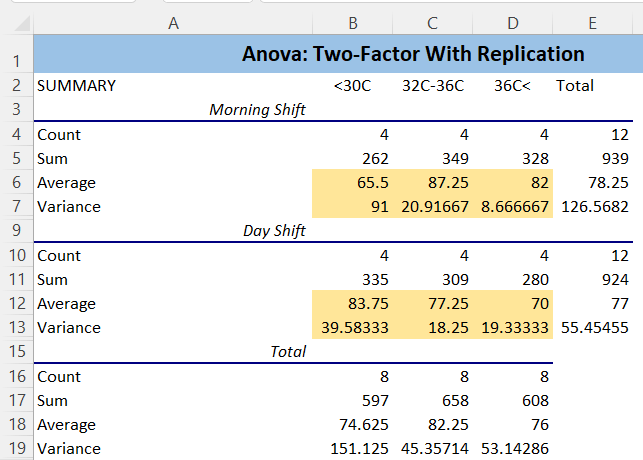 And in the ANOVA part, you can summarise the interactions and the individual effects. In brief:

What to Do When Data Analysis Tool Is Not Showing? 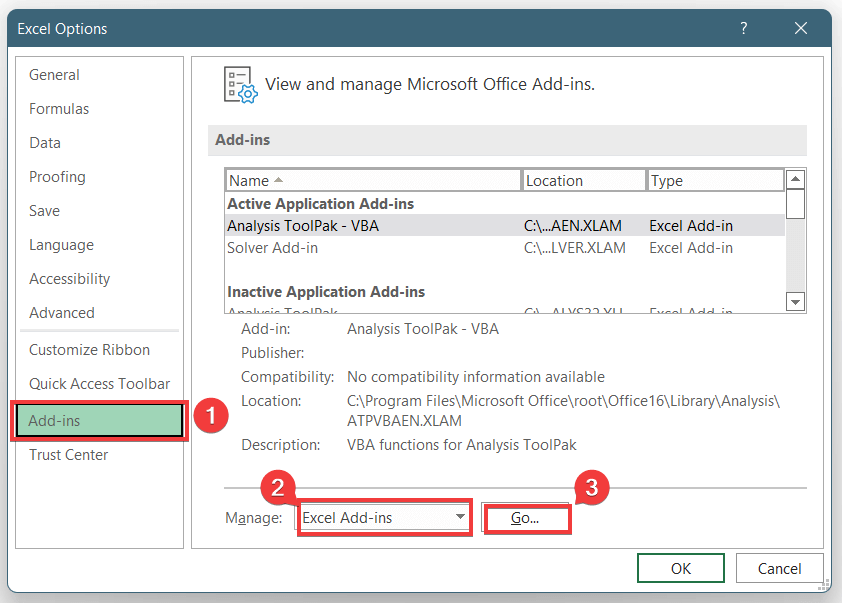 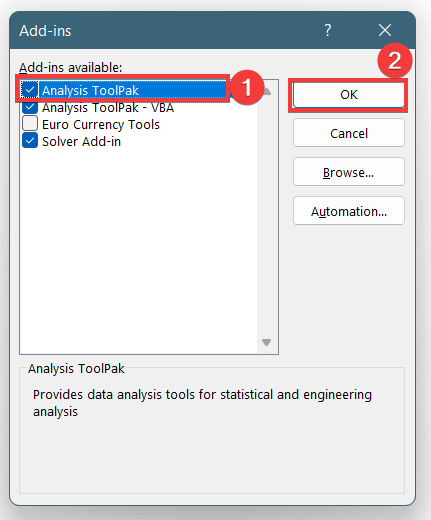 In this article, you have found how to do variance analysis in Excel. I have shown both one-way ANOVA and two-way ANOVA to do the variance analysis in Excel. You can download the workbook for free and practice them yourself. I hope you found this article helpful. You can visit our website ExcelDemy to learn more Excel-related content. Please, drop comments, suggestions, or queries if you have any in the comment section below.

I am Ridwan, graduated from Naval Architecture and Marine Engineering Dept, BUET, currently residing in Dhaka, Bangladesh. And my passion is to grow up my skillsets with industry demands. My prime goal is to be a data analyst as I do love to solve problems and play with data.