How to Calculate Ratio Between Two Numbers in Excel (5 Ways)

5 Ways to Calculate Ratio Between Two Numbers in Excel

We have made a typical dataset of the Score of Peter and Jane based on different Subjects. The dataset is given below: 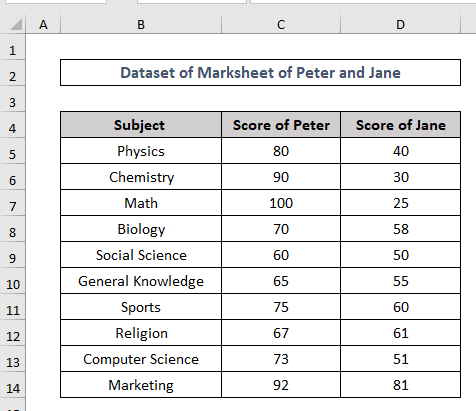 Now, we shall see the procedures and formulas to calculate the ratio of different subjects’ Scores for Peter and Jane.

In the beginning, we can use the simple divide method when two values are divisible. Among them, one can be larger than the other, or both of the numbers can be equal. In Row 5 of the dataset, the Score of Peter and Jane in Physics are 80 and  40 respectively. Here, the larger value is 80 and the smaller value is 40. 80 is 2 times larger than 40 which means 80 is divisible by 40. So, we can easily use the following method to calculate the ratio.

Here, C5 and D5 cells refer to the Score of Peter and Score of Jane respectively.

Read More: How to Calculate Ratio of 3 Numbers in Excel (3 Quick Methods)

2. GCD Function to Calculate Ratio Between Two Numbers in Excel

For using this method, we first have to understand the GCD function to find the GCD. In the picture, the GCD of two numbers in Row 5 i.e the Scores of Peter and Jane in Biology are 70 and 58 respectively. So, we can find the GCD by using the formula:

Here, C5 is the starting cell of the Subject.

Now, the formula for finding the ratio using the GCD function for the F5 cell is as follows.

NOTE: The GCD function only works with integers.

The formula appears to be difficult, but it is actually fairly simple. This is how it works:

The GCD function is used to find the greatest common divisor (GCD) of the two numbers on the left. The GCD is then used to split the first integer. The identical operations are performed with the second number on the right.

Read More: How to Convert Percentage to Ratio in Excel (4 Easy Ways)

This formula also needs a GCD function. Rather it works in the same way as only using the GCD function. Here, we can add the CONCATENATE function as an extra to make the formula stronger. We can write the formula to find the ratio of the Scores Peter and Jane for Physics like this. 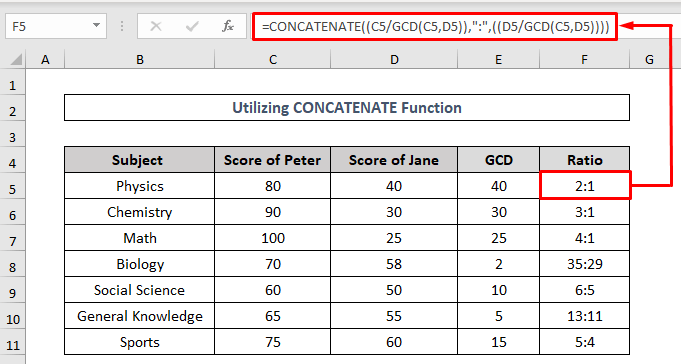 This function first works only using the GCD function which we have explained in the previous method. Finally, the right and left operations are joined together using the CONCATENATE function with the colon (”:”) as a separator.

It is the combination of two effective functions. This method works like a charm just like the GCD function. Here we have the below values to calculate the ratio. The formula for the two values in the E5 cell to find the Ratio is.

5. Employing ROUND Function to Calculate Ratio Between Two Numbers in Excel

The ROUND function is a very effective function to calculate a ratio when we want to find out rations with decimals for accurate comparison.

Here, we will deal with values that are not divisible and will find out the ratio by directly dividing the larger value by the smaller value. This will give the output converting the smaller value as 1. We will simply make an output of ration in decimal form.  We can write the formula to find the ratio of the Scores of Peter and Jane in Religion like this.

Here, C5 and D5 refer to the Scores in the Religion of Peter and Jane respectively.

We can split this formula into two different parts to understand it.

Hello, myself Shajratul Alam Towhid. Basically, I am a Naval Architect who wants to expand knowledge in the field of Microsoft Excel. I wish all of my articles will be beneficial for the readers.