How to Calculate Average Ratio in Excel (2 Simple Ways)

We calculate average in order to have a linear connection between the variables. Sometimes, we face the necessity of calculating the average of the ratios to have a certain pattern. In this article, we are going to discuss how to calculate Average Ratio in Excel.

For more simplification, we are going to use a Dataset containing Products, Sales in January, and Sales in February columns. 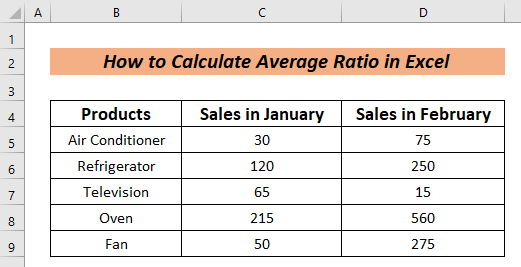 There is an amazing function named GCD Function which can be helpful while calculating Average Ratio. We can employ this function with the AVERAGE Function to find the value we want. The GCD Function returns the greatest common divisor for several integer values. As we know, the greatest common divisor is the largest integer value which divides both the numbers without a remainder.

Where, GCD Function is applied between the values in cells C5 and D5 to find out the greatest common divisor.

Where, values in cells C5 and D5 are divided with the greatest common divisor and presented them as a ratio, to do so I’ve concatenated the values and used a colon (:) symbol.

You can see that our result in a conventional ratio format.

Where, Average Function is applied in the cells C5:C9. 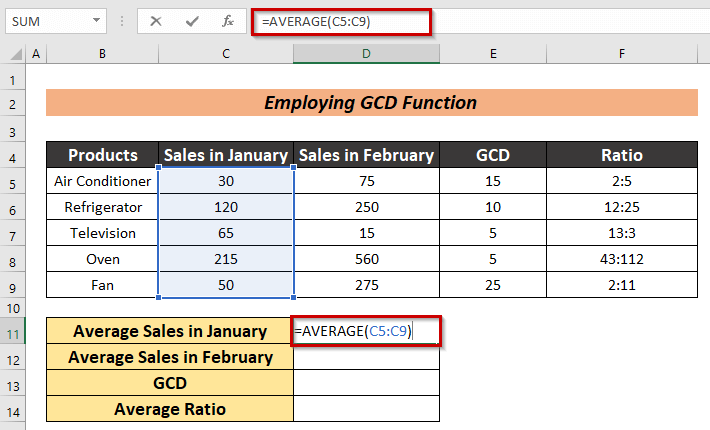 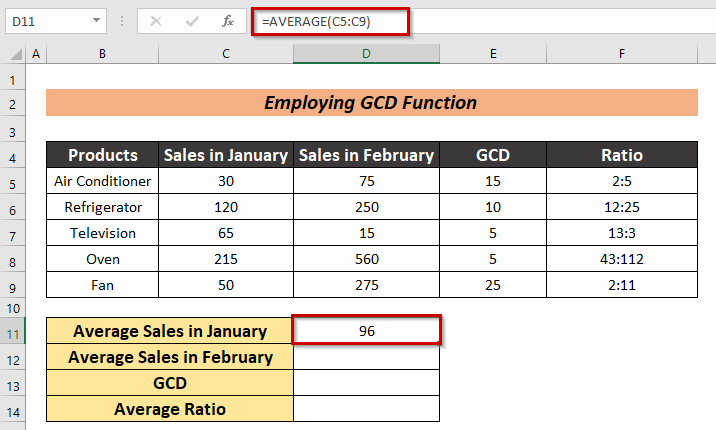 Here, Average Function is applied in the cells D5:D9. 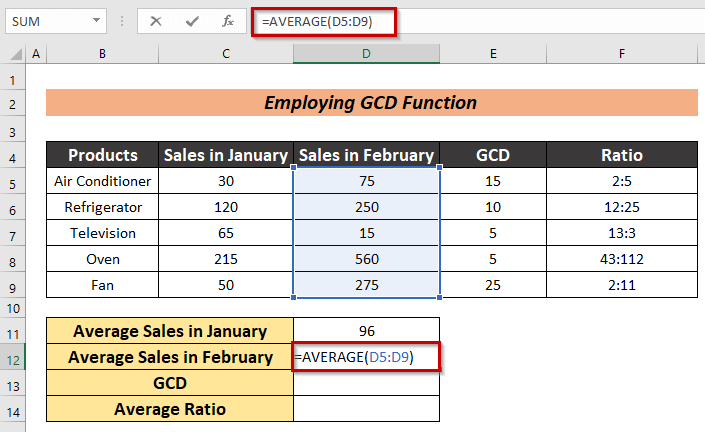 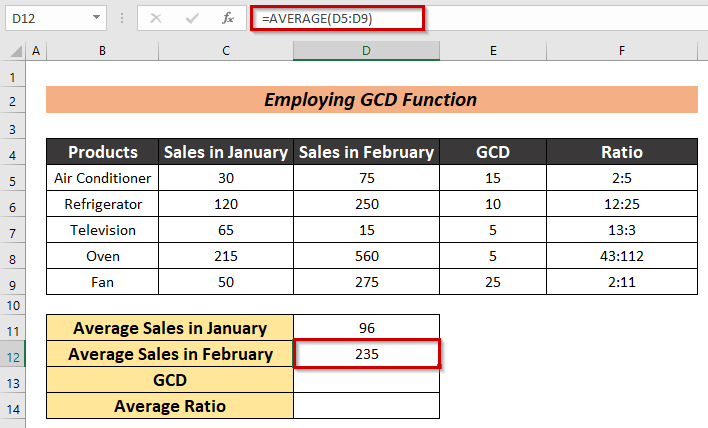 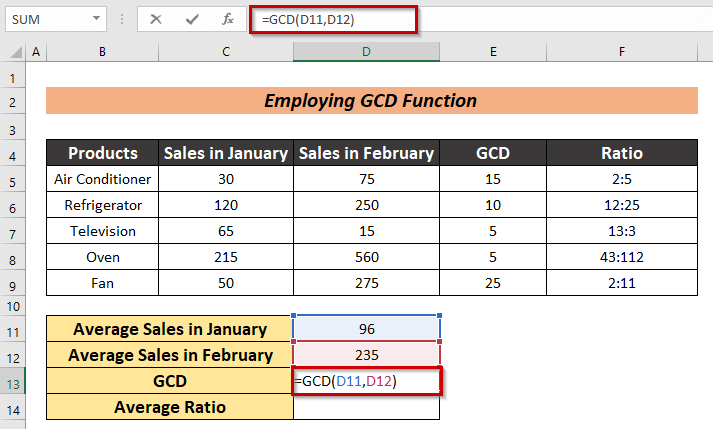 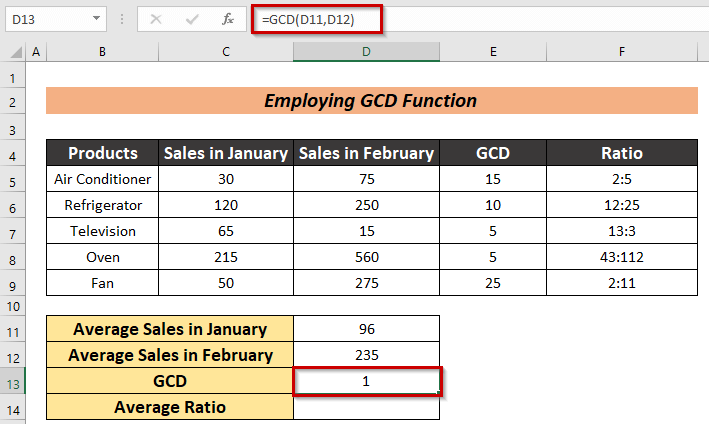 Where, values in cell D11 and D12 is divided with the greatest common divisor and presented them as the Average Ratio. 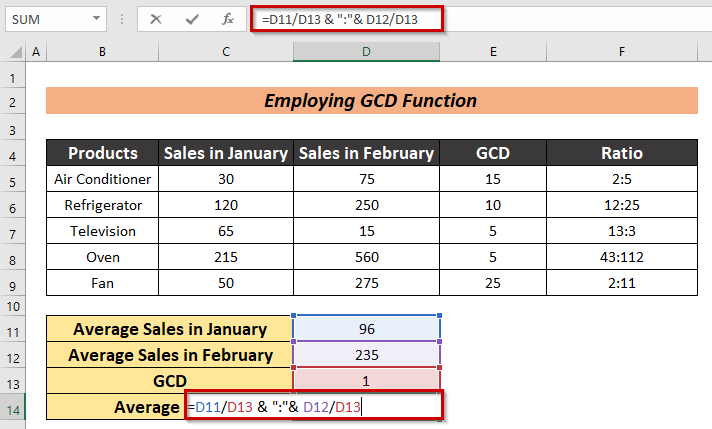 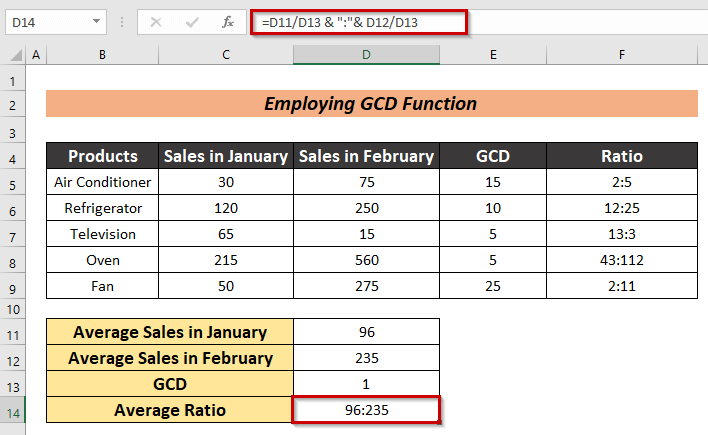 You may wonder why we didn’t apply the AVERAGE function to the calculated Ratio column, once we have concatenated the values it becomes a text, so mathematical formulas will not be applied for that.

Read More: How to Calculate Ratio of 3 Numbers in Excel (3 Quick Methods)

2. Applying Combined Formula of ISNUMBER, IF and AVERAGE Functions

We can use a combined formula of ISNUMBER, IF and AVERAGE to calculate Average Ratio. The ISNUMBER Function checks if the cell contains any number or not. The IF Function verifies if the value in the cell satisfies the condition or not. The AVERAGE Function returns the average of the arguments.

Where, I verified the number with ISNUMBER Function in C5:C9 & D5:D9 cells. Then, the IF Function checks whether it satisfies the condition or not. Then, the AVERAGE Function is applied to calculate the Average Ratio. 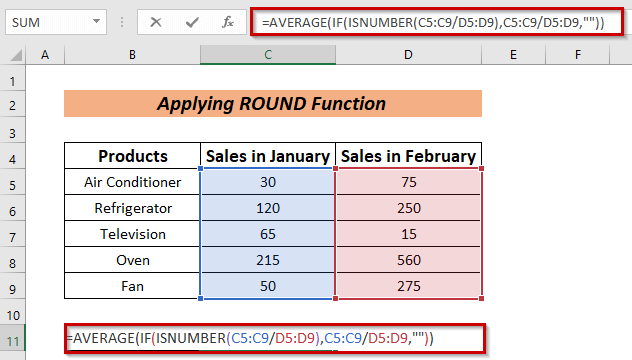 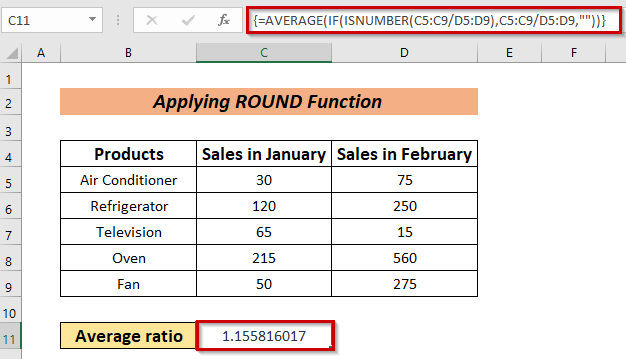 Read More: How to Calculate Ratio Between Two Numbers in Excel (5 Ways)

For more expertise, you can practice here. 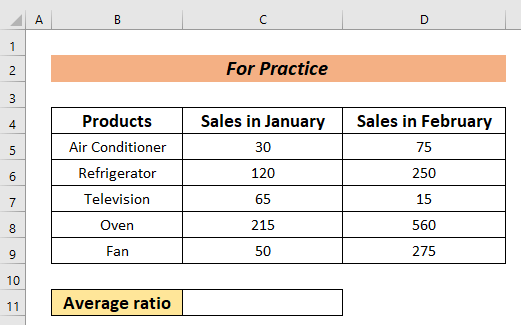 We have tried to explain how to calculate Average Ratio in Excel in 2 simple ways. We hope it will help the Excel Users. For further queries, comment below.

Hello, I am Arif. I am an Engineer who graduated from BUET. I want to pursue an enterprising career in a progressive environment where my skills & knowledge can be enhanced to their maximum potential to contribute to the overall success and growth of the organization.