How to Round up Decimals in Excel (4 Simple Ways)

Microsoft Excel has provided a number of very easy, quick & useful methods to round up the decimals to a particular point or limit. In this article, I’ll illustrate how you can use those simple techniques to round up decimals within seconds.

You can download the Practice Workbook we’ve used to prepare this article. You can change the data to see the results with rounded-up values. Or even you can embed the formulas to find out results with random data given in the spreadsheets.

4 Quick & Simple Methods to Round up Decimals in Excel

In our dataset, we have 4 different numbers with decimals & we want to round up the decimals to a particular point.

1. Customizing Number Format to Round up Decimals

Related: Excel Round to 2 Decimal Places (with Calculator)

To customize this number format we have to do the following steps.

➤ Select the number or a range of cells containing numbers.

➤ Under the Home & from the Number group of commands, select the Expansion flag.

➤ Type the decimal places you want & the sample result will be shown on the top of it. 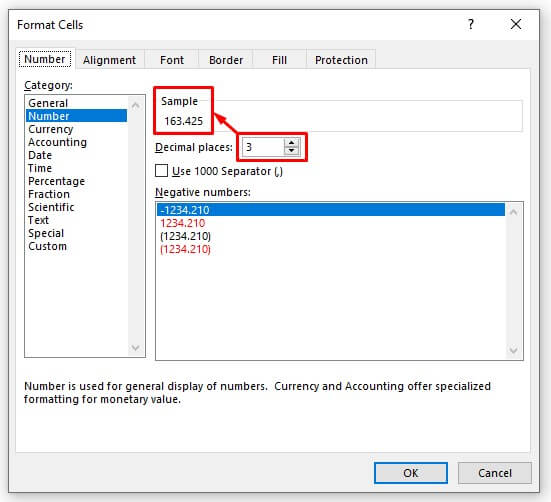 2. Using Math & Trig Drop-down to Round up an Array of Decimals

We can select the ROUNDUP function from the Formulas tab & it’ll let you choose an array or a large range of cells with more precision.

➤ Go to the Formulas ribbon first. 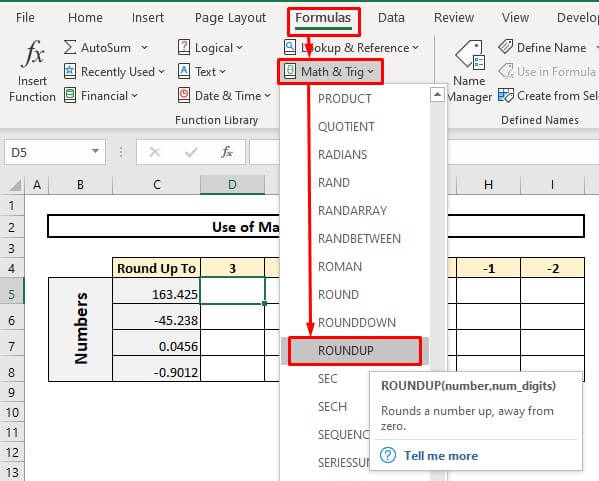 ➤ Now select the cells of numbers that you want to round up.

➤ Type 3 or some other value inside the num_digit section. You’ll find a preview of the resultant value at the right bottom of the arguments. 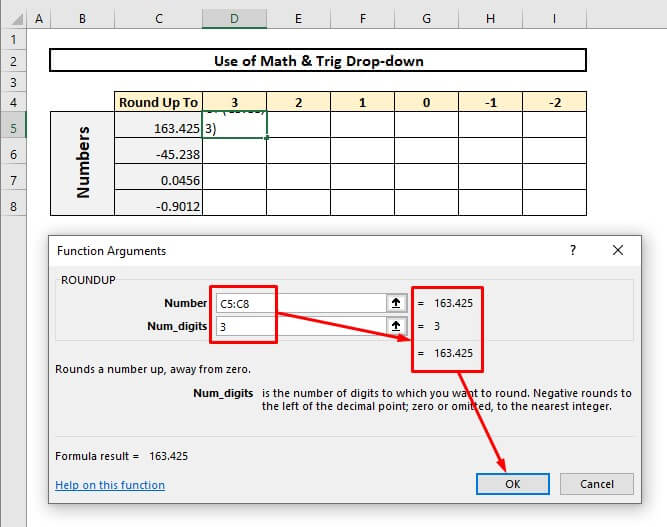 Here I’ve shown results for all the numbers rounded up to fixed decimal places in the picture below.

3. Using ROUNDUP Function to Round up Decimals

We can use the ROUNDUP function directly in Excel to round up decimals or numbers. The syntax for this method will be –

In the arguments section,

Numbers – Number that we want to round up.

num_digits – Decimal point or number place that we want to round up to.

If you want to get integers only then you have to use 0 or negative values in the num_digit argument.

Note: We can also use the ROUND function here but this function will either round up or round down the number based on the following decimal digit. So this function is not recommended if you want to round up only.

4. Inserting Ceiling Function to Round up to Specified Multiple of Numbers & Decimals

The syntax of this function is-

In the arguments section,

number– The number you want to round up

significance– It’s the number or decimal value that will be multiplied by the integers automatically to round up your number to the next multiple of that value inputted by you. 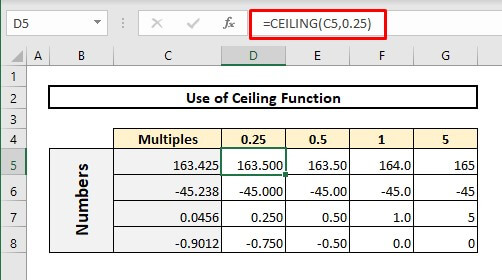 These are all the most common & fruitful methods to round up decimals or numbers under different criteria. If you think I’ve missed a formula or technique that I should’ve added too, then let me know through your valuable comments. Or you can take a look at our other interesting & informative articles related to Excel functions on this website.

How to Average Values Greater Than Zero in Excel (4 Ways)

How to Apply COUNTIF Function in Excel with Multiple Criteria