In this article, we will discuss an important topic which is how “Excel reference cell in another sheet dynamically”.

Here we will refer to a spreadsheet cell in another spreadsheet. We will also do the referencing in other workbooks.

The referencing will be done by using the INDIRECT function. So, we need to know about this function first.

Cell– It is an optional argument. You can indicate it directly like, A1, B1, etc., or in the form of R1C1. It is used as Boolean input and by default, A1 is taken as True.

Some examples of INDIRECT Function (Get clear idea)

Let us look at some of the examples in the picture below. In the image below, column E is holding the formulas from column D.

How to Reference a Cell in Another Excel Worksheet Dynamically

Let`s create a workbook named Book1. In this workbook create 3 different worksheets named as Sheet1, Sheet2, Sheet3. In Sheet1 type 1-10 serially in the range A1:A10. In Sheet3 type 10-19 in the range A1:A10. We will do the worksheet referencing in Sheet2. So initially nothing is inserted in this sheet. After you provide the input in Sheet1 and Sheet3, do the following in Sheet2 to see the magic.

The INDIRECT function first gets the reference from A2, where Sheet1 is written. Just before indicating A2, we used a set of double quotes. These quotes indicate the text string. As Sheet1 is written in cell A2 so, the function will take Sheet1 as the reference. “&” is used to combine the arguments together. “!” sign is used to separate sheets from a cell. So, by using “!” with “” we are actually referring Sheet1. Here a single quote is placed in between the double quotes for preventing errors (when the worksheet name has space in it). At the end of the Formula B2 is written which indicates the address of the cell.

which is written in cell C8 will return number 15 because we are referring to A7 which contains the name Sheet3 and in B5, A6 is written.

Note: If any of the cells contain no values. The formula gives an error result. To prevent this, you can use the below formula:

To insert data in Sheet4 from Spreadsheet1 of Book2 you can do the things below.

How you can reference a separate workbook dynamically

The previous process was for direct referencing. For the dynamic referencing follow the below processes. 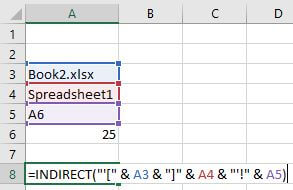 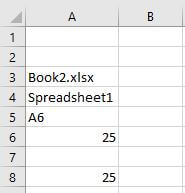 Here, the formula uses square brackets which are used for structured referencing. Here we refer to the workbook with the square brackets. After that, the referencing of worksheet and cell is the same as before.

Hope you find this article useful. Give us your feedback and stay tuned.

How to Use COUNTIF Between Two Numbers (4 Methods)

How to Calculate Interest on a Loan in Excel (5 Methods)