How to Use LOOKUP Function in Excel (4 Suitable Examples)

There are a lot of functions in Excel that you can use to lookup for a value from a dataset. The LOOKUP function is one of them. The LOOKUP Function is categorized under Excel Lookup and Reference functions. If your problem is to find data from a range, this method will work at ease. In this tutorial, you will learn to use the LOOKUP function in Excel with suitable examples and proper illustrations. 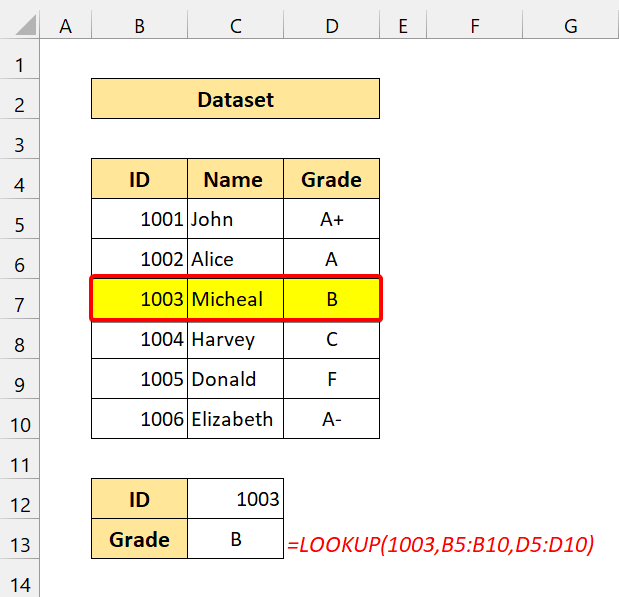 The above screenshot is an overview of the article which represents a simplified application of the LOOKUP function in Excel. You’ll learn more about the dataset as well as the methods and functions under different criteria in the following sections of this article.

Introduction to the LOOKUP Function

The LOOKUP function looks up a value in the one-row or one-column range.

The LOOKUP function is available in 2 formats. The Vector form and the Array form.

Important Note to Remember: The values in lookup_vector must be put in ascending order: …, -2, -1, 0, 1, 2, …, A-Z, FALSE, TRUE; otherwise, LOOKUP might not return the accurate value. Uppercase and lowercase text are identical.
[/wpsm_box]

In both formats, the LOOKUP function returns the output for the look-up value.

2 Ways to Use the LOOKUP Function in Excel

Now, there are two forms of the LOOKUP function. One is the Vector form and the other one is the Array form. We will discuss them in this section with simple examples. And we will tell you which one to choose. So, stay tuned.

The vector form of the LOOKUP function will explore one row or one column of data for a particular value and then fetch the data from the exact position in another row or column.

You can see this from this example. Our lookup value was 1003. The LOOKUP function first searched for this value. Then, it returns the corresponding result from the same row.

Read More: 7 Types of Lookup You Can Use in Excel

We will recommend you to use HLOOKUP for horizontal lookup and VLOOKUP for vertical lookup instead of the Array form of LOOKUP.

If your array is wider, it will work like the HLOOKUP function. Wider means it has more columns than rows.

Take a look at this simple example.
Formula for Vertical Array: 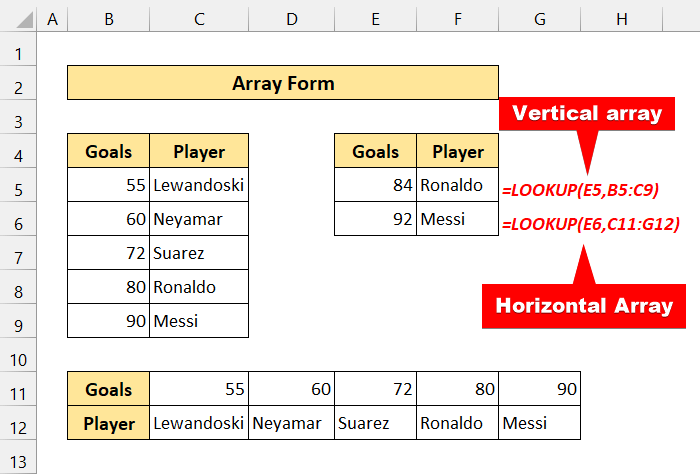 Here, we have the same dataset. We placed the array differently. The first one is the vertical format and the second one is the horizontal format.

In the following sections, we will provide you with five examples. I hope it will clear your idea about the LOOKUP function in Excel. If you have already read previous sections, these examples will be easier to understand. I hope you will learn all of these and apply this knowledge to your worksheet.

Now, you can find the last non-empty cell from an entire column using the LOOKUP function in Excel. I think this formula will come in handy in a lot of situations. 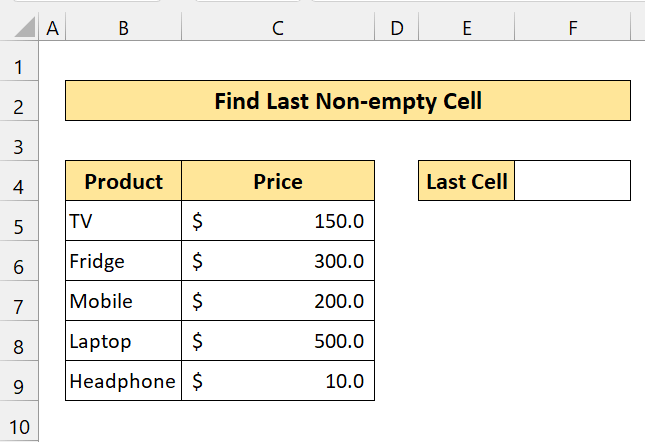 Here, we have a simple dataset. Now type the following formula in Cell F4:

As you can see, by using the LOOKUP function of Excel, we can easily find the last non-empty cell.

2. The LOOKUP Function to Find Latest Value in Excel

Sometimes, your dataset may contain the same data but with different values. It might be a date, price, age, etc. From a large dataset, you may want to find the latest data. In this case, you can use the LOOKUP function to get the latest entry. 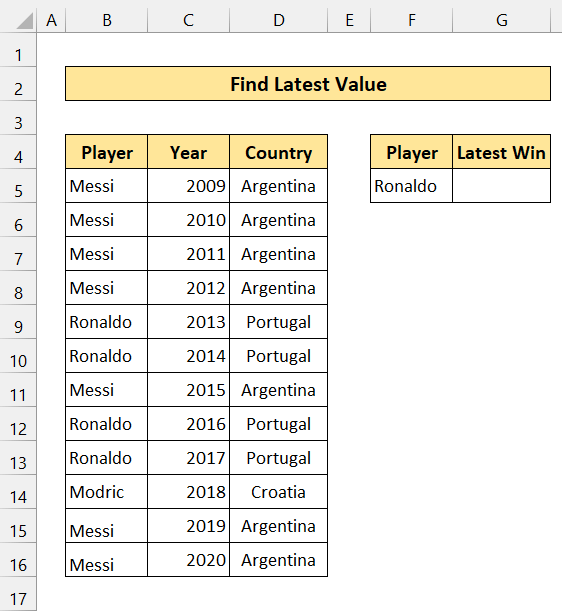 This is a dataset of Ballon d’Or from the year 2009 to 2020. Our goal is to find the latest value for Ronaldo. Or you can say when was the last time Ronaldo won the Ballon d’Or. 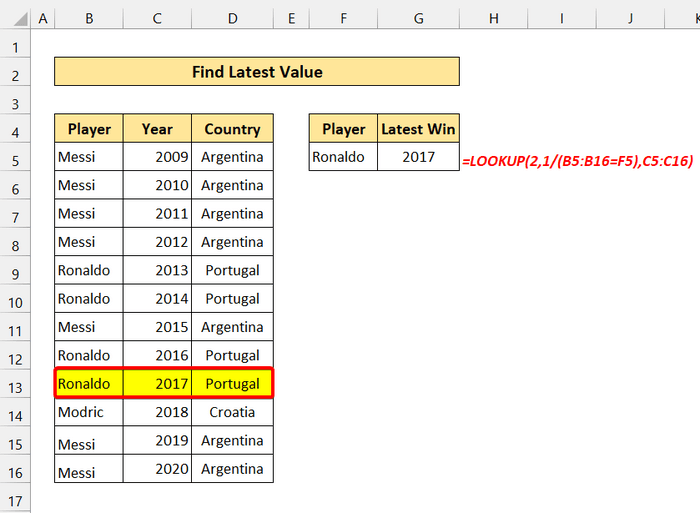 As you can see, we have successfully found the latest value using the LOOKUP function in Excel.

3. Find Grades Based on Marks Using the LOOKUP Function

Now, this example is an array example. It will show the vertical alignment. We will find a value based on data that is not present in the dataset. But, our LOOKUP function array form will find the nearest small value. We can use this to see grades. 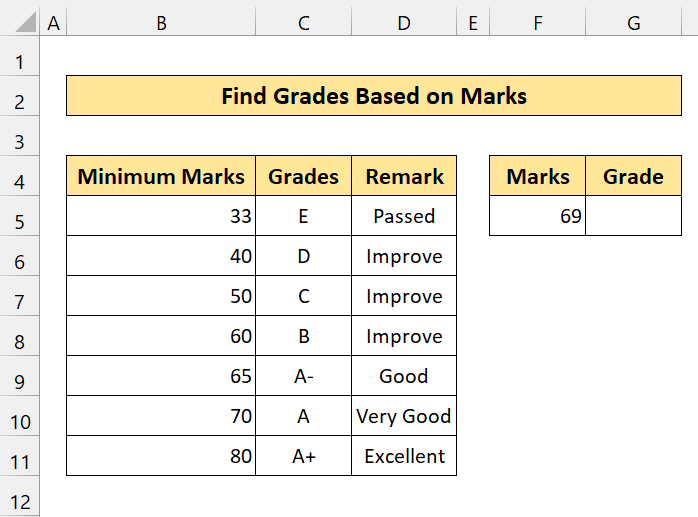 Here, we have some marks and grades. On the right-hand side, we have a mark that is not in the dataset. Our goal is to find the grade based on that mark. 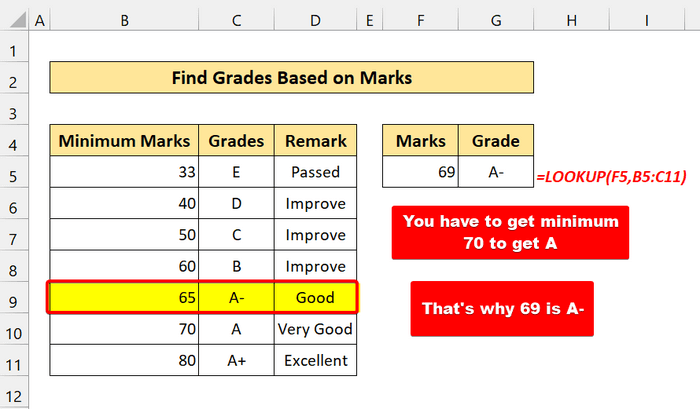 Here, you can see the grade is A- because you have to get 70 to get the grade A. That’s why it chooses the nearest small value A-.

4. The LOOKUP Function Combined with IF to Show a Message If the Lookup Value is Empty 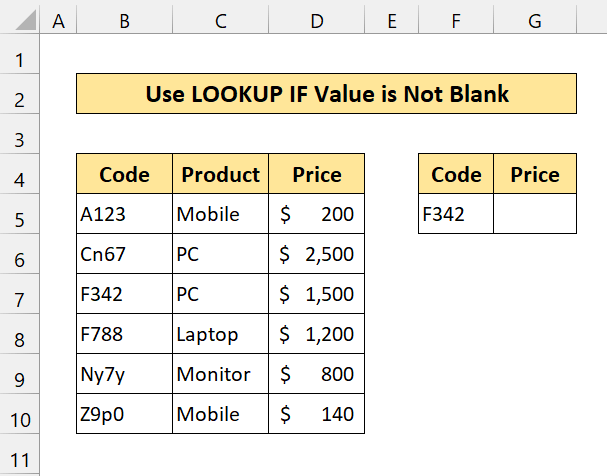 Here, we have some codes for some products and prices. Our goal is to find the price based on the Code. Now, type the following formula in Cell G5: 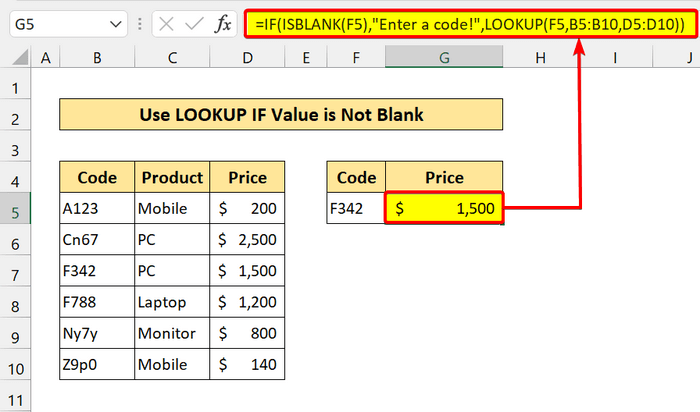 As you can see, we have successfully found the price based on the code using the LOOKUP function.

Now, if you delete the code, it will tell you to enter a code. 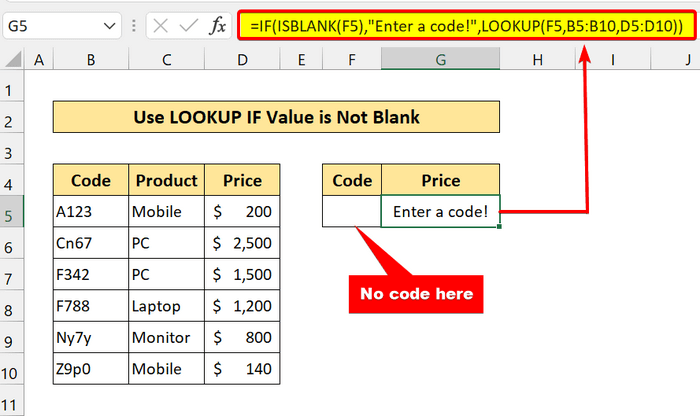 Read More: How to Lookup Value from Another Sheet in Excel (3 Easy Methods)

✎ Your lookup array must be in ascending order.

✎ If an array is square or is taller than it is wide (more rows than columns), LOOKUP searches in the first column.

✎ If the value of lookup_value is less than the smallest value in the first row or column (relying on the array dimensions), LOOKUP returns the #N/A error value.

✎ When your  lookup_value is greater than all values in the range, the LOOKUP function matches the last value.

To conclude, I hope this tutorial has provided you with a piece of useful knowledge to use the LOOKUP function in Excel. We recommend you learn and apply all these instructions to your dataset. Download the practice workbook and try these yourself. Also, feel free to give feedback in the comment section. Your valuable feedback keeps us motivated to create tutorials like this.

Don’t forget to check our website Exceldemy.com for various Excel-related problems and solutions.

Hello! I am Shanto. An Excel & VBA Content Developer. My goal is to provide our readers with great tutorials on various Excel-related problems. I hope our easy but effective tutorials will enrich your knowledge. I have completed my BSc in Computer Science & Engineering from Daffodil International University. Working with data was always my passion. Love to work with data, analyze those, and find patterns. Also, love to research. Always look for challenges to keep me growing.