How to Compare Two Columns or Lists in Excel

While doing different tasks in Excel we often come across a situation where the matching and differences of two or multiple columns are required. It’s not a difficult task to compare two lists in excel but you may get confused as there are so many ways to do it. In this article, we will look for different techniques of matching and differentiating columns in Excel. First of all, we will be using a table of 2 columns containing different colors’ names. 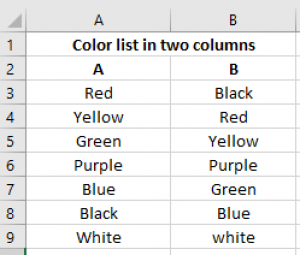 Using conditional formatting is a way of finding the differences between two columns in Excel. The procedure is given below. 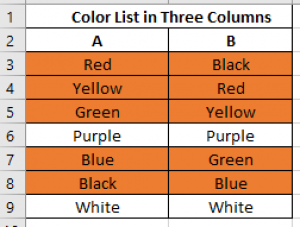 IF function plays a significant role in finding both differences and matches in excel. Here we will be using it to find the matches in two columns. 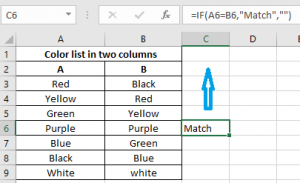 Again, conditional formatting can be used for finding the matches between two columns in Excel. The procedure is given below.

Click on the image to get a full view. 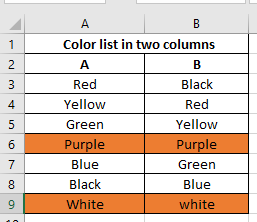 Excel formula to compare two columns and return a value

1) Using IF function for determining differences in two columns 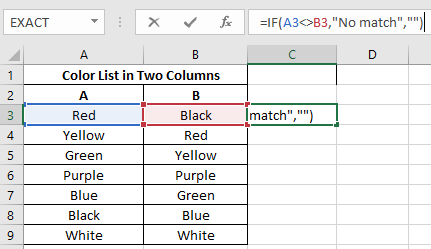 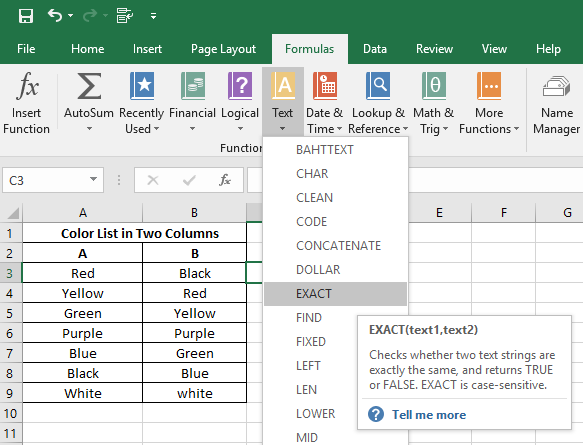 Note that this function is case-sensitive. If it was not case sensitive we would have got True in C9.

3) Compare two tables in Excel using VLOOKUP and IF

If you are having 2 tables of different and exact data in their column and we need to find the matches and differences you can use a formula
=IF(VLOOKUP(Value, Table-Reference, Index-number, False)=Value,”Match”, “Do Not Match”).

How to Compare Two Columns in Excel Using VLOOKUP

in a different empty column (here we used C3). By dragging the cell downwards where the formula is applied we can find the matching and differences between the two columns.

How to compare two columns in different excel sheets

Most of us don’t know that it is possible to compare data from 2 different worksheets/spreadsheets. By using conditional formatting, it can be easily done. For that, we have to use a formula of =A3<>Sheet2!A3.

Just like finding the differences between two worksheets/spreadsheets, you can also find the matches in the same manner. Only the formula will be changed. Here we will be using the formula
=(A3=Sheet2!A3) to find out the matches.

Here we will deal with 3 columns.

1) Using AND or COUNTIF function for finding matches

For highlighting rows that have same/identical variables in every column you can create conditional formatting rules based on the formula =AND($A3=$B3, $A3=$C3) or =COUNTIF($A3:$C3, $A3)=3 ,where the comparing column number is 3 and the cells A2, B2, and C2 are the top cells.

Click on the image to get a full view 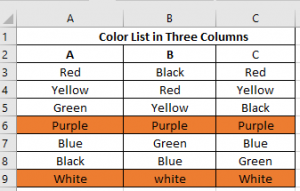 2) Using IF and AND functions for finding differences

Just like 2 columns finding differences in multiple columns is also easy. The procedure is given below.

While doing different data analysis we face difficulties in finding differences and matches in columns in Excel. As you can see there are a lot of ways in Excel to find them. Based on the task you are doing you can use any of these. This Blog may help you to overcome the problems that you face while working on multiple columns.

Attendance Sheet with Salary in Excel Format (with Easy Steps)

How to Calculate Simple Interest Loan Payments in Excel (5 Methods)