How to Create a Two Variable Data Table in Excel

This article is part of my series: What-If Analysis in Excel – A Step by Step Complete Guide.

On the other hand, in a one-variable data table, you can place any number of formulas, or references to formulas, across the top row of the table. In a two-variable table, this top row holds the values for the second input cell. The upper-left cell of the table contains a reference to the single result formula.

The setup of a two-variable data table. 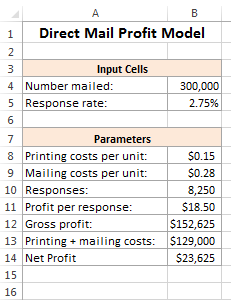 This worksheet calculates the net profit from a direct-mail promotion of a company.

This data table model uses two input cells: the number of mail sent and the expected response rate. The following items appear in the Parameters area:

If you enter values for the two input cells, you will see that the net profit varies quite a bit, often going negative to produce a net loss.

The following figure shows the setup of a two-variable data table that summarizes the net profit at various combinations of mail numbers and response rates. The table locates in the range E4: M14. Cell E4 contains a formula that references the Net profit cell: B14.

To create the data table, follow the following steps:

The following figure shows the final result. From this table, you can find out that a few of the combinations of response rate and quantity mailed result in a profit rather than a loss.

The final result of the two-input data table [Click on the image to enlarge].

Same as the one-variable data table, this data table is also dynamic. You can change the formula in cell E4 to refer to another cell (such as gross profit). Or you can enter some different values for Response Rate and Number Mailed.

How to Find Correlation between Two Variables in Excel

Scenario Analysis in Excel: A Guide with 2 Sample Cases + Template