How to Remove Symbol in Excel (8 Ways)

There could be so many unwanted symbols and characters existing in excel cells, maybe from a typing mistake, or a symbol that was needed initially and you don’t need anymore. Excel provides some excellent tools to remove them from a spreadsheet. This article will focus on these different methods and tools to remove symbol in Excel.

You can download the workbook which I have used for demonstrating the article with all the datasets from the download box below.

8 Ways to Remove Symbol in Excel

This maybe is the fastest and easiest way to remove symbol from a group of Excel cells. The downside is you have to remove each symbol one by one. Nevertheless, It is a very sound method when you have the same repeating symbol every time in a group of cells.

For this method, I have used the dataset below. 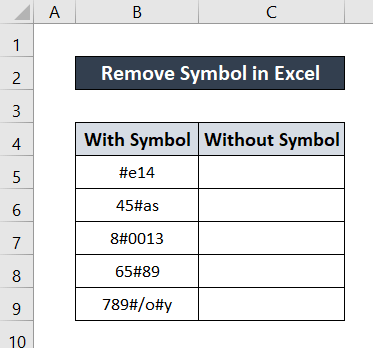 From this dataset, I will be removing the ‘#’ symbol with Find and Replace. 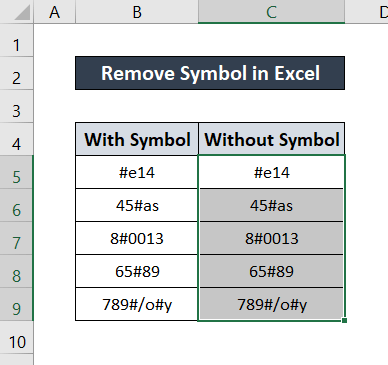 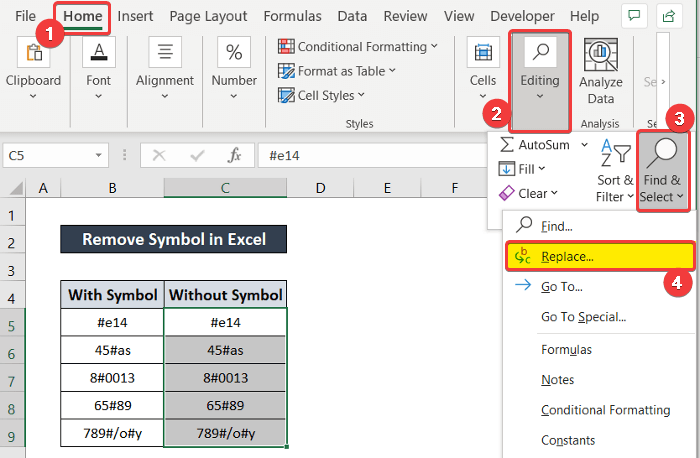 You will now have the ‘#’ symbol removed from all the selected cells. 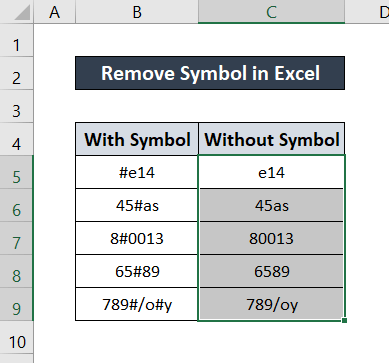 Note: If you want to further remove symbols, repeat the same process for different ones.

Read More: How to Remove Plus Sign in Excel (2 Easy Techniques)

If using function is your thing, this method might be the right one for you. You can achieve the very same result from above, from the same dataset, by using the SUBSTITUTE function.

I will be using the same dataset from the previous method to demonstrate this method and will be removing the ‘#’ sign from the cells. 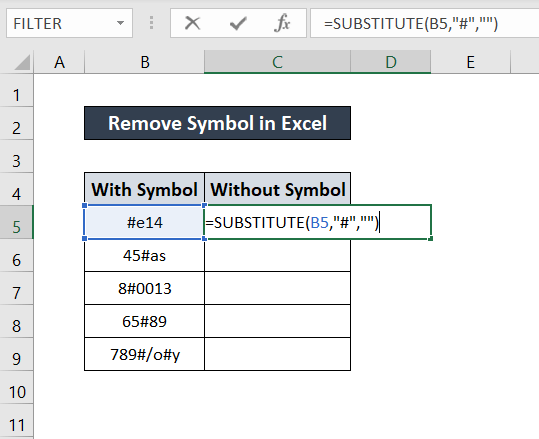 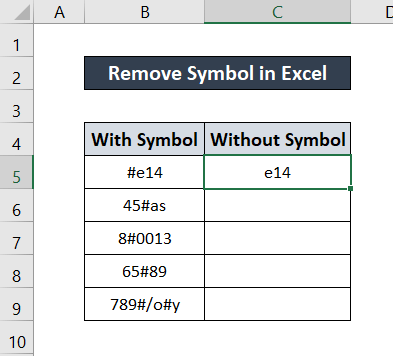 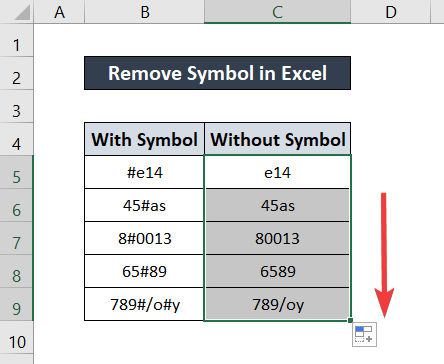 You will have your complete data filled with the symbol removed. 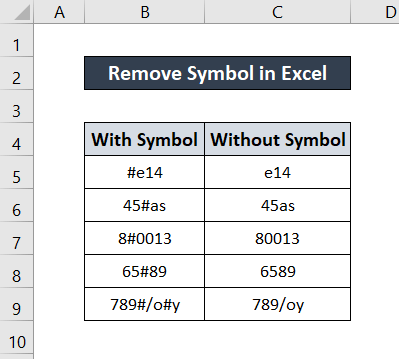 This method is suitable for removing multiple symbols using functions. In this method, I will show you how to use nested loops to do that. 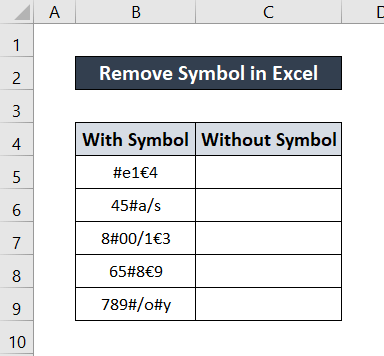 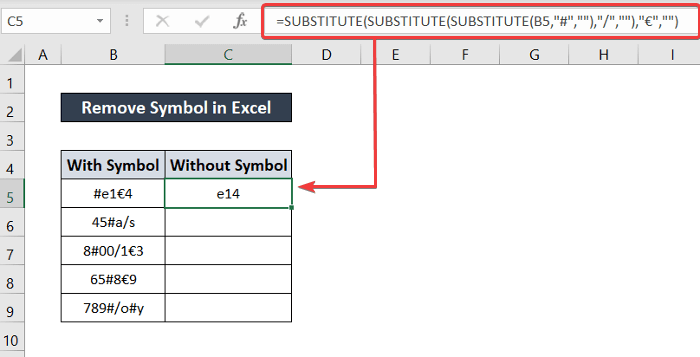 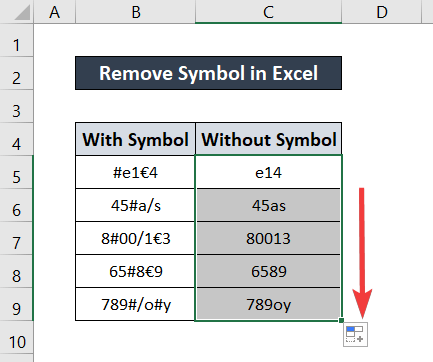 Instead of the previous one, you can also use a combination of the CODE, CHAR, and SUBSTITUTE functions to remove the symbol from a reference cell. This method comes in handy for the symbols you can’t type in and you don’t know the code values of.

The CODE function is used to find out the ASCII value of a character or the first character of a text. The CHAR function is helpful to write the special characters in Excel. The combination of these two will help the SUBSTITUTE function to put in the argument of replaceable symbol in the string.

For a demonstration of this method, I will be using the following dataset. I will be removing the © symbol from these cells. 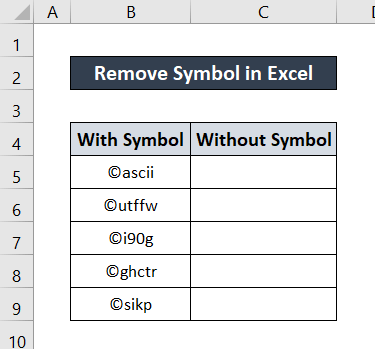 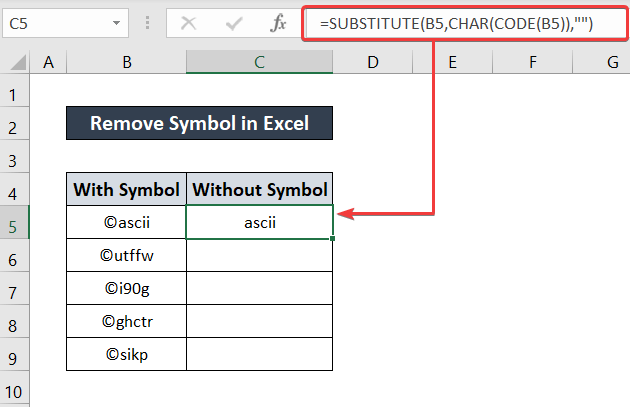 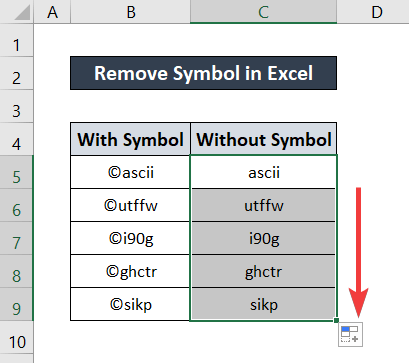 👉 CODE(B5) returns the ASCII number of the first value of cell B5.

👉 CHAR(CODE(B5)) returns the symbol that we are targeting to remove, ©.

👉 SUBSTITUTE(B5, CHAR(CODE(B5)),””) removes the symbol from the text, replacing © with an empty string.

You can remove symbols from a group of cells using the Flash Fill feature of Excel. This is a very user-friendly and fast method. But, this method can only be applied if all of the cells in the range have the same pattern for every symbol.

To demonstrate this method, I will be using the following dataset with the same pattern of symbols. 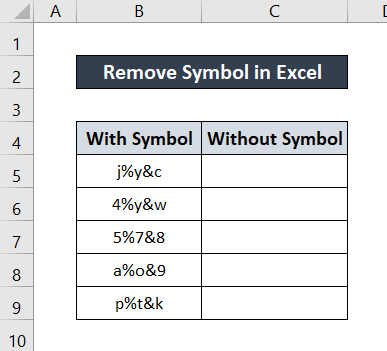 To use the Flash Fill feature easily, follow these simple steps. 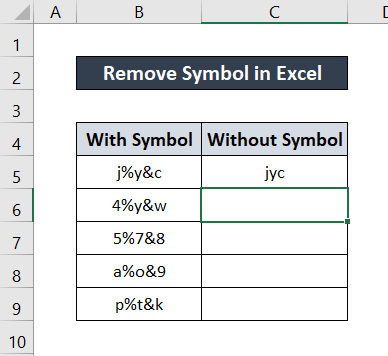 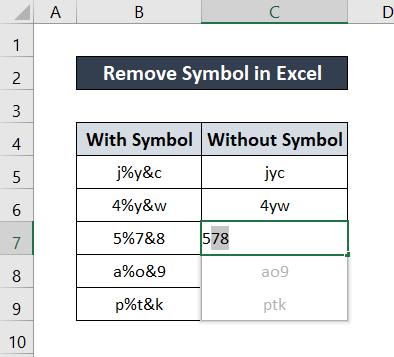 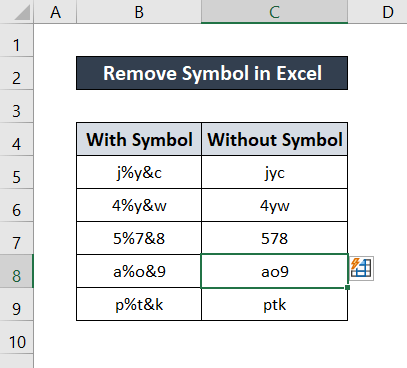 You will have all the cells filled up by the Flash Fill feature.

Read More: How to Remove Sign from Numbers in Excel (6 Suitable Methods)

This method can only be used if you have Microsoft Office 365. Excel 365 enables you to create your custom function to reuse it later on. I will be using a combination of the LAMBDA, IF, SUBSTITUTE, LEFT, RIGHT, and LEN functions to create the reusable function.

The LAMBDA function can take multiple arguments, the last one being the calculation of the parameters and the previous ones as the parameters. The IF function takes three arguments- a condition, a value to show if the condition is true, and another one if it is false. The SUBSTITUTE function replaces the second argument with the third in the first argument. The LEFT and RIGHT functions pick up some characters from the start or end of a text and the LEN function displays the length of a given text.

To demonstrate, I have picked up the following dataset with the removable symbols in a particular cell. 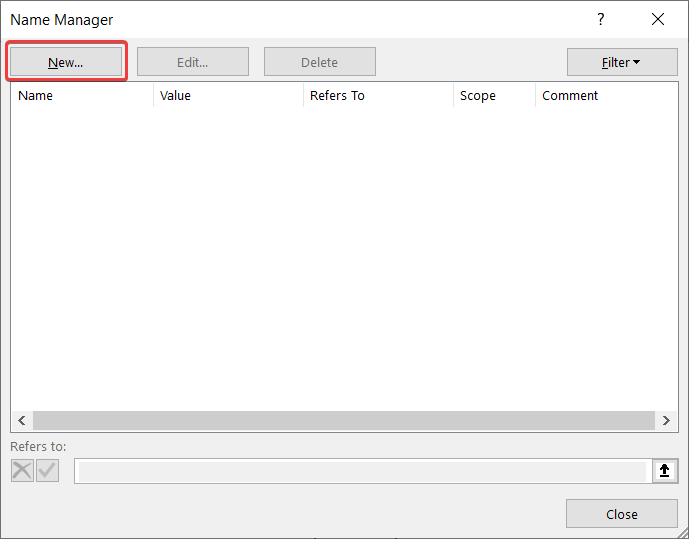 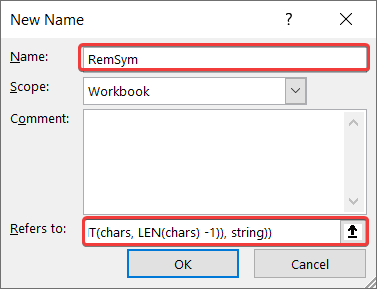 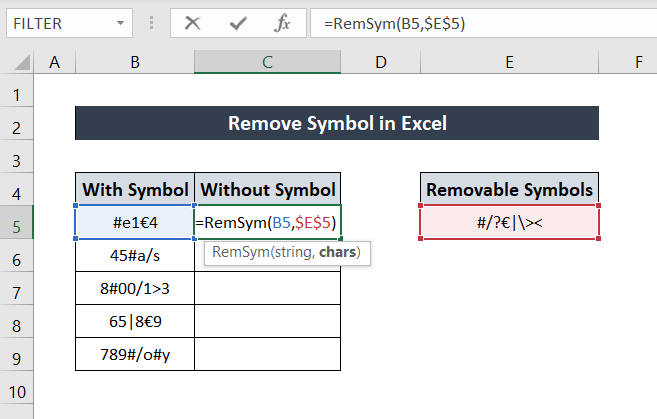 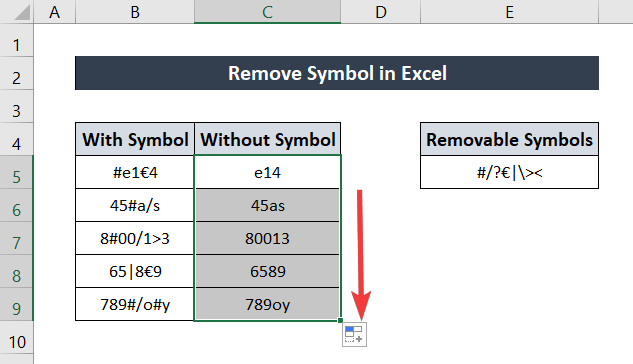 The formula we have used in this LAMBDA function is

Here is a breakdown of it for the first cell.

👉 The LAMBDA function here helps to put in the values of range B5:B9 as string values and cell E5 as symbol values.

If it is all the non-printable symbols you want to remove from a range of cells, the CLEAN function is all you need. This function takes a text and clears all the nonprintable characters from the text. Follow the steps shown below for more detailed instructions.

I have used the following dataset with CHAR(8) in it, which is nonprintable. 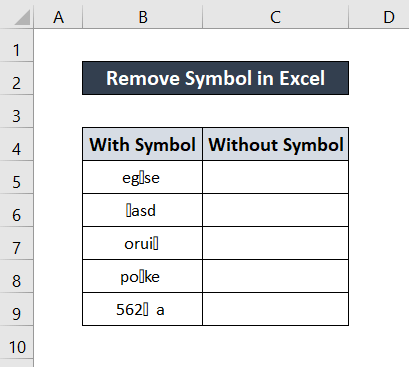 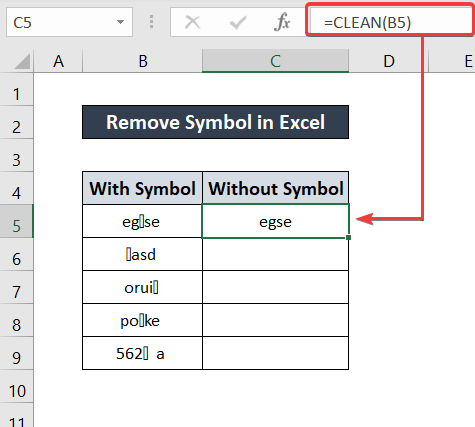 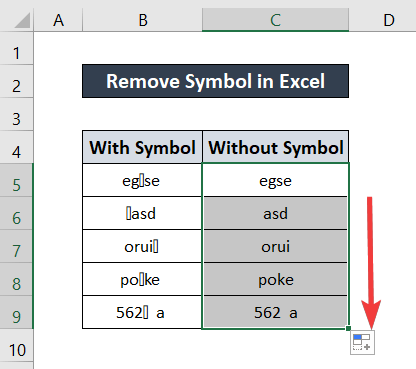 You can also use VBA to create a custom function so that you can remove the symbols from a cell. To do this, you need the Developer tab in the ribbon. Click here to see how to enable the developer tab.

I have used the following dataset for demonstration. 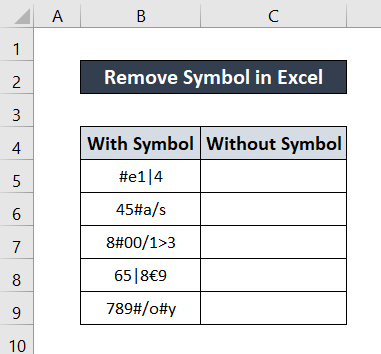 Once you have the tab shown, you can follow the steps below. 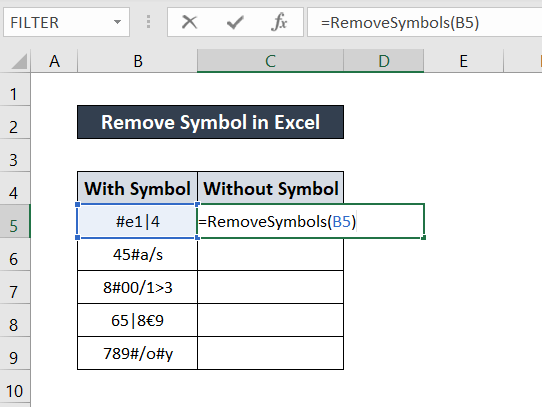 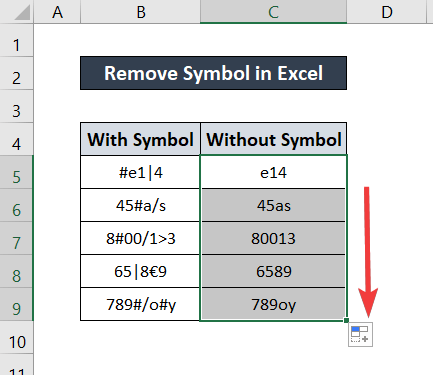 These were the different methods you can use to remove symbol in Excel. Hope you found this guide helpful and it was of use to your context. If you have any suggestions or questions let us know below.

How to Stop Calculating Threads in Excel (4 Handy Methods)

How to Make Excel to Auto Calculate Formulas (4 Simple Methods)

How to Organize Excel Sheets into Folders (2 Effective Ways)