Excel VBA to Translate Language with Formula (With Easy Steps)

Before starting the procedure, you must know the language codes of different languages as you will have to provide language codes in the formula to translate from one language to another. For your convenience, I am providing the lists of some language codes here. You will find the detailed list in the Google Cloud web link.

I have taken the following dataset to explain this article. This dataset contains some Text and their source and target Language Codes. I will translate these Texts from the source language to the target language with a formula using Excel VBA. Let’s explore the step-by-step procedures. 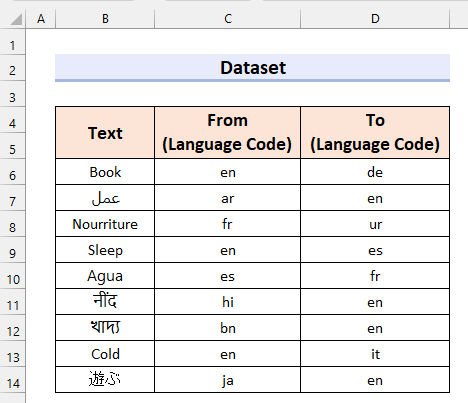 Excel does not provide any function for translation. So, I will make a user-defined function in Excel VBA in this step. 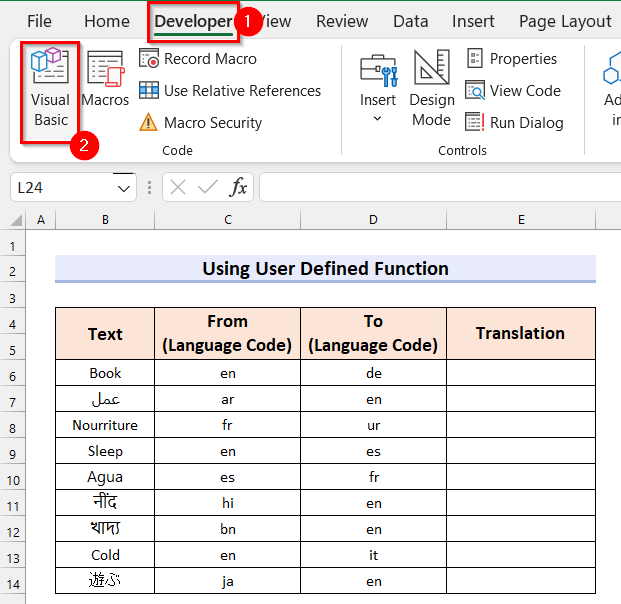 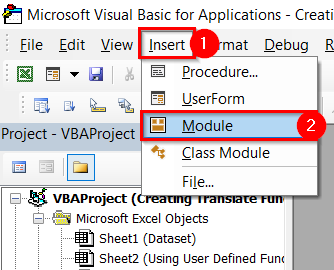 🔎 How Does the Code Work? 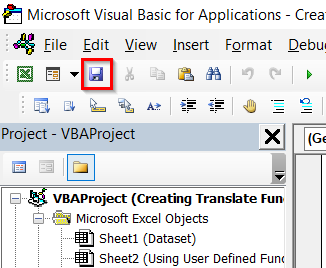 Read More: How to Translate English to Hindi in Excel

Step-02: Use Formula to Translate Language

In this step, I will use the user defined function that I made in the previous step. I will write a formula to translate the language of the given Text. 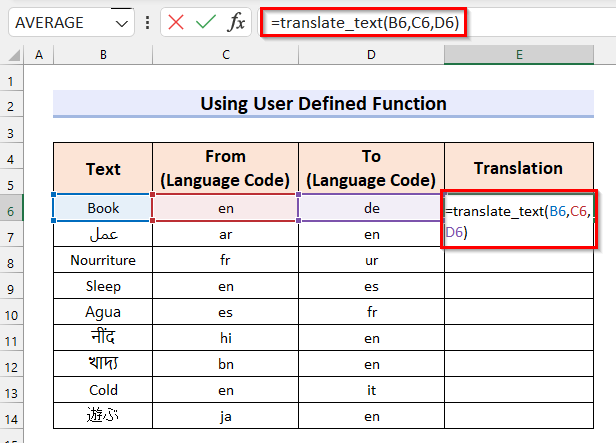 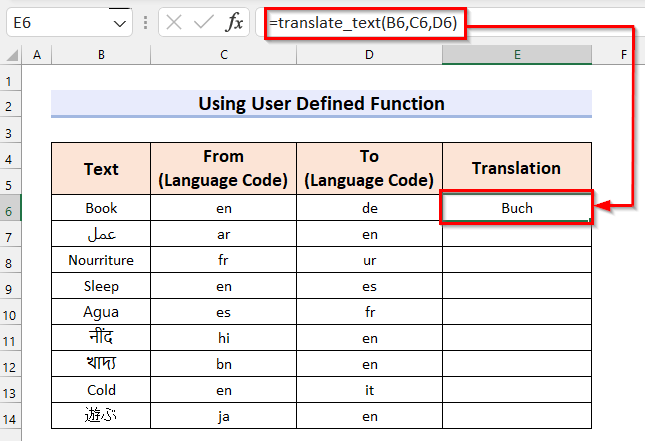 Here, in the translate_text function, I selected cell B6 as text_str, C6 as src_lang, and D6 as trgt_lang. Now, the formula will translate the text in B6 from the language in cell C6 to D6. 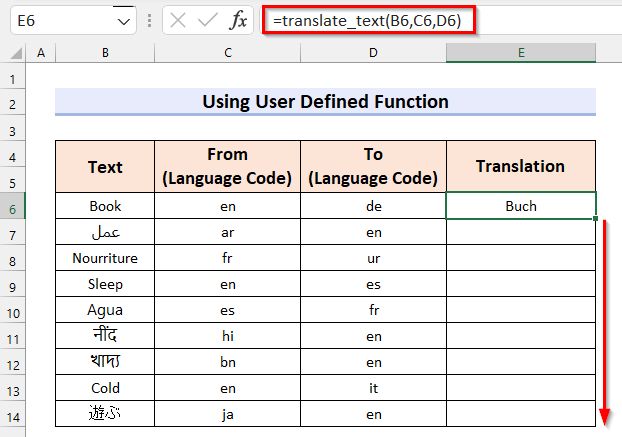 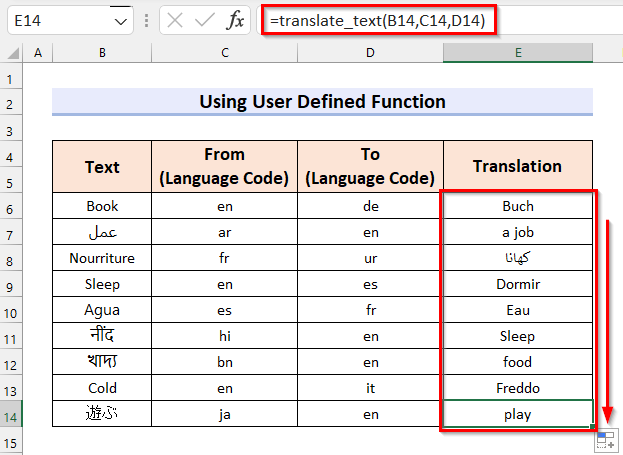 Read More: How to Use Google Translate Formula in Excel (with Easy Steps)

This one is an optional step. Here, I will show you how you can check if the translation you get from the formula is correct. I will use the Translate feature from Excel to do that. 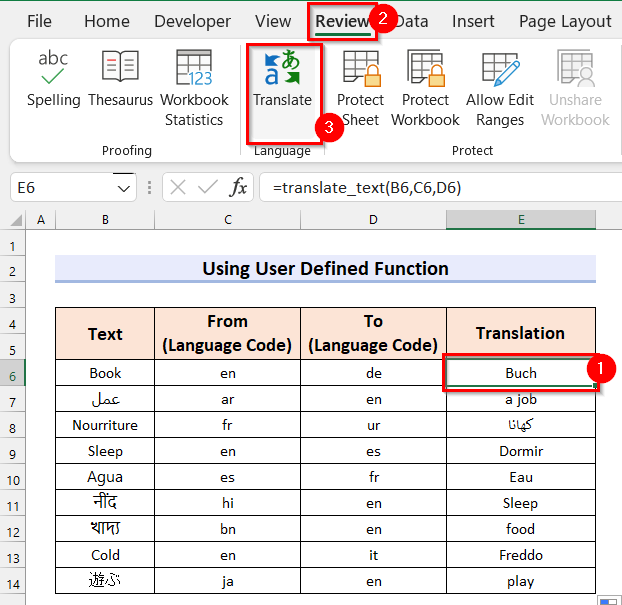 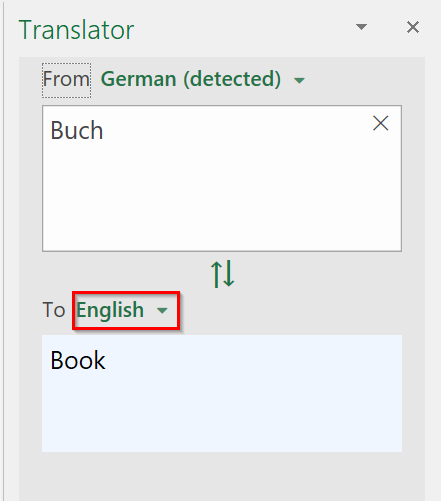 Here, I have provided a practice sheet for you so that you can practice how to use Excel VBA to translate language with formula. 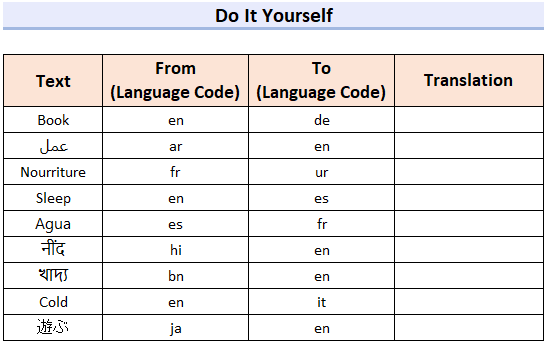 So, you have reached the end of my article. Here, I tried to explain how you can use Excel VBA to translate language with formula in 3 easy steps. I hope this article was helpful to you. For more articles stay connected with ExcelDemy. Lastly, if you have any questions, feel free to let me know in the comment section below.

Hey! Welcome to my profile. Right now, I am doing research on Microsoft Excel. I will be posting articles related to this here. My last educational degree was B.Sc in Industrial and Production Engineering from Bangladesh University of Engineering and Technology. I like to explore new things and find the best and most innovative solutions in every situation.

How to Use VBA Textbox Properties in Excel (with Easy Steps)

How to Hide Textbox Using Excel VBA (with Quick Steps)

Excel VBA: How to Divide Without Remainder (2 Easy Ways)