How to Use VAR Function in Excel (4 Examples)

The Excel VAR function is categorized as a Statistical function of Microsoft Excel. It determines the risk of any investment, hence, is important for financial organizations. In this article, we will discuss the use of the Excel VAR function with examples and proper illustration. 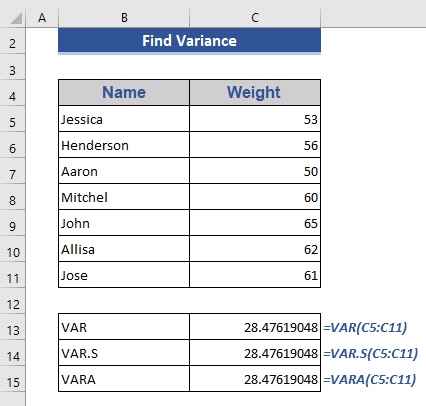 From the above image, you will get a brief idea of getting the variance of a data set.

The VAR function returns the variance of a sample taken from population data.

It returns a numeric value.

This function has been replaced by one or more new Excel functions. Those functions may provide better accuracy. Still, this function is available for the older version’s compatibility. But we should practice using the new functions as well, because this function may not be available in future versions according to support.microsoft.com.

We have multiple VAR functions according to their usages in Microsoft Excel. They are as below:

The VAR function is now modified to VAR.S and used in the latest versions of Microsoft Excel. We can use VAR.S instead of VAR and get the same result.

Variance is the amount of variability of the data set, which indicates how different is spread among values. Mathematically, it is the average of the square values of the difference. The basic formula for calculating variance is as follows:

How to Use the VAR Function in Excel

Now, we will show how to use this Excel VAR function. We have taken data of some students with their height and weight. Now, we will calculate the variance of the height of the students here. 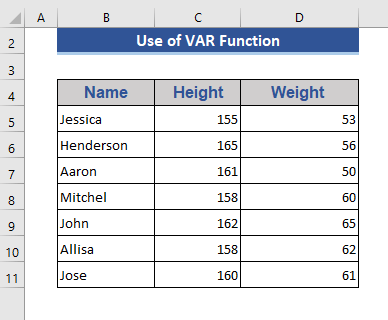 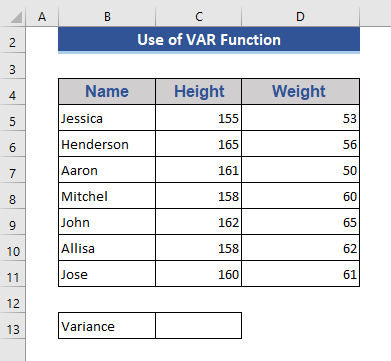 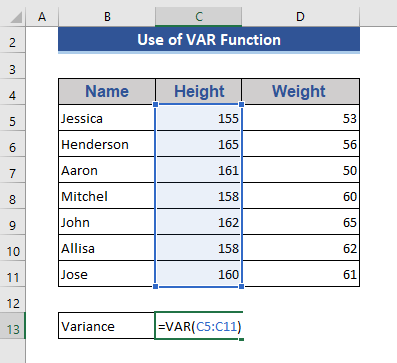 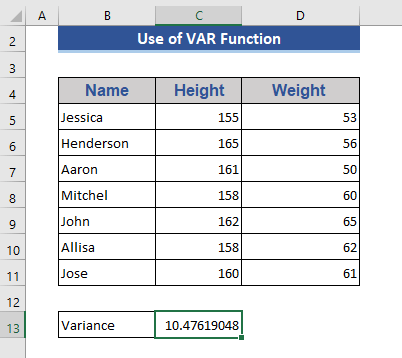 We get the variance here.

Crosscheck the Result from VAR Function with a Manual Procedure:

We can crosscheck and show the calculation manually. 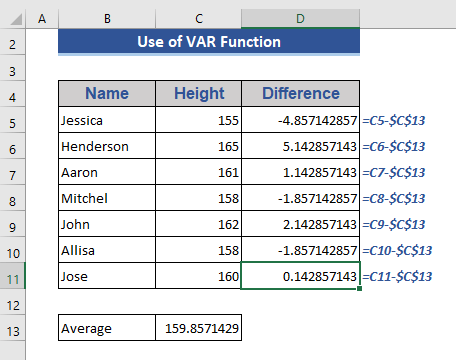 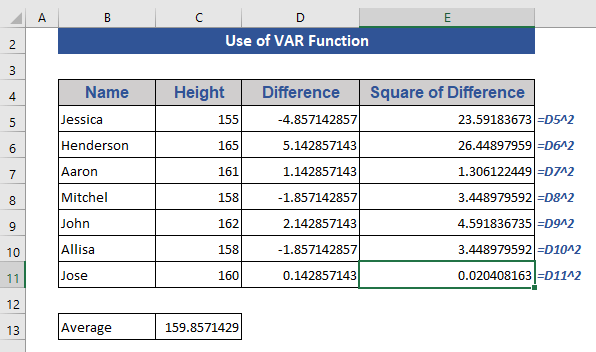 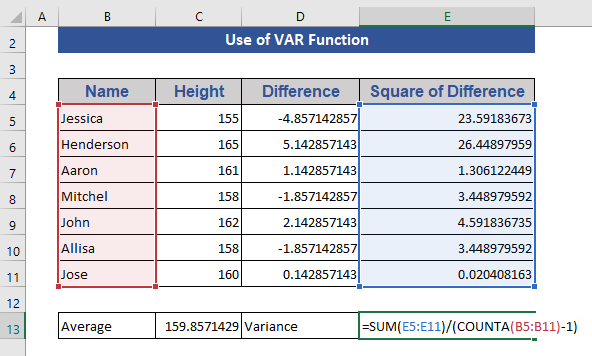 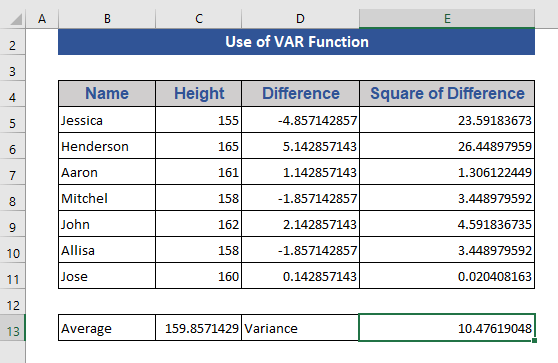 The final output is the same we’ve got using the VAR function first.

We can use the VAR function in different ways. We will show the use of this function with the following examples. Let’s see one by one.

In this example, we will insert individual numbers in the formula. We will consider the below data for this example. 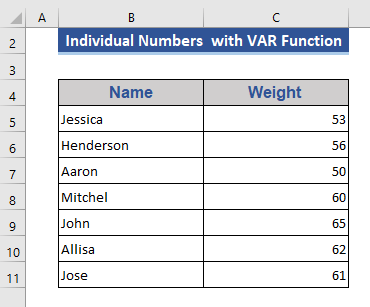 Let’s see the steps below. 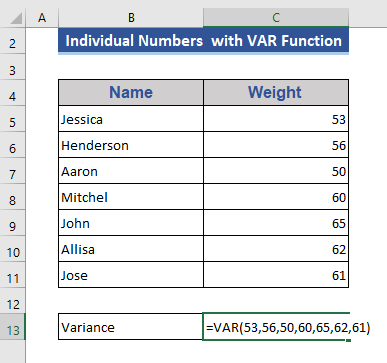 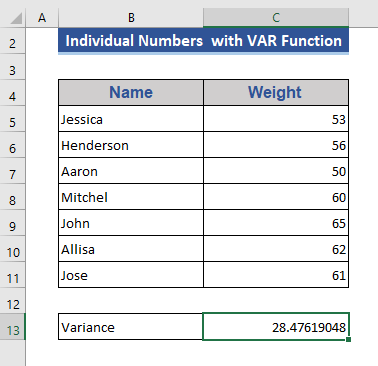 This is the required variance.

2. Get Variance of a Single Range Using VAR Function 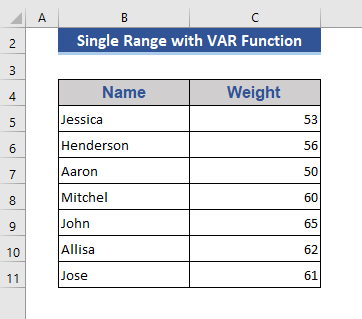 Let’s go through the following steps. 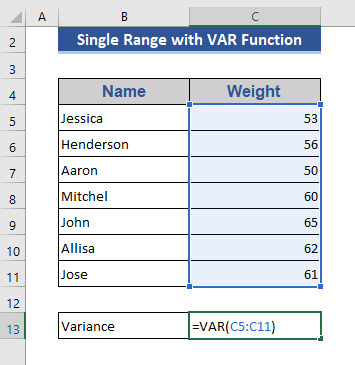 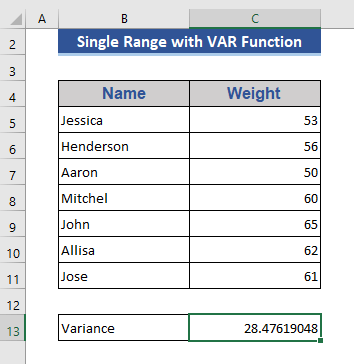 Here, we get the variance of a single range.

This example shows the use of the VAR function with multiple ranges of data. If we need to find variance from different columns, then we will apply this way.

We have taken the below data for this example. 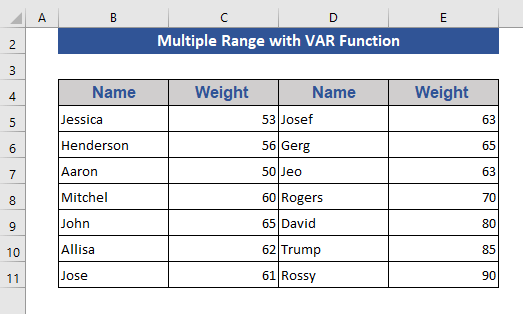 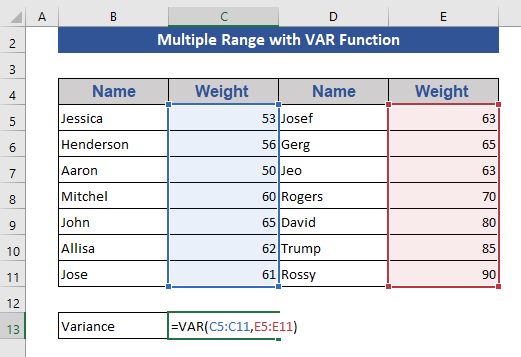 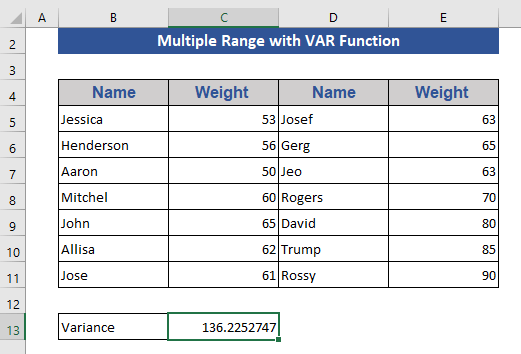 Here, we show when we have multiple ranges of data then how we will apply the VAR function.

We can also use an array of numbers with the VAR function. In this example, we insert an array together with a range. See how we do this in the following manner. 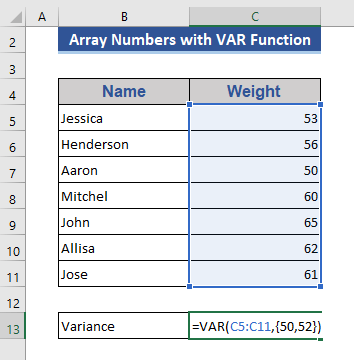 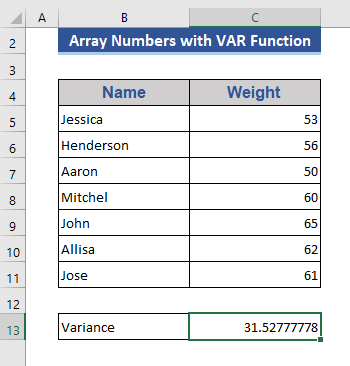 We get the variance using the array of numbers.

Use of Other VAR Functions to Calculate Variance

1. VAR.S Function as a Counterpart of VAR Function

The VAR.S Function does the same operation as the VAR function. The VAR.S function is available in Excel 2010 and later versions.

The arguments of VAR.S are also the same as the VAR function.

We can show that the return of VAR and VAR.S functions are the same from the below image.

We have just typed the following formulas.

Enter the formula in Cell C14- 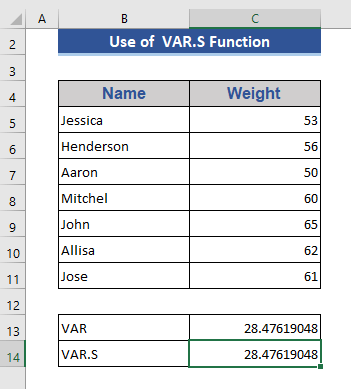 For this example, we’ve taken the following dataset where text value exists. 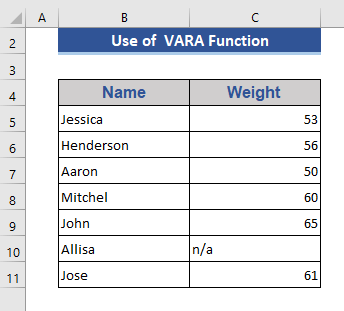 Now, we’ll show the difference between the VARA function with the VAR and VAR.S function.

The formula in Cell C14 will be-

The formula in Cell C15 is- 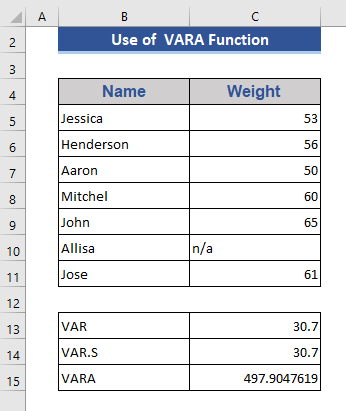 Here, we can see that from VAR and VAR.S, we get the same result. But the VARA returns a different result from them. Because the VARA function counts the text values as 0.

3. Use of VARP and VAR.P to Calculate Population Variance

Now, we will find out the population variance of the below data. 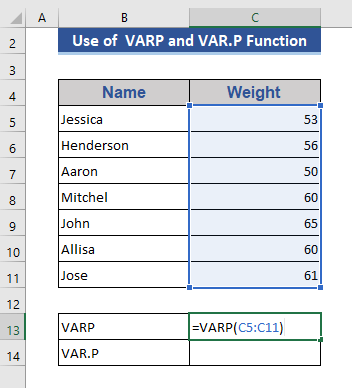 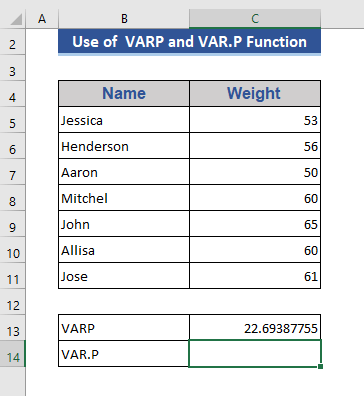 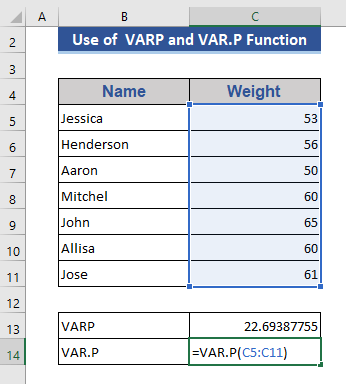 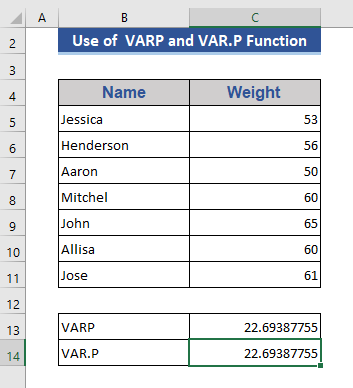 Here, we showed the use and result of the VARP and VAR.P function

The VARPA and VARP and VAR.P do the same operation. But VARP and VAR.P ignore the texts and boolean logic. On the other hand, the VARPA evaluates the text as 0, TRUE as 1, and FALSE as 0, and hence gives a different result.

Assume that some students’ weight is not available. So, the data set will look like this: 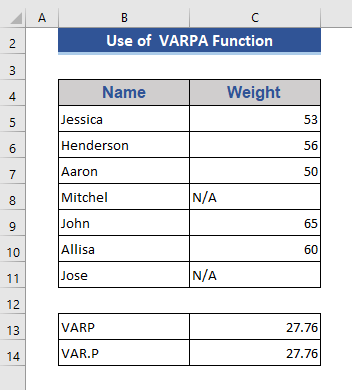 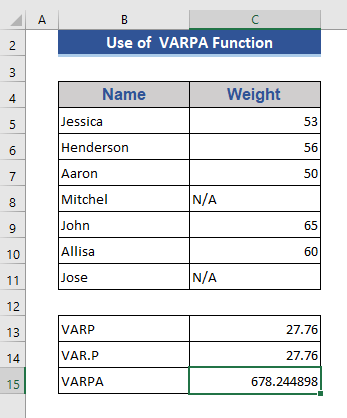 In this article, we showed the use of the VAR function in Excel with suitable examples. I hope this will satisfy your needs. Please have a look at our website Exceldemy.com and give your suggestions in the comment box.