How to Use SLN Function in Excel (3 Examples)

Excel SLN function applies this equation to calculate the depreciation of an asset. 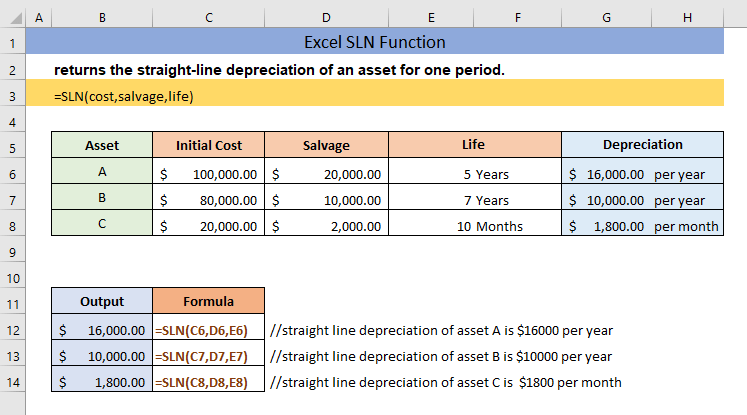 The above image gives a general overview of the SLN function. Throughout the article, we will know more details and usages of this function.

Introduction to The SLN Function

Excel SLN function returns the straight-line depreciation of an asset for one period. 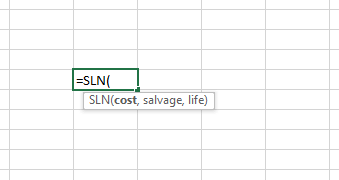 The SLN function returns one period straight line depreciation of an asset.

This function has been available in Excel since Excel 2000. So, any newer version of Excel 2000 has the SLN function.

3 Examples of Using The SLN Function in Excel

Now let’s see some examples which show different applications of the SLN function. 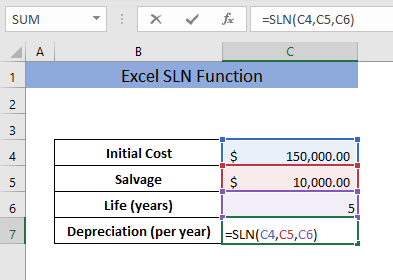 ➤ After that, press ENTER.

As a result, you will get the straight line depreciation of the asset. 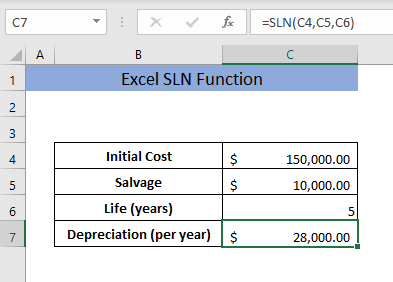 We can also use the SLN function to create a Microsoft Visual Basic Applications (VBA) macro in order to calculate the depreciation of an asset. First,

➤ Right click on the sheet name from the left panel of the VBA window and go to Insert > Module. 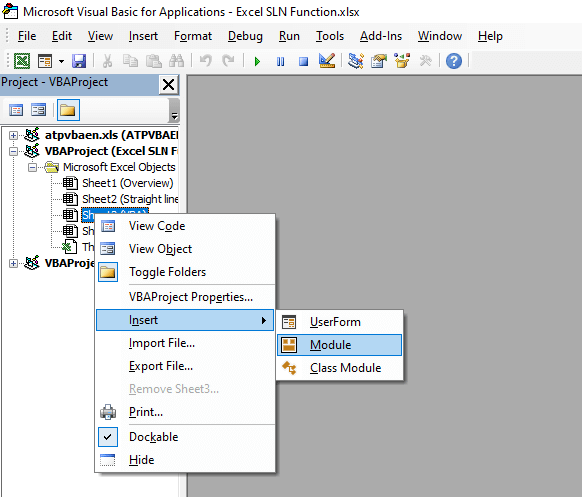 As a result, a Module (Code) window will be opened.

➤ Insert the following code in this window

The code will return the depreciation in cell C7 taking the cost from cell C4, salvage from cell C5 and life from cell C6.

➤ After that, close the VBA window.

➤ Go to the View tab and Select Macro. 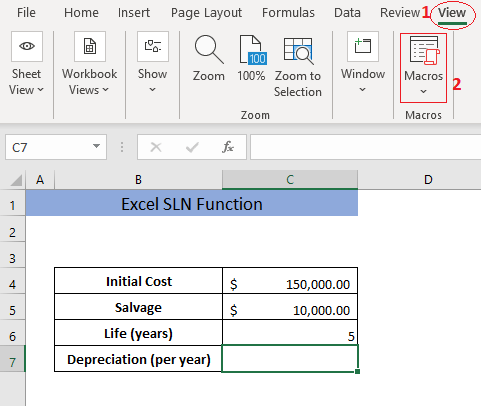 As a result, the Macro window will be opened.

➤ Select Depreciation from the box, Macro name, and click on Run. 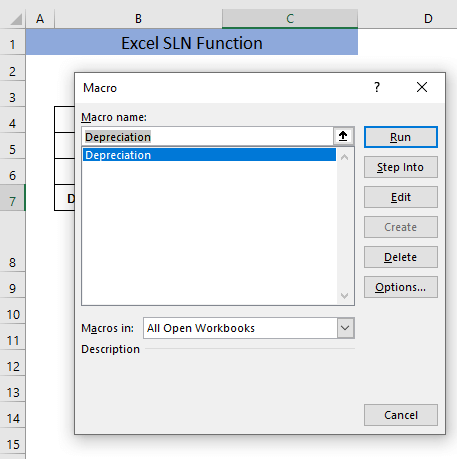 Finally, we will get the depreciation of the asset in cell C7. 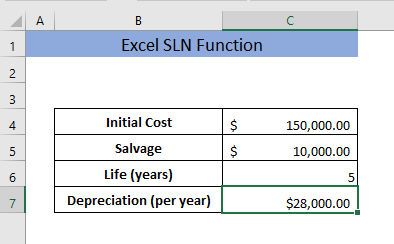 3. Calculate Depreciated Value for Every Year

Suppose we have the following dataset where the initial cost, salvage, and total life of an asset are given. Now, we will calculate the depreciated value of the asset in every year of its lifetime. 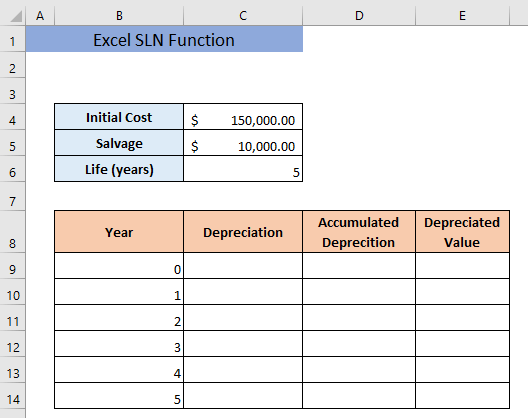 At the beginning (year 0) the asset won’t be depreciated and it will have its full value. So, for year 0, the depreciated value will be equal to the initial cost of the asset.

we have calculated the depreciation using the following formula,

Here, the formula will return the straight line depreciation of the asset. We have locked the reference cells because the initial cost, salvage, and life of the asset from cells C4, C5, C6 will be the same in each year’s calculations. 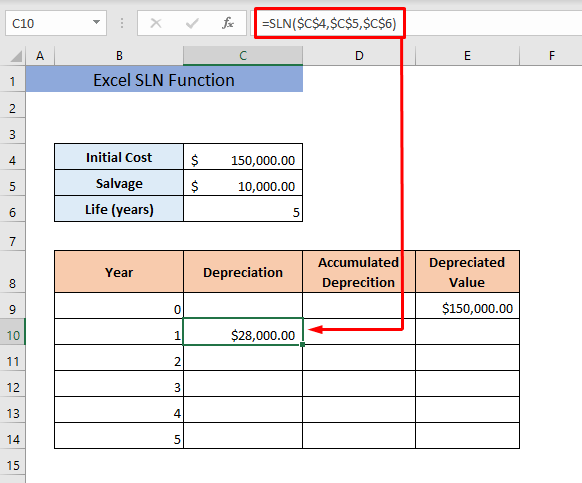 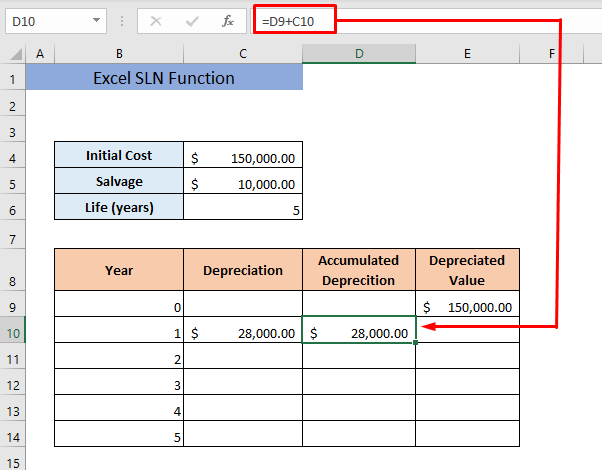 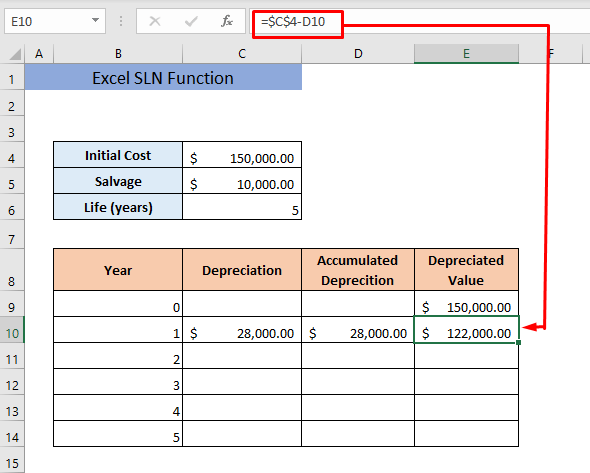 At last, we have simply dragged the cells C10, D10 and E10 to the end of our dataset. As a result, we have got the depreciation, accumulated depreciation, and depreciated value of the asset in every year of its lifetime.

In this similar manner, you can calculate the depreciated value of any asset in every year of its life, if the initial cost, salvage, and life are given. 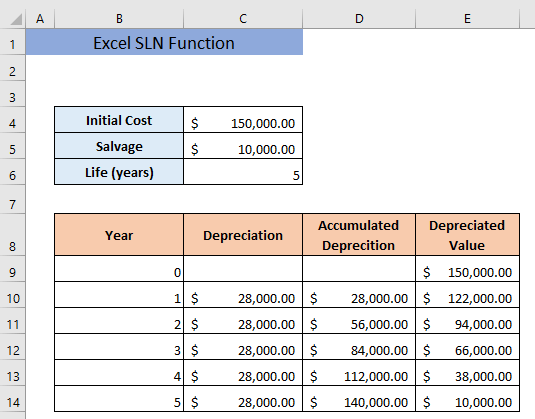 📌If the life argument is equal to 0, the function will return #DIV/0! error.

📌 If any of the supplied arguments are non-numeric, the function will show #VALUE! error.

I hope now you have a detailed understanding of Excel SLN function and of its applications. If you have any confusion, please leave a comment.