How to Remove Spaces in Cell in Excel (6 Easy Methods)

Having spaces in texts is quite a common thing. But having unnecessary spaces is a real issue that needs to be resolved. In this article, you will learn six different ways that you can use to remove spaces in a cell in Excel with ease. Now, let’s start this article and explore these methods.

The following image demonstrates an overview of the six methods to remove spaces in Excel that we will learn in this article. 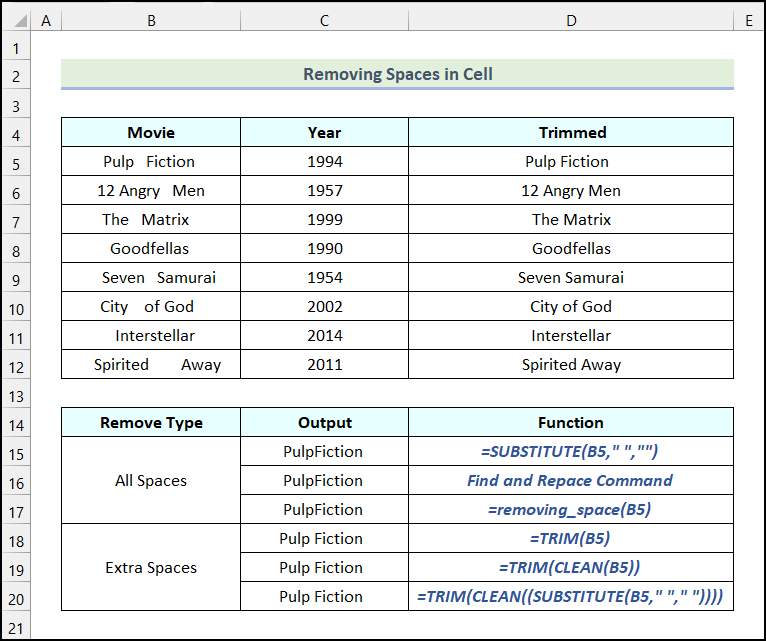 6 Efficient Methods to Remove Spaces in Cell in Excel

In this section of the article, we will discuss six efficient methods to remove spaces in a cell in Excel. Here, we will be using the Best Movie List as a dataset to demonstrate all the methods. So, let’s have a sneak peek of the dataset: 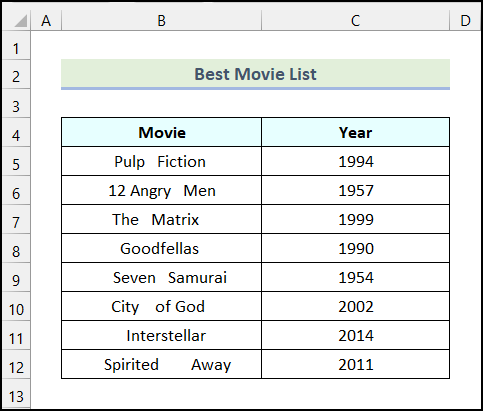 So, without having any further discussion let’s dive straight into all the methods one by one.

The easiest way to remove spaces in a cell in Excel is to use the TRIM function. Now, follow the steps below to see how to use this function. 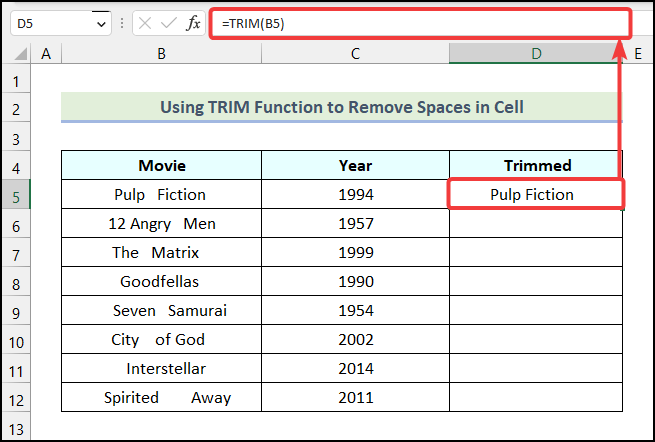 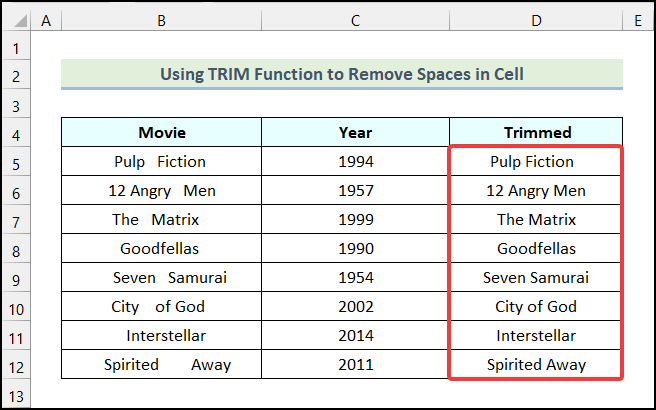 Note: This is the best as well as easiest way to remove spaces from the text in Excel. You are recommended to use this method prior to any other methods.

Read more: How to Remove Extra Spaces in Excel 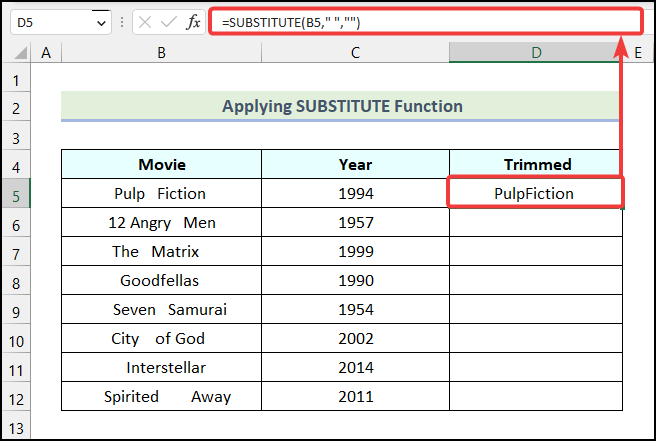 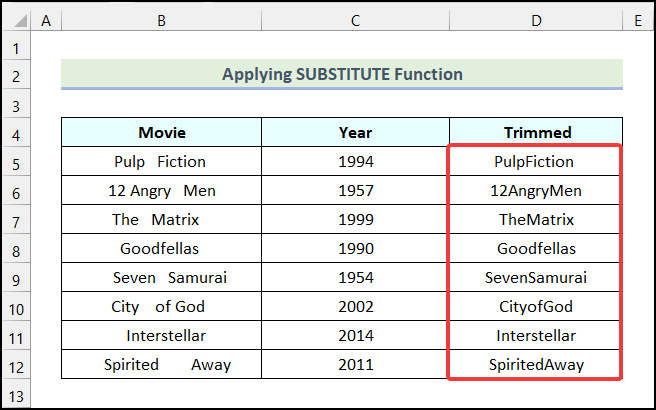 3. Utilizing CLEAN with TRIM Function to Eliminate Spaces in Cell 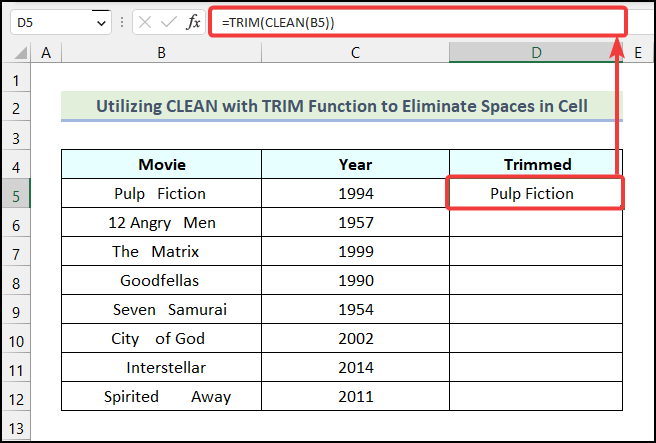 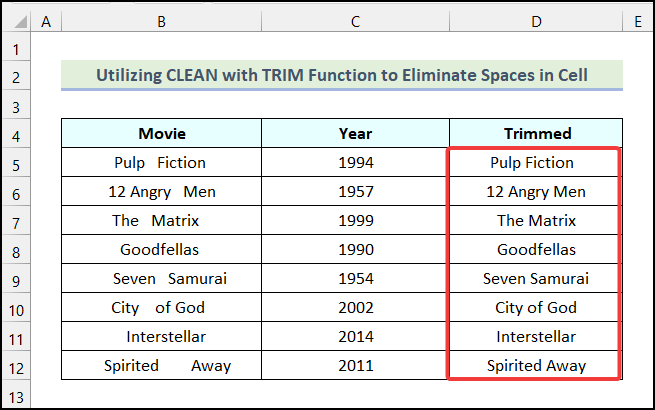 In this section of the article, we will use a combination of the TRIM, CLEAN, and SUBSTITUTE functions to remove spaces in a cell in Excel. Now, let’s follow the steps mentioned below to do this.

Here, cell B5 represents the first cell of the Movie column. 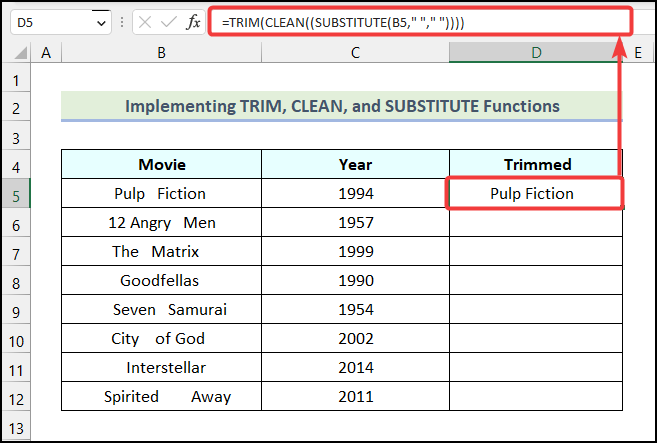 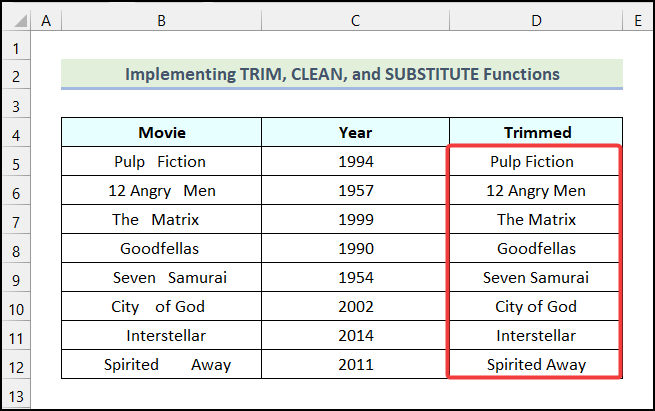 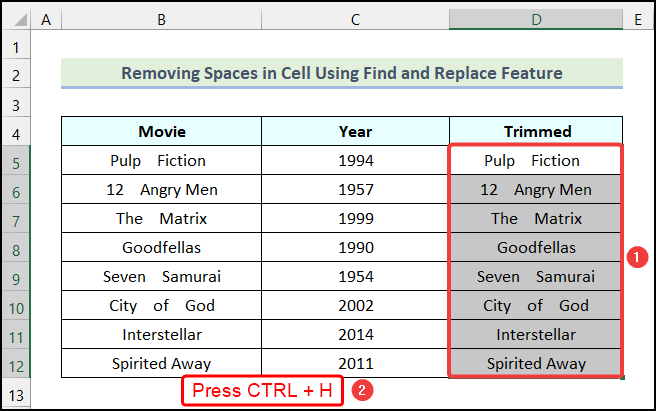 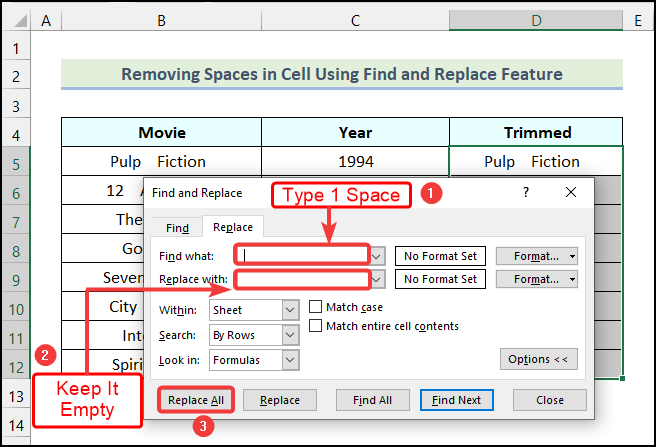 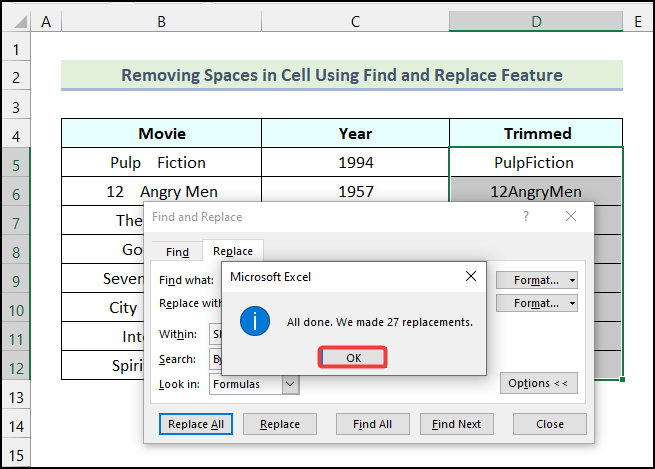 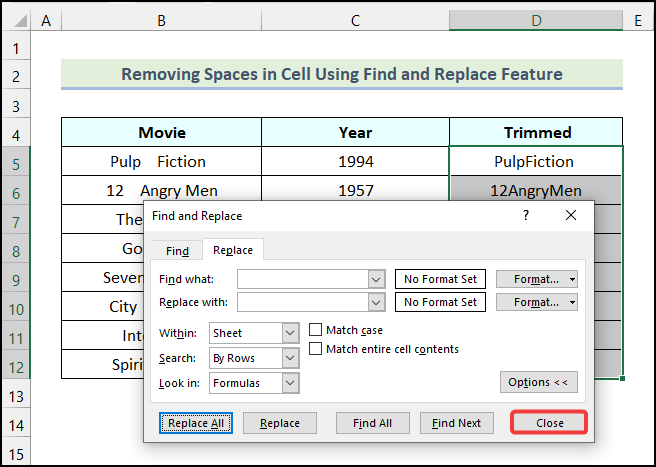 Consequently, the spaces will be removed from the selected cells as shown in the following picture. 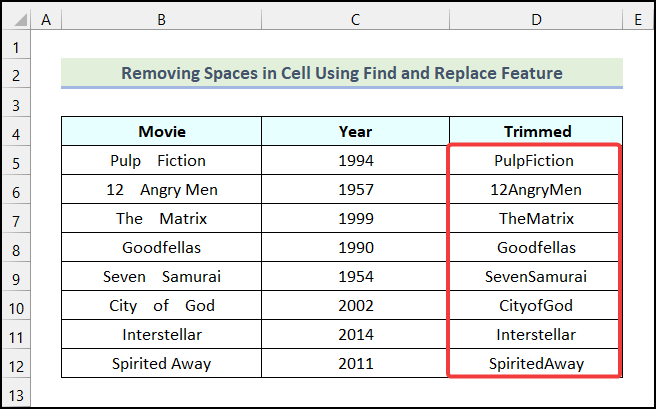 In the final method of the article, we will incorporate the VBA Macro feature of Excel to remove spaces in a cell. So, let’s use the instructions outlined below to do this. 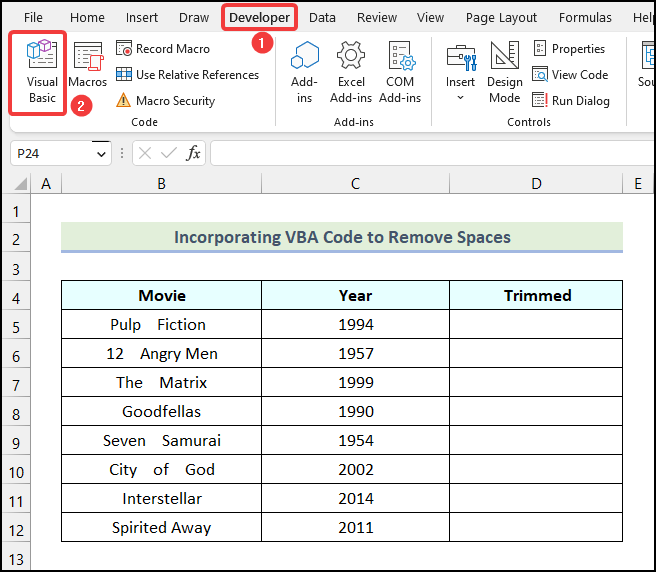 As a result, the Microsoft Visual Basic for Applications window will open on your worksheet. 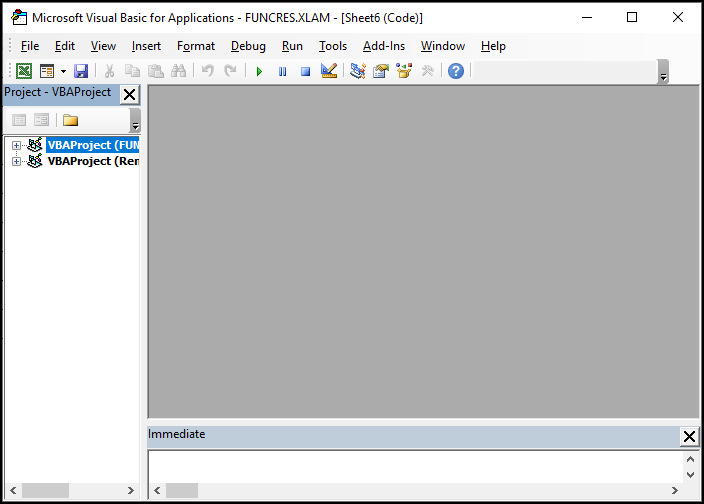 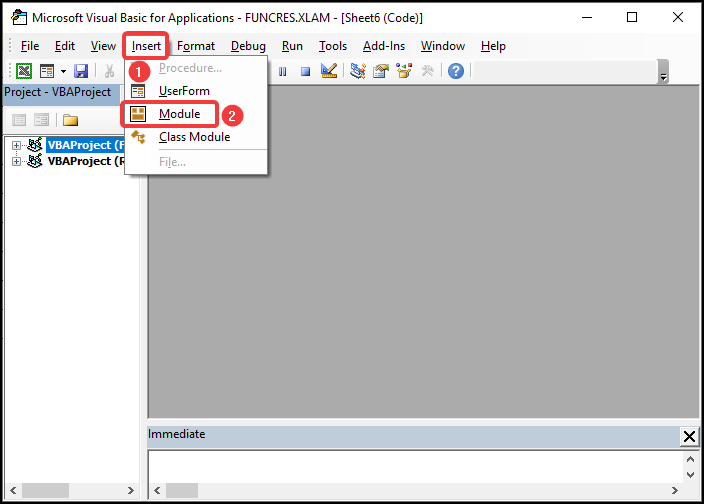 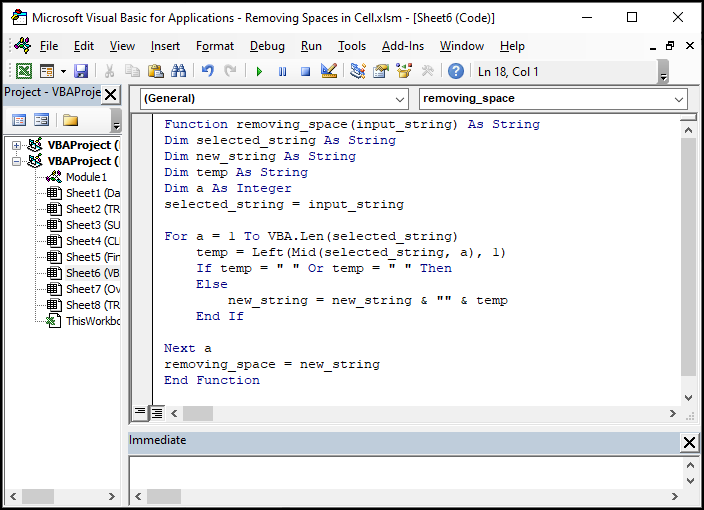 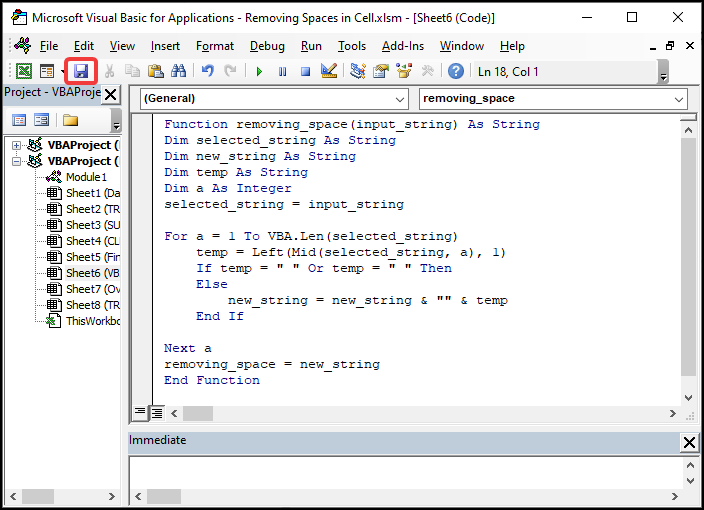 Here, cell B5 indicates the first cell of the Movie column. 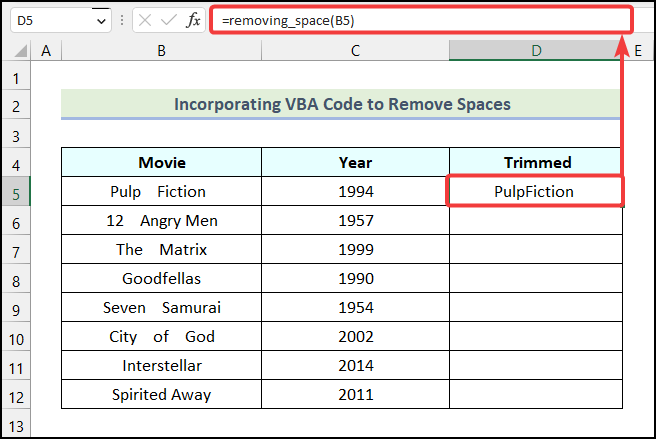 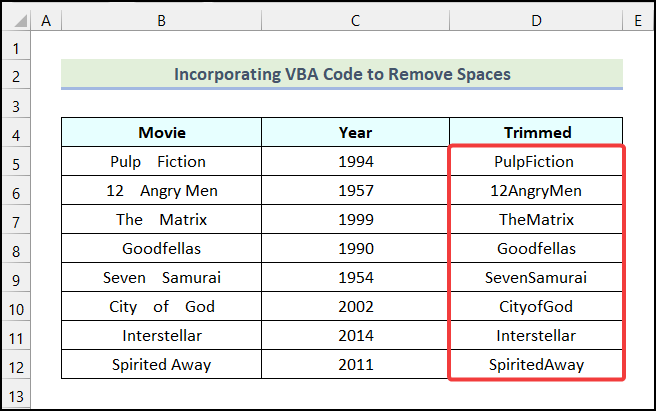 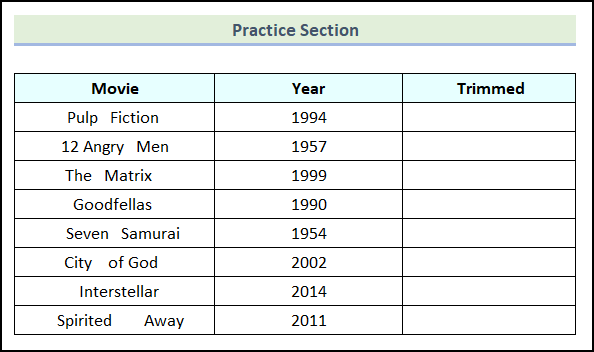 To sum up, we have discussed 5 ways, to remove spaces in Excel. You are recommended to download the practice workbook attached along with this article and practice all the methods with that. And don’t hesitate to ask any questions in the comment section below. We will try to respond to all the relevant queries asap. And please visit our website ExcelDemy to explore more.