Excel Formula to Count Cells with Text (All Criteria Included)

You can download our practice workbook here that we’ve used to prepare this article.

To count cells under several criteria, the COUNTIF function does the best trick among all methods.

Here, in Column B, different sorts of words & values are present. You need to count the cells containing texts only.

So, the result will return as 4 as it excludes TRUE & FALSE. TRUE & FALSE are logical values in Excel this is why they won’t be counted as Texts. We’ll see later in the methods how we can bring back the texts- TRUE &  FALSE too. 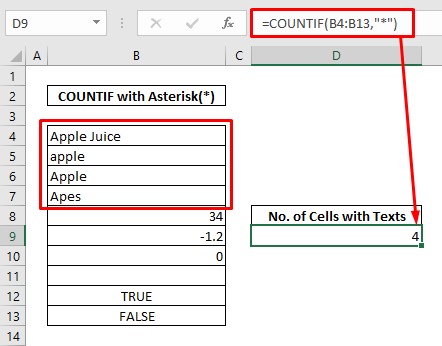 Now, we need to count cells that contain ‘Ap’ among all texts.

So, among all cells from B4 to B13, 4 words are there that contain ‘Ap’ inside the texts. 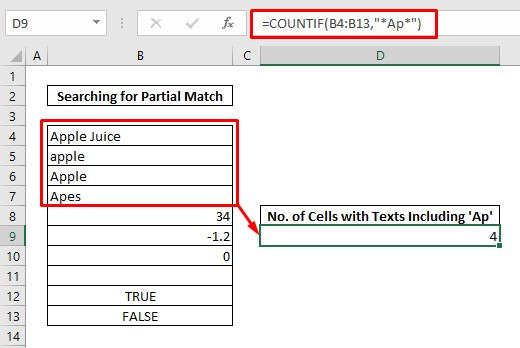 If we want to find the word ‘Apple’(Not Case-sensitive) only from the cells, then type =COUNTIF(B4:B13,"Apple") & press Enter.

So, 2 times this word has appeared exactly in the cells.

This formula excludes Apple Juice & will look for exact matches ‘Apple’ only.

But another fact is, this function is not case-sensitive. We’ll have a solution for this issue in another method in this article. 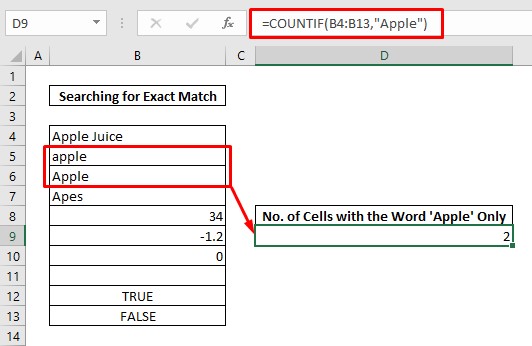 We can also select a cell that contains a word & then look for how many times this appears in the whole column or a range of cells. There are two cases here. We’ll search for a partial match first.

The resultant value will be 3 as we’ve searched for the texts (apple) lying in Cell B5 in all cells including itself. 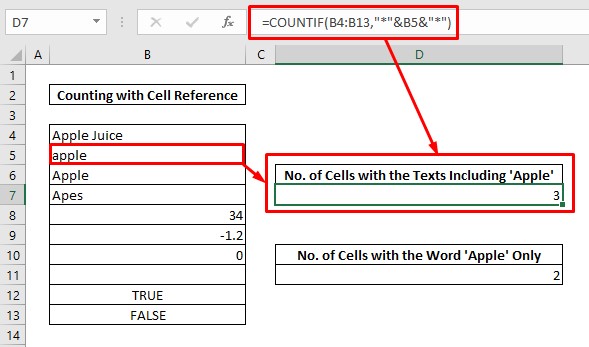 And if we want the exact match, then we have to type =COUNTIF(B4:B13,B5) only excluding the quotation symbols & asterisks. So as here we’re referring to the Cell B5 which contains the word ‘apple’. The result will return as 2 since exactly this word has appeared in Cells B5 & B6 only. It’ll exclude B4 which contains 2 words ‘Apple Juice’. 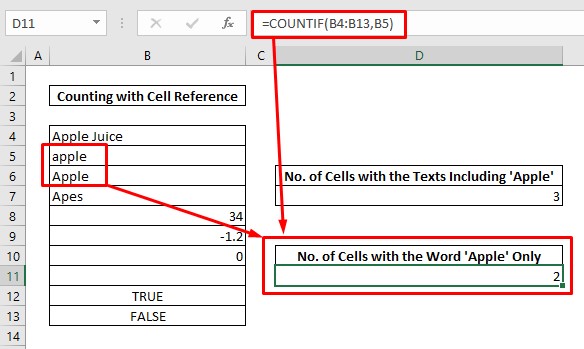 1.5 Using a Wildcard to Count Cells with Fixed Position of the Characters in Texts

We’ll get the count value as 2 as in our range of cells, only two words (apple & Apple) have exactly 5 characters among which the 5th one is ‘e’. And the word ‘Apple Juice’ has not been counted here because this whole text contains 11 characters including a space. 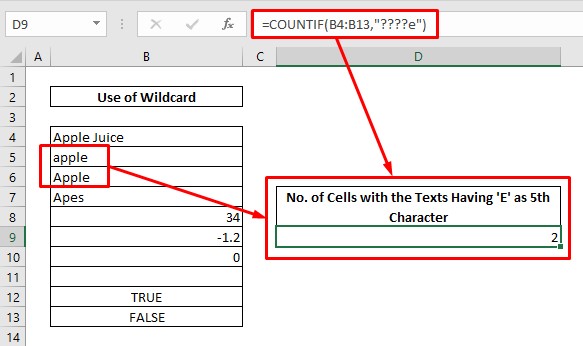 A Minor Limitation of Using COUNTIF Function & How to Solve It?

The COUNTIF function is really flexible to use but this function is unable to count more than 255 characters in a string. So to solve this issue, you have to concatenate two or more text strings by using Ampersand(&) between them. To know more about this, you can have a look at this recommendation from Microsoft.

2. Using COUNTIFS to Count Cells with Text under Multiple Criteria

The COUNTIFS function is the subcategory of the COUNTIF function & this COUNTIFS will let you add multiple conditions to combine together.

To do this, we have to follow these simple steps-

So, now you’re obtaining the number of cells as 3 under the mentioned criteria. And like before, as TRUE & FALSE are logical values in Excel they will be excluded from being considered as texts. 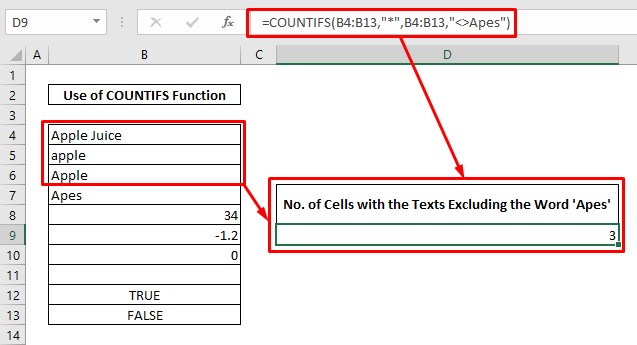 The SUMPRODUCT is another useful function we can use to count cells with different types of requirements by integrating it with other functions.

We’ll use the same dataset here to insert this function.

SUMPRODUCT is generally used to sum all the numbered values in an array that can contain a huge range of cells along the columns & rows.

The ISTEXT is a logical function here that finds out if the cells contain text strings (TRUE) or not (FALSE).

Before this ISTEXT function ‘–’ (Double Hyphen, known as Double Unary too) has been used to convert the logical values gained from the ISTEXT function into 1 (True) or 0 (False).

So, the SUMPRODUCT function lying outside will then sum up all 1’s & 0’s and give you the result as Count values. 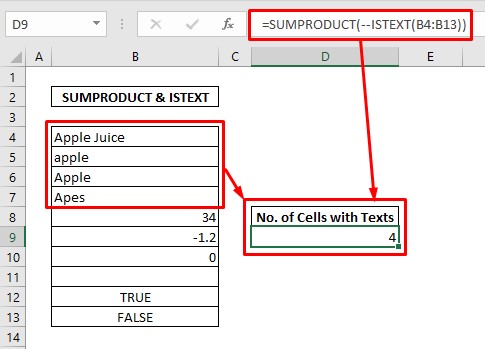 Now, we’ll incorporate SUMPRODUCT & LEN functions here. The LEN function determines or counts the characters in a string that contains number of texts. So, if we get to know through this LEN function if a cell contains at least 1 character then we’ll understand that cell contains text(s) or number(s) or any other value(s). And the SUMPRODUCT will be used here to count those cells like before.

But here, you’ll see the result returning as 9. It’s because the LEN function counts every single character including spaces too. It only excludes blank cells. 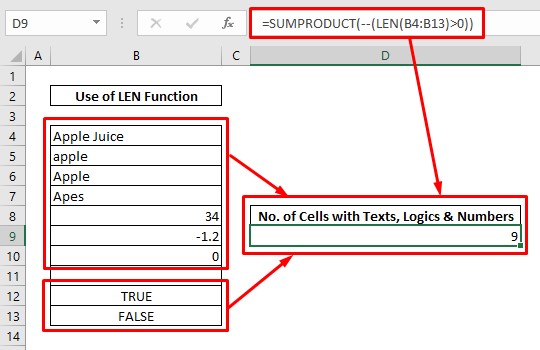 If we want to count text cells along with case-sensitive criteria then we have to merge SUMPRODUCT, FIND & ISNUMBER functions here. So, from our dataset, if we want to know how many times the word ‘Apple’(with Uppercase) has appeared in the cells then we have to follow these steps-

➤ Type the following formula in the output Cell D9:

You’ll see the resultant value as 2 as this function has excluded the word ‘apple’(wth Lowercase) while executing the process.

Here, the ISNUMBER is another logical function that determines if the string in a cell is a number(TRUE) or not(FALSE).

And the FIND function looks for a specific text or value mentioned inside a fixed range of cells or array. 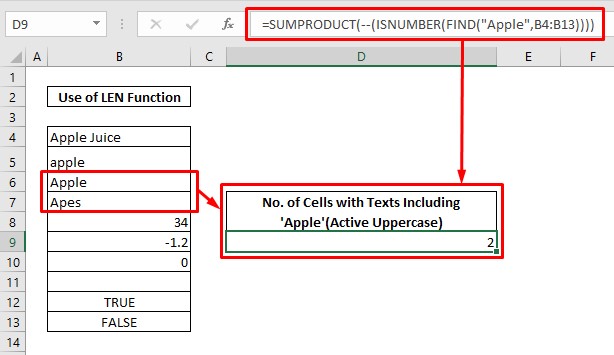 Now we’ll count how many logical values are present in our dataset if we want to make them count as texts too.

So, you’re seeing the resultant value as 2 as it counts only logical values from the range of cells.

And here the ISLOGICAL function determines if the characters in a cell return as a logical value (TRUE) or not (FALSE). 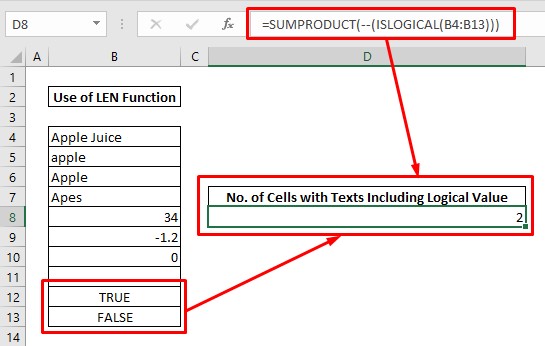 Note: You might find Double-Hyphen or Double-Unary as a Long Dash here as texts while reading this article but in the pictures, you’ll find them with appropriate view.

Read More: How to Count Cells with Specific Text in Excel (Both Case Sensitive and Insensitive)

4. Inserting Subtraction Formula with COUNTA and COUNT Functions to Count Cells with Text

And in our last method, we’re going to apply simple subtraction formula between two COUNTA functions. Here, the COUNTA function will count all the non-blank cells & the COUNT function will count all the cells with number strings. So, if we subtract the number of cells containing numerical values from the number of non-blank cells, we’ll have our required result.

➤ Type the following formula in the output cell:

This method includes all cells containing logical values or strings too & that’s why we’ll get the result as 6. 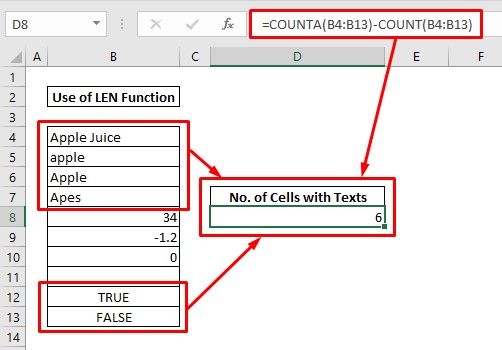 So these are all basic, easy & convenient techniques you can apply anytime in spreadsheets to count cells with text by using an Excel formula under different conditions. Hope, this article has helped you to learn all the methods to count cells with texts. If you have any questions or feedback then please comment here. You can also have a glance at our more interesting & informative articles on Excel functions & applications on this website.

How to Calculate Discount in Excel (2 Easy Methods)

How to Consolidate Data in Excel from Multiple Workbooks (2 Methods)

How to Convert Inches to Feet in Excel (2 Handy Ways)