How to Use FIXED Function in Excel (6 Suitable Examples) 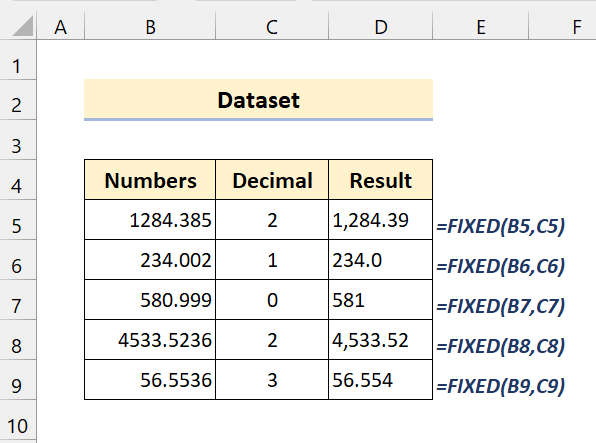 The above screenshot is an overview of the article. It represents a simplified application of the FIXED function in Excel. You’ll learn more about the dataset as well as the methods and procedures under different criteria in the following sections of this article.

The Microsoft Excel FIXED function returns a text illustration of a number. It rounds a number to the fixed number of decimals, formats the number in decimal format using a period and commas.

The FIXED function returns a value in Text/String format.

How to Use FIXED Function

The FIXED function gives you value in a text form. Basically, our input is a number in a decimal form. Maybe you need a particular number of values after the decimal point. You can use this to show a specific number of values with or without commas.

Take a look at the following screenshot:

In the following section, we will provide you with six simple but effective examples. I hope it will give you a clear idea about the FIXED function in excel. We recommend you learn and apply all these methods to your dataset. It will surely enrich your Excel knowledge.

1. FIXED Function in Excel When ‘[decimal]’ Argument is Positive or Negative

Now, from the introduction, you have already learned that you have to provide a particular value in the position of the decimals. It will give you that number of numbers after the decimal portion.

So, if you give 2 in the decimal position, it will give you a rounded value with 2 decimal points.

Now, what will happen if you give a negative number in the decimals argument?

Basically, if your given decimals are negative, it will round up to the left of the decimal point. But this time, there will be no decimal point. 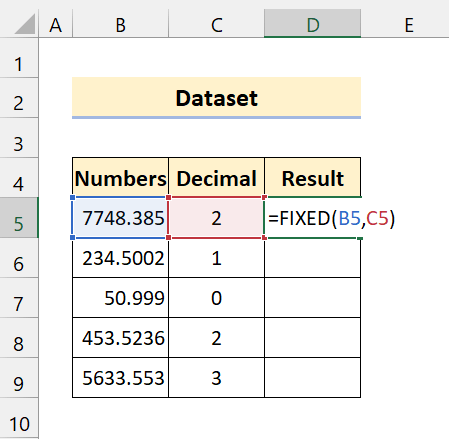 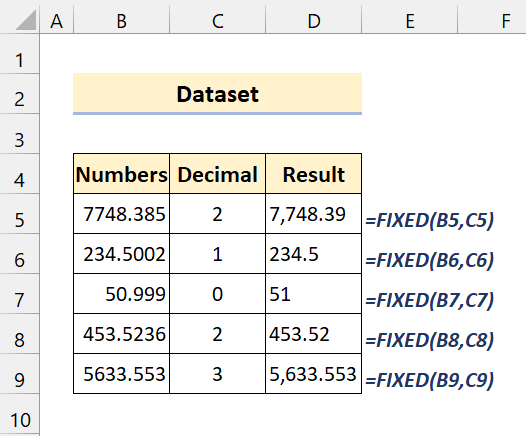 Now, you can perform the same procedure with negative values like the following screenshot: 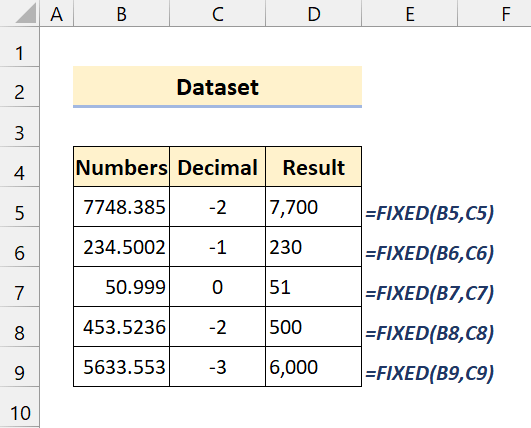 As you can see, we have successfully used the FIXED function of Excel.

2. If ‘[decimals]’ Argument is Omitted in Excel 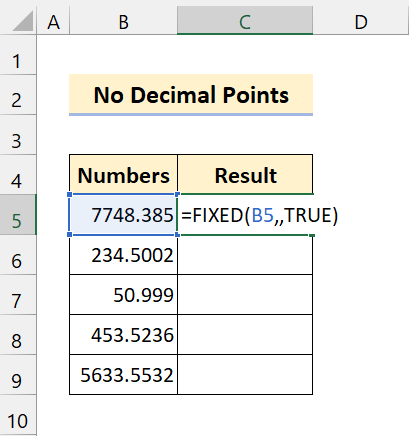 Here, we are giving the no_commas parameter TRUE to remove the commas from the result.

3. FIXED Function in Excel If the ‘[no_commas]’ Argument is TRUE or FALSE

Previously, we discussed the arguments of the FIXED function in Excel. In the no_commas, we can give it TRUE or FALSE.

If your no_commas argument is TRUE, there will be no commas in the result.

The opposite will happen if you set it to FALSE. 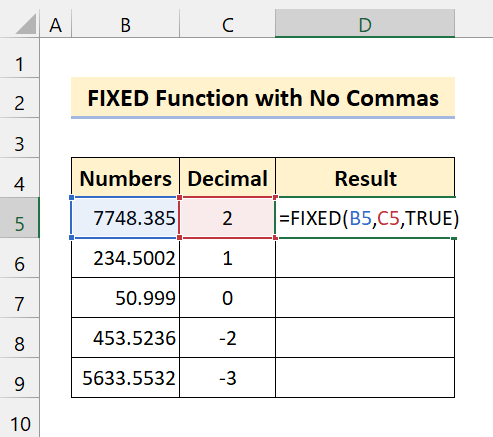 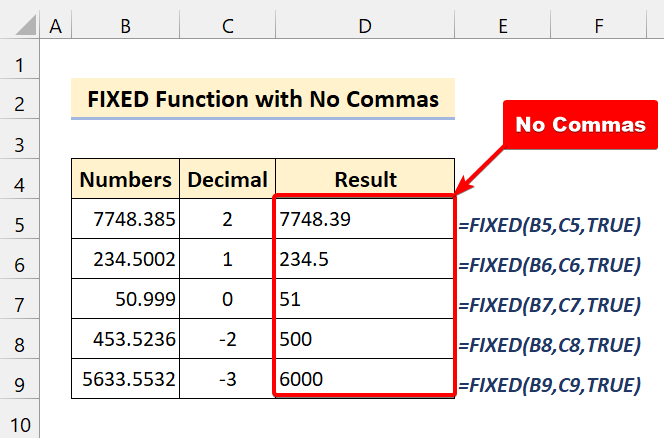 Similarly, if you want commas in the output you can set it to FALSE. 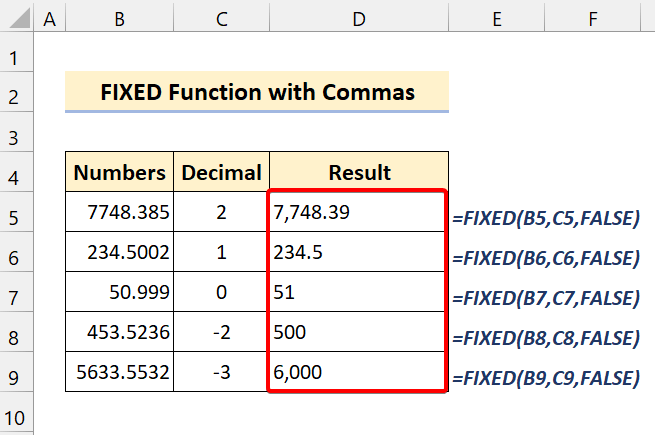 As you can see, we are successful in using the FIXED function both with commas and no commas.

4. If ‘[no_commas]’ Argument is Omitted in Excel

If you omit the no_commas argument from the FIXED function, Excel will take FALSE as a default value. 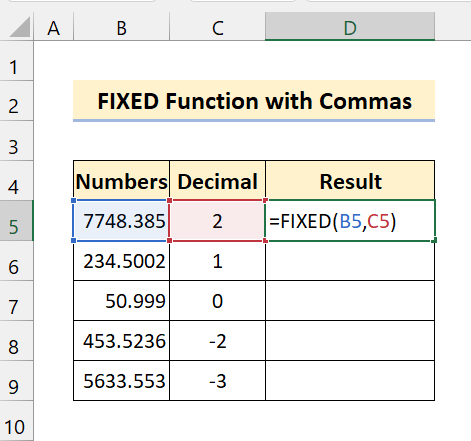 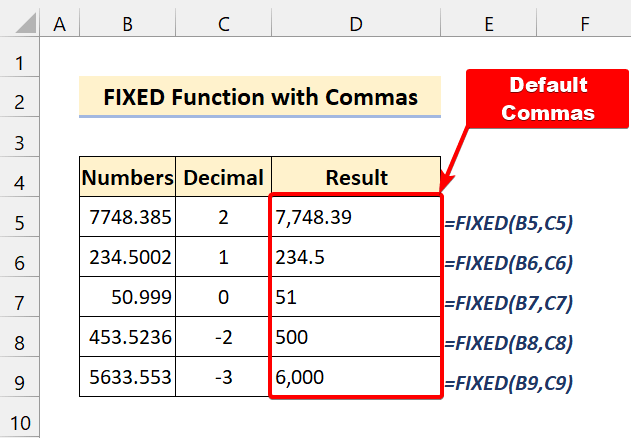 5. FIXED Function with both ‘[decimals]’ and ‘[no_commas]’ Arguments are Omitted

Now, you may ask what would happen if I omit both decimals and no_commas argument?

In this case, Excel will do the following:

-if decimals is omitted, it will automatically set the decimal point to 2.

-if no_commas is omitted, it will automatically set the no_comnas to 0 or FALSE. 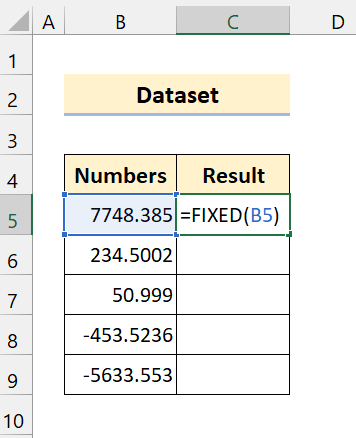 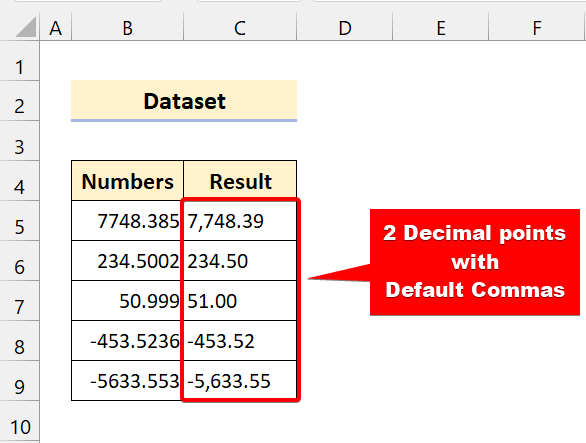 As you can see, we have successfully used the FIXED function in Excel with both omitted arguments.

6. Concatenate with FIXED Function Together with CONCAT in Excel

You can mix the CONCAT function with the FIXED function. You can mix it with any function to get your desired output.

The following screenshot will give you a clear idea:

Here, we used the FIXED function with the CONCATENATE function to get the decimal values with 2 decimal points.

✎ The FIXED function gives us the output in Text/String form. You can change it using the Number Format.

✎ If you give non-numeric arguments, it will show #VALUE! Error.

✎ As the output is in text form, you can not use it for numeric calculations.

✎ Numbers in Microsoft Excel can have up to 15 significant digits, but decimals can be as large as 127.

To conclude, I hope this tutorial has provided you with a piece of useful knowledge to use the FIXED function in Excel. We recommend you learn and apply all these instructions to your dataset. Download the practice workbook and try these yourself. Also, feel free to give feedback in the comment section. Your valuable feedback keeps us motivated to create tutorials like this.

Don’t forget to check our website Exceldemy.com for various Excel-related problems and solutions.

Hello! I am Shanto. An Excel & VBA Content Developer. My goal is to provide our readers with great tutorials on various Excel-related problems. I hope our easy but effective tutorials will enrich your knowledge. I have completed my BSc in Computer Science & Engineering from Daffodil International University. Working with data was always my passion. Love to work with data, analyze those, and find patterns. Also, love to research. Always look for challenges to keep me growing.