How to Calculate 7 Day Moving Average in Excel (4 Ways)

You can download the Excel file from the following link and practice along with it.

What is the Moving Average?

The moving average is a type of average of numbers where the time frame remains the same but the data keeps updating as new data is added.

For example, we have a list of the daily arriving customer numbers of a shop. To get the average customer number, we generally sum up the total number of customers for 7 days and then divide the sum by 7. This is the general average calculation concept.

In the case of moving average or running average, the days continue. So the number of customers keeps updating. As a result, the moving average changes too. It’s not a static value now. 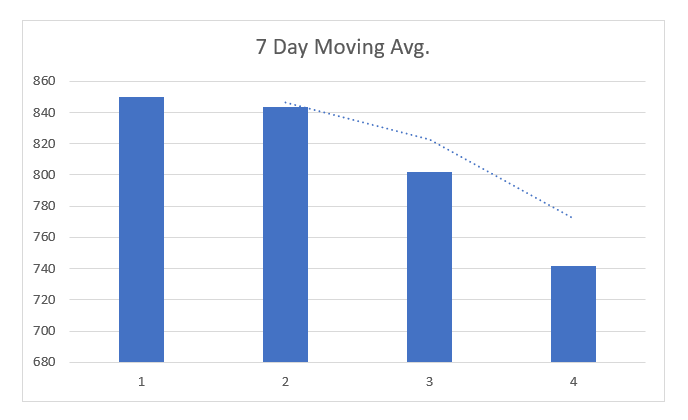 Types of the Moving Average

The moving average can be divided into 3 major types. Those are,

Weighted Moving Average: Suppose, you want to forecast the average temperature. It is possible that the latest data can predict better than the old data. In that case, we put more weight on the recent data. Thus, calculating the moving average with weights is called Weighted Moving Average.

4 Ways to Calculate the 7 Day Moving Average in Excel

1. Use the AVERAGE Function to Calculate the 7 Day Simple Moving Average in Excel

The easiest way to calculate the moving average in Excel is to use the AVERAGE function.

All you need to do is,

❷ Then press the ENTER button. 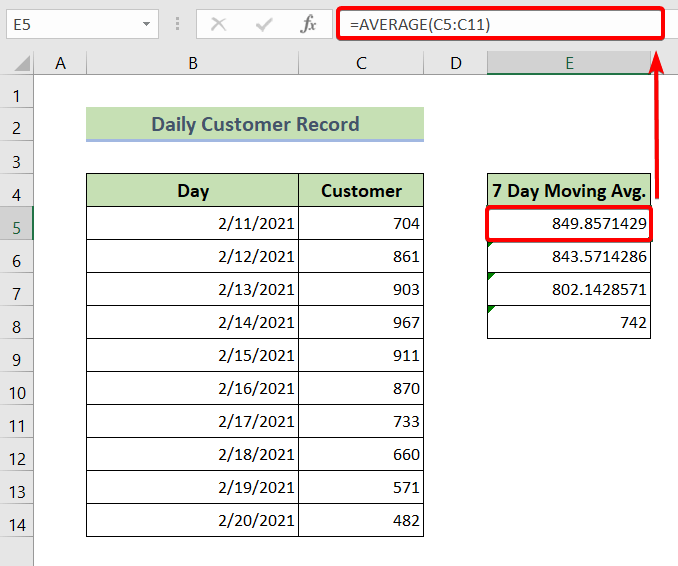 The alternative way to calculate the simple moving average is to use the SUM function.

To use the function,

❶ Select a cell first, where you want to return the moving average. After that, enter a cell range of 7-day data in the argument section of the SUM function like the following formula:

❷ After that press the ENTER button to execute the formula. 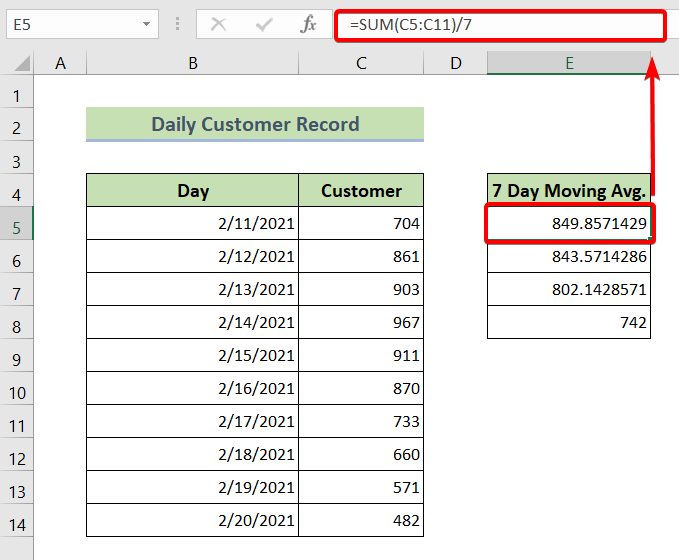 To calculate the weighted moving average, follow the steps below:

❷ Now press the ENTER button to execute it. 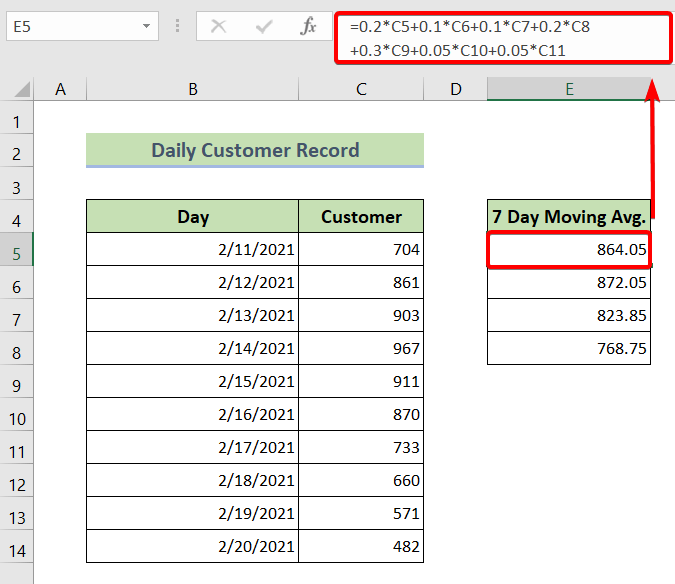 The general formula to calculate the 7-day Exponential Moving Average (EMA) in Excel is,

In the formula above, you can insert any value for the N as per your recruitment. As we are calculating the 7-day EMA, thus N = 7.

As for this particular example, we don’t have any last EMA value hence,

❶ Enter the following formula in cell E5 to copy the first value of the data. 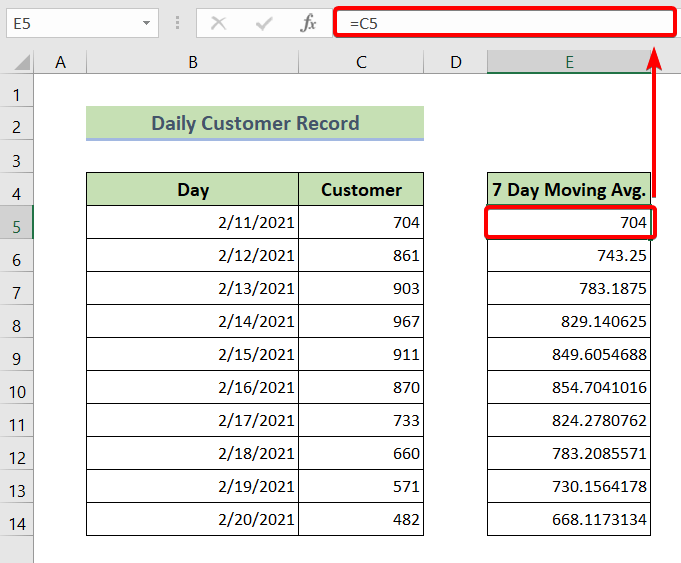 ❷ Then type the following formula in cell E6 and the rest of the cells.

❸ Finally press the ENTER button to execute the above formula. 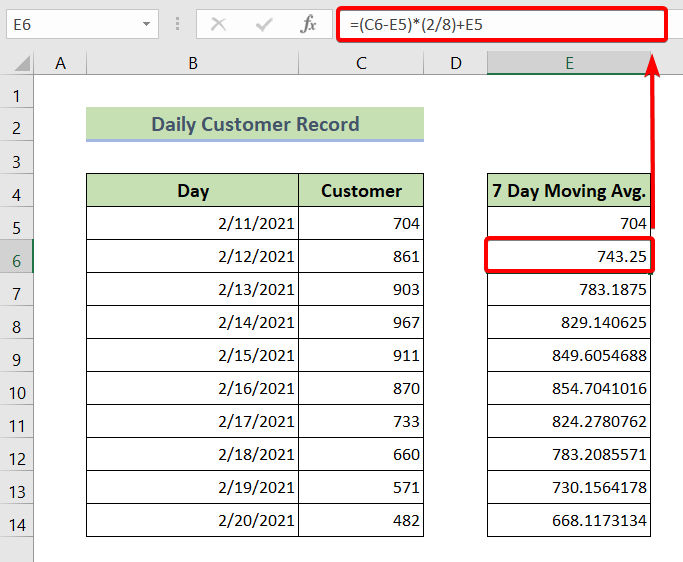 To insert a moving average chart in Excel,

❷ Then go to the Insert tab.

❸ After that insert a Clustered Column 2-D chart. 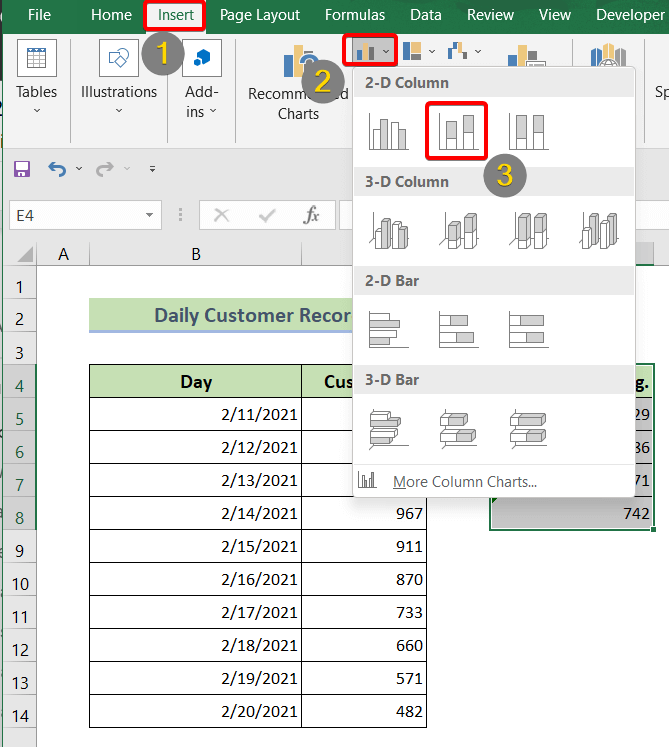 ❹ Then click on the 2-D chart and go to the Chart Design tab.

❼ under the Trendline, you will find the Moving Average. Just click on it to apply. 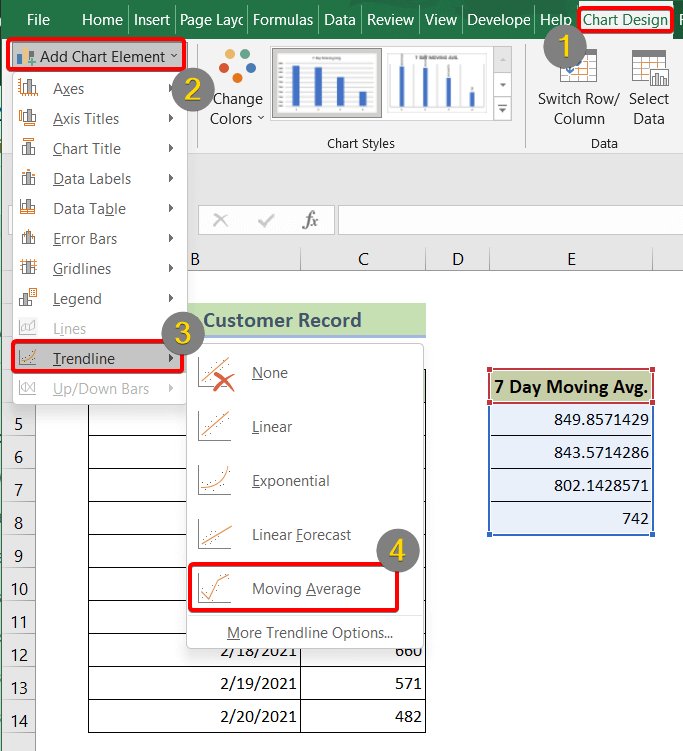 After going through all the above steps, you will get a moving average chart like the following one: 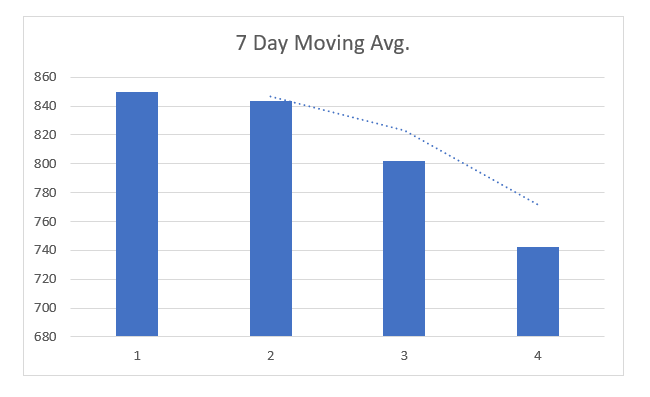 To sum up, we have discussed how to calculate 7-day moving average in Excel. You are recommended to download the practice workbook attached along with this article and practice all the methods with that. And don’t hesitate to ask any questions in the comment section below. We will try to respond to all the relevant queries asap. And please visit our website Exceldemy to explore more.