How to Generate Moving Average in Excel Chart (4 Methods)

Moving average is a common term in time-series analysis to review previous data and predict the future. In this article, I’ll show the fundamental concept of moving average, its types, calculation methods, and especially the process of creating moving average in an Excel chart.

Basics of Moving Average in Excel

What is Moving Average in Excel

Theoretically, the definition of moving average may differ a little bit as its usage includes in the field of statistics, finance, marketing, and so on.

Whatever, the tool can be used by investors to analyze the direction of trends and traders to monitor the price.

Basically, there are three types of moving averages.

The average of the latest number of periods of a data series can be calculated using a simple moving average.

The weighted moving average calculates the average of the previous n periods. Each data point from the prior time period decreases the weighting.

How to Calculate Moving Average in Excel

We can easily calculate the moving average in Excel by using two simple functions.

If you want to utilize the AVERAGE function, the formula will be like the following-

On the other hand, if you want to use the SUM function, the formula will be-

The two calculation methods are given in the following figure. Just have a glimpse of it. 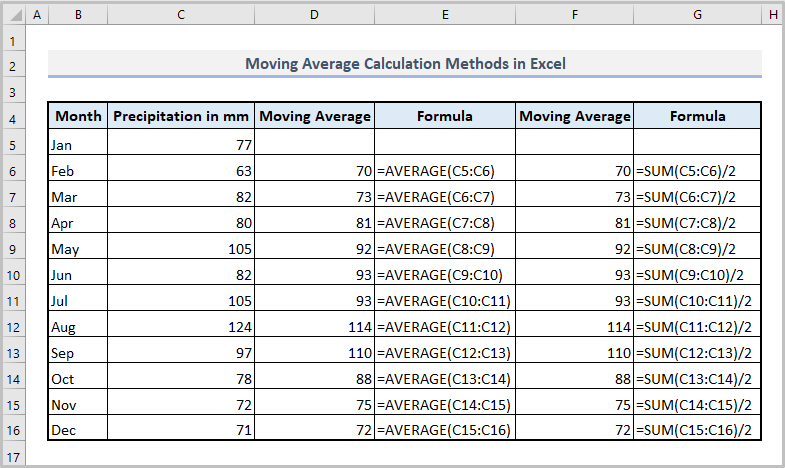 How to Generate Moving Average in Excel Chart (4 Productive Methods)

This is the turning point of our article. Now, we’ll see the process of making charts of different types of moving averages in Excel. Before that, let’s be introduced with the dataset. This is the monthly precipitation data of Washington D.C. which is adapted from the US Climate Data. 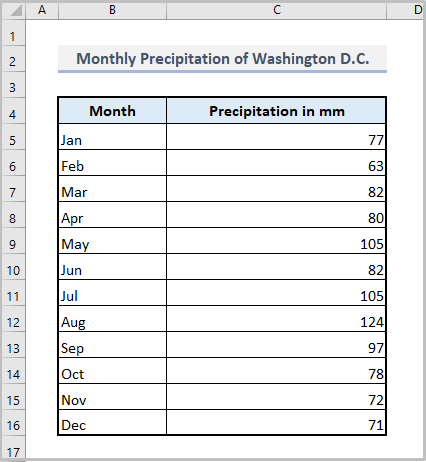 1. How to Generate Moving Average in Excel Chart

Do you know the process of creating charts in Excel?

If not, don’t be worried as it is quite simple. 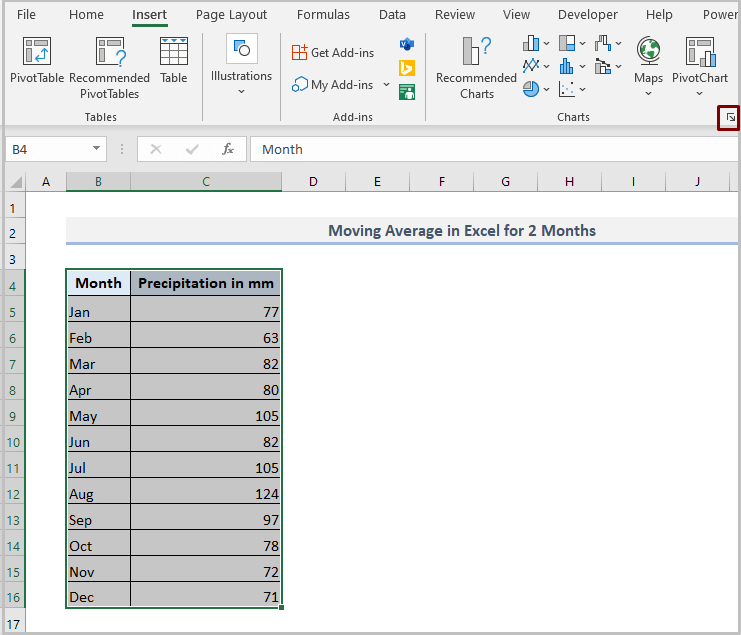 After that, you’ll see the following figure. 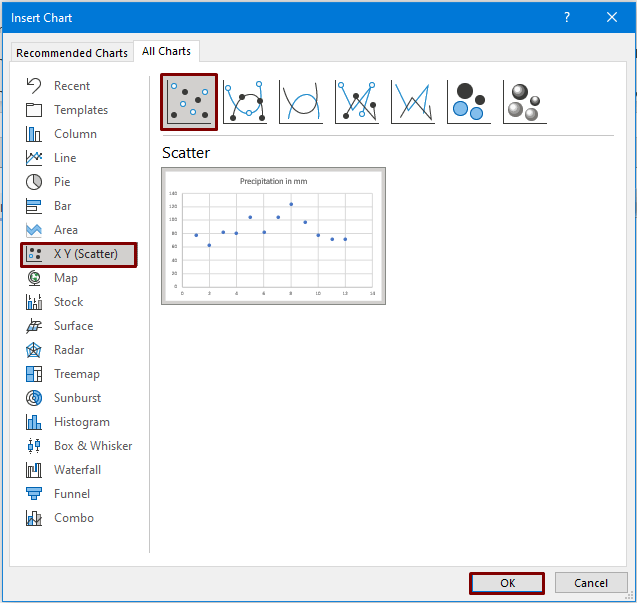 I have chosen the Scatter chart option, but you can pick another one depending on your purpose.

Finally, a chart is created and this is like the following. 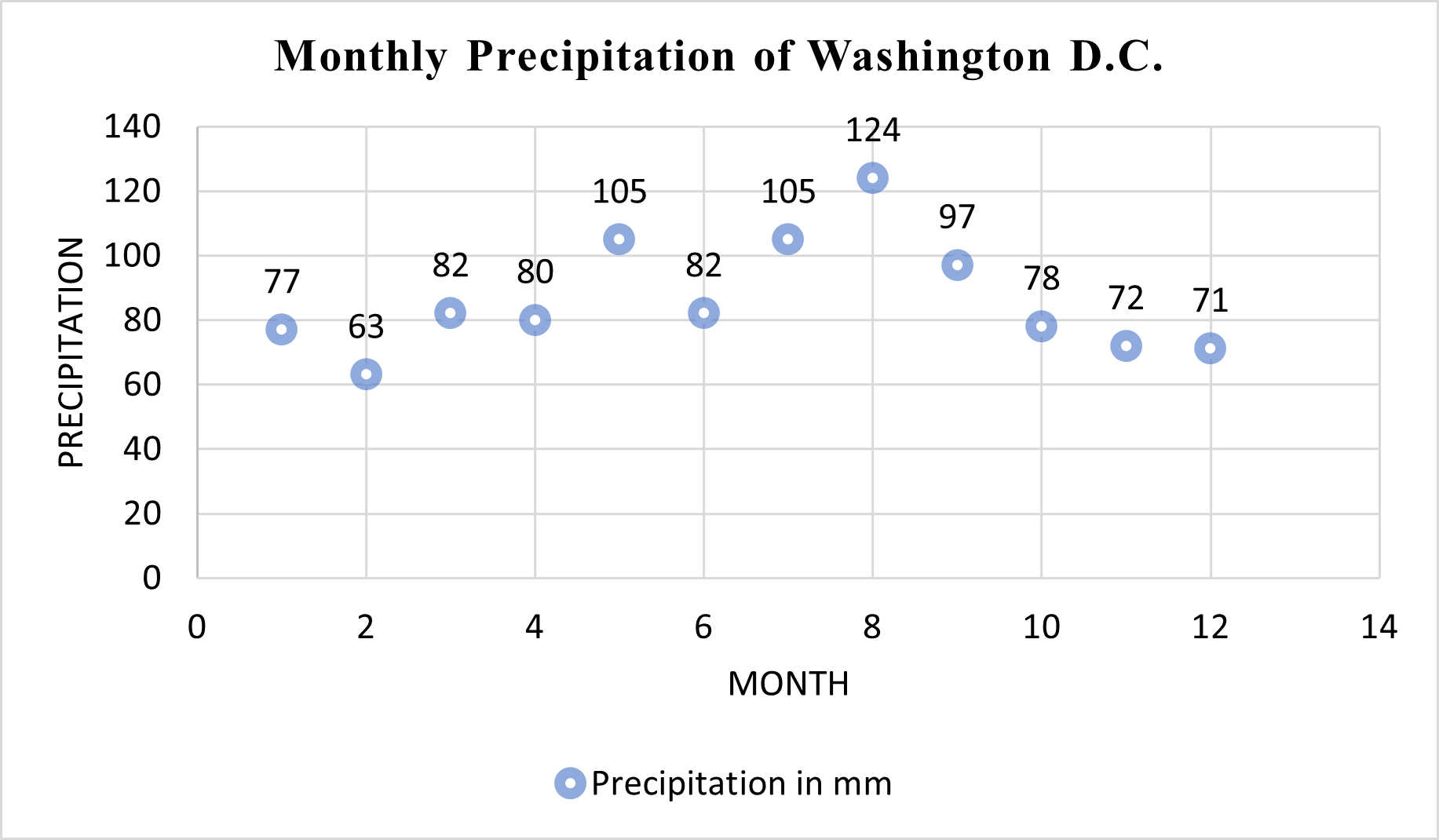 Then, follow the steps to create a moving average line.

⇒Click on the Plus (+) icon in the upper-right corner of the chart.

⇒Move the cursor on the Right arrow of the Trendline element. 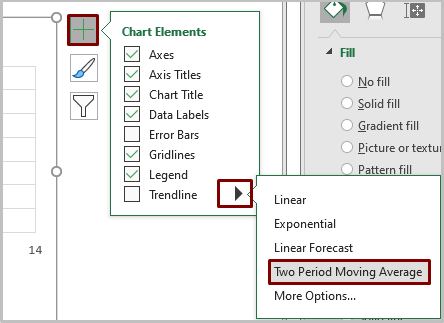 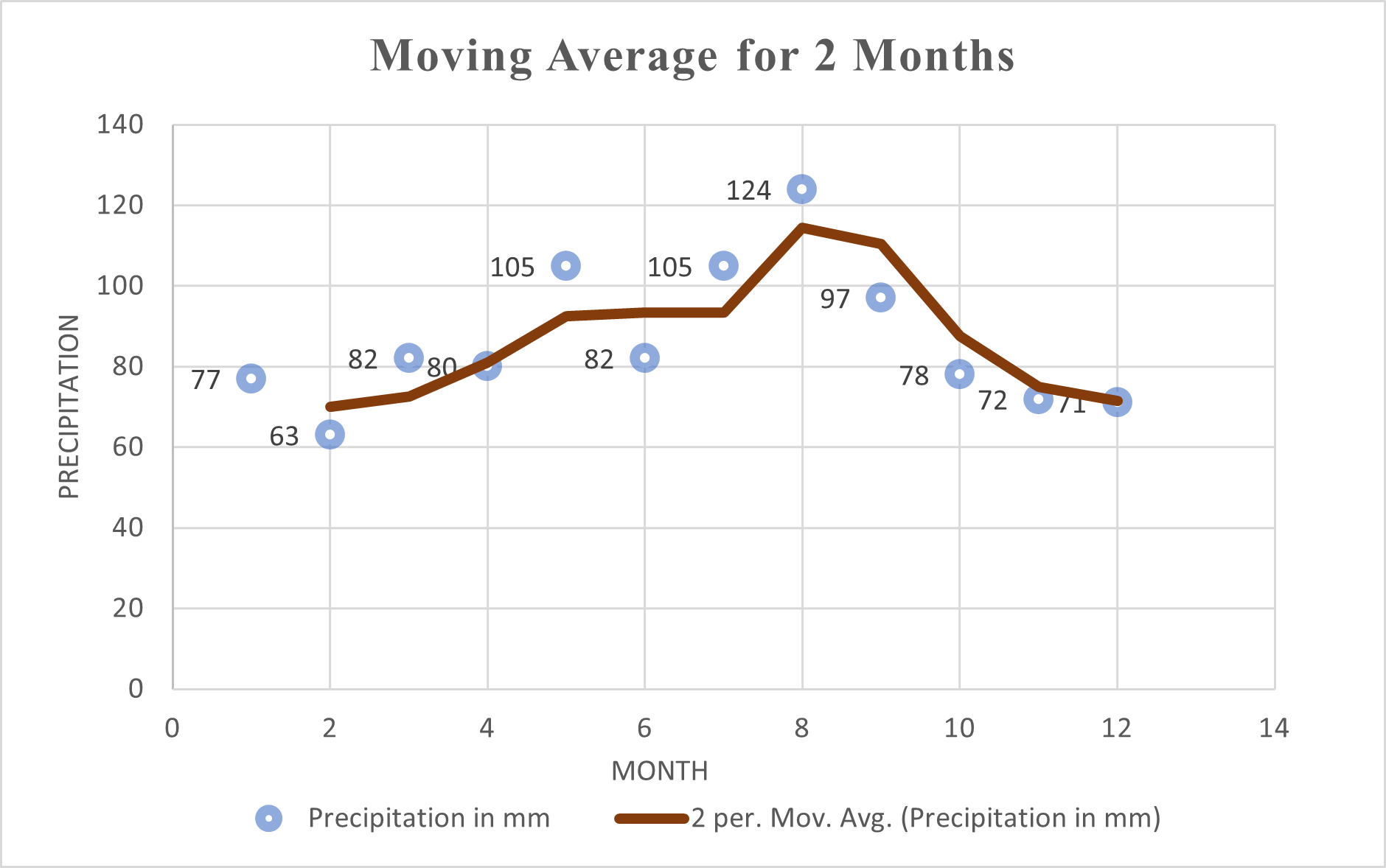 It is an interesting fact that we can generate a simple moving average line in the chart without the calculation process using a formula.

Also, the previous one is an example of a simple moving average, but in this section, you’ll learn an interesting thing: adding a second moving average line.

Before that, let’s see the process of adding a 3-months moving average line.

For making a moving average line for 3-months, follow the steps below.

⇒Pick More options from the Trendline element by moving your cursor on the element. 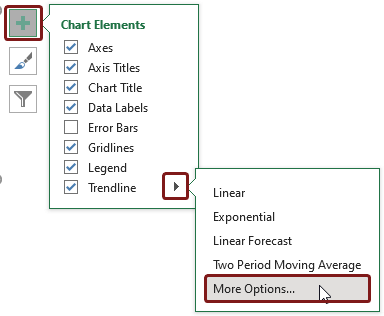 ⇒You’ll see a Format Trendline toolbar on the right side of Excel. 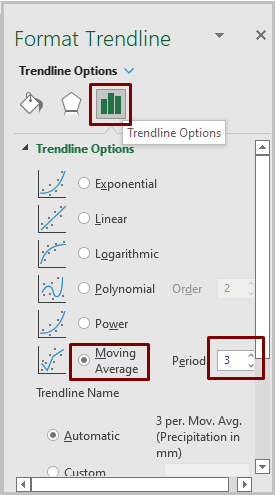 Or if you want you may click on the 2-months moving average line, you’ll discover the above Format Trendline toolbar in the same place. Then fix the period as 3. 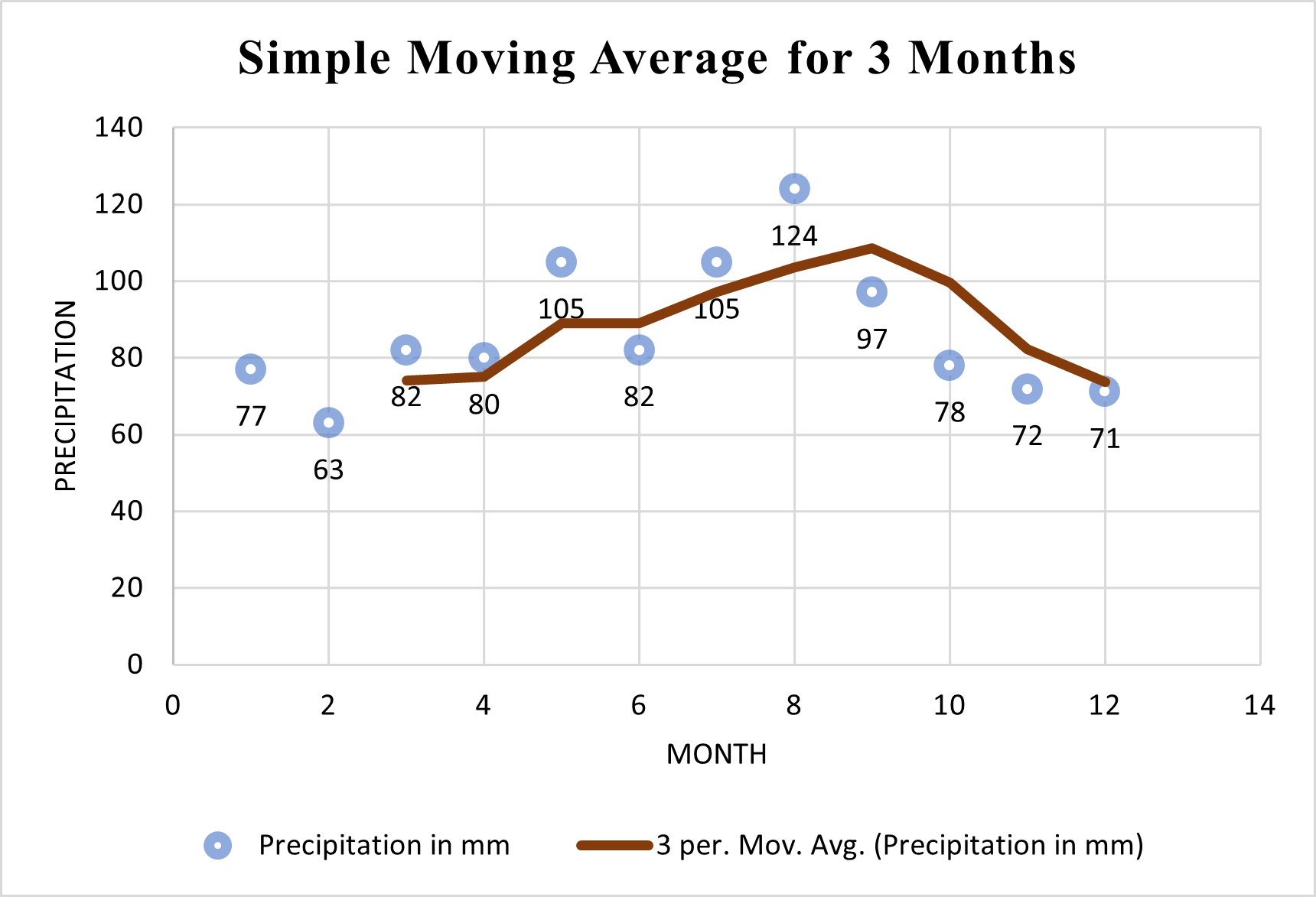 You have to follow a similar process to add a second simple moving average line like the before indeed. Simply choose the period as 5. 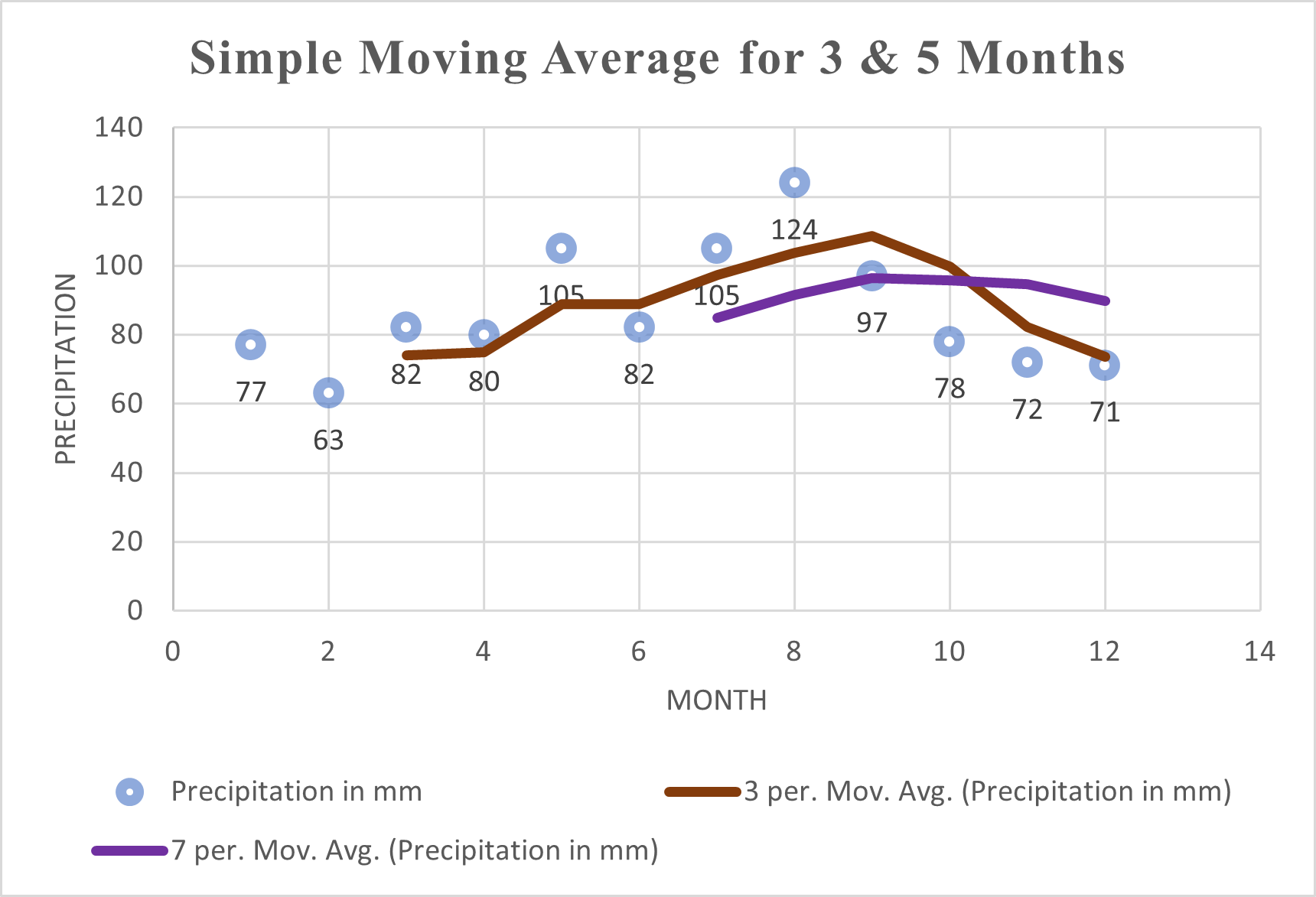 Since you are aware that the weightage factor is compulsory in creating the weighted moving average line in the Excel chart.

So the formula will be- 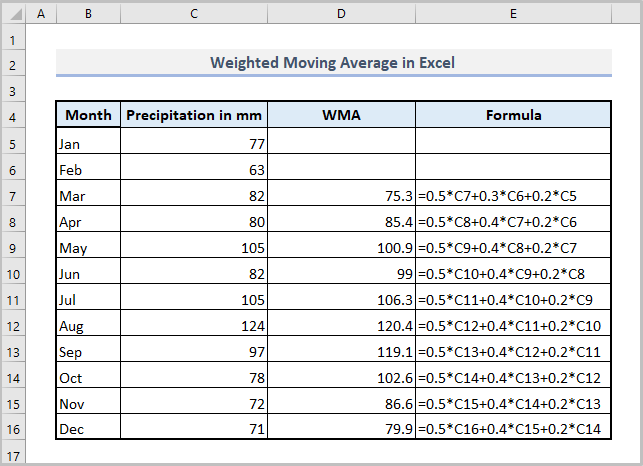 If you select “Month”, “Precipitation in mm”, and “WMA” fields, and then insert line chart. As you are fully conscious that the process of generating a chart has been discussed at the beginning of this article.

Lastly, the output will be as follows. 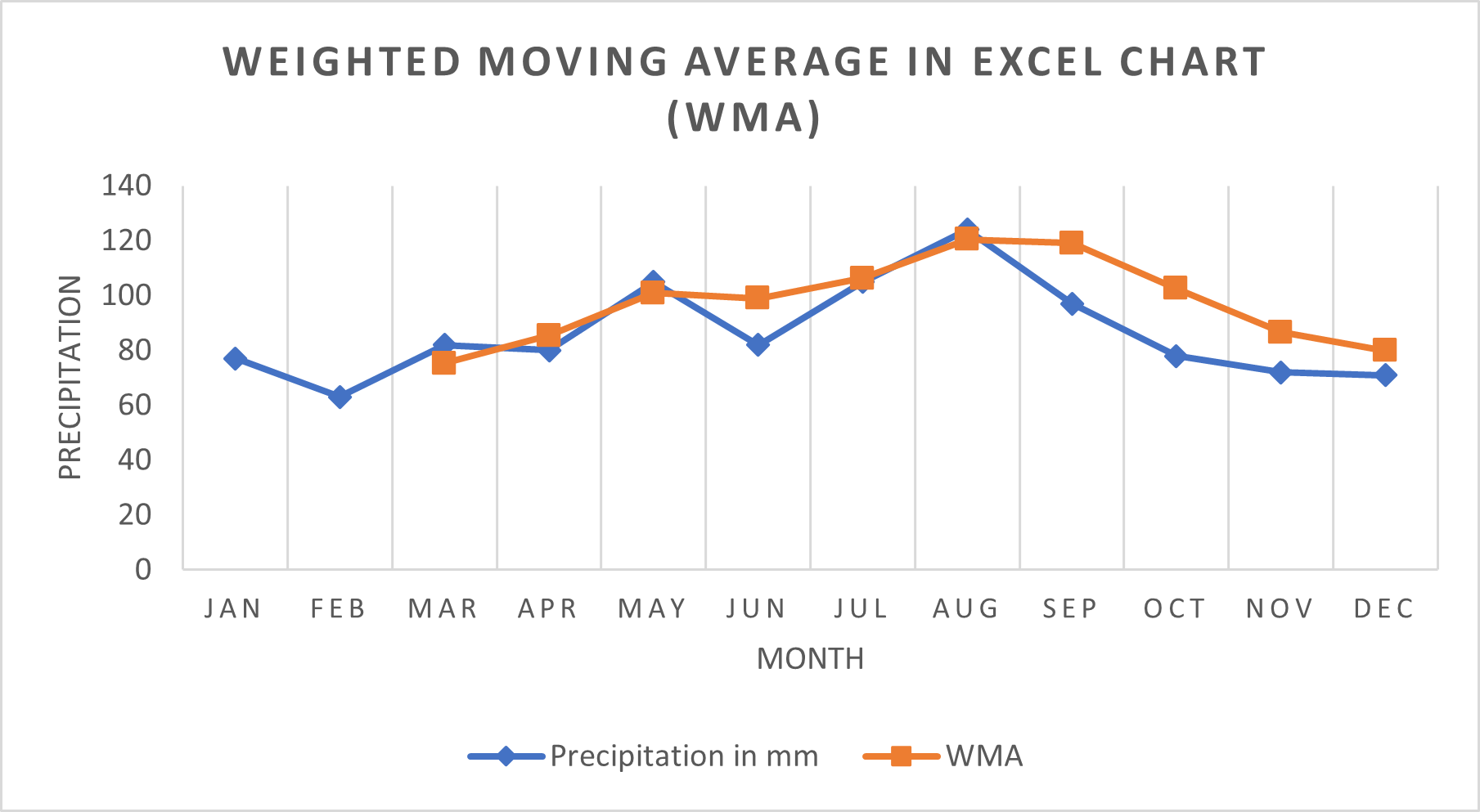 Not to mention that is our last example. Though the method of generating exponential moving average line is a little bit complex, it will be easier if you understand some concepts and the following formula.

α (Alpha) denotes the smoothing factor which can be calculated using the formula below.

Here, N is the value of the period.

I would like to mention that if the value of α  is higher, the line will be less smooth.

Here, H6 is the value of α where $ (dollar sign) is used as it is fixed

C6 is is the precipitation of February (actual observation)

D7 is the simple moving average for 3-months. 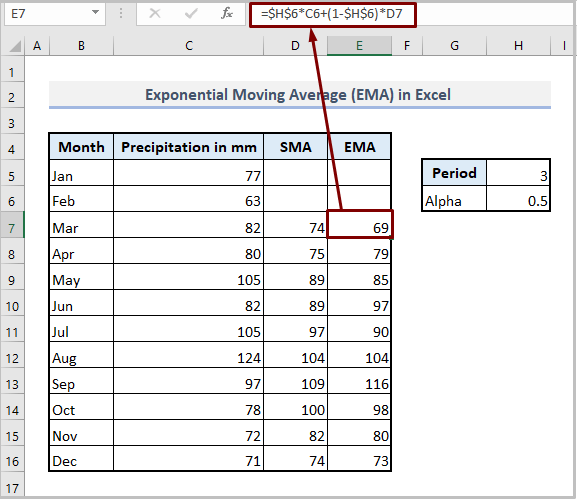 At this moment, if you select the precipitation, SMA, and EMA fields and insert the line chart, you’ll see the following output.

Read More: How to Calculate Exponential Moving Average in Excel

1. Be careful when selecting the cell for getting output as the period is related to this. For example, if you want to calculate a simple moving average line for 3-months, you have to blank above two cells.

This is how you may calculate the moving average in an Excel chart. I hope that this article will accelerate your Excel learning. If you have any queries or suggestions, please let me know in the comments section below.

How to Top Align in Excel (4 Quick Methods)

How to Create Barcode Using 3 of 9 Font in Excel

[Solved] Barcode Scanner Not Going to Next Line in Excel