6 Methods to Merge Multiple Cells without Losing Data in Excel

In this method, I will show you the application Excel Clipboard to join multiple cells. Suppose I have a dataset containing several people’s first names and last names. Now I will combine these names following the below steps. 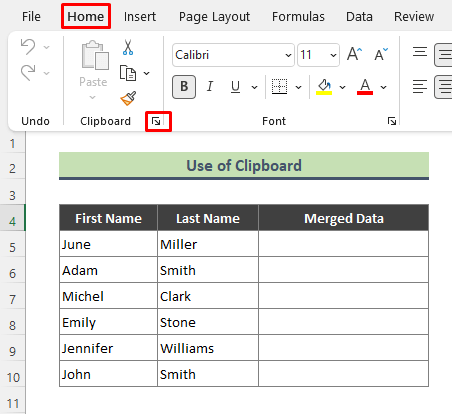 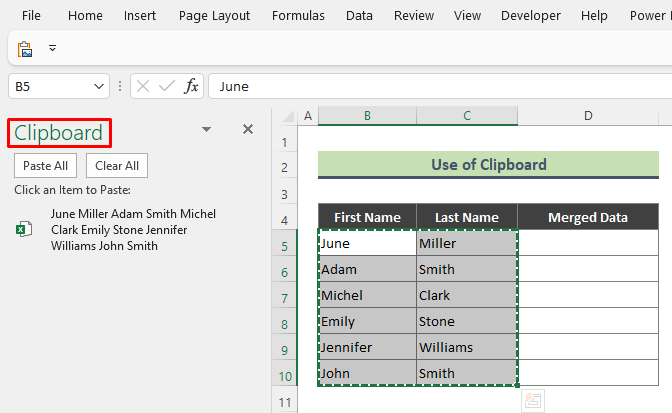 Read More: How to Merge Cells in Excel Table (7 Ways)

2. Use Notepad to Combine Multiple Cells and Avoid Data Losing in Excel

We can join multiple cells without losing data using a notepad. Similar to the previous method, I will merge several cells containing first and last names. 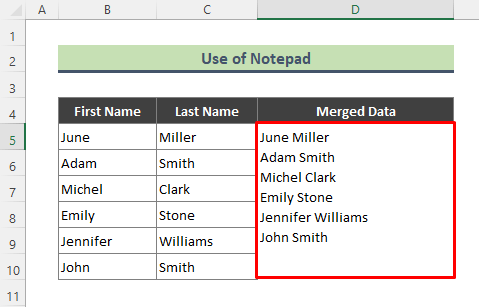 Read More: How to Merge Multiple Cells in Excel at Once (3 Quick Ways)

Now, I will use an excel formula to join multiple cells without losing data. While writing the formula, the ampersand (&) operator will be used to concatenate data from different cells. Let’s assume we have a dataset (B5:D10) containing several people’s names,  residing cities, and professions. Now, I will combine these cells following the below instructions. 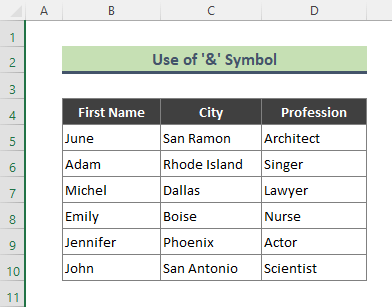 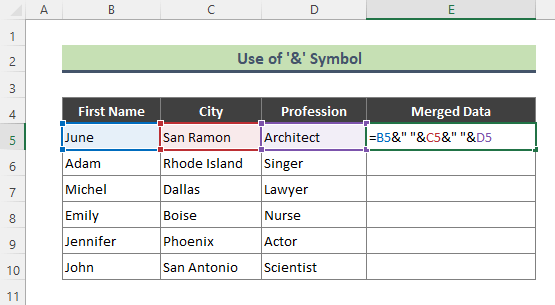 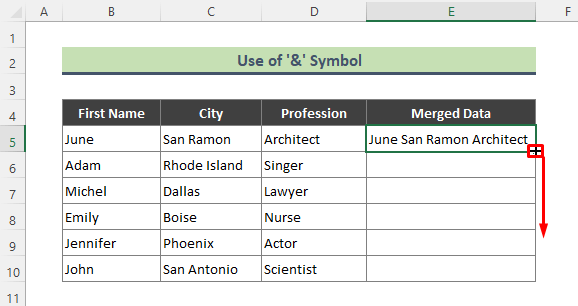 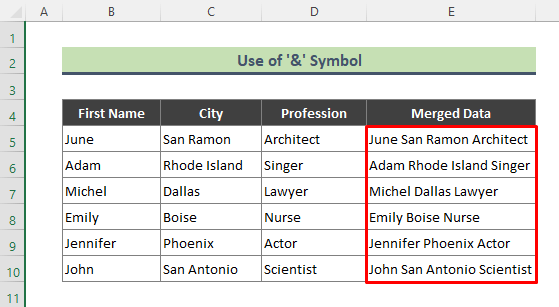 Read More: How to Merge Cells in Excel Vertically Without Losing Data

In this method, I will use the CONCAT function to join several cells without losing data. We will apply the function to the similar dataset that was used in the previous method. 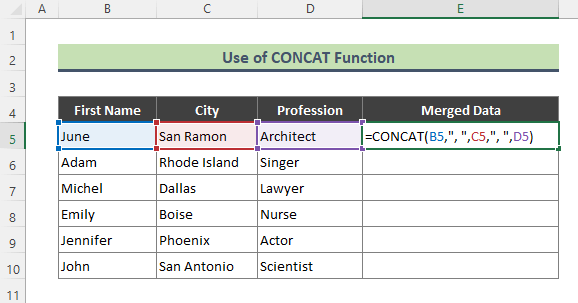 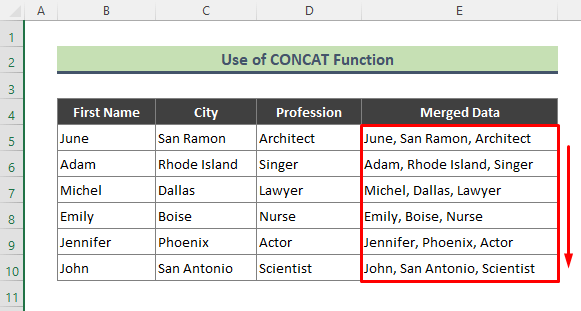 Here the CONCAT function concatenates the range B5:D5, separated by a delimiter and space.

Read More: How to Merge Two Cells in Excel without Losing Any Data

We can use the CONCATENATE function in excel to join multiple cells without losing data. 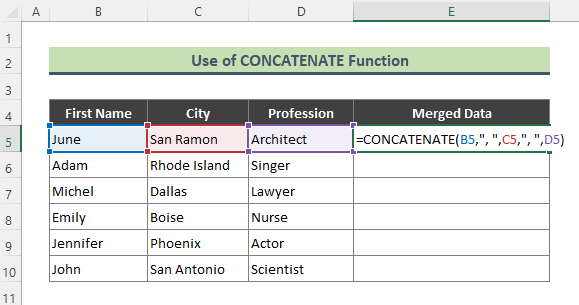 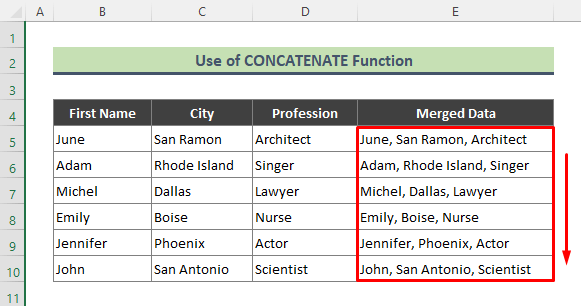 Here the CONCATENATE function joins text strings from several cells (B5, C5 & D5)  and converts them into one text string as shown in the above screenshot.

Read More: How to Merge Text from Two Cells in Excel (7 Methods)

Now, we will use the TEXTJOIN function in excel to combine multiple cells without losing data. 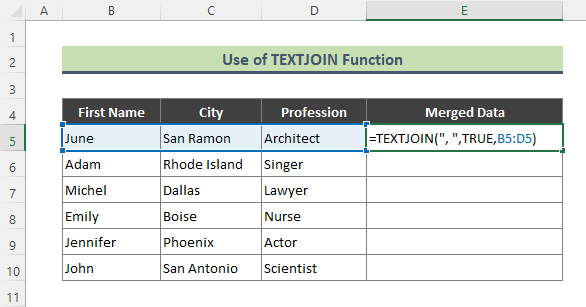 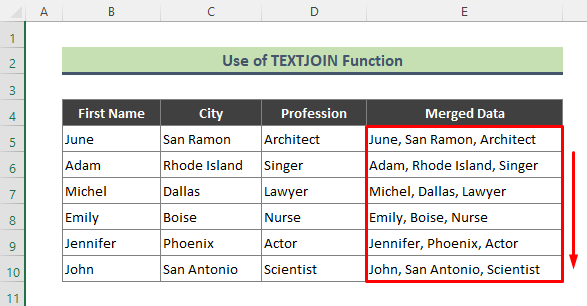 Read More: How to Merge Text from Two or More Cells into One Cell (Easiest 6 ways)

Can You Merge Multiple Cells with Merge & Center Feature?

You can try to merge several cells using the Merge & Center feature in excel. Unfortunately, this method has a limitation. While combining multiple cells, this feature only keeps data from the leftmost cell only. For instance, from the below dataset I want to combine the first name, last name, and profession. 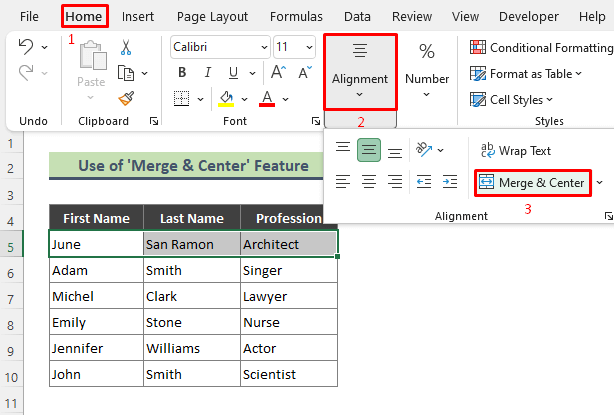 However, applying Merge & Center to selected cells returns the below warning which says merging these cells will keep data from the leftmost cells only. 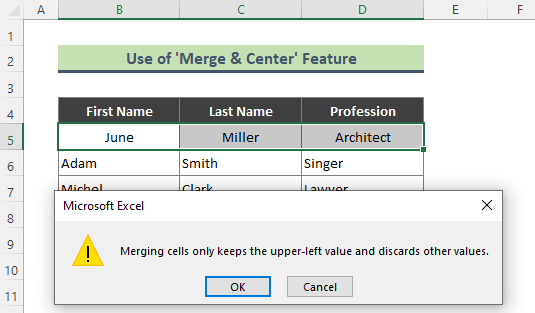 So, if we use the Merge & Center feature to combine multiple cells, we will lose data. To avoid this limitation, you can use the above-mentioned 6 methods to merge multiple cells.

Read More: How to Merge and Center Cells in Excel (3 Easy Methods)

In the above article, I have tried to discuss several methods to merge multiple cells without losing data in excel elaborately. Hopefully, these methods and explanations will be enough to solve your problems. Please let me know if you have any queries.

How to Truncate Numbers in Excel (8 Suitable Methods)

How to Find Combinations Without Repetition in Excel

Units of Production Depreciation Method with Formula in Excel