How to Use TIMEVALUE Function in Excel (4 Examples) 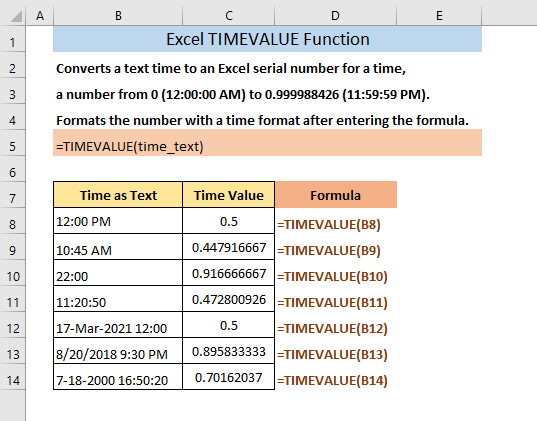 The image above gives an overview of the TIMEVALUE function. You will get to know more about the function throughout the article.

Introduction to The TIMEVALUE Function

The TIMEVALUE function returns a decimal number between 0 to 0.999988426 based on the input time which is represented by a text string.

This function was first introduced in EXCEL 2000. This function has been available in all versions of Excel since 2000.

4 Examples of Using The TIMEVALUE Function in Excel

Now we will see some examples of using the TIMEVALUE function which will help you to understand the function more clearly.

1. TIMEVALUE Function to Obtain The Decimal Value of a Time Text

Here, the function will give the decimal value of the time text of cell B5. 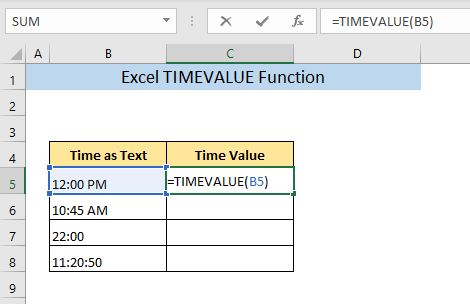 As a result, you will get the decimal value of the time text of cell B5. 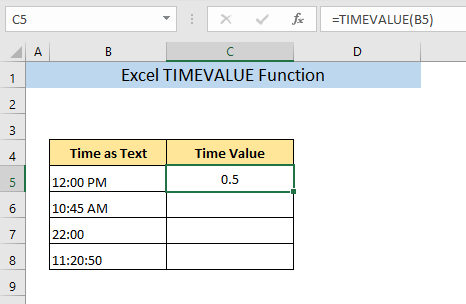 In a similar way, you can convert time text which represents the time in any other format to a decimal value. 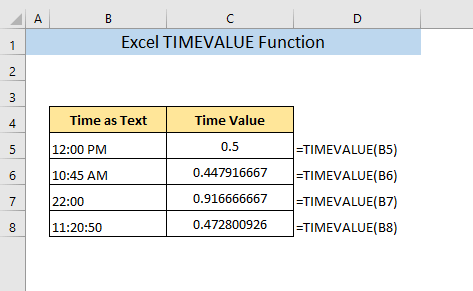 2. Get The Decimal Value of a Time from a Date with Time

➤ Type the following formula in an empty cell (C5),

The function will ignore the date part of the text of the cell B5 and give the decimal value only for the time part of that text. 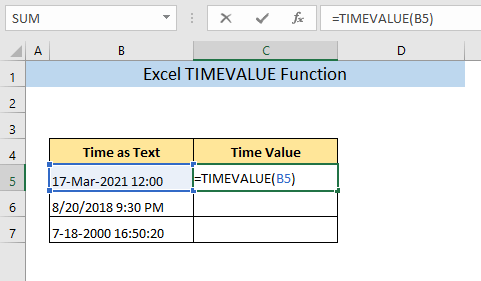 As a result, you will get the decimal value in cell C5 of the text which is representing both the date and time. 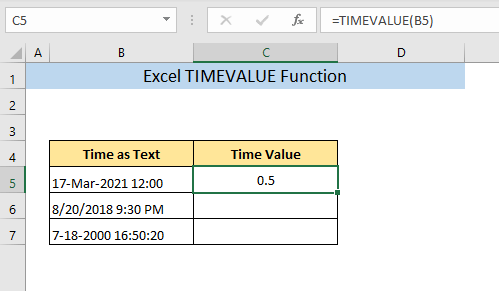 In a similar manner, you can convert time text which represents both date and time in any other format to a decimal value.

Read More: How to Remove Time from Date in Excel (6 Approaches)

3. Using TIMEVALUE Function in a Calculation

In this example, we will learn how we can use the TIMEVALUE function in a calculation of a real life scenario. Suppose, we have a dataset where entry time and leave time of the employees of a company are given. If an employee works for 8 hours, it is considered a full day of work. Now we will use the time function to determine what portion of a full day’s work is done by different employees.

Here, the TIMEVALUE function converts the times of cells C5 and D5 to their decimal values. By subtracting the two values we get the difference between the entry time and leave time. The TIMEVALUE function considers 24 hours to a full part. (24/8) portion converts the full part into 8 hours. So, if any employee works for 8 hours, the formula will return a value of 1. 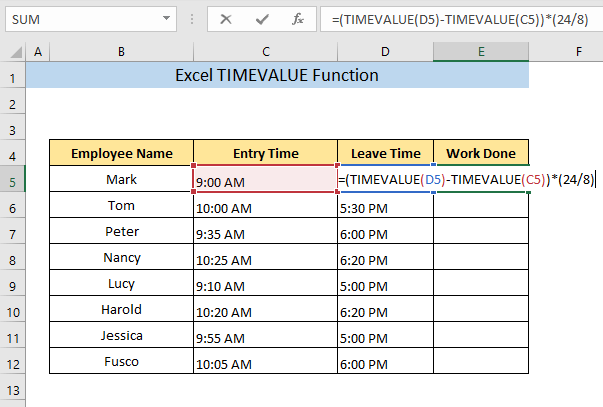 As a result, you will get the fraction of the full day’s work done by the employee (Mark) in cell E5. 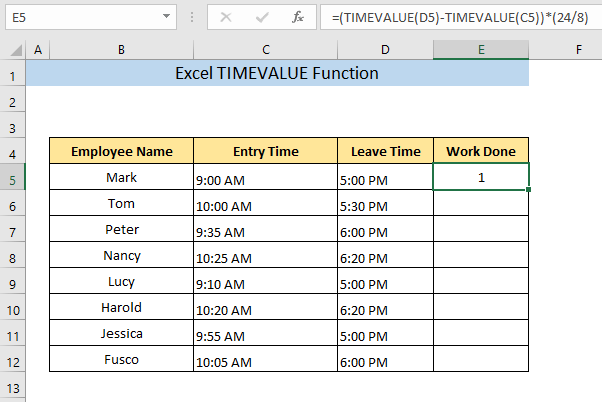 ➤ Drag the cell E5 to apply the same formula for all other employees.

As a result, you will get what portion of a full day’s work is done by all of the employees. 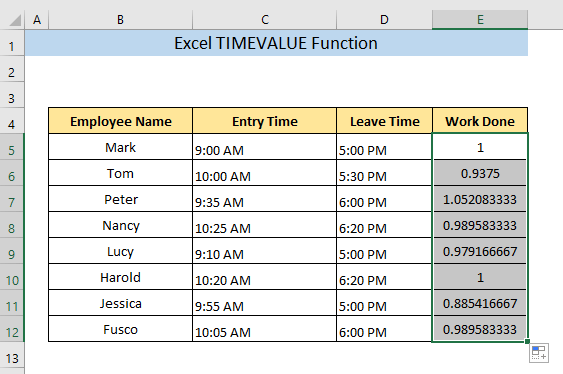 Read More: How to Auto-Update Current Time in Excel (With Formula and VBA) 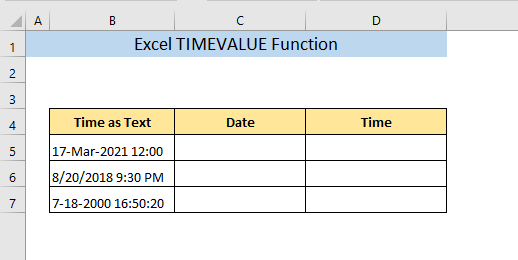 To get the date part,

➤ Type the following formula in C5,

The LEFT function will return the first 11 characters from the text B5 and the DATEVALUE function converts it into a date,

➤ Press ENTER and select Date as the cell format.

As a result, you will see that the date part of the text B5 has been shown in cell C5 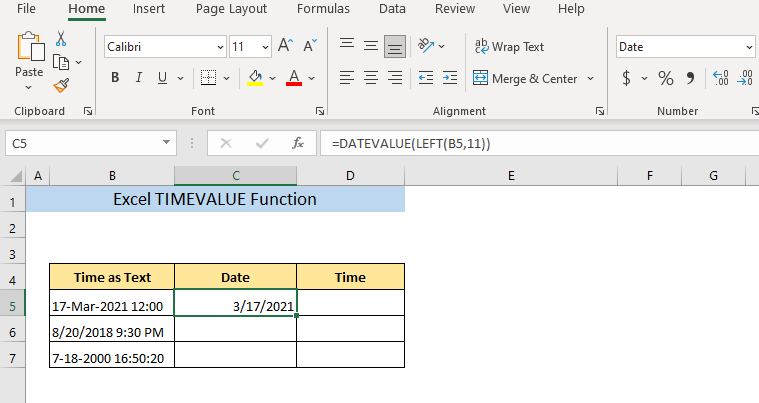 Now to get the time part,

➤ Type the following formula in D5,

The MID function will return the 5 characters starting from the 13th position in the text B5 and the TIMEVALUE function converts it into a time,

➤ Press ENTER and select Time as the cell format.

As a result, you will see that the time part of the text B5 has been inserted in cell C5 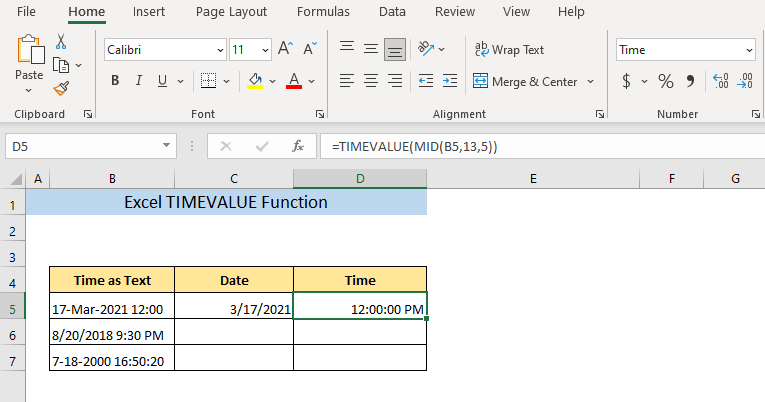 In a similar manner, you can separate the date and the time of all formats from the text.

Read More: How to Use DATE Function in Excel (8 Examples)

Though you can convert time format into text format using the TEXT function and then apply the TIMEVALUE function.

I hope now you know what the TIMEVALUE function is and how to use it in Excel. If you have any confusion please feel free to leave a comment.