How to Use Excel NORMDIST Function (2 Applications)

In this article, we will get familiar with the Excel NORMDIST function. We can use this function in statistics as well as hypothesis testing. We will go over two applications of this function.

NORMDIST function returns normal distribution for Mean and Standard deviation. In statistics, this function can be used for a variety of things, including hypothesis testing.

Returns the normal distribution from the specified mean and standard deviation.

2 Applications of NORMDIST Function in Excel

First and foremost we will introduce the dataset that we will use for this article. In this case, we have a dataset of share prices and their corresponding Normal Distribution value. Moreover, we have the mean and standard deviation of the share price. The dataset is given in the image below: 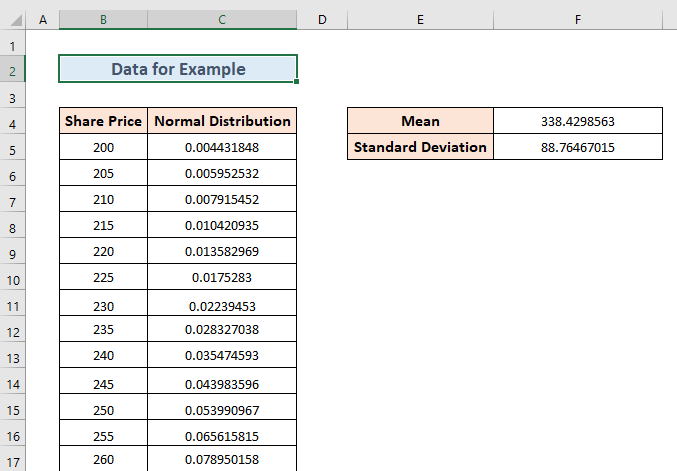 Therefore, if we plot a graph of Share Price against Normal Distribution, the graph will look like the following figure. 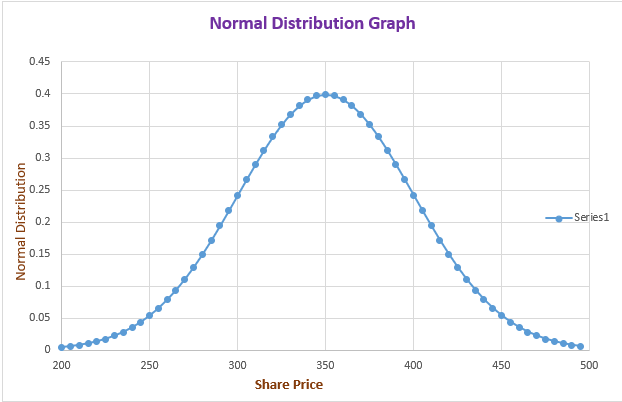 1. Use of NORMDIST Function to Calculate the Cumulative Distribution of a Dataset 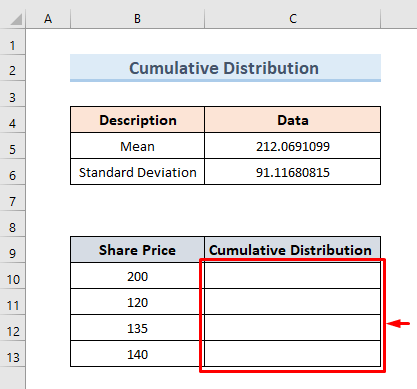 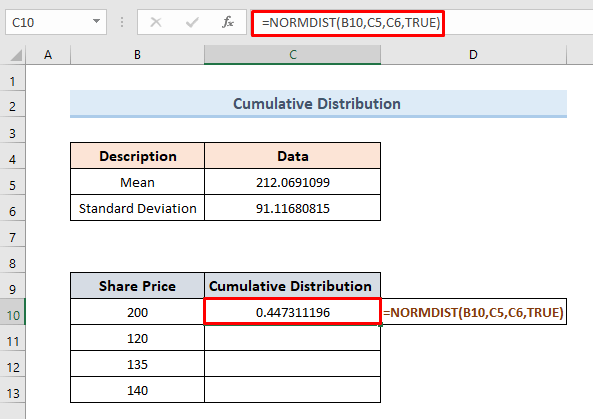 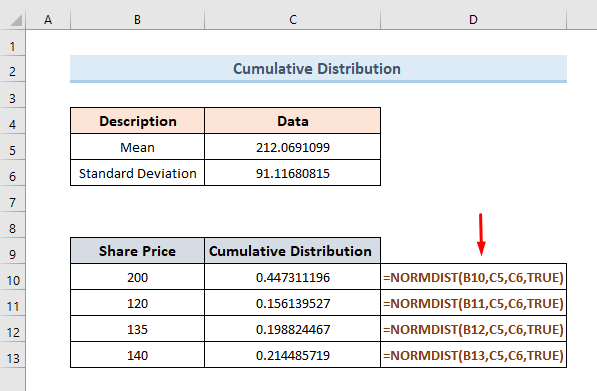 1.1 Smaller Than a Particular Value

Now, let us just think we want to calculate a cumulative distribution for the values less than 250. Let’s see how we can do this:

1.2 Between the Range of Two Values

In this example, we will calculate cumulative distribution between the range 250 to 400. Just do the following steps:

1.3 Greater Than a Particular Value

In this case, we will calculate the cumulative distribution for the values greater than 400. Let’s see how can we do this:

Here, this formula subtracts the value of the cumulative distribution of cell C7 from 1.

Read More: The Different Ways of Counting in Excel

For this example, we will consider the syntax of the NORMDIST function for Cumulative Distribution. Then put the cumulative argument value FALSE in place of TRUE. As a result, we will get the probability mass function for the data.

In this example, we will calculate the probability mass function for the first four values of the share price of our example data. Just follow the simple steps to do this. 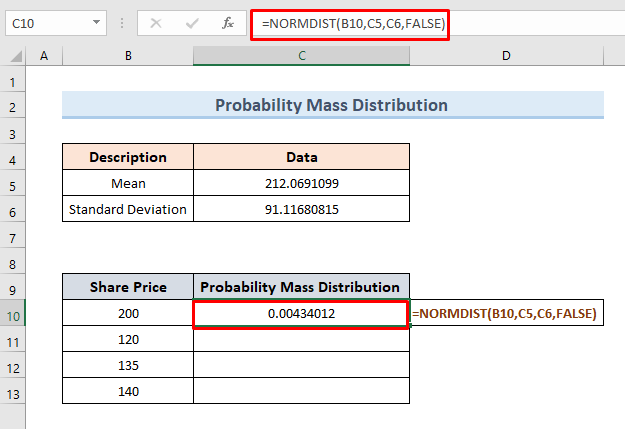 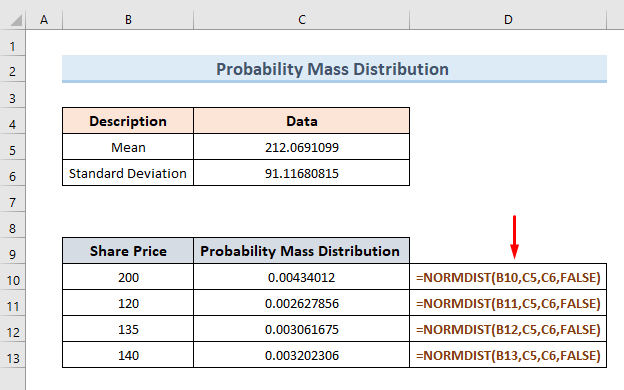 While using the NORMDIST function, we can experience the following two kinds of errors.

If the Standard Deviation is blank, less than or equal to zero, the NORMDIST function returns ‘#NUM! Error’. Let’s see with examples:

In the formula, we will keep the Standard Deviation argument Blank. 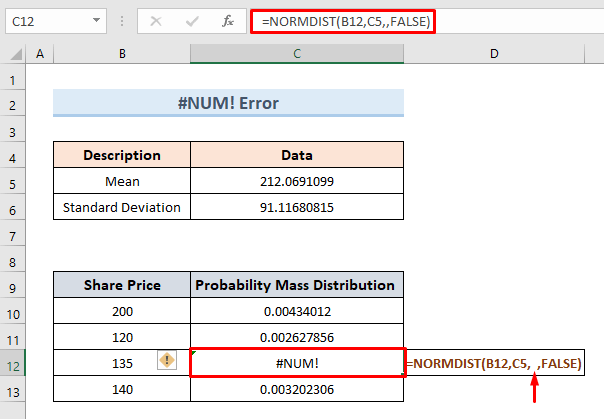 If any of the supplied inputs is a non-numeric value, the NORMDIST function produces a “#VALUE! error. Let’s see an example of this with the following dataset that we used previously for calculating Probability Mass Distribution.

We will use a Text Character in the place of the Standard Deviation argument. 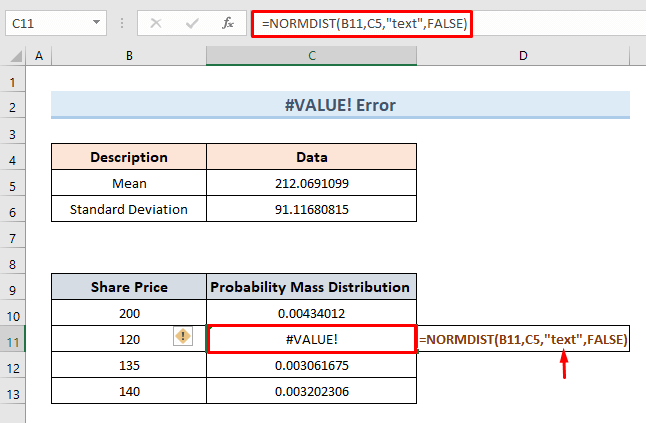 In the end, in this article, we have tried to make clear the concept of NORMDIST function to you. For a better experience download our practice workbook added to this article and practice yourself. If you feel any confusion just leave a comment in the below box.

Hi there! I am Mukesh Dipto. I graduated with a bachelor's degree in engineering. Currently, I am working as a technical content writer in ExcelDemy. You will find all my articles on Microsoft Excel on this site. Outside of the workplace, my hobbies and interests include sports and meeting new people. I also enjoy sports. My favorite sports are football (to watch and play) and Badminton (play).