Often, we come across instances where we need to SUMIFS: sum a range across multiple columns. In this article, we use functions such as SUM, SUMIF, SUMIFS, and SUMPRODUCT, as well as the combination of SUMPRODUCT, ISNUMBER, and SEARCH functions. For the demonstration of the methods, we have a dataset of product sales for different months. Furthermore, we want to know the total number of sales for a specific product over the course of the month. The following image shows an overview of the methods. 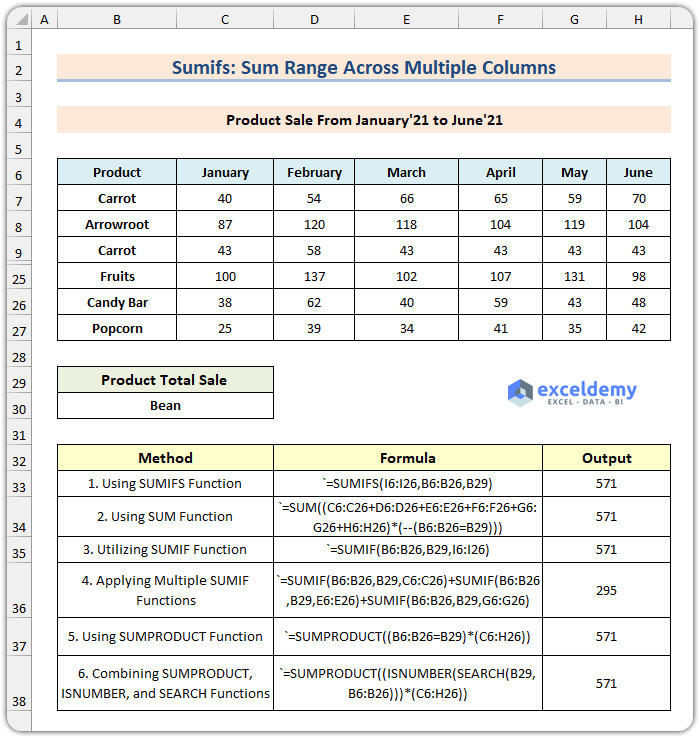 You can download the Excel file from the link below.

The nature of the SUMIFS function is that it can only sum one column depending on criteria that are sitting in multiple columns. Therefore, we have to add a helper column to sum range of multiple columns. 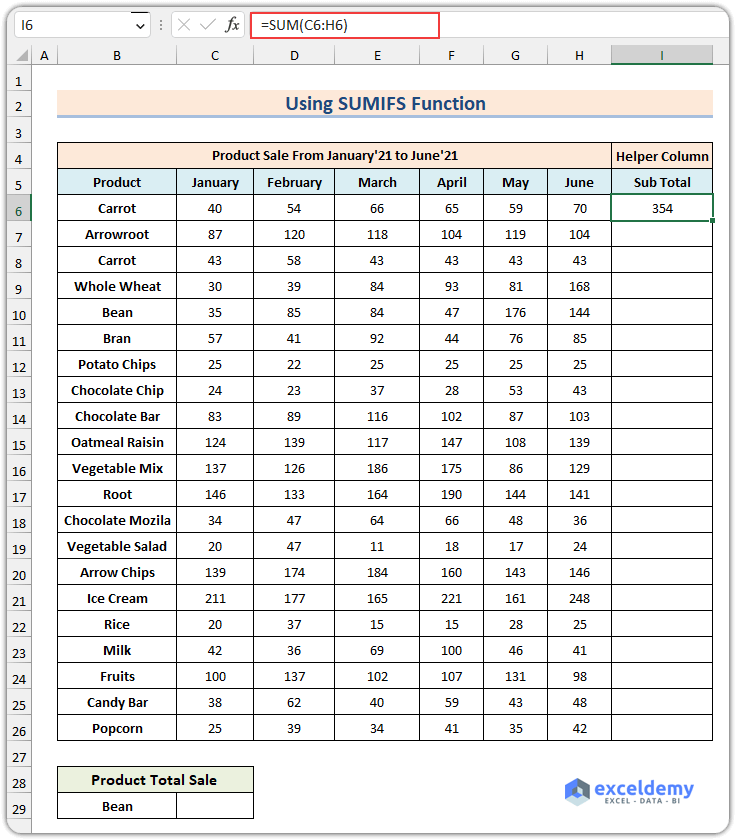 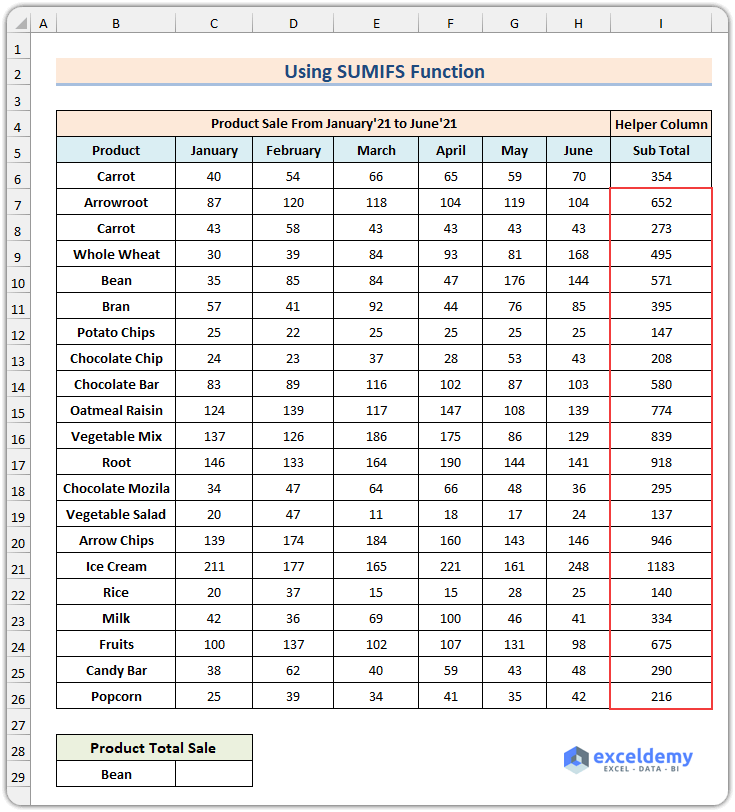 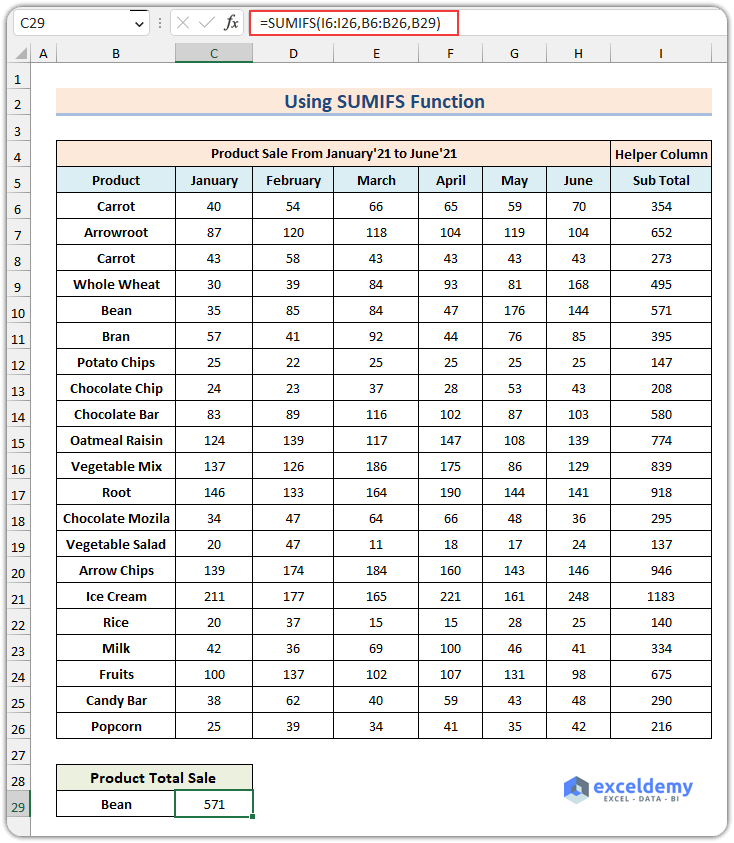 In this section, we will have to modify the SUM function as an array function to achieve the objective of this article. 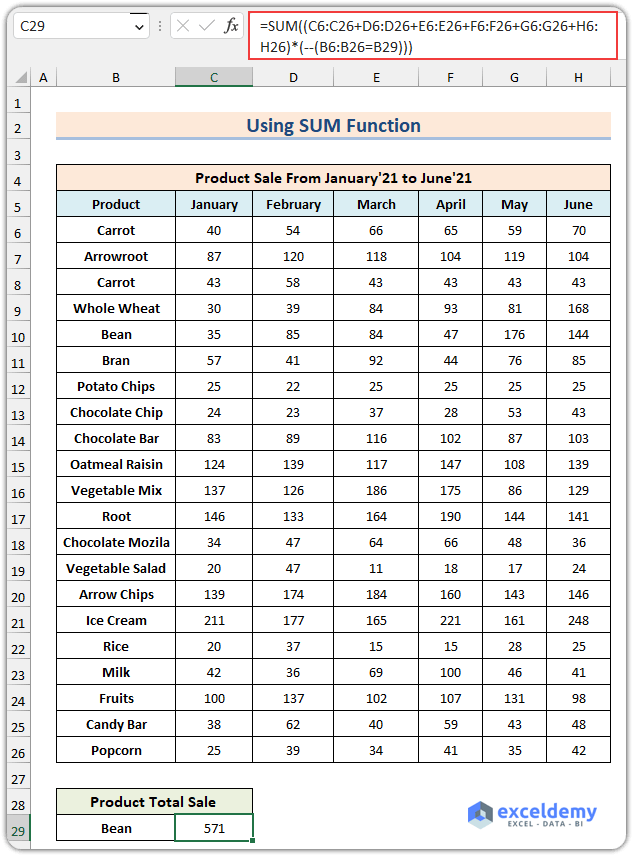 Read More: How to Use VBA Sumifs with Multiple Criteria in Same Column

As we know from earlier, the SUMIF function does not allow summing ranges from multiple columns at once. But we can use a helper column to execute what we need. 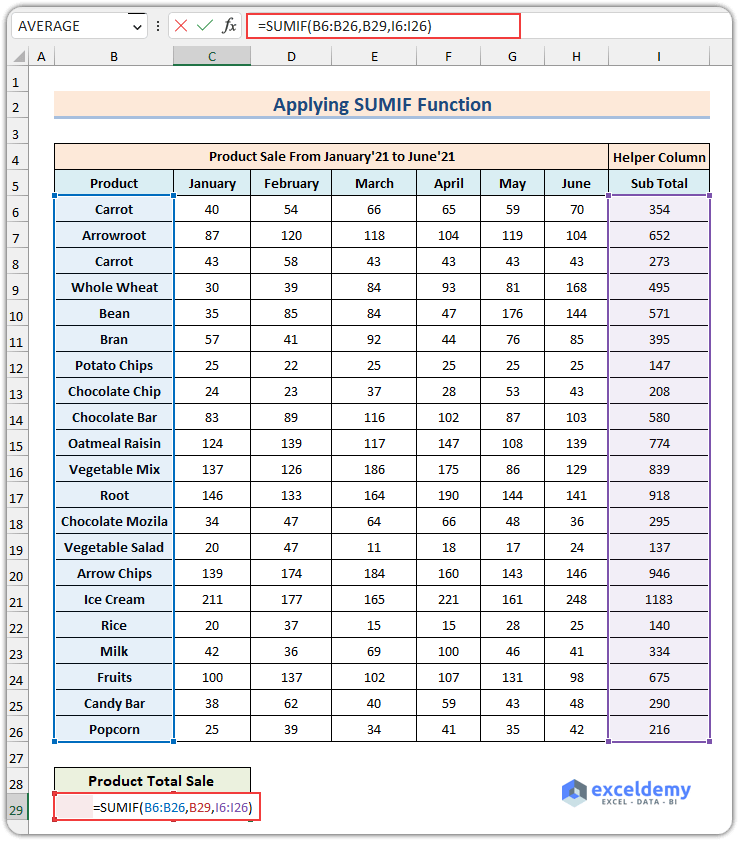 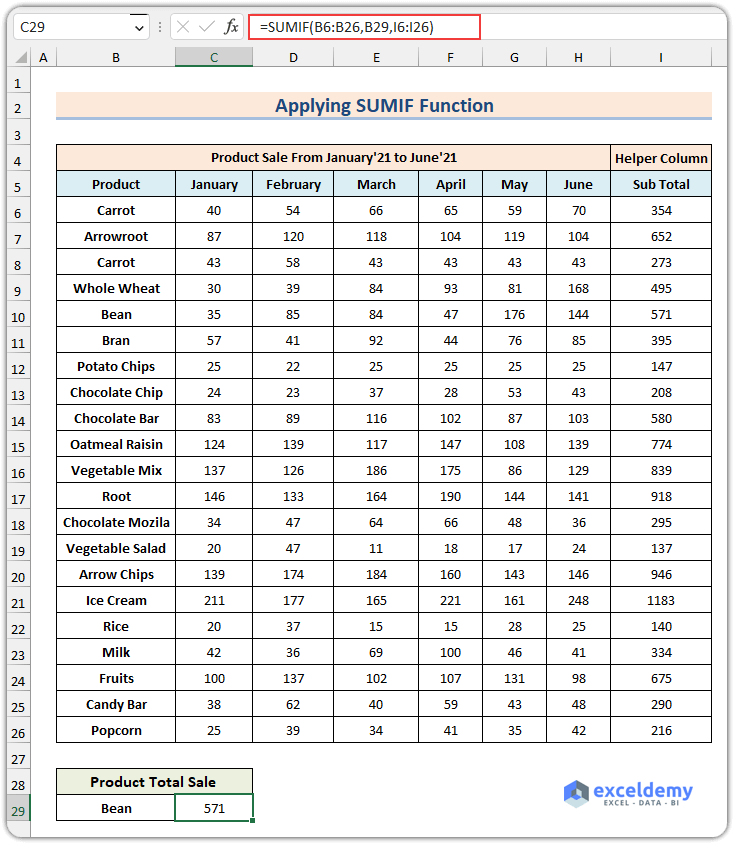 Read More: How to Use SUMIFS Formula with Multiple Criteria in Excel (11 Ways)

Another way to use the SUMIF function is to individually sum one range at a time. This could be hideous work, but if you have a few columns to execute, you can apply it. As we know the syntax of the SUMIF function, we have to sum individual columns, applying the criteria every time. Let’s say we want to sum the product sales in random months such as January, March, and May. 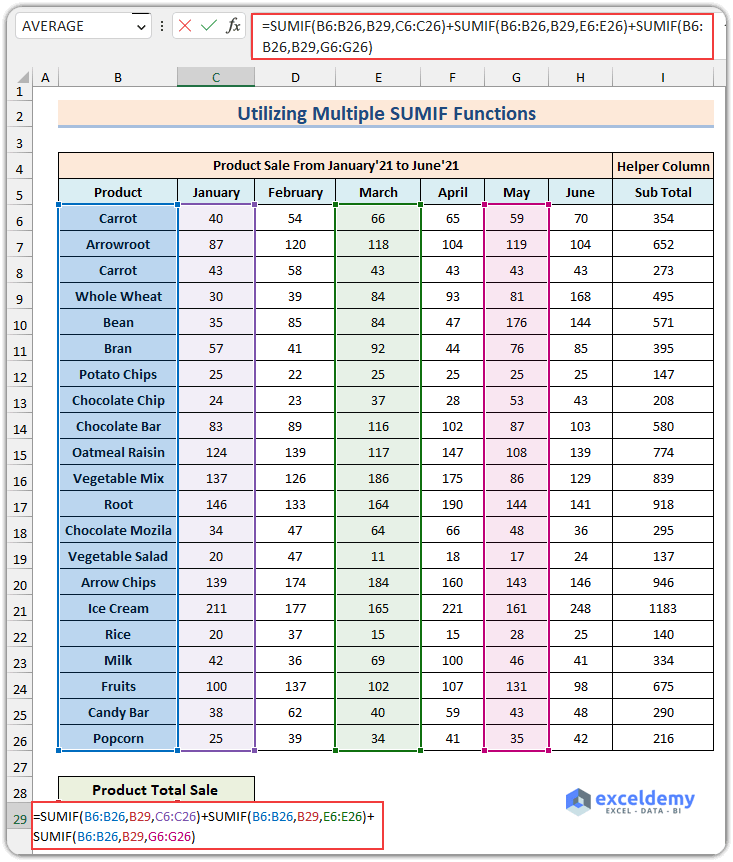 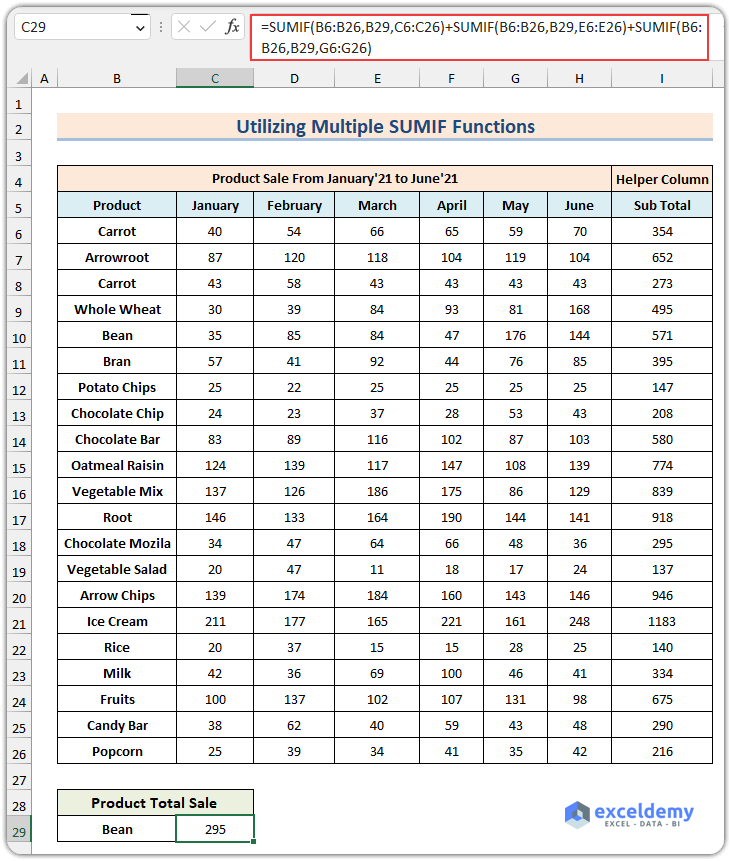 Since we want the sum of the total sales of a particular product, we can use the product name as a ”text” reference. And the formula will show the sum from the sum_range. 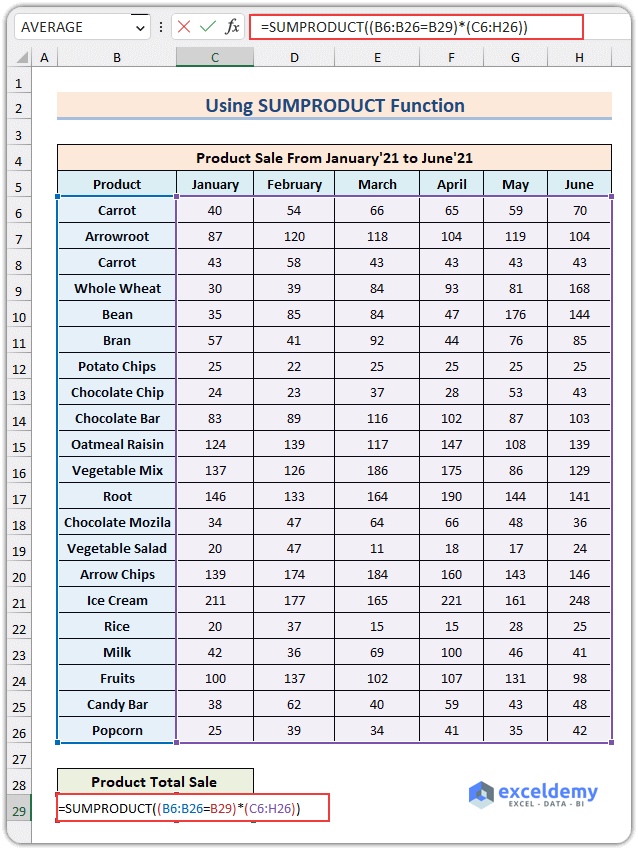 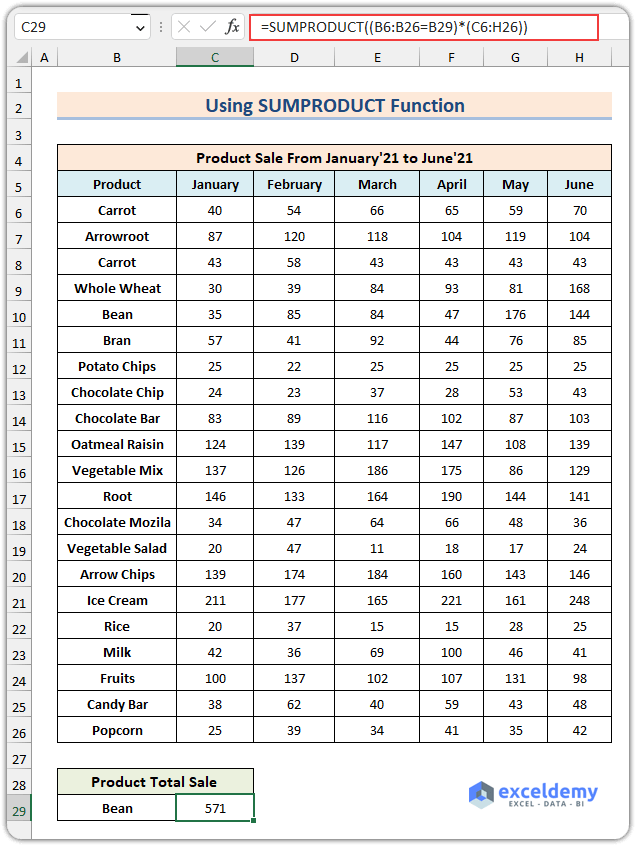 Read More: How to Use SUMIFS When Cells Are Not Equal to Multiple Text

Sometimes, product names have special characters in them. These characters get input from incautious users. In that scenario, we can use a combination of SUMPRODUCT, ISNUMBER, and SEARCH to count the total sale of any product. 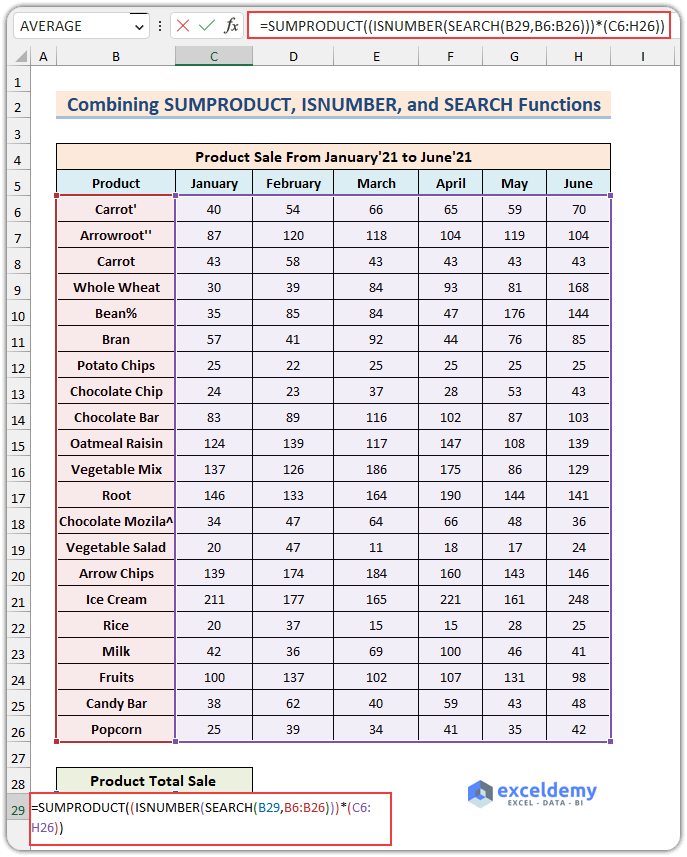 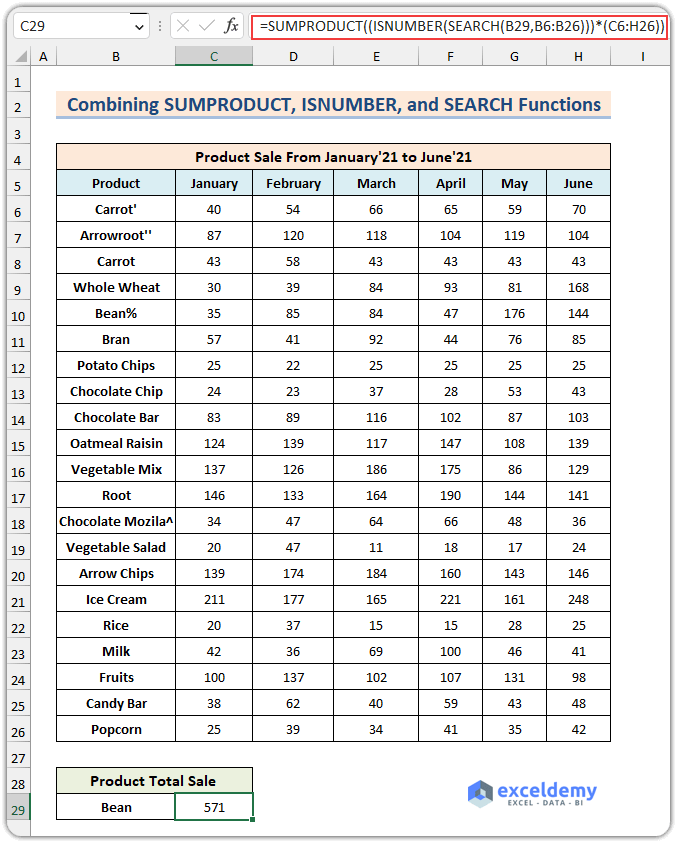 The SUM, SUMIF, and SUMIFS functions sum a range in multiple columns with some modifications in the formulas in Excel. The SUMPRODUCT function does the job with ease after we add criteria to the formula. The combination of the SUMPRODUCT, ISNUMBER, and SEARCH functions can sum the total sale despite special characters existing in the product names. I hope you find the discussed methods lucid enough to follow. And comment, if you need further clarifications or have something to add.