If you’re a regular follower of my blog, you know that I have started writing a series of articles on Excel Array Formula. In the first article, I have demonstrated what are arrays in Excel and how to work (enter into a worksheet, edit) with them?

Read the first article here: Excel Array Formula Basic – What is an Array in Excel?

Find out the average of positive numbers with an array formula

In this worksheet, you see there are some numbers on the left side of the worksheet. 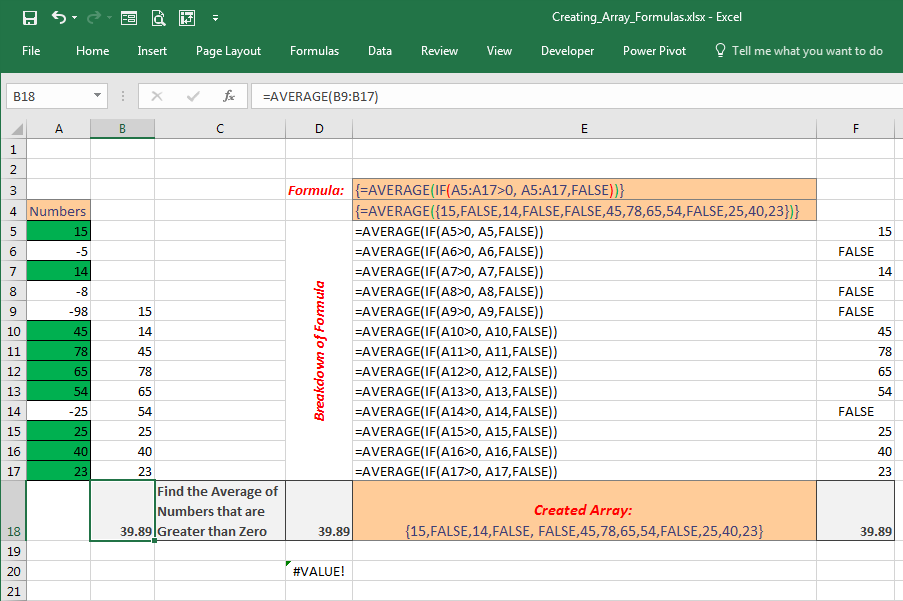 You see I have used the average function to find out the average of this separate range (Cell B18 is selected and look at the formula bar of the above image).

Let’s do the same thing with an array formula

The other way is: we can use an Array Formula.

You can apply the array formula directly on the first range (from cell A5 to A17).

To make you understand easily, I have copied the same formula in cell E3:

Closer look at the formula

You know this curly bracket is applied on an array formula automatically by Excel when you press CTRL SHIFT and ENTER keys simultaneously on your keyboard.

The main focus is now on the first argument and the second argument.

You see the first argument is a range, and the second argument is also a range. And the whole formula is an array formula.

You cannot deal with this formula as a normal formula.

In cell D20, I have entered this formula as a regular formula, and you see the cell is showing an error value (#VALUE! error). 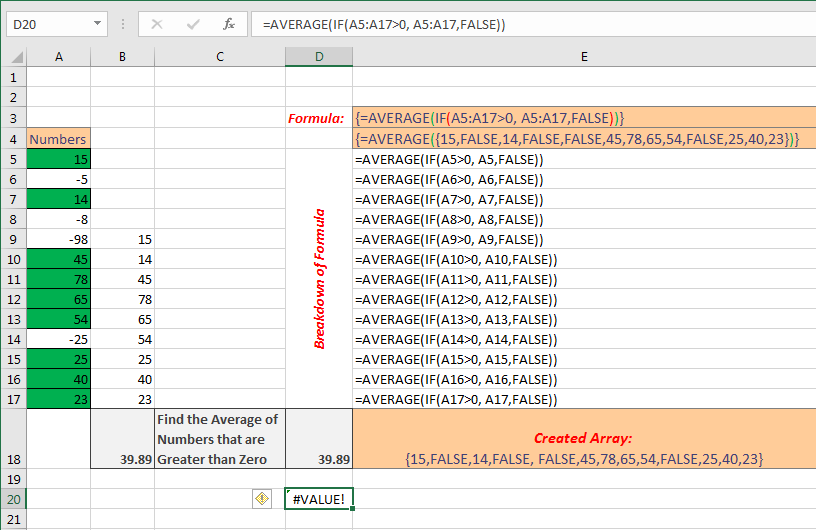 When you’re entering an array formula by pressing Enter button, it is showing an error.

The reason is IF function cannot work when you place a range as an argument. You are seeing two ranges are working as arguments in the IF Function. So it is showing the error.

We shall see now how Excel handles an array formula in step by step procedure.

Excel will break down these two ranges into single cells as shown in the following formulas. 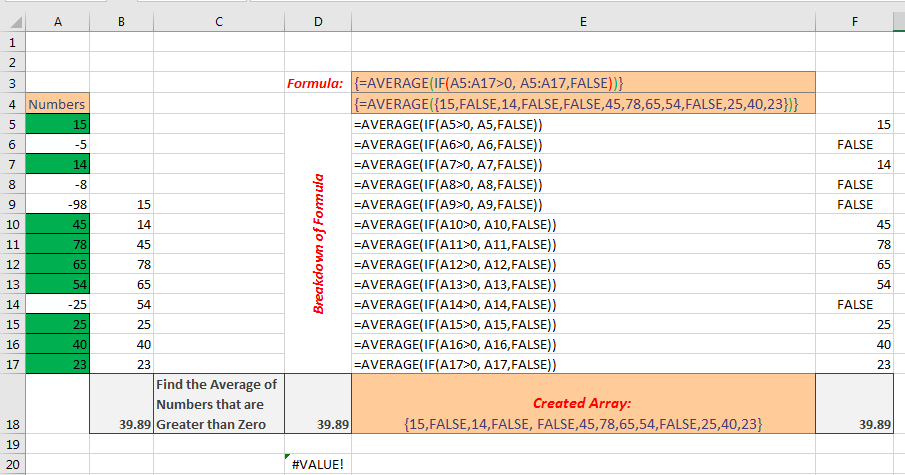 Observe the breakdown of the array formulas [click on the image to see a clear view].

The second breakdown returns False, as the value of cell A6 is negative 5, so, A6 is not greater than zero, it is false, so it returns the third argument; the third argument is False. So the second value of the internally created array is False (see the array in cell E3).

The IF function is totally replaced by the above Array. And the rest is simple. The AVERAGE function finds out the average of the values in the array, except the FALSE values, the False values are not numbers, so the AVERAGE Function neglects the FALSE values.

So this is how an array formula works. In this article, I have just introduced you to the Array Formulas.

In the next few articles, I will deal with array formulas with more examples and in more detail. Understanding array formula will reward you in many ways; you will be able to shorten a big regular formula into a small one and eventually becoming more professional in dealing with Excel formulas.

When you will enter the above formula into Excel as an Array formula, Excel will break down the formula in this way:

How to Calculate Annuity Factor in Excel (2 Easy Ways)

How to Calculate Annuity in Excel (5 Practical Examples)

How to Repeat Header Row When Scrolling in Excel (6 Ways)