How to Substitute Multiple Characters in Excel (6 Ways)

1. Use the SUBSTITUTE Function to Substitute Multiple Characters

The syntax of the Excel SUBSTITUTE Function is as follows:

Text – the original text in which you’d like to make changes.

Old_text – the characters you’d want to substitute off.

New_text – the new characters to use in place of old text

For instance, all of the formulas below substitute “1” with “2” in cell B5, but the results vary based on the number you provide in the last argument:

In the below screenshot, we have shown the example for the first occurrence. To do so, simply follow the steps.

As a result, you will obtain values for first, second, and all occurrences consecutively to substitute multiple characters in excel.

Note. Remember that the SUBSTITUTE Function is case-sensitive. Make sure to enter uppercase and lowercase perfectly. As you see in the below image, for lowercase excel could not find the values. So, no substitution occurred.

To do multiple substitutions, within a single formula, you can nest multiple SUBSTITUTE Functions. 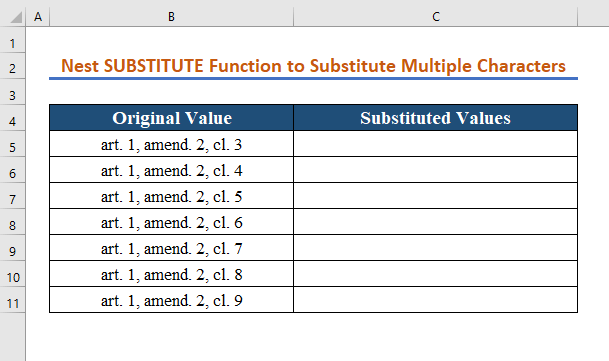 What you want is to substitute the three codes with full names. You may accomplish this by using three separate SUBSTITUTE formulae.

Then nest them one inside the other. 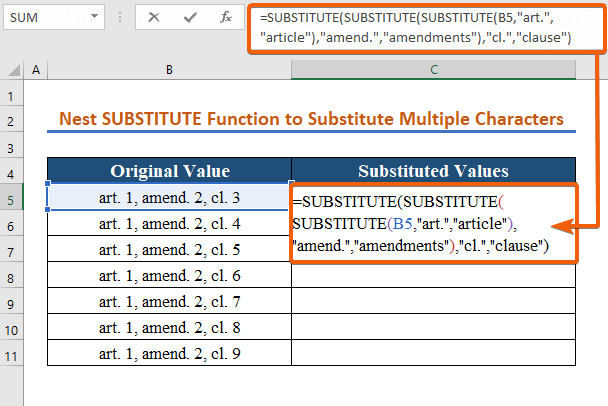 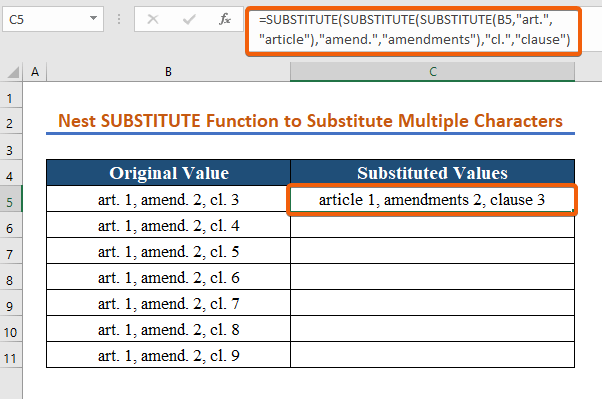 Therefore, you will see the substituted values shown in the screenshot below. 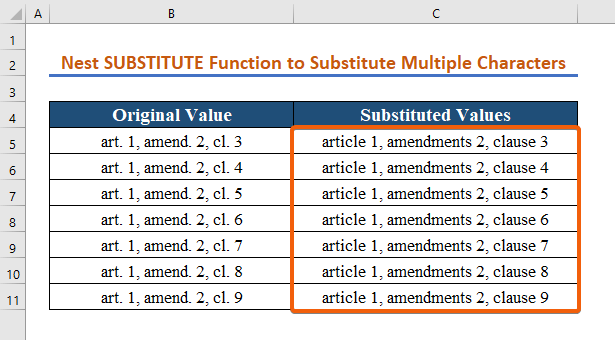 In addition to the previous methods, you can also use the SUBSTITUTE Function with the INDEX Function to substitute multiple characters.

For example, you want to substitute red and blue with green and white consecutively. Multiple SUBSTITUTE Functions can be nested, and the INDEX function can be used to feed in find/replace pairs from another table. 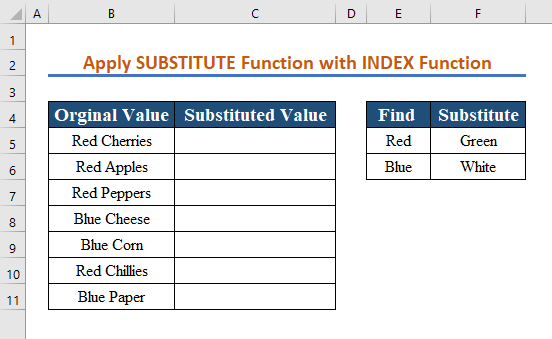 To substitute multiple characters applying both the SUBSTITUTE and the INDEX Function follow the steps below. 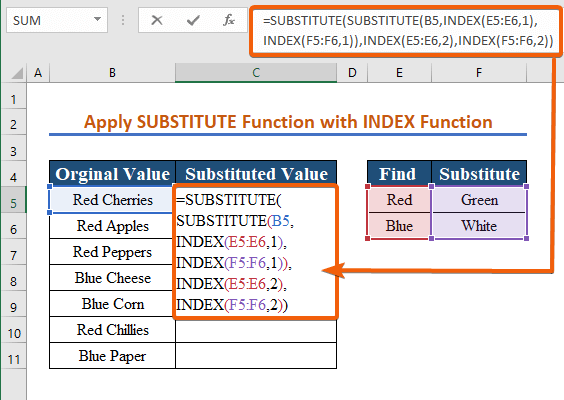 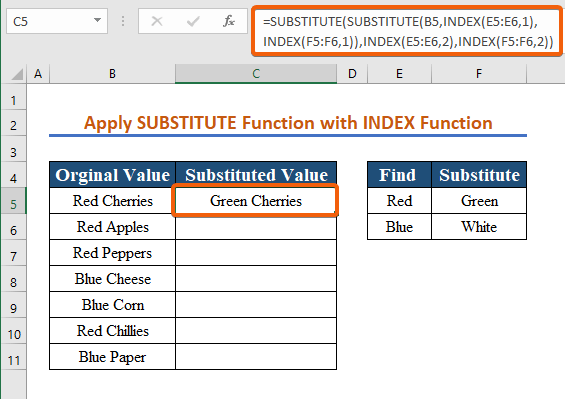 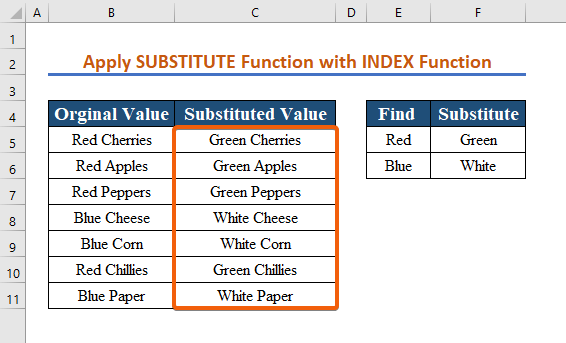 The syntax of the Excel REPLACE Function is as follows:

As you see, the REPLACE Function has 4 arguments, all of which are compulsory.

Start_num – the position of the first character within old_text.

Num_chars – the number of characters you want to replace.

For example, to substitute the word “Face” for “Fact“, you can follow these steps below. 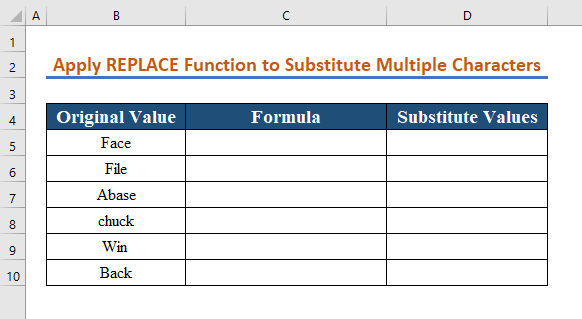 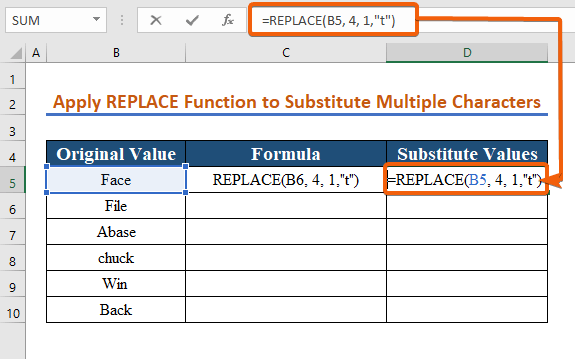 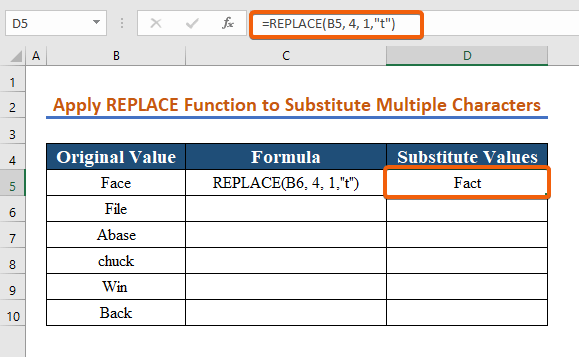 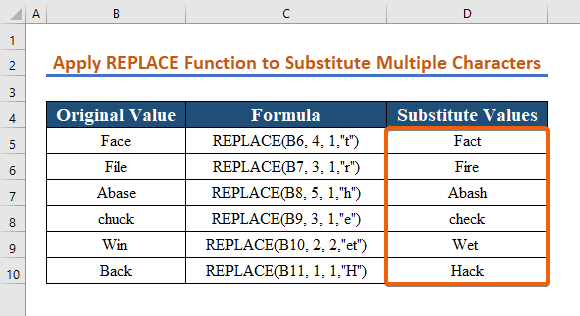 Quite often, it’s probable that you’ll need to change multiple items in the same cell. Of course, you could perform one replacement, output an intermediate result into a new column, and then use the REPLACE Function once more. However, using nested REPLACE Functions, which allow you to do several replacements with a single formula, is a better and more professional option. Similar to the SUBSTITUTE Function, you can also apply nest in the REPLACE Function. 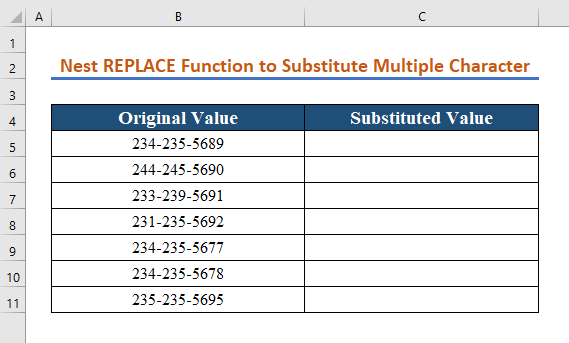 To Substitute the multiple characters in multiple places, follow the steps below. 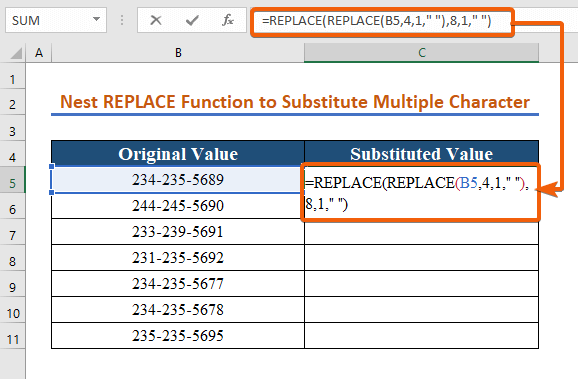 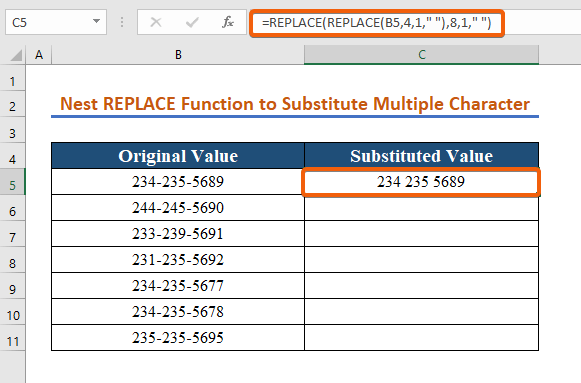 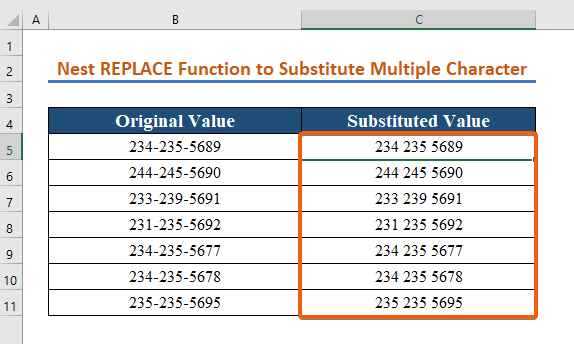 Interestingly, you can apply VBA code to obtain the same to substitute multiple characters. In addition, you can change it as you want without concerning the character number or place as seen in the two previously described functions.

To run a VBA code to substitute multiple characters, just follow the steps described below. 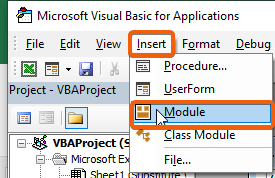 myStringToReplace = “value you want to substitute”

To conclude, I hope this article has provided detailed guidance to substitute multiple characters in Excel. All of these procedures should be learned and applied to your dataset. Take a look at the practice workbook and put these skills to the test. We’re motivated to keep making tutorials like this because of your valuable support.

If you have any questions – Feel free to ask us. Also, feel free to leave comments in the section below.

We, The Exceldemy Team, are always responsive to your queries.

Stay with us & keep learning.

Myself, Bhubon Costa, an engineer, is currently employed with Exceldemy as an Excel & VBA Content Developer. I appreciate solving analytical difficulties, finding practical answers, and, for the most part, I enjoy taking on new tasks. I write articles on Exceldemy about various ways to get out of Microsoft Excel's stuck conditions. My passion is to leave my mark on the world through my work and to have an impact on the community who benefit from it.