How to Use the Exponential Growth Formula in Excel (2 Methods)

2 Methods of Using the Exponential Growth Formula in Excel

Description: Assuming y is a function of x, the GROWTH function calculates values of y for a given set of x values. It uses an existing set of x and y values to determine the relationship among them. Then applies it to output y values for a series of new x values based on the determined relation.

The GROWTH function uses the following equation to calculate values:
y= b*mx
where y is the intercept from the y axis and m is the slope of the curve.

Here,
known_ys – A set of known y values that is a required argument.
known_xs– A set of known x values of the same dimension as of the set of y values and it is an optional argument.
new_xs- A set of new x values for which the function should calculate the predicted y values. It is also optional. If not given the function assumes it as the same length as the set of known x values.
const– If TRUE or omitted, b is calculated normally.
If FALSE, b is set to 1 and the equation is adjusted to y= mx

Now let’s do some examples to understand how to use the GROWTH function in practice.

In this example, we just input the known_ys argument to illustrate the growth. Follow the guide below. 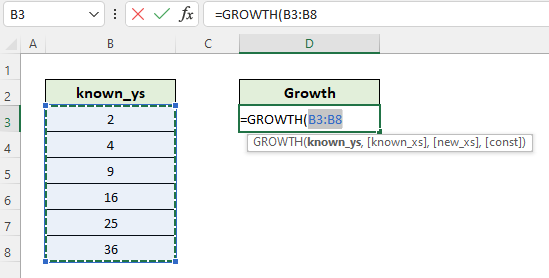 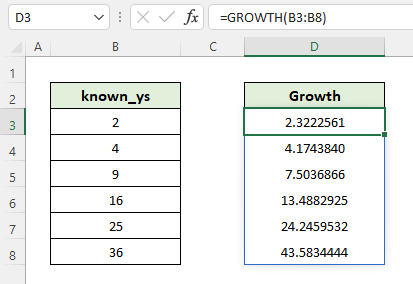 Here we have the growth in cells D3:D8.

We can round up the growth values by using the ROUND function along with the GROWTH function. Put the following formula in cell D3: 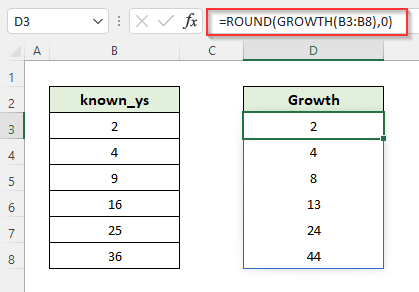 In this example, we used two arguments i.e., known_ys and known_xs in the GROWTH function to predict the growth. Let’s see if we get any difference from the previous example.

What we see from the above screenshot is, the growth is the same as that of example 1.

Here we also added a new_xs column for which the GROWTH function will predict growth. In cell E3, put the following formula.

As we described earlier, the GROWTH function predicts values based on the relationship (equation) is found from the existing data, which is illustrated in the following screenshot.

In the last 3 examples, we omitted the const argument. As a result, the function used the default TRUE value to predict the exponential growth. In the following screenshot, we showed the difference in the growth values for different const arguments.

If we have a quantity (population, profit, investment, etc) that grows at a constant rate during a number of time intervals then we can use an exponential growth formula to predict future growth.

Exponential Growth (y) = a*(1+r)^x
Here, a = Initial value of a quantity, for example, population, profit, investment, etc.
r = Constant rate of growth of that quantity.
x = Number of time intervals.
Let’s say we have an initial investment of 10,000 dollars. We want to find out the value after 4 years at a constant rate of 6%. 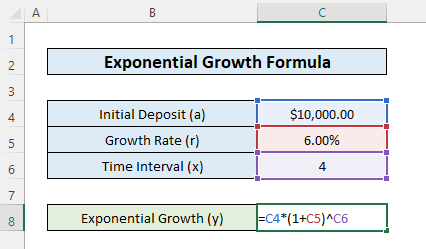 This is the outcome. 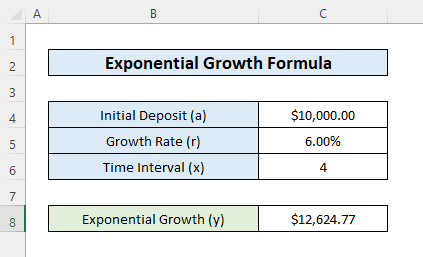 Different types of Errors in the GROWTH function

This #REF! error happens if the lengths (dimensions) of the known_ys and known_xs values are not equal.

Use the GROWTH Function as Array.

We can use the GROWTH function as an array function while calculating more than one y value. For this, we just need to put the formula into the cell and then press Ctrl + Shift + Enter.

Now, we know how to use the exponential growth formula in Excel. Hopefully, it would encourage you to use these methods more confidently. Any questions or suggestions don’t forget to put them in the comment box below.