Excel Solver with a Case Study [Rate Your Sports Team]

Ratings are numerical representations of competitive strength which is directly comparable. It is often applied directly to predict the game outcome between any two teams. The Sports rating systems have been around for almost 80 years and use a variety of methods for rating teams. Today I’d like to have a discussion on how to rate sports teams using Excel Solver.

Table of Contents hide
1 The problem to be solved in this article
2 The equation uses to calculate predicted outcome with team ratings available
3 Set up the model for our problem
3.1 Determine By Changing Cells
3.2 Determine Target cell
3.2.1 Actual Outcome
3.2.2 Predicted Outcome
3.2.3 Squared Error
3.2.4 Sum all the Squared Errors
3.3 Determine Constraints
4. Use Excel Solver to solve the problem
Remark:
Read More…
Download working file

1 The problem to be solved in this article

Suppose that we have scores (these are only dummy scores) as shown in Figure 1.1. Column D includes names for Home Team while column F displays the names of the Visitor Team. Column E and column G are filled with scores for Home Teams and Visitor Teams respectively. How to determine the ratings for NFL teams?

When two teams of equal quality play, the team at home tends to win more often. The size of this kind of effect is called home-field edge. The number of points by which the home team outscores the visitor team can be predicted by using the following equation:

3 Set up the model for our problem

From the problem, we can see that our objective is to give ratings for each team. But the ratings could not be applied to our target cell since there are a lot of teams. Home-field edge and Team ratings are By Changing Cells in our problem instead.

Now we have determined By Changing Cells, what is our Target Cell? We want the prediction to be as close as possible to the outcome of each game, right? It implies that to minimize the sum over all differences between Actual outcome and the Predicted outcome can be used as the target cell. However, there is a problem. The positive and negative prediction errors can cancel each other out. For example, if you over-predict the home team margin by 5 points on one game and under-predict the home team margin by 5 points in another game, the sum of the two differences will yield a value of 0. But in fact, you were off by 10 points for a game. To not cancel out both positive and negative errors, we can use another method – to add up 2 power of [(Actual Outcome) – (Predicted Outcome)] for all games.

As shown in Figure 1.2, cells B3 and other cells B7 through B38 are By Changing Cells. Column E contains Home Team Score while Column G contains Visitor Team Score. By entering the formula “=E3 – G3” into cell H3, you can compute the outcome of the first game (the number of points by which the home team beats the visiting team). By copying this formula into cells H4 through H258, we can get the actual outcome for other games.

In column J, compute the squared error (Actual outcome – Predicted outcome)^2  for each game. The squared error for the first game is computed in cell J3 with the “= (H3 – I3)^2” formula. Copy this formula down to row 258.

4. Use Excel Solver to solve the problem

If you are not familiar with Excel Solver, you can read one of my previous articles – Using Excel Solver to Determine the Optimal Product Mixtures – for details.

Click on Solver in Analysis group to open Solver Parameters dialog box. The Solver Parameters dialog box for this model is shown in Figure 1.3. Please note that there is a comma between “$B$7:$B$38” and “$B$3” in By Changing Variable Cells filed. Another thing that requires your attention is that this model is no longer a simple LP model. We selected GRG Nonlinear engine as shown in Figure 1.3. 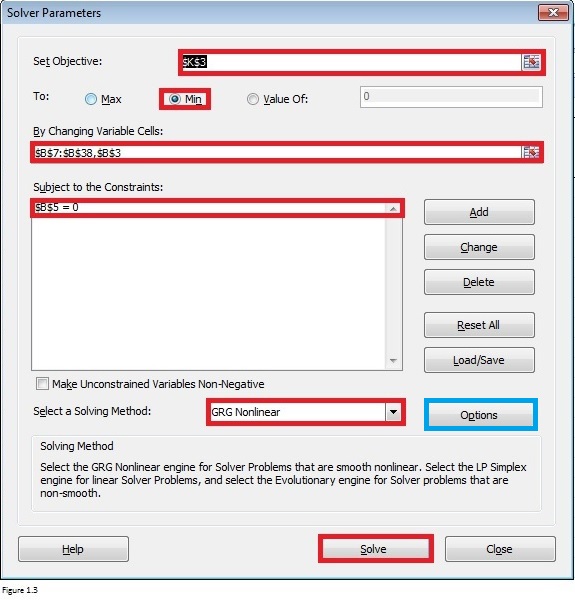 After clicking on the Solve and then OK in Solver Results dialog box, we can get the following results.  It shows that Seattle Seahawks has 4 points better than St Louis Ram.

Read More: How to Use Solver in Excel (Solving Linear Programming Problems)!

When the message “Solver found a solution” appears in Solver Results dialog box, it means that the GRG method has found a locally optimal solution. When the message “Solver has converged to the current solution” appears, it means that the objective function value is changing very slowly for the last few iterations or trial solutions and it stops before getting the most satisfying solutions. In this case, we can change the default value of 0.0001 to 0.00001 or 0.000001 in the Convergence edit box in Options dialog box (Figure 2).  By clicking on Options in Solver Parameter dialog box, we can open Options dialog box. 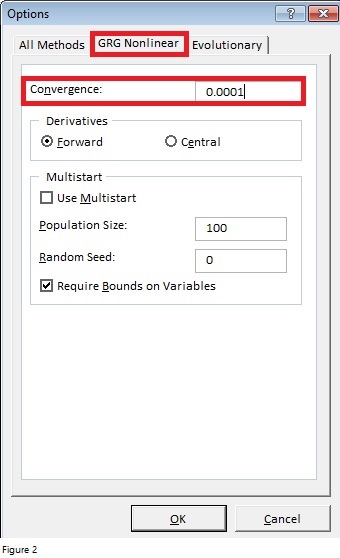