7 Suitable Ways to Round to Nearest 1000 in Excel 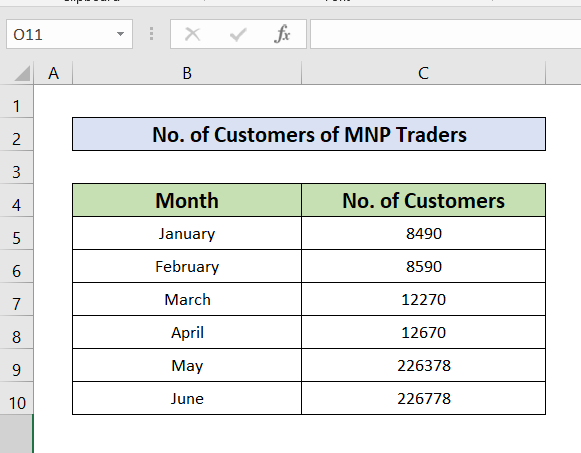 1. Round to Nearest 1000 Using ROUND Function

The best way to round numbers is to use the ROUND function. The syntax of the Round function is,

Let`s insert some numbers in the worksheet to see how this ROUND function works. The number can be rounded up or rounded down depending on the value of the number. We will see two formulas with the ROUND function which will give us the same result.

The formulas that we will be using are, 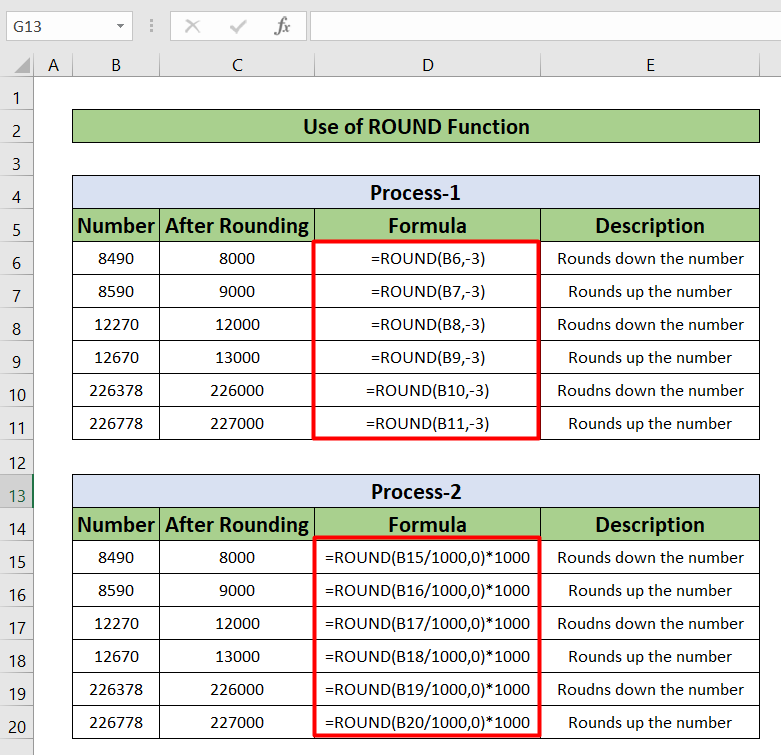 From the above picture, we can see that with two different formulas give the same rounding result for the same number. Here we are working to round the number to its nearest 1000. For each of the numbers when the hundred place digit is greater or equal to number 5 the formula will round up the result. If the hundred place digit is less than 5 than the formula will round down the number.

2. Apply ROUNDUP Function to Round to Nearest 1000

To round up any number to its nearest 1000 you can use the ROUNDUP function where the num_digit should be -3. So, the formula in this will be, 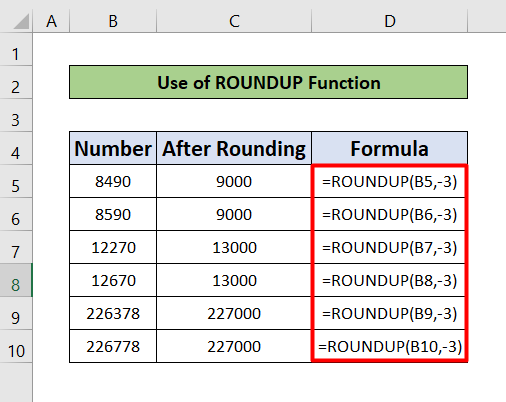 Then, Fill Handle the formula from D5 to D10.

3. Apply ROUNDDOWN Function to Round to Nearest 1000

For rounding down a number to its nearest 1000 you need to use the ROUNDDOWN function. The argument, num_digit should be set as -3 again. So, the formula becomes, 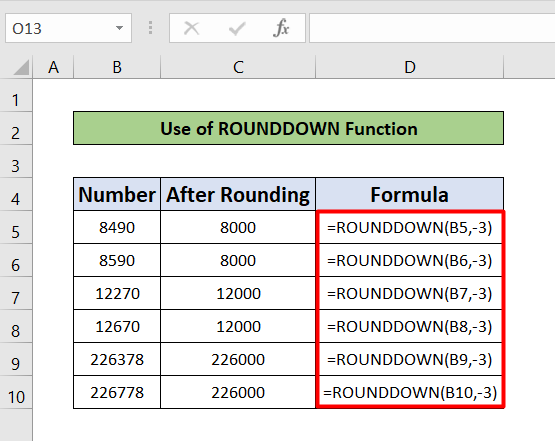 4. Round to Nearest 1000 Using MROUND function

Here the number is the desired number which is rounded up/down. We used multiple arguments here to round up or down the number to the nearest multiple of this value. 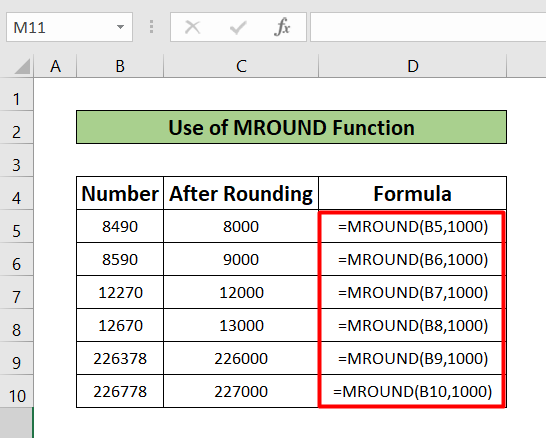 In the above picture, we set the 2nd argument to 1000. So, we can round any number up/down to the nearest multiple of this value.

5. Round Down Numbers to Nearest 1000 Using FLOOR Function

We can use the FLOOR Function to round down a number. Here we will round down different numbers to its nearest 1000. We will use different positive and negative numbers to see how the formula works. 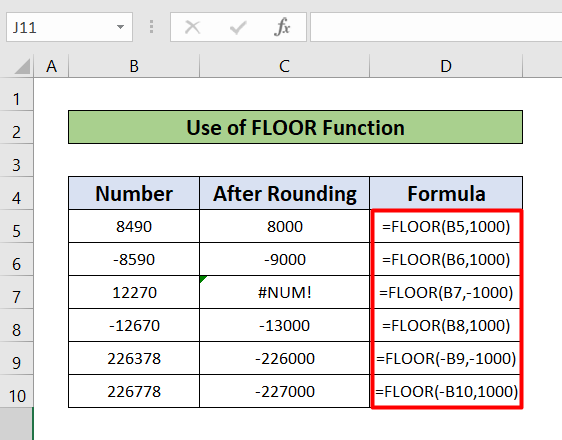 From the above formula we can see that when we use a negative number in the 2nd argument which is the multiple to which you want to round, the 1st argument needs to be negative too. Otherwise, it will give a #NUM error.

Note: While rounding down a number to its nearest 1000 using the FLOOR function, the hundred place digit in a number doesn’t play any role like it does in the ROUND function. 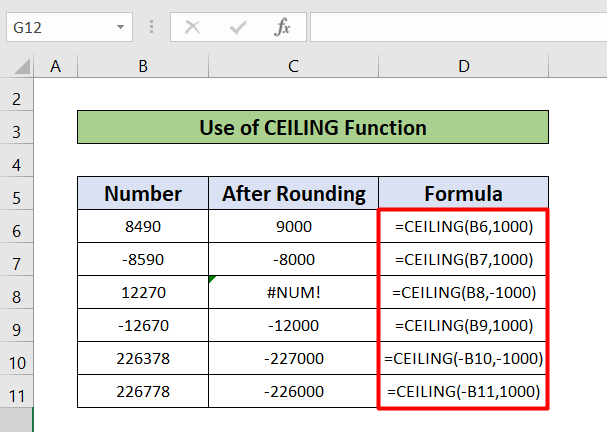 Just like the FLOOR function. In the CEILING function when you use a negative number in the 2nd argument your first argument should also be negative otherwise it will give us a #NUM error.

Note: While rounding up a number to its nearest 1000 using the CEILING function, the hundred place digit in a number doesn’t play any role like it does in the ROUND function.

7. Rounding a Number to Its Nearest 1000 Using Custom Number Formatting 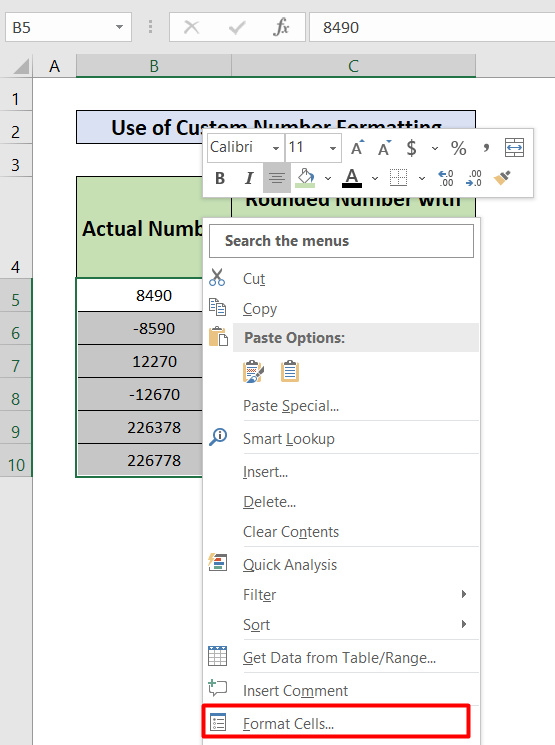 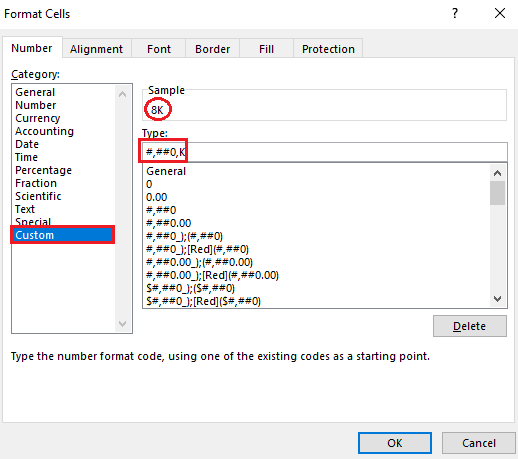 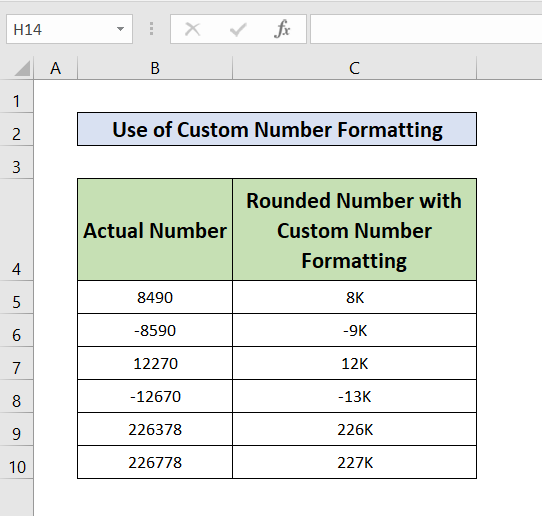 In this article, we saw different processes of Excel round to nearest 1000. We saw different formulas along with custom number formatting. Among all the Formulas, we can say using the ROUND or MROUND function is a good choice for rounding the number to its nearest thousands as we can both round up and round down the numbers with this single formula.

Hope you will like this article. Stay tuned for more useful articles and don’t forget to comment below if you face any difficulties.

How to Create Actual Vs Budget Variance Reports in Excel

How to Convert Dollar into Rupees in Excel (2 Easy Methods)

How to Average Values Greater Than Zero in Excel (4 Ways)