Often, we work with different kinds of data in Excel. We also perform data analysis. For that purpose, we may need to generate random numbers. We can handle that simple task by using the RAND function. However, real-life scenarios don’t contain evenly distributed values. And for this reason, we need random numbers with Normal Distribution. In this article, we’ll show you the effective methods of the Random Number Generator with Normal Distribution in Excel.

To illustrate, we’ll use a sample dataset as an example. For instance, the following dataset specifies the Mean and Standard Deviation. We’ll thus generate 5 Random Numbers.

The Normal Distribution is also known as a Bell Curve. The theory is based on the idea that the distribution of values mainly clusters around an average. Still very high and very low values are possible in certain cases. But, they are rare compared to the ones closer to the average.

4 Methods of Random Number Generator with Normal Distribution in Excel

We know Excel provides many different functions. And we use them to perform numerous operations. The NORMINV function is one of such kind. It helps us to generate the inverse of the normal cumulative distribution. We have to specify the mean and the standard deviation in this function argument in order to perform the task. Therefore, follow the steps below to know the Random Number Generator with Normal Distribution in Excel. 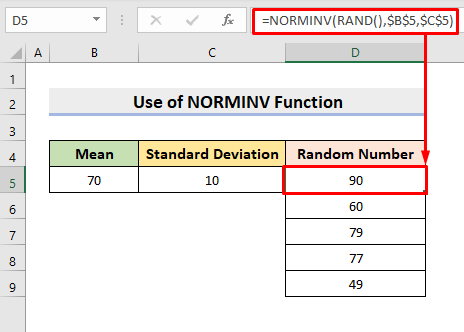 Here, B5 is the Mean and C5 is the Standard Deviation. We input the probability required in this function argument with the RAND function.

Additionally, we can perform a similar task as stated in the previous method with the NORM.INV function. This function also returns the inverse of the normal cumulative distribution. But it is more compatible with the latest MS Excel versions. So, learn the following steps to carry out the operation. 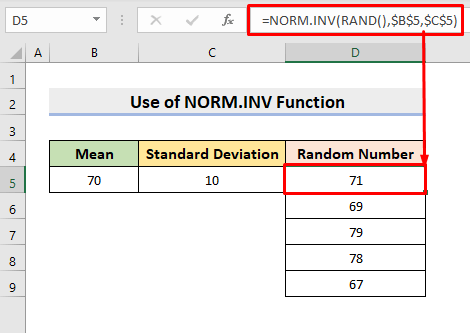 B5 is the Mean and C5 is the Standard Deviation. And we use the RAND function to input the probability required in this function argument.

3. Use Box Muller Method for Random Number Generator with Normal Distribution in Excel

In this method, we’ll create a formula combining different Excel functions to apply the Box Muller method. Hence, follow the process to perform the task. 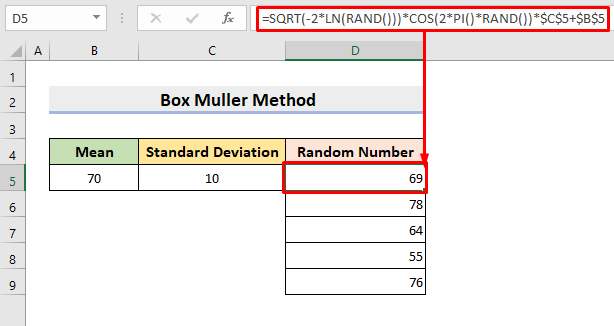 The LN function returns the natural logarithm of the numbers returned by the RAND function.

The COS function returns the cosine of 2*PI()*RAND().

Read More: How to Use Random Number Generator in Excel (5 Quick Ways) 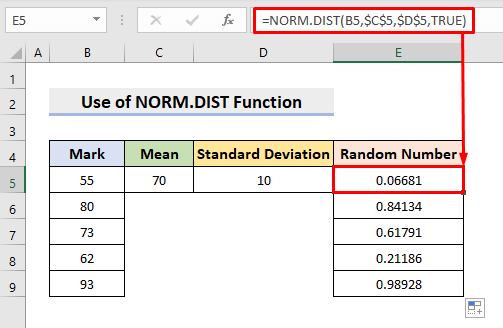 Here, we generate the normally distributed random number for each mark in the B column.

Henceforth, you will be able to know the Random Number Generator with Normal Distribution in Excel using the above-described methods. Keep using them. Let us know if you have any more ways to do the task. Don’t forget to drop comments, suggestions, or queries if you have any in the comment section below.

I'm Aung. Recently I've earned my B.Sc. Degree in Electrical and Electronic Engineering. From now on, I will be working in Microsoft Excel and other useful software, and I’ll upload articles related to them. My current goal is to write technical contents for anybody and everybody that will make the learning process of new software and features a happy journey.

How to Make Credit Card Debt Reduction Calculator for Excel

How to Calculate Grades with Weighted Percentages in Excel

How to Calculate Loan Payment in Excel (4 Suitable Examples)

How to Calculate Current Portion Of Long Term Debt in Excel