How to Use Cell References in Excel Formula (All Possible Ways) 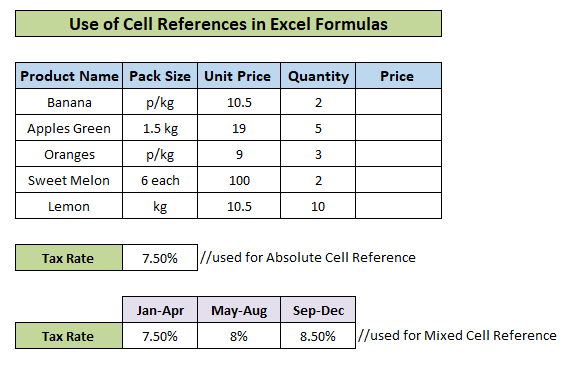 1. Use of Relative Cell Reference in Formula in Excel

What is Relative Cell Reference in Excel?

In Excel, all cell references are relative, by default. Relative cell reference changes according to the relative position of rows and columns while copied and then pasted through a range of cells. In the following example, we’ll see how the formula D5*E5 changes like D6*E6, D7*D7, and D9*E9 at last.

How to Use Relative Cell References in Formula in Excel

In this example, we’ll copy and paste the formula which calculates the product of Unit Price and Quantity through the other column cells to show the use of relative cell reference. Let’s follow the example: 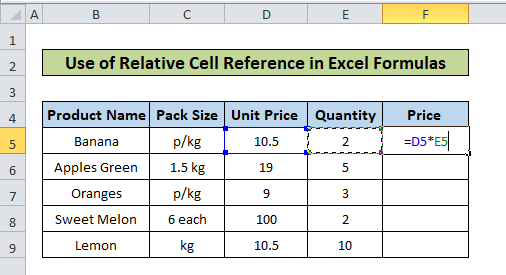 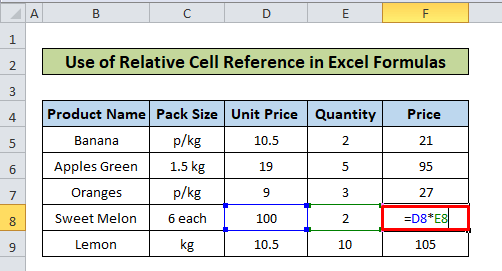 Now to check, click on any of the cells from F6:F9. Here we clicked on cell F8 which shows the formula as a product of cells D8 and E8, relative to the row number of cell F8.

What is Absolute Cell Reference in Excel?

How to Use Absolute Cell References in Excel Formula

In this example, we calculated the Price After Tax value on a fixed tax rate of 7.5%, stored in cell C11. To get this we used the Total Price values that were calculated in the previous example. Let’s dive into the example:

To make cell C11 an absolute reference we put the $ sign before the column value C and also before the row value 11, which is $C$11. Here F5 is a relative reference that will change relative to the row number downwards. 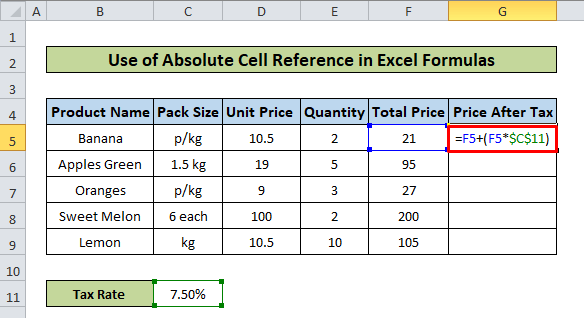 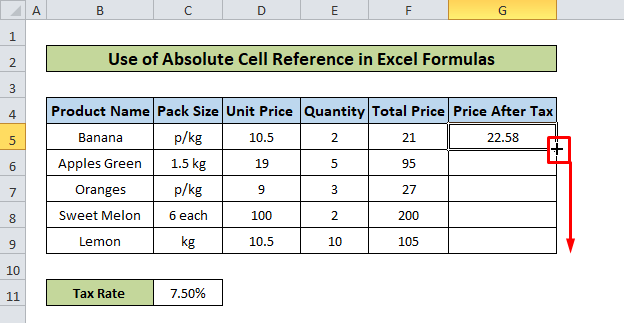 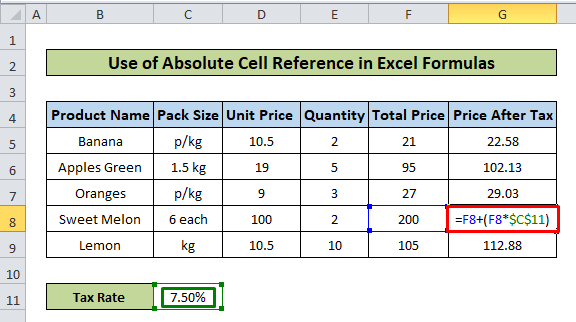 What is Mixed Cell Reference in Excel?

How to Write a Formula Using Mixed Cell References in Excel

Here we put the tax rate cell reference as C$13 which is mixed. We put the $ sign before the column value 13 to make it absolute column-wise and left the row value C without the $ sign as it’ll be relative row-wise.

There is another way to look at the formula. $F6 is also a mixed cell reference. It is relative through the column cells and absolute through the row cells while calculating the Price After Tax values. 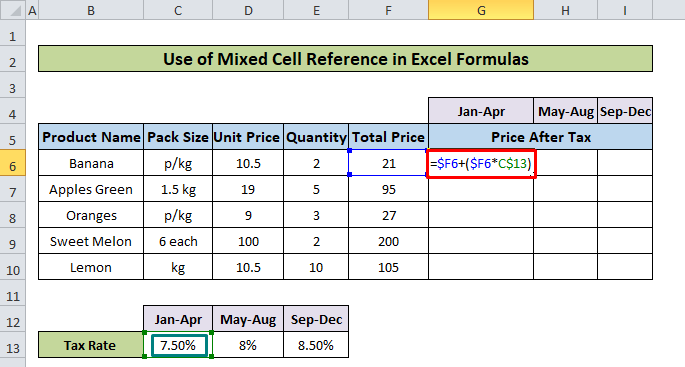 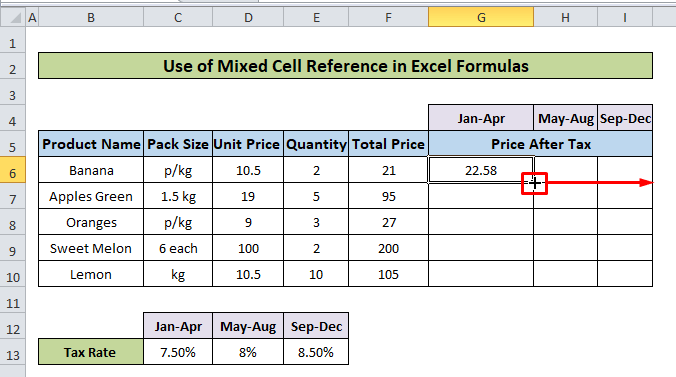 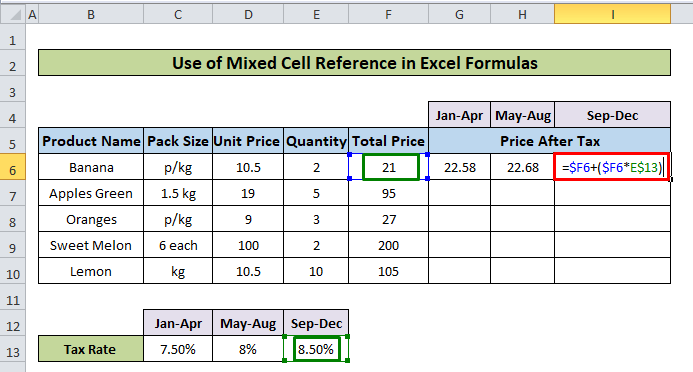 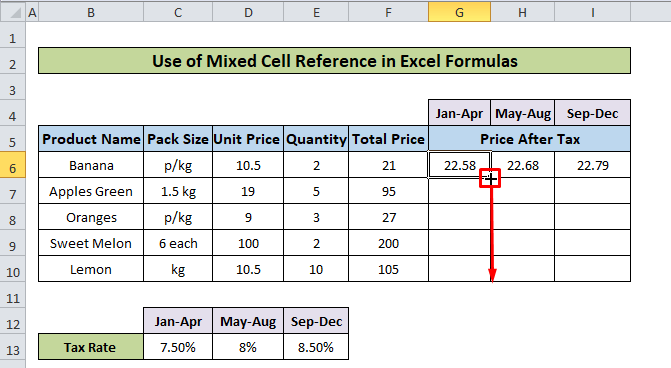 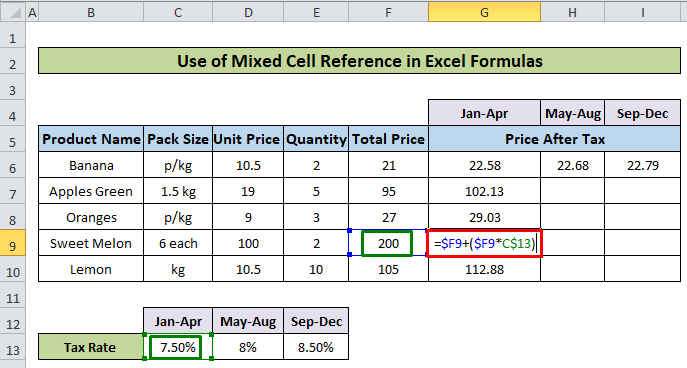 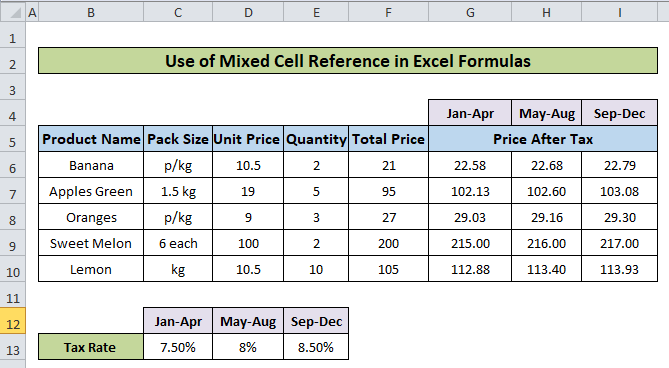 Now, we know how to use different types of cell references in Excel. Hopefully, it would encourage you to use this functionality more confidently. Any questions or suggestions don’t forget to put them in the comment box below.