How to Calculate Variance in Excel (Easy Guide)

In this article, we shall show you how to calculate variance in Excel. Variance is one of the most useful concepts in statistics. It gives the measurement of how the numbers of data are distributed about the mean/expected value. It measures the distribution by looking at all the data points.

How to Calculate Percentage Variance in Excel

How to Calculate Population Variance in Excel With Formula

For calculating the population variance, the following formula is used.

How to Calculate Sample Variance in Excel With Formula

For calculating the population variance, the following formula is used.

Here we will use the same example for the calculation. As you can see, there is only one difference between the previous formula and this. It is that the sample formula has a denominator of N-1. Previously the denominator was N. The whole calculation in Excel will be the same. The only difference will be dividing the square of the deviation about the mean (X-μ)2 by (N-1) instead of N. Here the calculated value is 102.7. Instead of 5, the deviation about the mean (X-μ)2 is now divided by 4. So, with the same values of data, the sample variance is always greater than the population variance. The following picture shows the result and necessary data table for the calculation of sample variance.

The above description describes the detailed calculation process of sample and population variance. In excel there are 4 built-in functions for calculating the variances. You just need to define the range for which you want to find the variance. 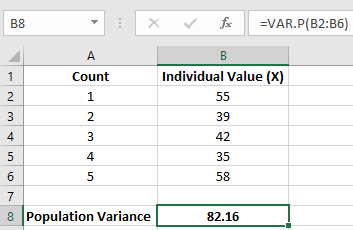 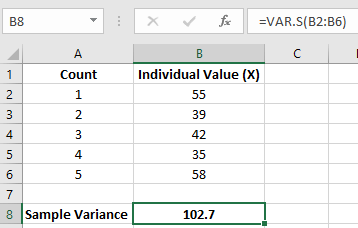 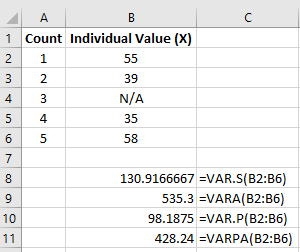 You will find all the calculations provided in this article in the below file.

How to calculate Variance in Excel-calculation

I hope you will find this article useful. Follow this website for many useful articles regarding Microsoft Excel.