How to Split a Single Cell in Half in Excel

Excel has a lot of features that are meant for performing enormous operations and formatting. You may need to add two different types of headings in a single cell and for performing this task smartly, firstly you need to split a single cell in half. Then you can easily add one text to a split cell and another text to the other half. 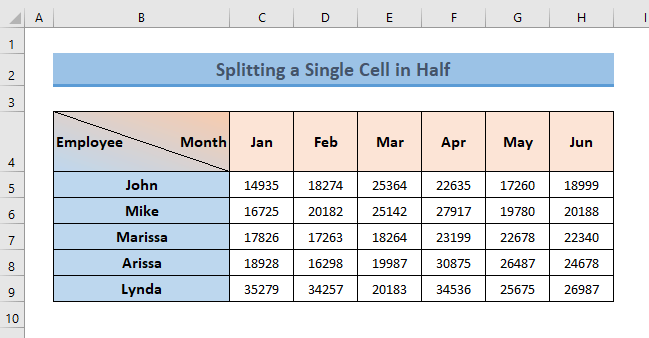 If you are looking for the process of splitting a single cell in half, then you’re in the right place. This is the best-researched guide on the above topics.

Here, I will show you how to split a single cell in half in Excel.

In this section, you will find 2 methods to split a single cell in half in an Excel workbook. The processes will be applicable in any version of Excel from 2016 to 365. Here, I will demonstrate them with proper illustrations. Let’s check them now!

1. Split a Single Cell in Half Diagonally

You see that whatever change I make with the cell; the format is not changing. That is what you want, right?

Let me show you how you can split a cell in that way. It is very easy.

1.1. Splitting a Single Cell in Half (Diagonally Down)

Let’s say, we have a dataset of some employees of an organization and their monthly sales (in USD) till half of the running year.

At the intersection of the row describing month and the column describing employee name, I have put two texts (i.e. Employee & Month). It looks so unprofessional if you put two types of texts in a single cell without splitting the cell. We want to split this cell into two so that one part contains the text “Employee” and another part takes “Month“. In order to serve this purpose, proceed with the following steps. 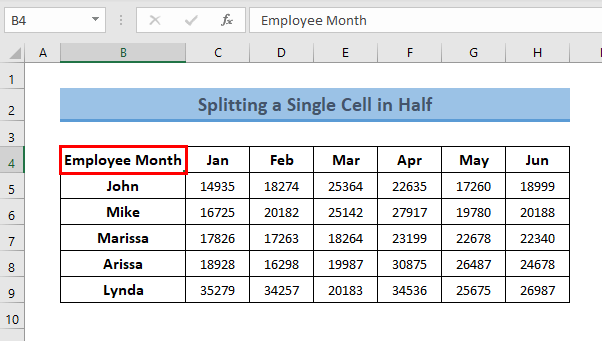 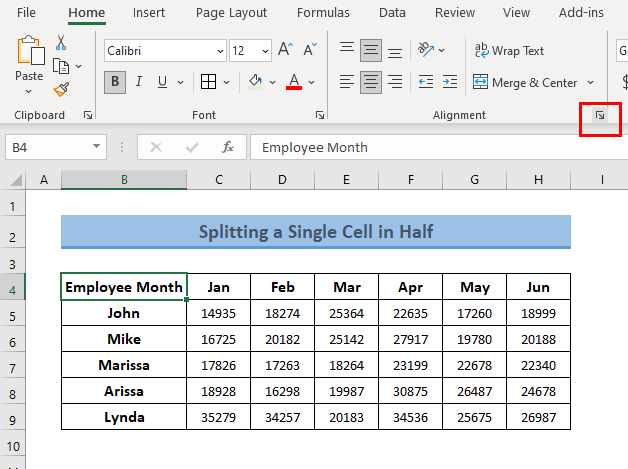 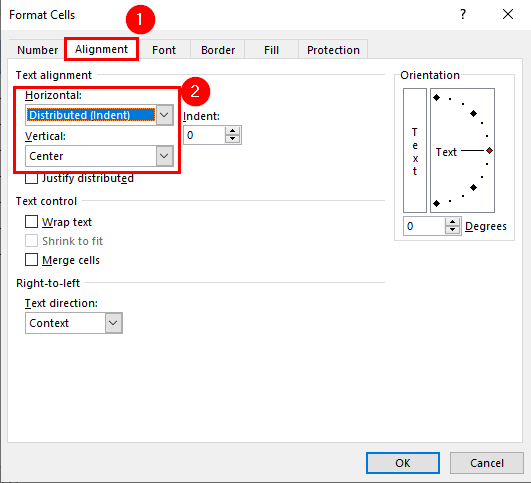 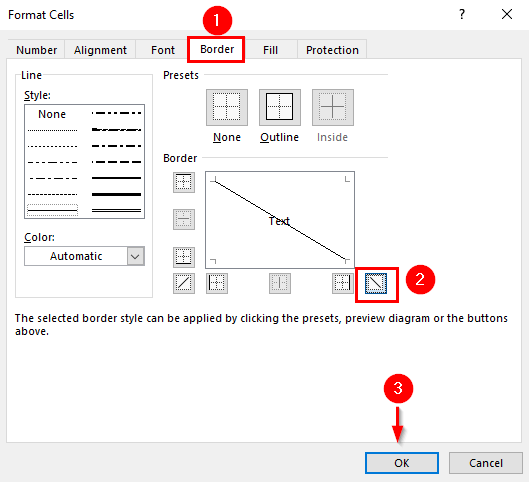 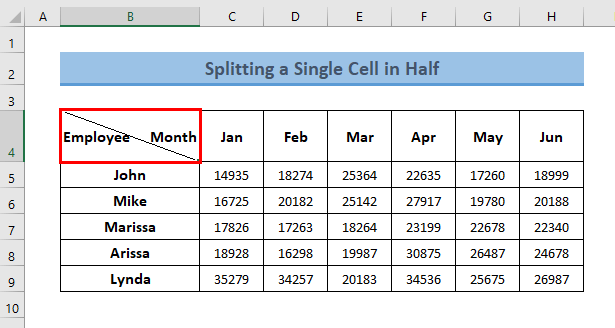 1.2. Splitting a Cell in Half (Diagonally Up)

For the same set of data, if you want to split a cell in a Diagonally Up way, change the alignment just like you did for Diagonally Down but here, choose this border option from the Border tab. 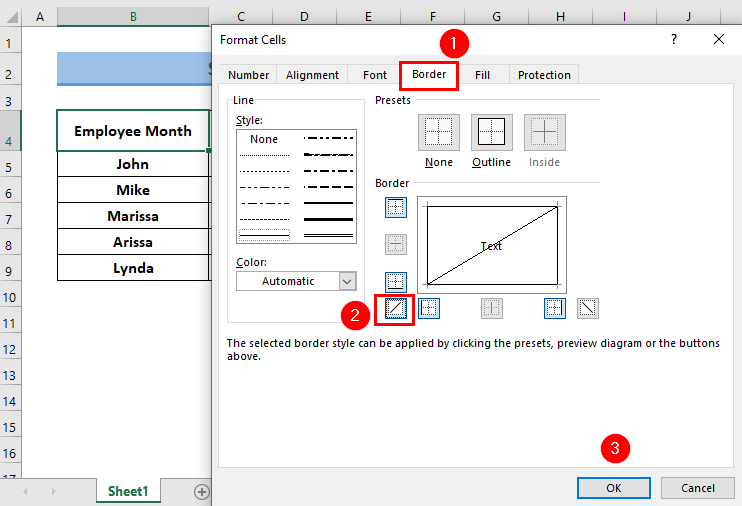 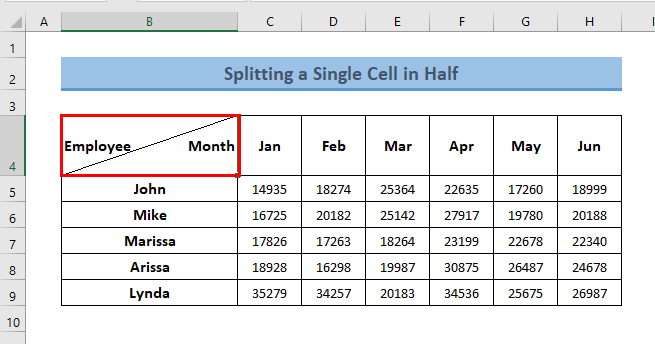 Read More: How to Split Cells in Excel (5 Easy Tricks)

1.3. Split a Cell Diagonally Using Objects (Effective in Some Cases)

The following GIF represents all the steps described above.

2. Split a Single Cell in Half Horizontally

Using the above method (Using Objects), you can also split a cell in half horizontally.

See the image below. I have used the Rectangle to draw the object into the cell. And then I have input a link to the object. 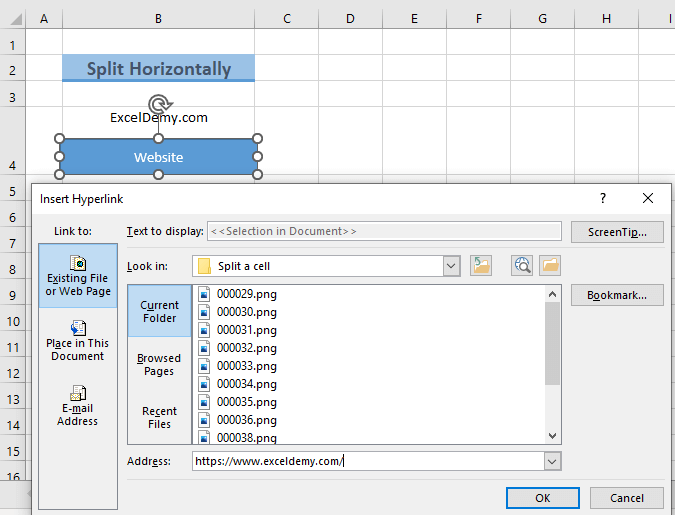 Here is the final output. 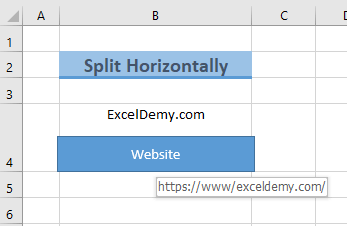 Let me show you how to split a cell diagonally with two background colors. 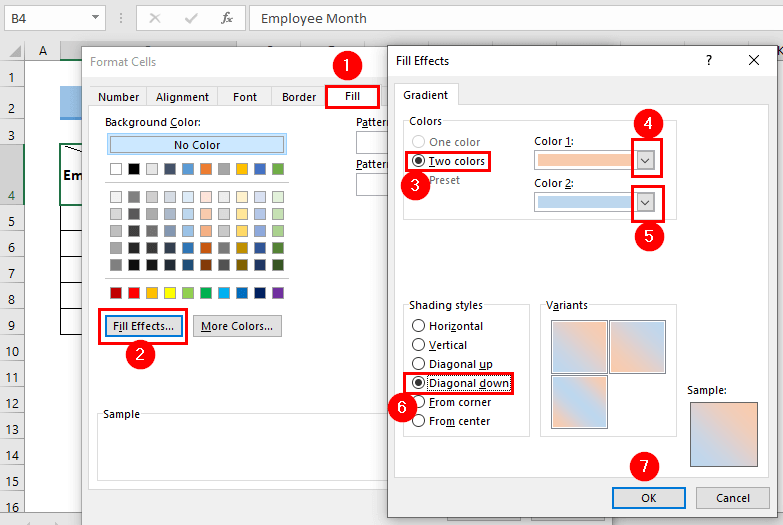 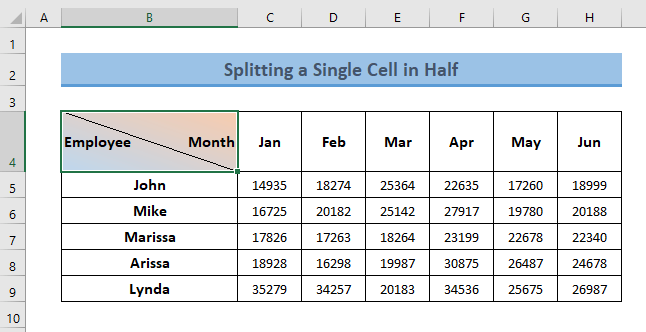 So, these are my ways to split a cell in half in Excel. I showed both ways: diagonally and horizontally. Do you know a better way? Let me know in the comment box.

Thanks for being with us!

How to Enter Data for Analysis in Excel (2 Easy Ways)

How to Make an ANOVA Table in Excel (3 Suitable Ways)

How to Make an Interactive Calendar in Excel (2 Easy Ways)