When you import data from a database or any other sources, you have to split cell one into two or more in such situations.

In this tutorial, I’m going to discuss how to split one cell into two in Excel using the following effective methods including real-life examples.

How to Split One Cell into Two in Excel

How to Split One Cell into Two in Excel

Here, we have a dataset where column B mainly consists of full names. Now, we have to split the cell of column B into two columns e.g. first name and last name. We can do that using the following methods. 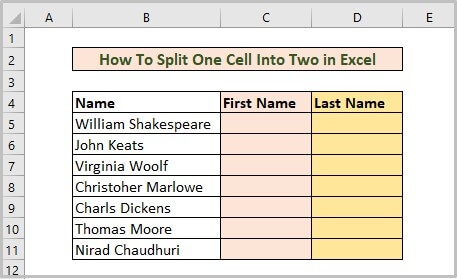 In the dataset, we see the name of my favorite English literary writer. Right now, we’ll split the name into first name and last name using Text to Columns.

Text to Columns is a handy feature in Excel that uses a delimiter to parse the text in one cell/column in many columns.

A delimiter is a type of character e.g. comma, space, semicolon, etc. that separates text strings or other data streams.

In our dataset, Space is the delimiter.

You can proceed with the following steps. 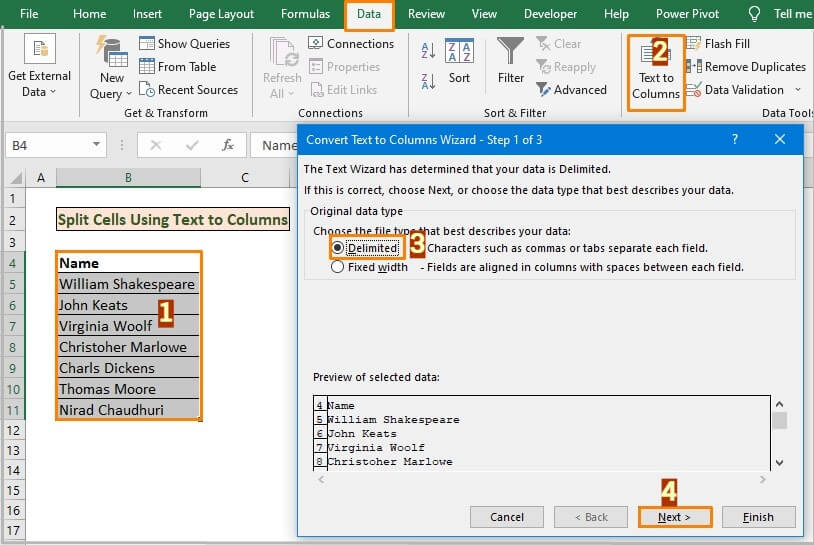 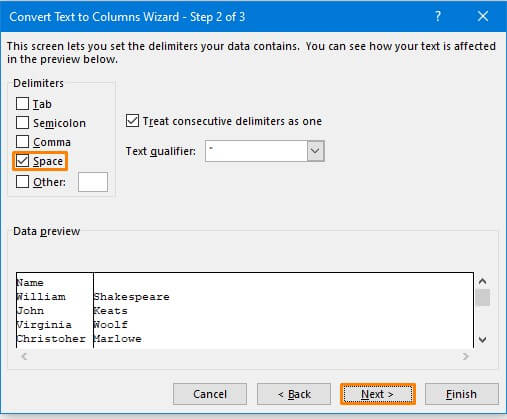 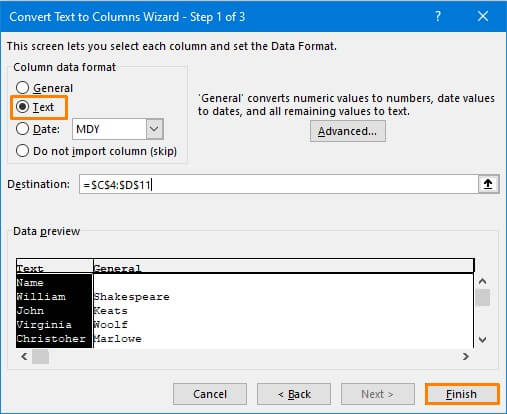 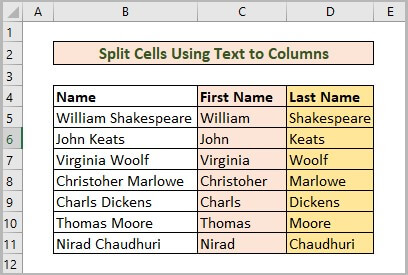 Read More: How to Split Cells in Excel (5 Easy Tricks)

Flash Fill is a special Excel tool that automatically completes values when a pattern in the data is identified. It is available from Microsoft Excel 2013 version.

It is one of those machine learning techniques for evaluation of a data pattern, pattern learning, and cell filling using that pattern.

You can split the name in the dataset into first and last name with the help of this tool. 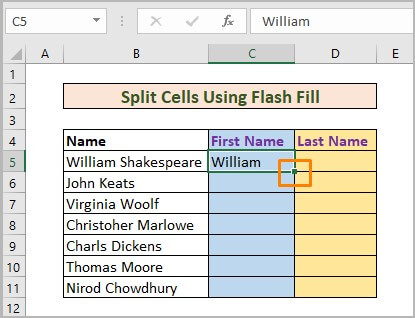 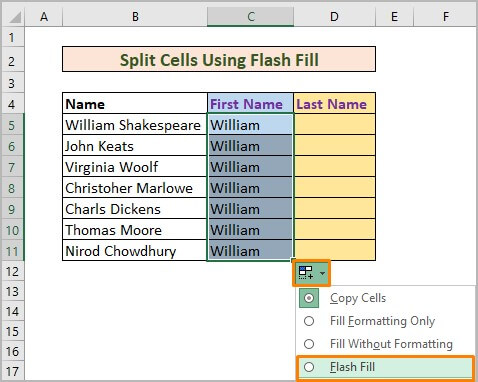 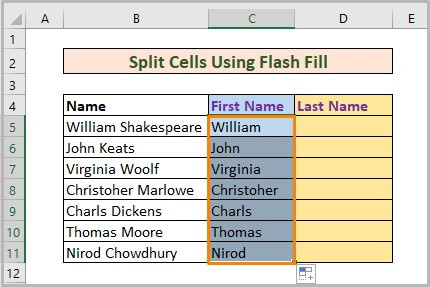 Similarly, you can use the feature for finding last names. In that case, you have to type the last name of the B5 cell in the D5 cell. Now follow the same process as previous. You’ll get the following output. 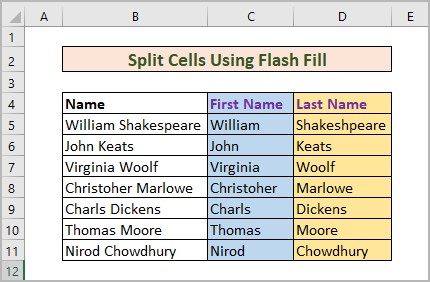 i. Split Cell by Delimiter

We can separate the name into first and last name using the Excel functions with a delimiter. In our dataset, space is the delimiter that exists in the middle of the name.

Let’s have an overview of the functions that will be used here.

The LEFT function extracts text from the left of a string. The syntax of the function is

text – The text from which to extract characters.

num_chars – [optional] The number of characters to extract, starting on the left side of text.

The RIGHT function extracts a given number of characters from the right side of a supplied text string. The syntax of the function is

text – The text from which to extract characters on the right.

num_chars – [optional] The number of characters to extract, starting on the right.

The arguments of the syntax are the following

find_text – The text to find.

within_text – The text to search within.

start_num – [optional] Starting position in the text to search.

FIND function returns the position (as a number) of one text string inside another.

The arguments of the syntax are the following

find_text – The text to find.

within_text – The text to search within.

start_num – [optional] The starting position in the text to search.

Using the LEN function, we can get the length of a text. The syntax of the function is

text – The text for which to calculate length.

The SUBSTITUTE function replaces a text in a given string. The syntax of the function is

text – The text to change.

old_text – The text to replace.

new_text – The text to replace with.

instance – [optional] The instance to replace.

Right away, we are going to find the first name using the combination of LEFT and SEARCH functions.

For this, select a blank cell like C3 and type the formula =LEFT(B5,SEARCH(" ",B5)) where B5 is the cell from which we want to separate the name. And press Enter and use the Fill Handle tool for getting all the outputs of the column. 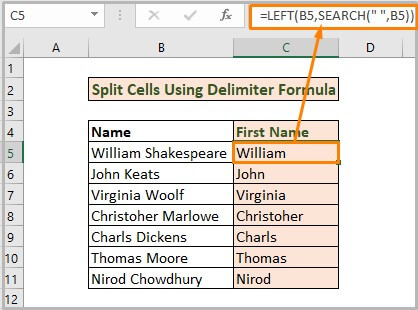 In the same way, we can find the last name by using the following formula i.e.

This method is also similar to the previous except we have to use the CHAR function here.

Now, we can get the first name by entering the formula in a blank cell and use the Fill Handle Tool for the other cell. The formula is =LEFT(B5,SEARCH(CHAR(10),B5,1)-1) where B5 is the text and 10 is the ASCII code for Line feed.

Note. We subtract 1 because we don’t want to extract the delimiter “space” itself. 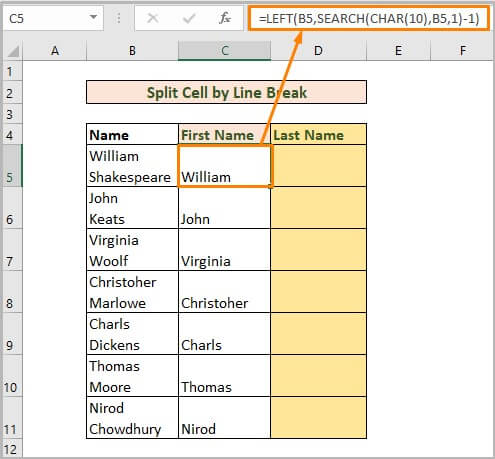 Likewise, type the formula in a blank cell i.e. =RIGHT(B5,LEN(B5)-SEARCH(CHAR(10),B5,SEARCH(CHAR(10),B5))) where B5 is the cell we want to split and 10 is the ASCII code for Line feed. Now press Enter and use the Fill Handle Tool for the other cell in the same column. 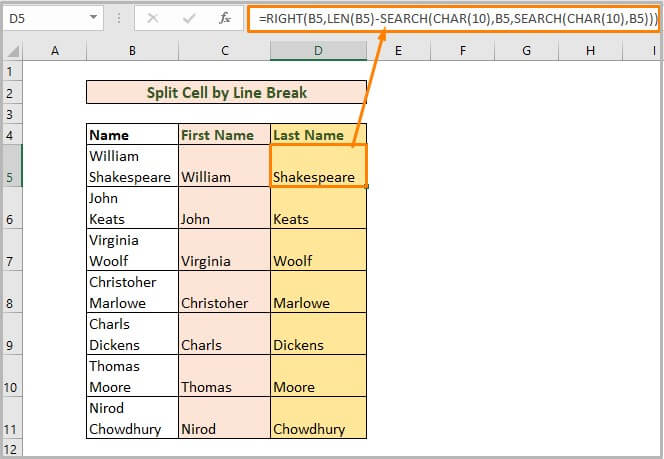 Sometimes, we may split a cell that contains a Text+Number pattern. In that case, we can follow the procedure. Here, we have to use the SUM function along with other functions.

SUM function returns the sum of values supplied. These values may be ranges, arrays, numbers, etc. The syntax of the function is

number1 – The first value to sum.

Now press Enter and use the Fill Handle Tool for the other cells.

For finding the text, type the formula in a blank cell. The formula is

=LEFT(B5,LEN(B5)-LEN(D5)) is B5 the cell that we want to split and D5 is the number that we found from the previous formula. 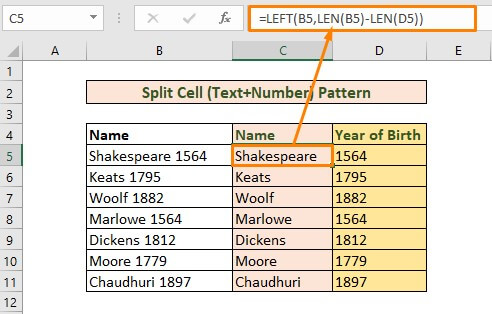 We can separate the name into first and last name also using Power Query. It is a free Microsoft Add-in to import data from various sources and then clean, transform and reshape your data if necessary.

You may proceed with the following steps. 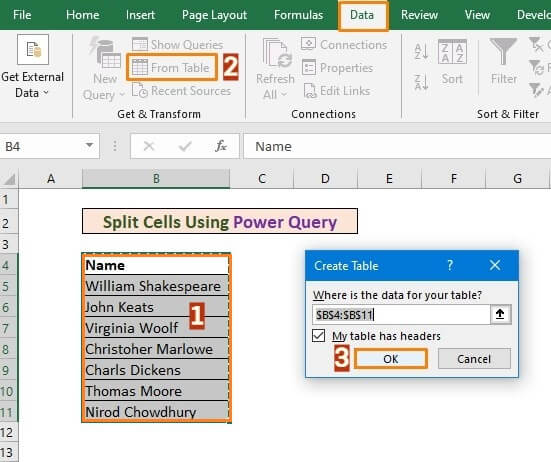 Now you are in the Power Query Editor. And select Home>Split Column>By Delimiter. 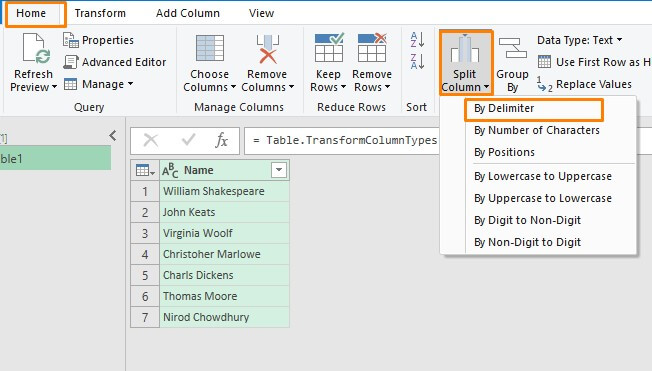 Then you’ll see the following figure. Select the Space as your delimiter and press Ok. 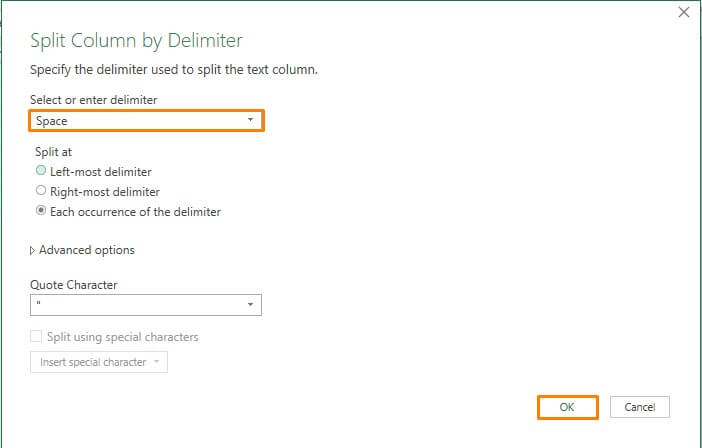 The analysis is completed actually. But you have to load the file in your existing working sheet. For this select Home>Close & Load>Close & Load To. 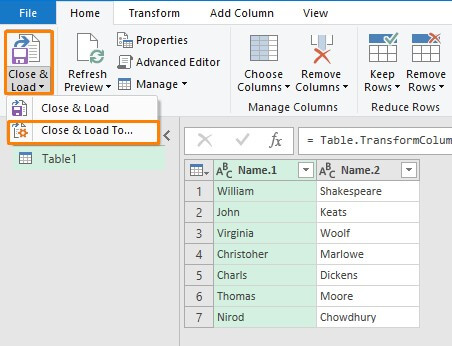 Then choose your destination and press Load 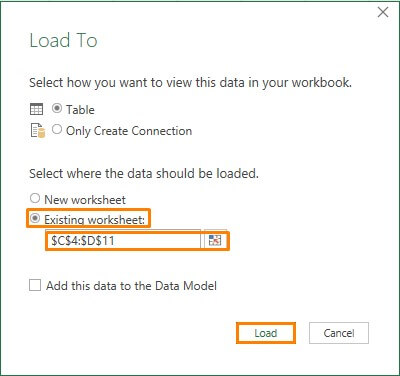 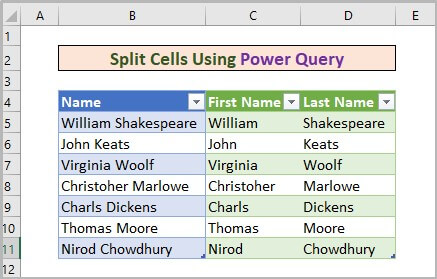 Read More: How to Split a Cell into Two Rows in Excel (3 ways)

Things To Keep in Mind

Besides, be cautious about the file name, file location, and also the extension of the excel file.

I have discussed the most effective and handy ways. Now, choose one based on your data and requirements. And if you have any suggestions and confusion, please let me know.

How to Remove XML Mapping in Excel (with Easy Steps)

Why Is My Excel File So Large? (7 Reasons with Solutions)