In this tutorial, I will discuss several ways to find a partial match in text using excel VLOOKUP approximate match. We all know that the VLOOKUP function finds a particular value in the leftmost column of a data range and returns a desired value in the same row from a column you specify. Unlike partially matching number values, an approximate match of text values is a bit tricky. So, let’s explore some examples of VLOOKUP partial matching of text values.

4 Examples of Excel VLOOKUP to Find Approximate Match for Text

Before finding an approximate match in excel, we should look at the syntax of the VLOOKUP function, which is:

In the above syntax, the fourth argument (range_lookup) indicates whether we are looking for the exact match or an approximate match. Basically, we have two options available to choose from.

By seeing the above discussion, you may think if we put TRUE as the fourth argument, we will get an approximate match of a lookup value in a range of data. Yes, you can get the partial match using this way if the lookup column contains numbers. This is because, when you sort a lookup column (containing numbers) in ascending order, the approximate match will return the next largest value that is less than the lookup value. However, if the lookup column contains text values, an approximate match will not work. In that case, we will use alternative ways such as using a wildcard in the first argument of the function. For example, I will use the asterisk (*) symbol as a wildcard. Remember, we will use the VLOOKUP function in exact match mode while using the wildcard. 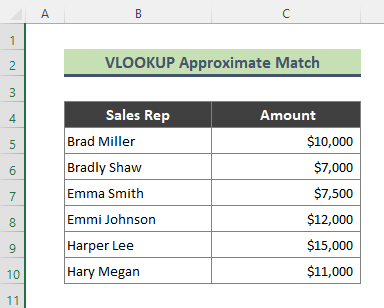 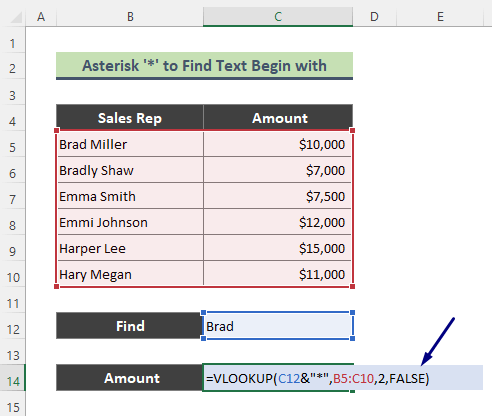 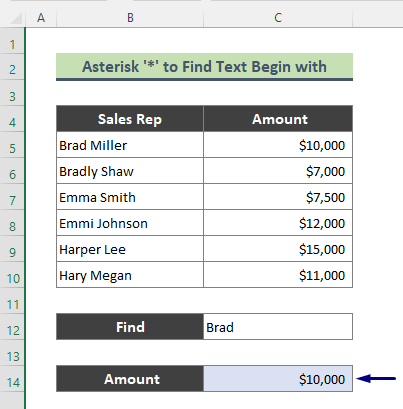 Here, Ampersand (&) joints the value of Cell C12 (Brad) with the wildcard (*). As a result, the lookup value becomes Brad*. So, the VLOOKUP formula looks for the text begins with Brad*. Brad* means the formula will look for any of the names starting with Brad, with zero/more characters subsequently (such as Brad, Bradley, Braden).

The above formula looks for Brad* in the range B5:C10, and returns sales amount from column 2. FALSE in the fourth argument indicates that exact match mode is used here.

Be careful with the duplicates. That means there are two names in my dataset that begin with Brad (Brad Miller and Bradly Shaw). So, if multiple partial matches are found, the above formula will return results only for the first match. As stated above, we got the match result for Brad, not for Bradly.

Now, I will match the sales representative’s name that ends with a particular text portion ‘son’ and thus get the earned sales amount. 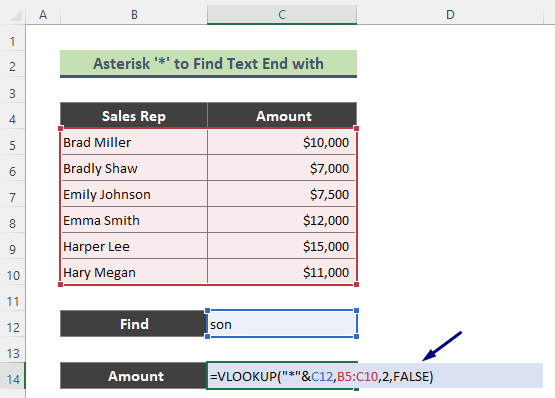 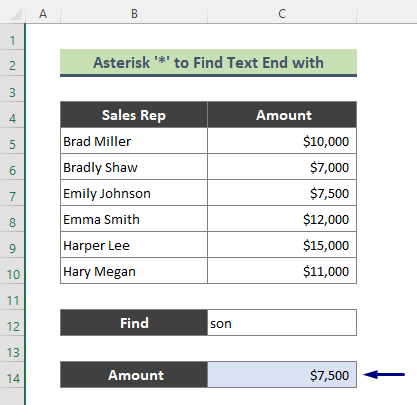 Here, “*”&C12, this part of the formula results *son. That means the above formula will look for the names ends with the text value *son (such as son, Johnson, Richardson). The rest of the formula works as mentioned in Method 1.

3. Two Wildcards in VLOOKUP to Get ‘Contains Type’ Partial Match in Text

In the previous two methods, I have shown how to find text that begins/ends with a certain text value. Now, I will look if any of the sales representative’s names contain the text ‘Me’ at any position and thus find out the sales amount. 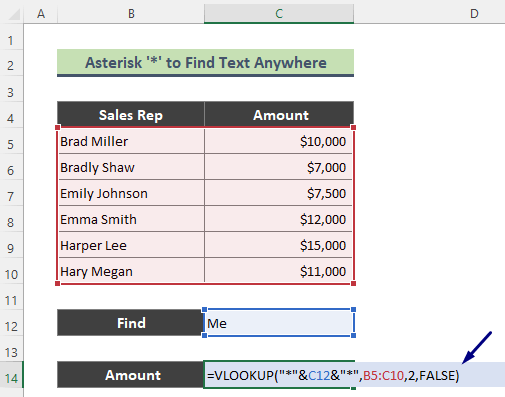 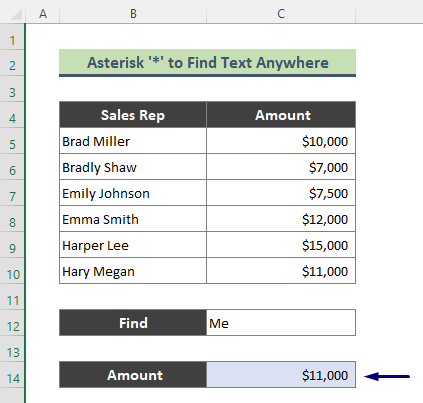 Here, “*”&C12&”*”, this part of the formula results *Me*. It means the above formula will search in the lookup column if any of the names contain the text ‘*Me*’.

This time I will partially match multiple texts. For example, I have the below dataset, containing Sales Rep, Selling Item, and Sales Amount. 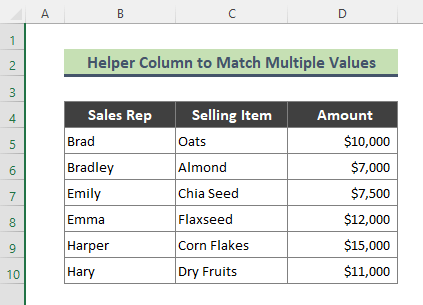 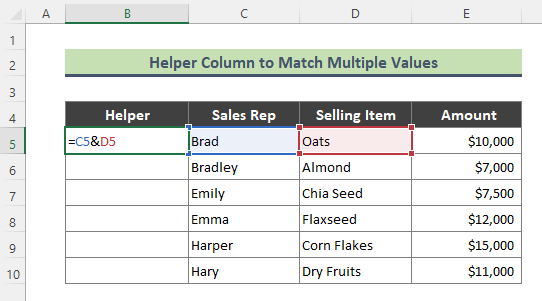 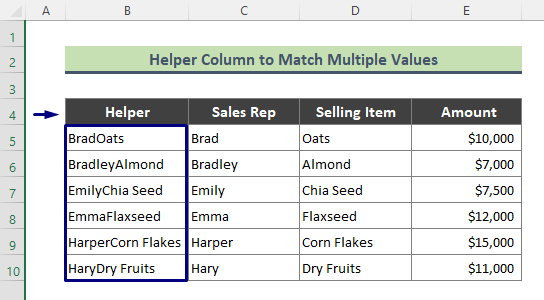 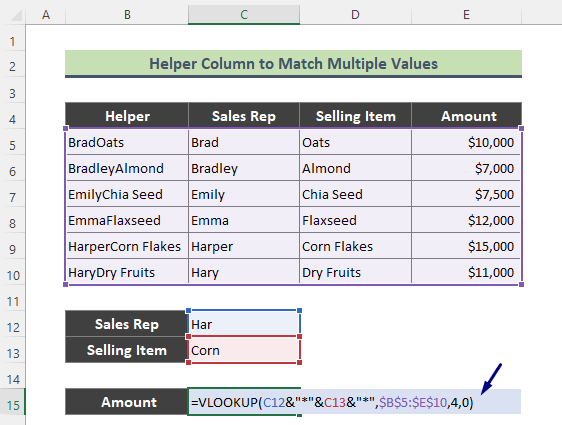 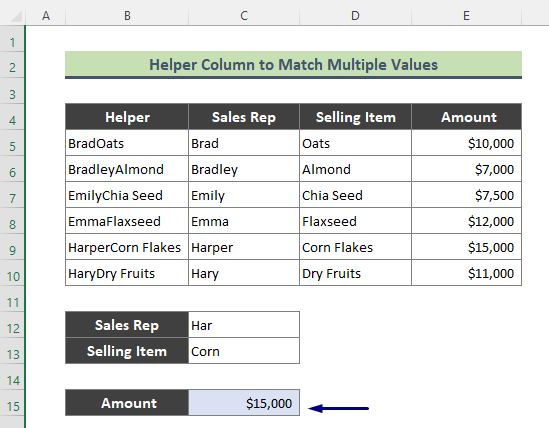 Alternatives of Vlookup to Get Approximate Match for Text

Other than using the VLOOKUP function, we can use some other options to match texts partially. For instance:

Microsoft has a free add-in used for Fuzzy Lookup. Fuzzy Lookup is similar to approximate lookup.

In the above article, I have tried to discuss several examples of VLOOKUP approximate match text in excel elaborately. Hopefully, these examples and explanations will be enough to solve your problems. Please let me know if you have any queries.