Let’s say we have a dataset where Distance covered by different participants at a marathon is given. There are some spaces at the end of each Participant Name and the cells in the Distance Covered column have the numerical values as well as the unit- miles. Now we will trim the spaces and the characters which indicate the unit from the right. 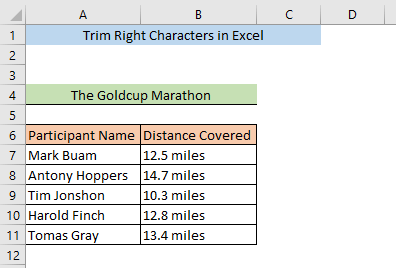 1. TRIM function to Remove Extra Spaces From the Right

Sometimes your data cells may have extra spaces at the right end. We can use the TRIM function to remove these spaces.  As we mentioned, there are some spaces at the end of each Participant name, 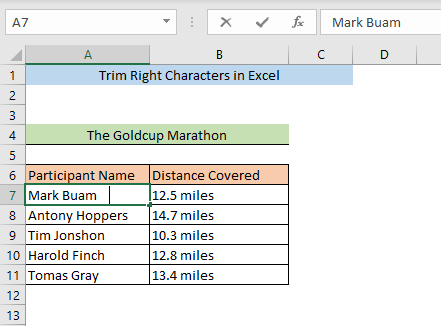 To remove these spaces, type the following formula in an empty cell (C7)

Here, the TRIM  function will remove the spaces from the right end 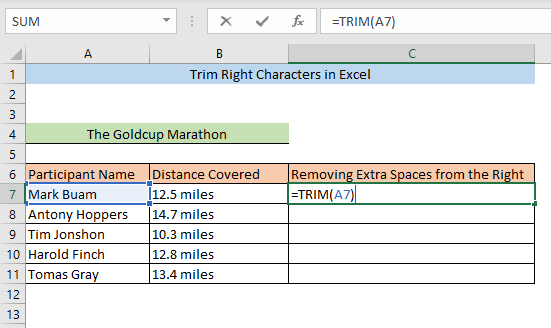 Press ENTER to remove all the extra spaces. 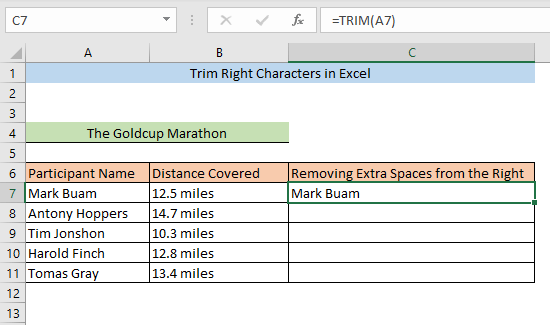 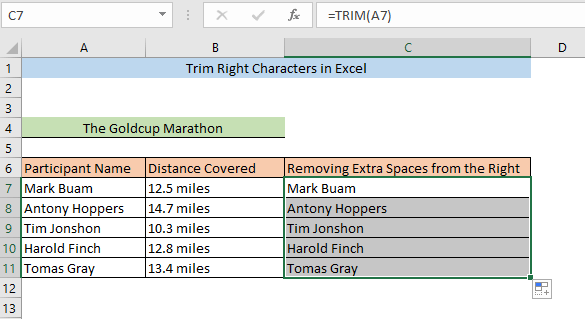 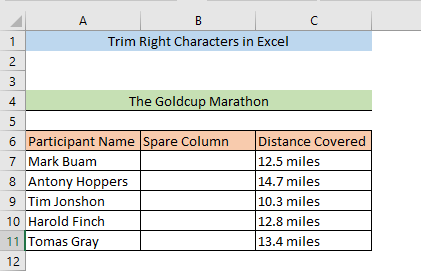 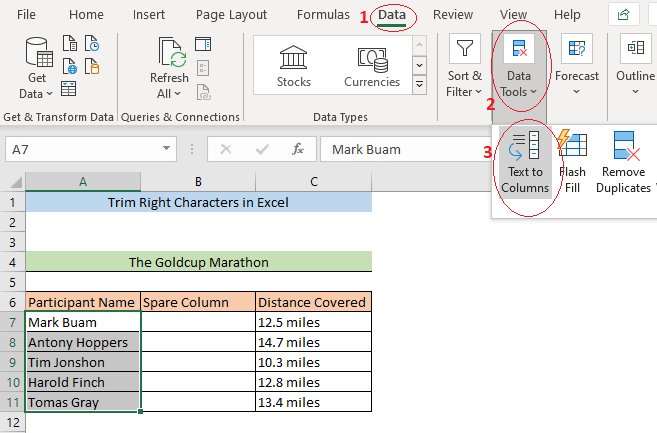 Now a Text to Column Wizard window will appear. Select Fixed Width and click on Next. 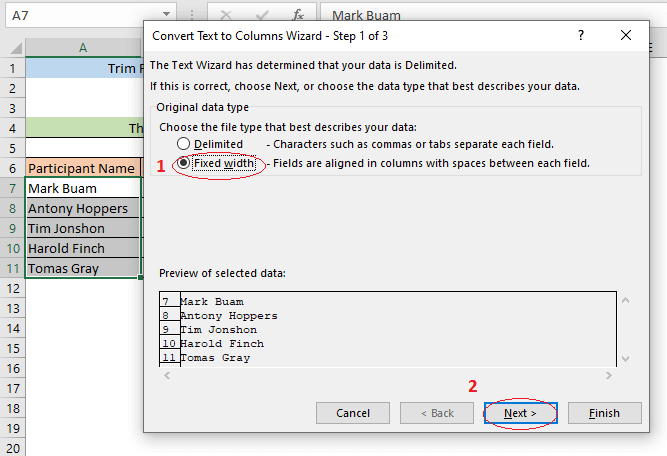 In the second step, move the vertical line beside your data to the end of your data and select Next. 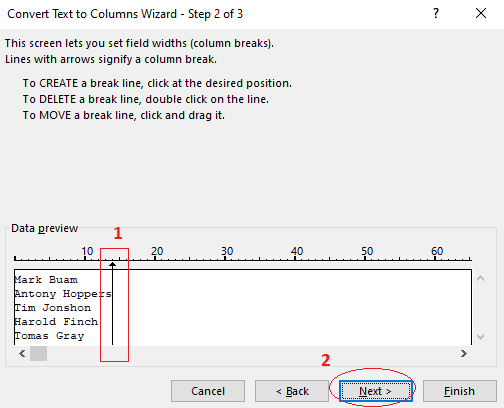 Now you will see, all of your data is highlighted with black color. Select Finish. 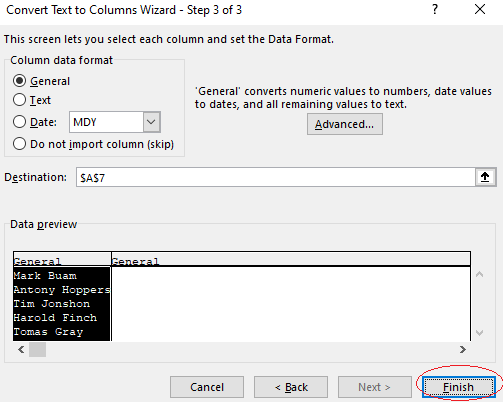 After that, a confirmation window will appear. Press OK. 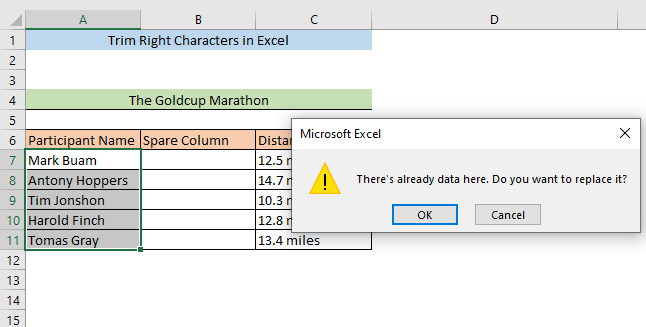 Now you will see, there are no spaces to the right end of your dataset. 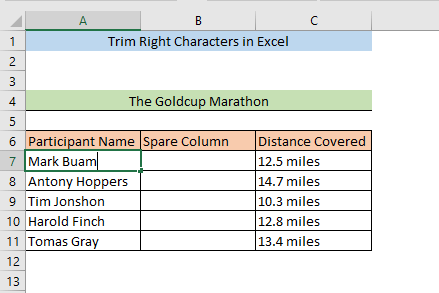 With a combination of the LEFT function and the LEN function you can easily trim right characters from your data cells. Type the following formula in an empty cell (C7), 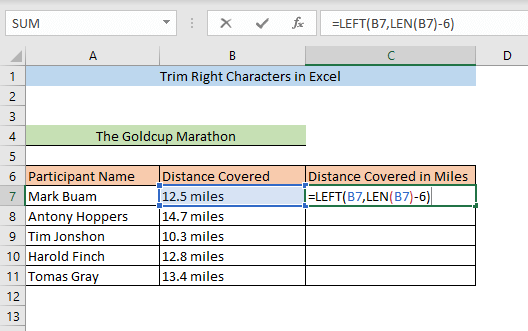 Press ENTER and you can see the right characters which are miles for our dataset have been removed. 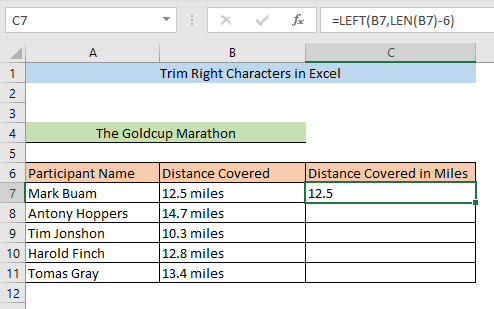 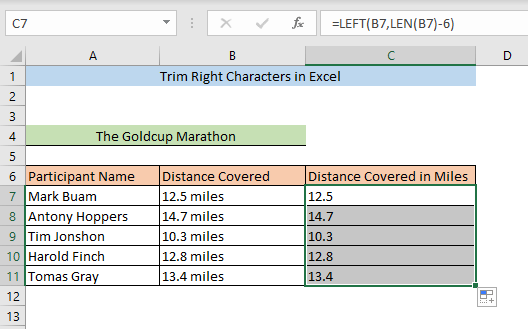 Here, the VALUE function will convert the return of the LEFT function into numeric values. 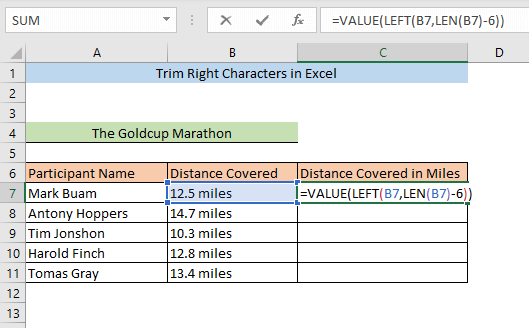 Press ENTER. You will see the formula has trimmed the right characters. It will also show the return on the right side of the output cell, C7 which indicates the return is a numeric value. 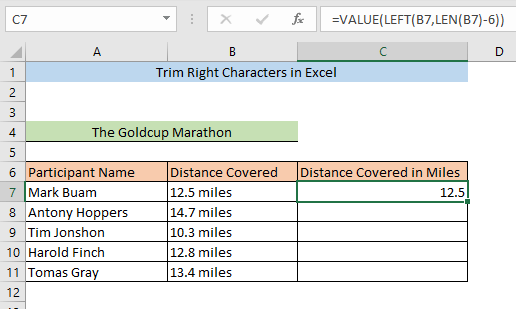 Drag the C7 cell to apply the same formula in all other cells. As a result, you will get the distance covered without the unit miles in numeric formats at the output cells for all of the participants. 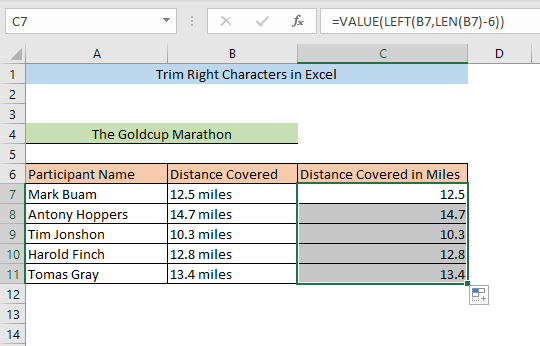 Another way to trim the right characters in Excel is making a custom function using Visual Basic Applications (VBA). First press ALT+F11, it will open the VBA window. Now right click on the sheet from the left panel to open a dropdown menu. Expand Insert by clicking on it and selecting Module. 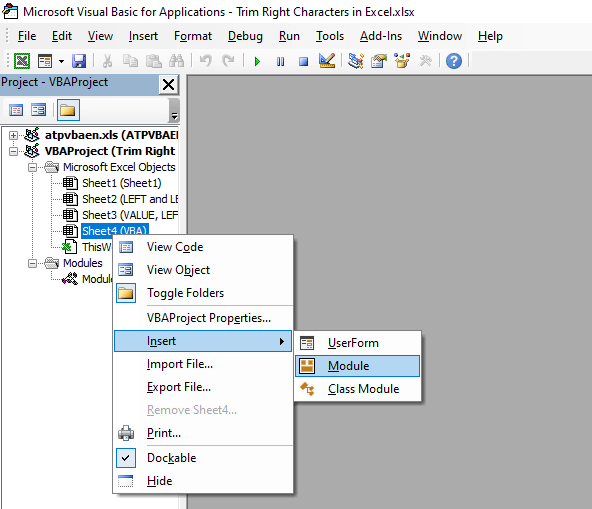 It will open a Module(Code) window. 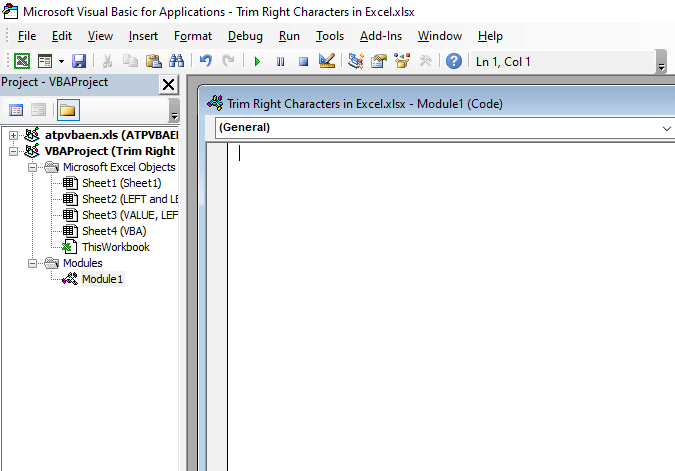 Insert the following code in the Module(Code) window.

The code will create a custom function named TRIMLASTX which will trim a defined number of characters from the right side of the selected cell. 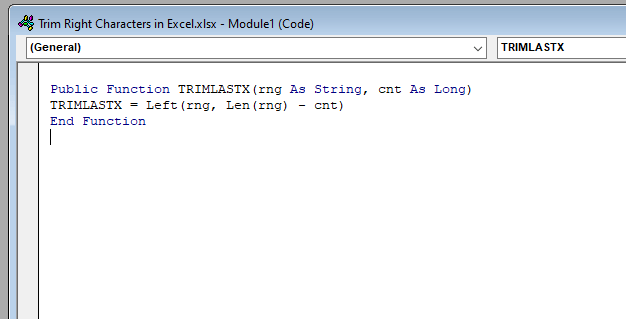 Now close the VBA window and type the following formula in cell C7,

Here, B7 is the selected cell and 6 indicates the number of characters which will be removed. 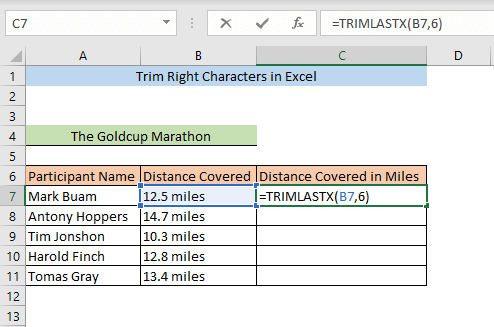 Press ENTER and you will see the formula has trimmed the right characters. 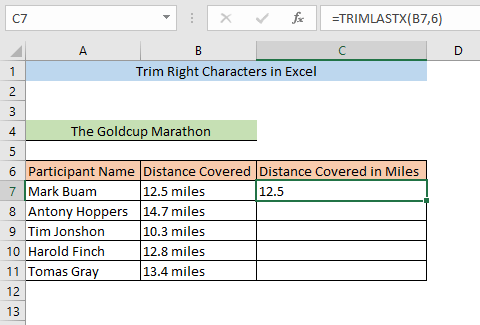 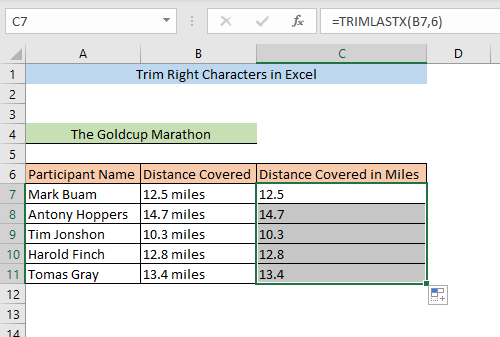 You can trim characters from the right in Excel by any of the above methods. If you face any kind of confusion, please leave a comment.

How to Create Permutation Table in Excel (4 Easy Methods)

How to Calculate Double Declining Depreciation in Excel

How to Get Remainder in Excel (3 Simple Methods)

How to Insert Lowercase Delta Symbol in Excel (5 Easy Methods)