How to Remove Hidden Double Quotes in Excel (6 Easy Ways)

Every now and then we import data from external sources in Excel. In doing so, we come across various inserted characters among entries that cause miscalculation problems in Excel. In this article, we discuss one of the most common pre-existing characters among entries, Double Quotes. We use multiple Excel Features, functions such as SUBSTITUTE, INDIRECT, and MID as well as VBA Macro Code to remove hidden Double Quotes.

In a scenario, we have Employee Name and Address in a dataset. There are hidden Double Quotes in the entries however for better representation and understanding we are showing the Double Quotes explicitly. 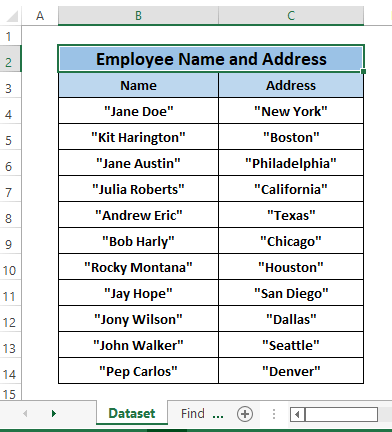 Excel’s Find and Replace feature finds any character you ask to then replaces it with whatever character you command to. Though we keep the Double Quotes explicit for better understanding, it can be used whether Double quotes are hidden in formulas or anywhere in the worksheet. 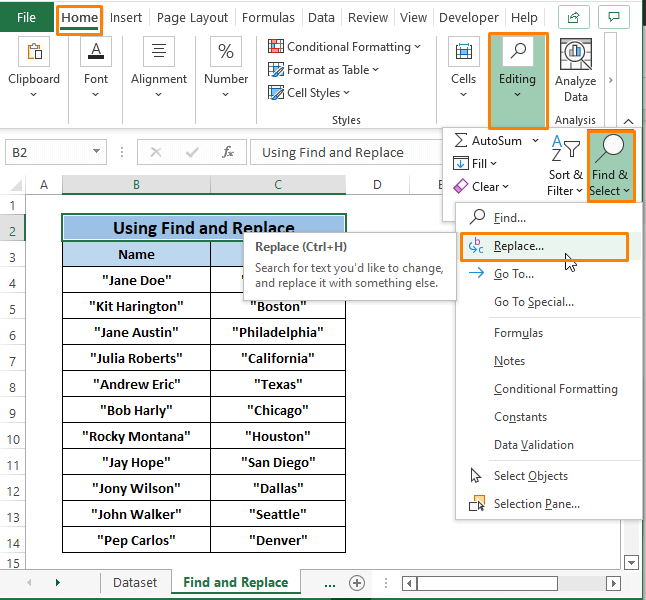 In the Find and Replace window,

in Find what command box Insert Quotation Sign (“) and Keep the Replace with command box Empty. Keep other selections Default.

Click on Find All. It’ll show all the entries containing Quotation Signs underneath the Command icons. 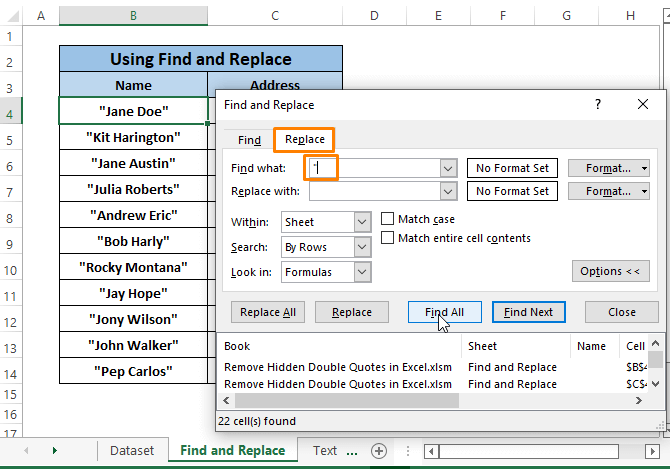 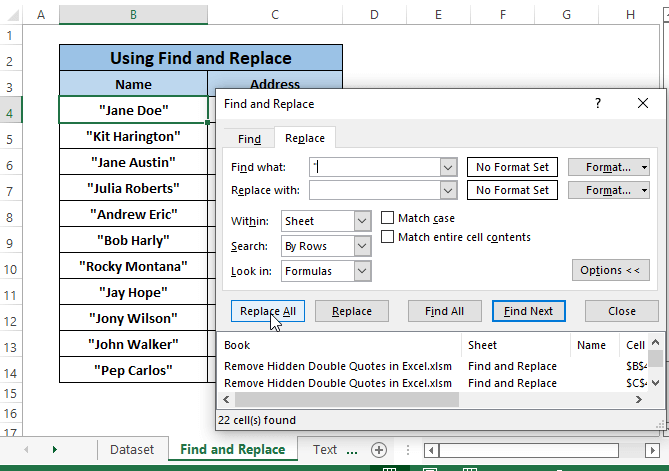 Step 4: A confirmation window opens up saying it has made replacements. Click OK. 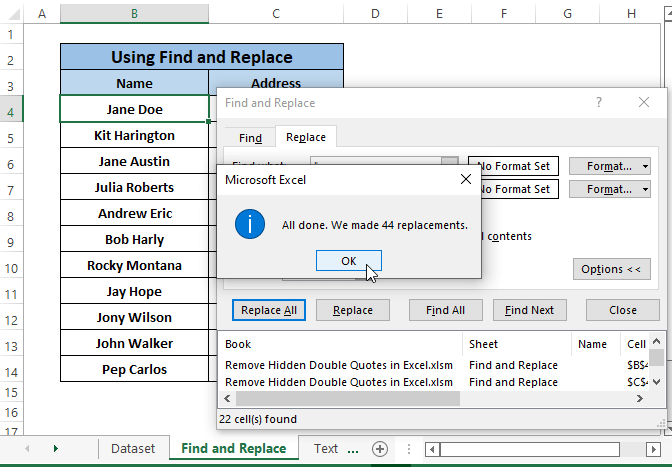 The execution of steps removes all the Double Quotes from the entries. The consequences look like the picture below. 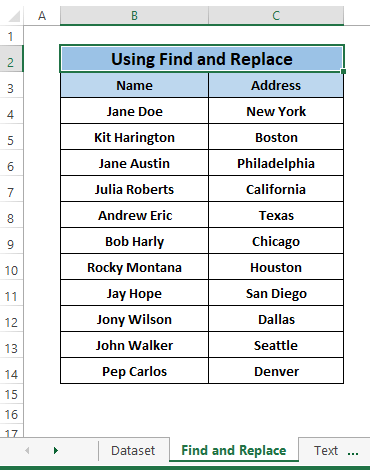 Read More: How to Remove Characters in Excel (6 Methods)

Excel’s Text to Column feature transforms texts with specific delimiters you choose to. In this case, we use Space as a delimiter to replace it with Double Quotes. 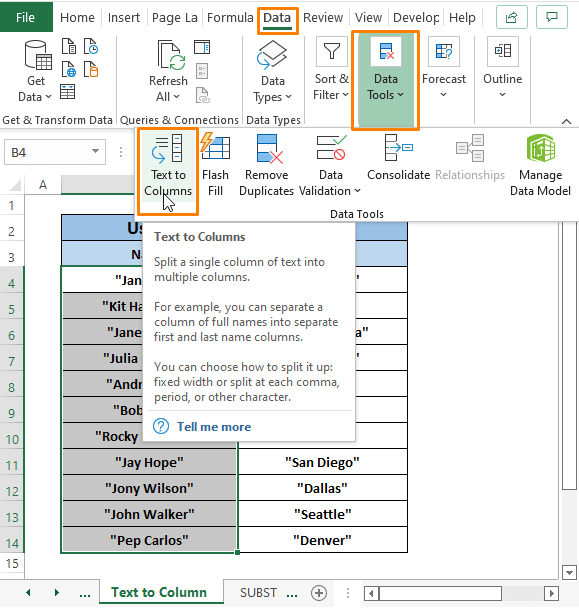 Step 2: Convert text to Columns Wizards Steps 1 of 3 window appears. Choose Delimited as Choose the file type that best describes your data. Click on Next. 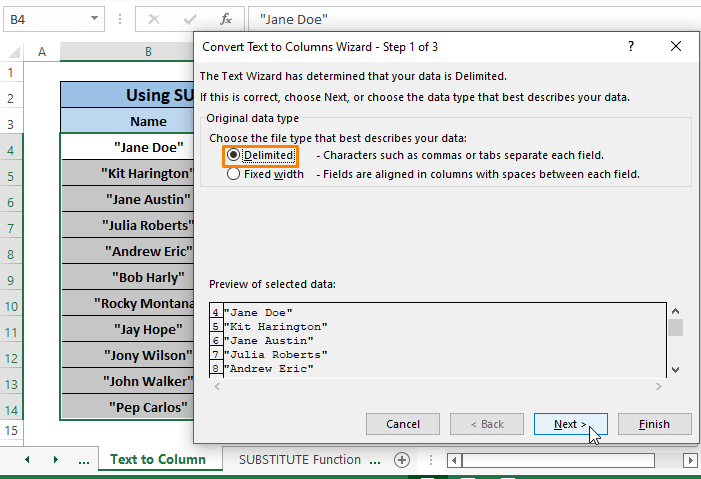 Step 3: In the Convert text to Columns Wizards Steps 2 of 3 window, Checked Space as Delimiters (you can proceed without selecting any delimiter, that will also work). Click on Next. 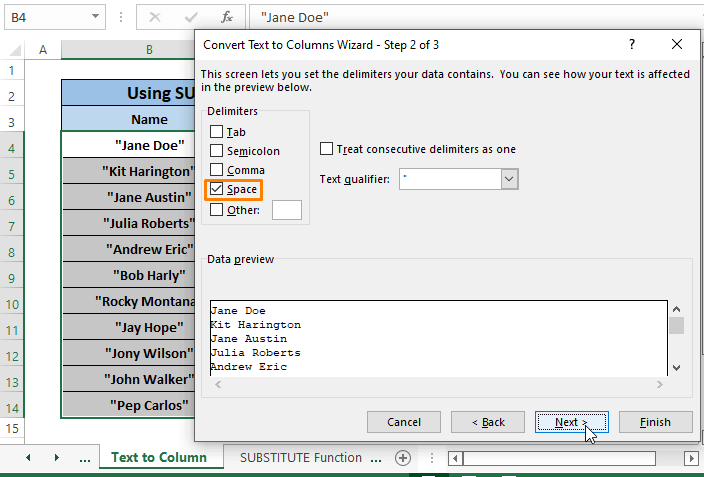 Step 4: At last, in the Convert text to Columns Wizards Steps 3 of 3 window, Select Column data format as Text. Click on Finish. 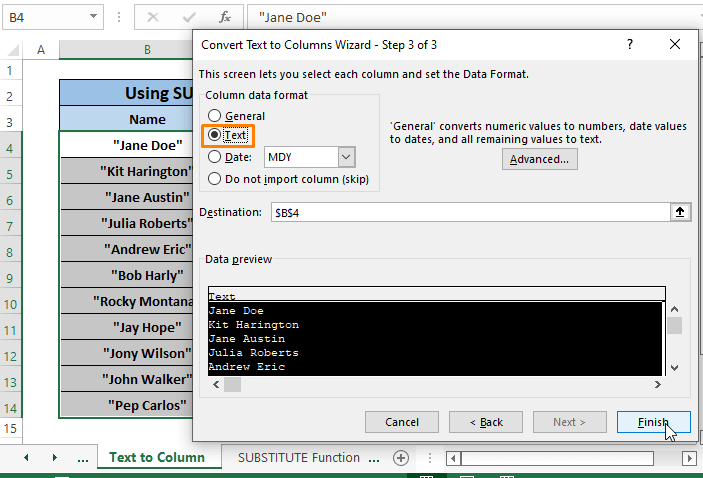 Following all the steps removes Double Quotes from all the selected cells similar to the following image. 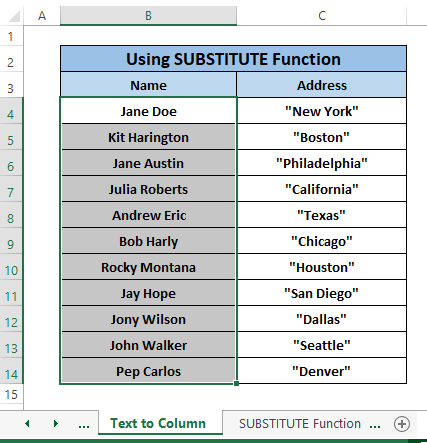 Repeat Steps 1 to 4 for Column C (i.e., Address Column) to come up with a similar result to column B (i.e., Name Column). 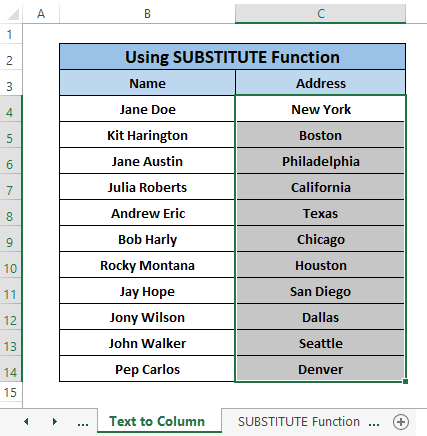 You can see all the Double Quotes disappear.

Read More: How to Remove Single Quotes in Excel (6 Ways)

old_text; is the text or character to replace within the text.

new_text; is the text to replace with.

[instance]; are the instances the formula replaces old_text with new_text.

We keep [instance] as default.

CHAR(34) is the ASCII code for Double Quotation. 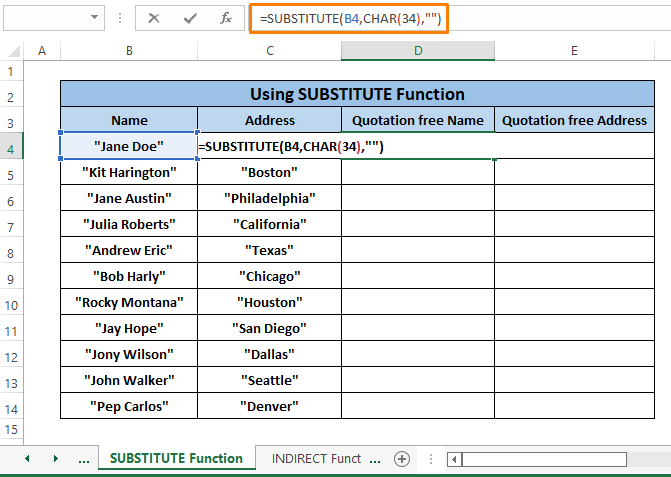 Step 2: Press ENTER and Drag the Fill Handle to bring out all the Names without Double Quotes. 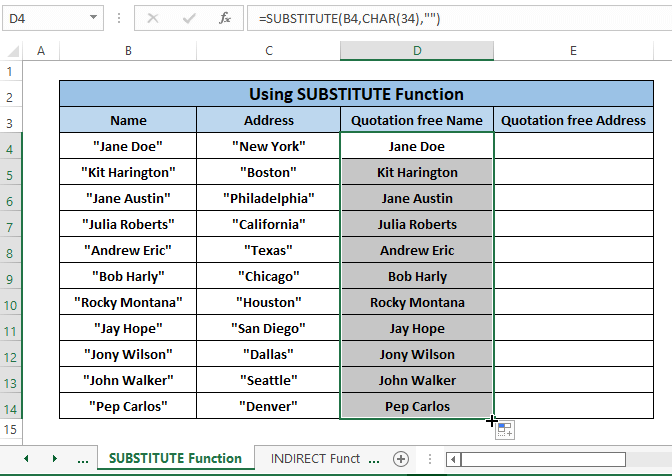 Repeat Steps 1 and 2 for Address Column and the consequences will be the same as the following picture. 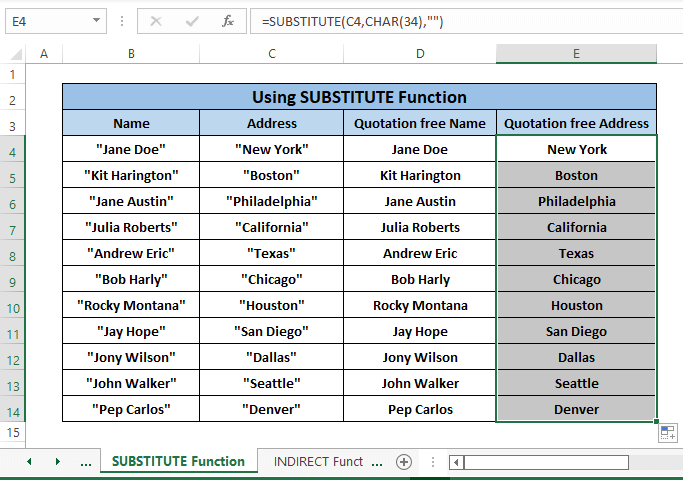 Related Content: How to Remove Spaces in Excel: With Formula, VBA & Power Query

a1; delivers the logical argument.

As we just removing Double Quotes, we don’t need any logical argument(i.e.,a1). 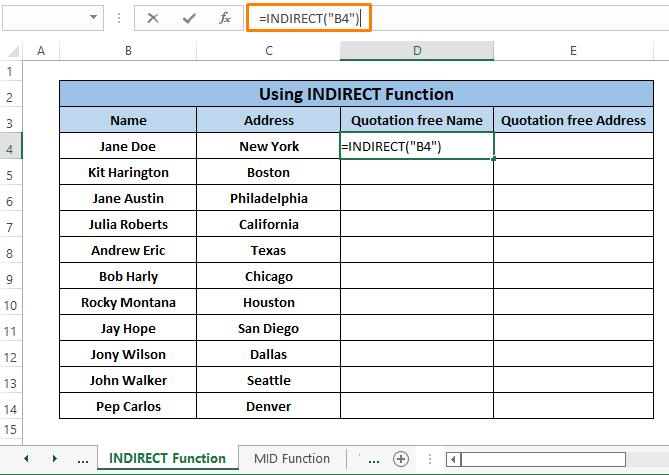 Step 2: Hit ENTER. You’ll get an outcome similar to the image below. 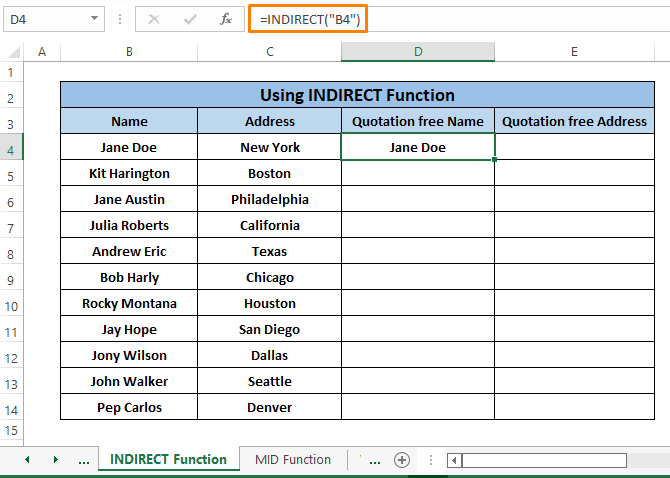 In this method, you have to Insert the formula for each cell. It’s a hideous job. if you have a handful of data, you can use it unless I’ll not encourage you to use it.

Follow Steps1 and 2 for each cell then the result will be the same as the image below. 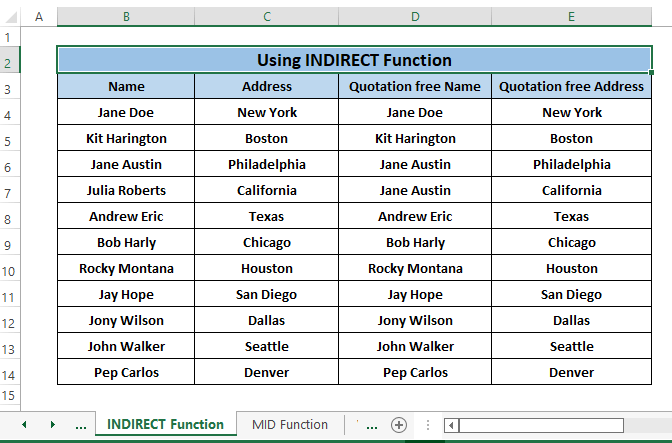 Read More: How to Remove Special Characters in Excel (4 Methods)

text; is the cell reference you want the characters to extract from.

start_position; is the position within the string you start to extract from.

number_of_characters; is the number of characters from the text you fetch.

2; is the start_position, as we want the first character quotation to be removed.

8; is the number_of_characters to extract totally depends on the individual strings. 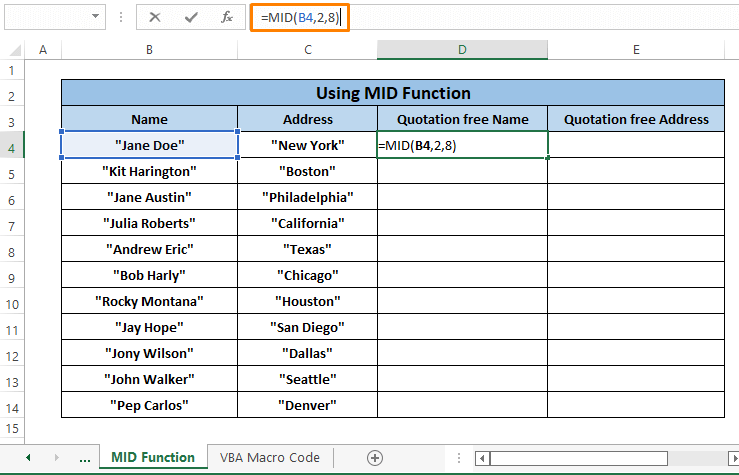 The name “Jane Doe” has a total of 10 characters including the Double Quotes. We start fetching characters from character number 2 and then extract a total of 8 characters removing both Quotes on both sides.

Step 2: Press ENTER. The name appears as Double Quotes fewer entries similar to the image below. 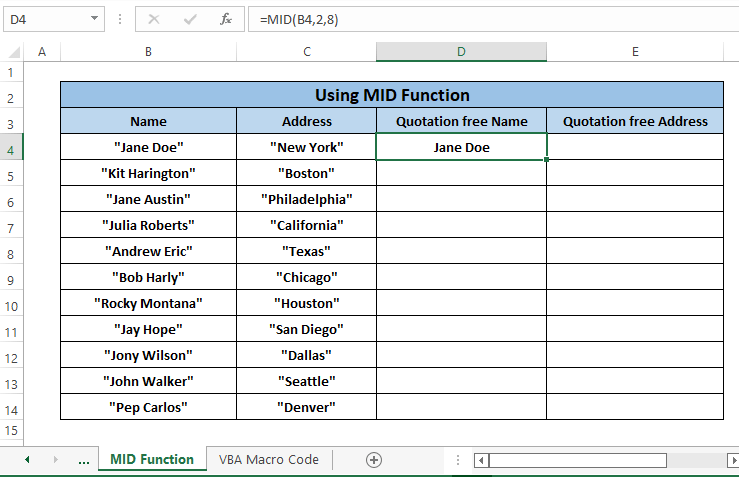 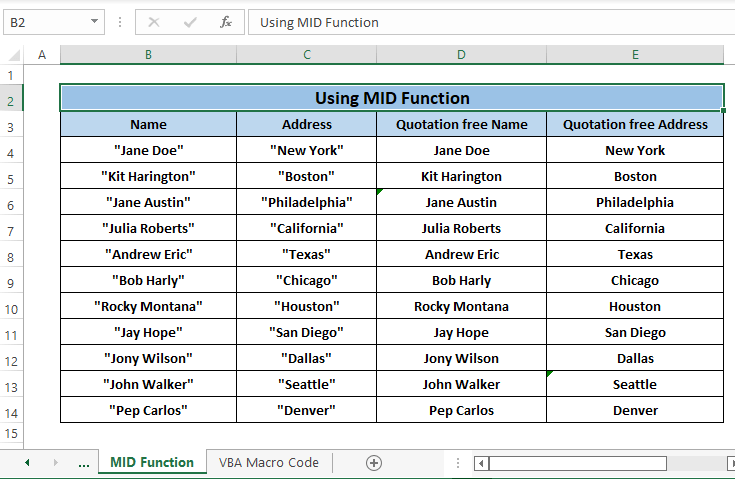 VBA Macro Code is a very effective tool to achieve a result with less effort. In this case, we can use a couple of lines of VBA Macro Code to remove Double Quotes from any selection.

Step 1: Select a range of cells you want to remove the Double Quotes from. 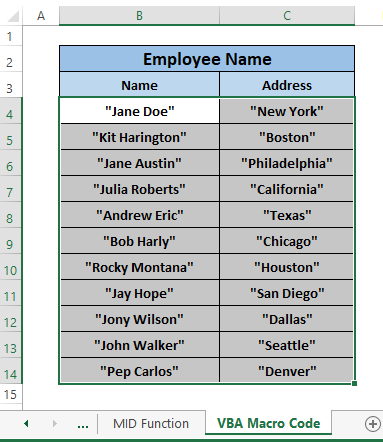 Step 3: In the Module, Paste the following Macro Code. 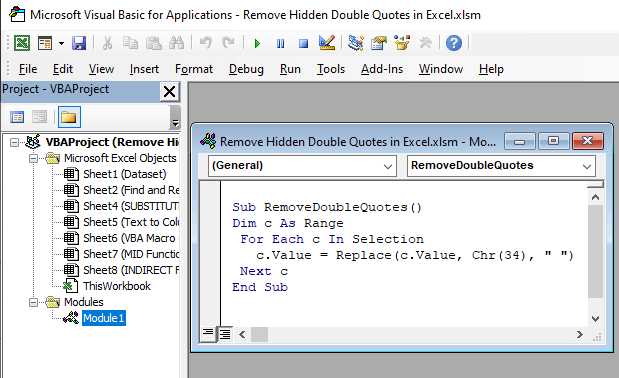 Using the code we apply the formula c.Value to the selection of the worksheet to Replace all the Char(34) (i.e., Double Quotes).

Step 4: Press F5 to run the Macro Code. Back to the worksheet, you’ll see all the double quotes from the entries are removed. 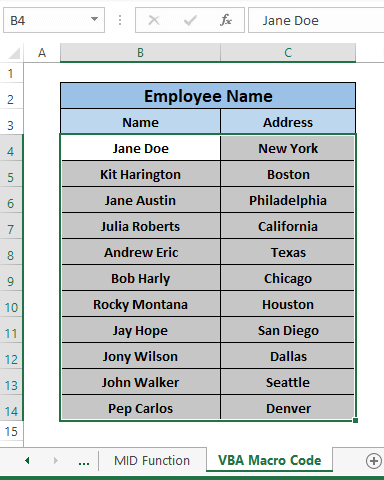 In the article, we use Excel’s features, functions, and VBA Macro Code to remove Hidden Double Quotes. For better representation and understanding, we showed the Double Quotes and applied the methods which can remove both explicit and implicit representations. Find and Replace and Text to Column features are handy to work with. The INDIRECT and MID function works for a cell at a time not allowing auto removal. However, the SUBSTITUTE function removes Double Quotes with ease. And the most effective of them all is the VBA Macro code. Hope above discussed methods satisfy your quest. Comment, if you have further queries and have something to add.

How to Use Drawing Tools in Excel (2 Easy Methods)

[Fixed!] Undo and Redo in Excel Not Working (3 Simple Solutions)

How to Zoom When Zoom Slider Is Not Working in Excel

How to Zoom in on Excel Map Chart (5 Easy Methods)