Relative Cell Reference in Excel is one kind of cell reference where the referred cell changes when it is copied, moved or used in an array. It is a very useful feature of Excel and provides great help when you need to apply the same formula over a range of columns or rows. In this article, I will discuss everything you need to know about relative cell reference with example.

How to Make a Cell Reference Relative

When you put the Dollar sign only before the column number you will get relative row reference with the absolute column. It means when you drag the cell, only the row of the selected cell will change, the column will remain unchanged. It will look like $B4. When you want to change the row but want to keep the column constant you can use relative row reference with absolute column. It is generally used when you copy your data vertically.

Related Content: Relative and Absolute Cell Address in the Spreadsheet

When you put the Dollar sign only before the row number you will get relative column reference with absolute row. It means when you drag the formula cell, only the column of the selected cell will change, the row will remain unchanged. It will look like B$4. When you want to change the column but want to keep the row constant you can use relative column reference with absolute row. It is generally used when you copy your data horizontally.

3. Switching Reference of a Cell

For example, let’s use the B4 cell to demonstrate the switch operation.

1. Relative Cell Reference in a Formula

Now, let’s see how we can use relative cell reference in a formula. Consider the following examples. Here we have different principal amounts and years of deposit for different people. We want to find out how much Interest they will get for a specific interest rate.

In the formula, cells C8 and D8 are relatively referred. So, if we drag cell E8, cell C8 and D8 will change in the formula. But cell C4 won’t change because it has absolute reference. 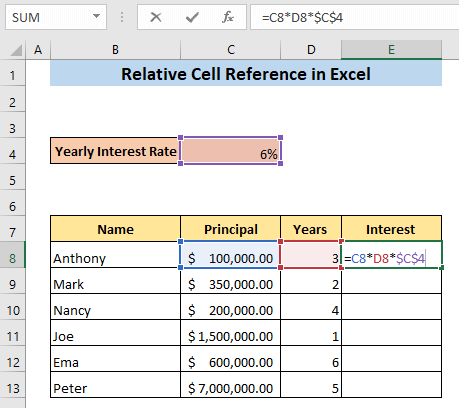 As a result, we will get the Interest for the first entry. 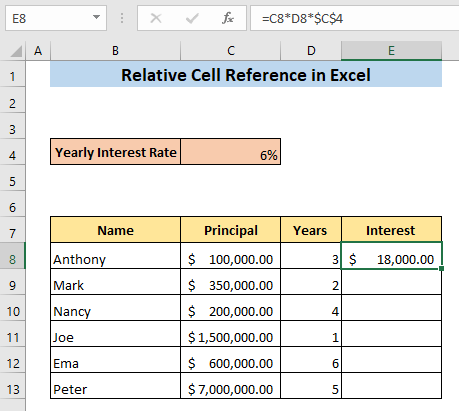 ➤ Drag cell E8 to the end of your dataset.

As a result, we will get the Interest for all of the entries. 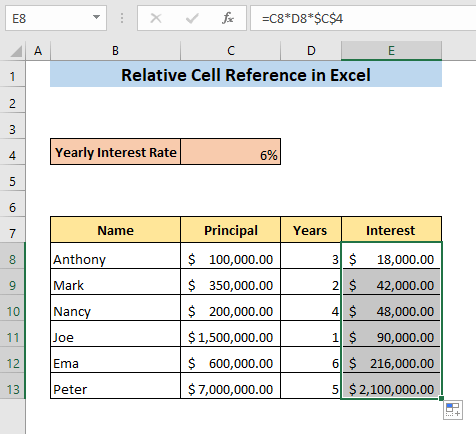 Now, if you click on any of the cells of column E except E8, you will see that the relatively referred cells have been changed in the formula bar but the absolutely referred cell has remained the same.

Related Content: How to Use Cell References in Excel Formula (All Possible Ways)

2. Relative Reference for a Range of Cells

You can also use relative references for a range of cells. Consider the following example, you want to find out the total price for pen, pencil and notebook for different customers. The unit price for those items is given in cell C4:C6. 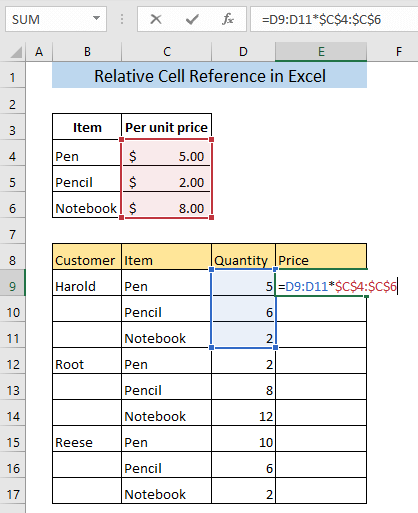 You will automatically get the value in the E10 and E11 cells along with cell E9. 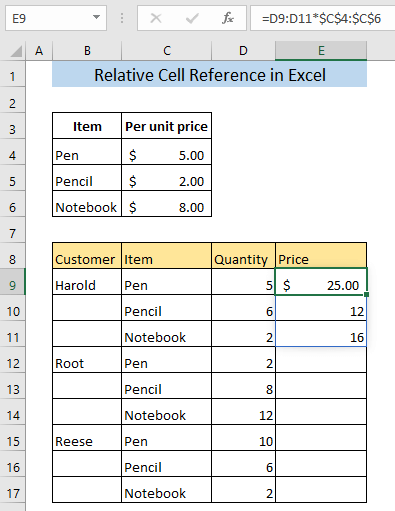 As a result, you will get the prices of the items for all of the customers. 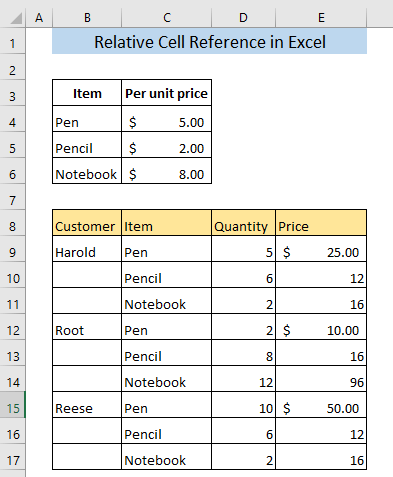 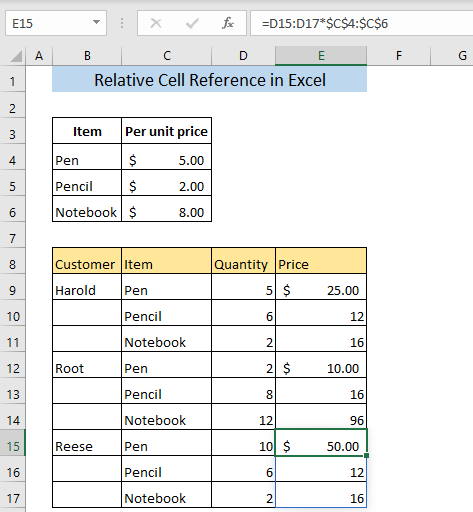 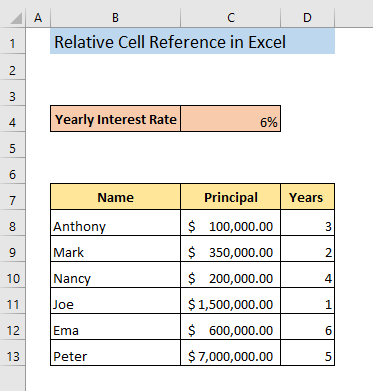 ➤ Type the following formula in cell C5 of the Interest sheet, 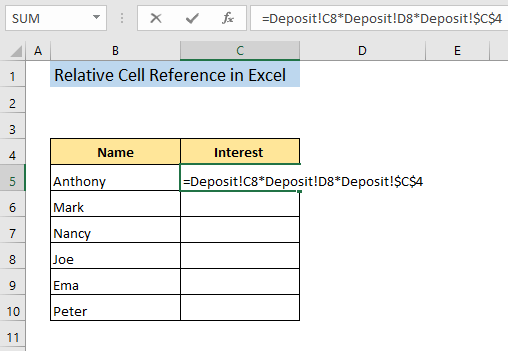 As a result, you will get the Interest for the first deposit. 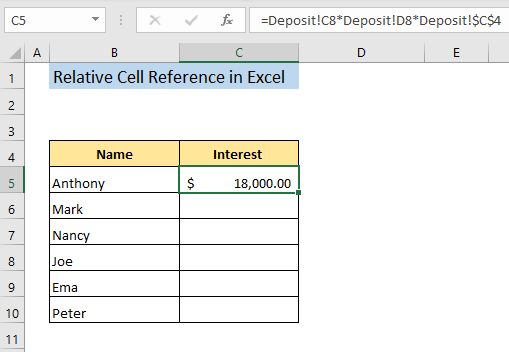 ➤ Drag cell C5 to the end of your dataset.

So, you will get the Interest for all of the deposits. 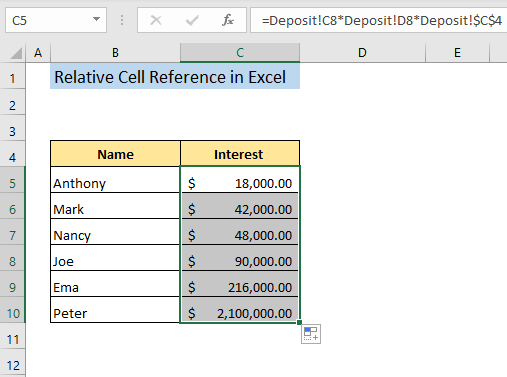 Now, if you click on any cells of column C except C5, you will see that the relatively referred cells of the other sheet have been changed but the absolutely referred cell has remained the same. 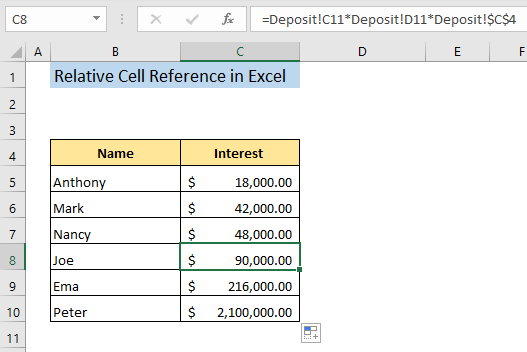 Relative cell reference becomes very handy when you have to work with a large dataset and have to apply the same formula over multiple cells. I hope you have found this article useful, understand the relative cell reference example and are ready to utilize it. If you have any kind of confusion, please leave a comment.